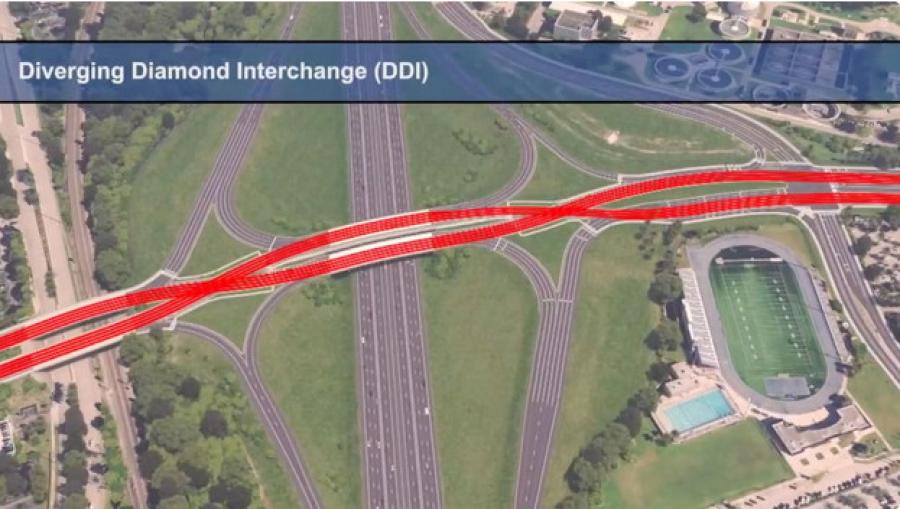 The scope of the road work includes reconfiguring the Glades Road Interchange to a Diverging Diamond Interchange. (Florida Department of Transportation rendering)

The bridge was shut down for construction in connection with express lanes on I-95, according to the Florida Department of Transportation (FDOT).

The closure is designed to help crews work safely on the interstate's express lanes from just south of State Road 808/Glades Road to south of Linton Boulevard.

The Clint Moore Road bridge over I-95 will be fully reconstructed as part of a major highway effort in southeast Florida, known as the 95 Express Phase 3B-2 project. The $148 million enterprise began in November 2019 and is slated to be completed toward the end of 2023. Its entire length is more than 5.8 mi.

The prime contractor for the road and bridge project is Tampa-based Prince Contracting LLC.

One lane will be added to I-95, and the high occupancy vehicle (HOV) lane will be converted to create two express lanes in each direction; the number of general use lanes will remain the same.

The overall project will result in completely reworked entrances to the interstate at the Glades Road interchange and entrances and exits to the express lanes between Glades Road and Spanish River Boulevard as well as another between Yamato Road and Linton Boulevard.

On Clint Moore Road, bridge reconstruction will make room for the expanded express lanes below and include seven-foot bike lanes and expanded multiuse paths over the freeway, according to the city officials.

"FDOT's work to replace the bridge [in] a shorter time will lessen the inconvenience of a closure that would otherwise be much longer," said Boca Raton Mayor Scott Singer. "The bridge will remain open at all times to emergency vehicles."

In addition to the Clint Moore Road overpass, the FDOT is overseeing the reconfiguration of the I-95/Glades Road junction to a Diverging Diamond Interchange (DDI). Additional project improvements include overhead sign structure installation, Intelligent Transportation System (ITS) and Express Lane markers, new signalization, lighting, signing and pavement markings and ramp signalization at five interchanges from Glades Road to Linton Boulevard.

Shoulder-mounted sound barrier walls will be constructed along I-95 northbound between Clint Moore Road and Linton Boulevard, ground-mounted sound walls will be installed on the south side of Yamato Road east of I-95 adjacent to the University Heights Community and along I-95 northbound south of Linton Boulevard adjacent to the Tierra Verde Community.

The Clint Moore Road Bridge is not the only one to be rebuilt on the 95 Express Phase 3B-2 project. Crews also will fully reconstruct the Glades Road bridge over the South Florida Regional Transportation Authority (SFRTA) railroad tracks and Military Trail. Additionally, widening will be performed on the I-95 bridge over the C-15 Canal (between Peninsula Drive and Linton Boulevard).