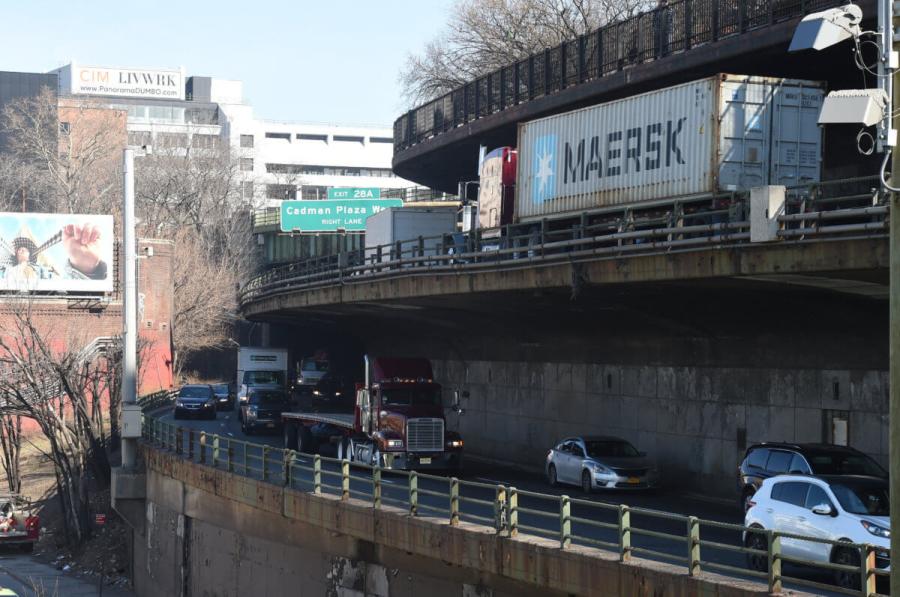 Government leaders must use new federal infrastructure dollars to demolish the Brooklyn-Queens Expressway in New York City and rebuild it to meet 21st century needs, according to an influential construction industry leader.

"I have one mission in life [on] infrastructure and that is to work with communities and create, I believe, the largest infrastructure [investment] in America," said Carlo Scissura, president of the New York Building Congress at a morning panel discussion on Nov. 10. "It's called knocking down, redesigning, and rebuilding a Brooklyn-Queens Expressway for people, for communities and for all of us in our city."

The head of the building trade advocacy group said money from President Biden's $1.2 trillion infrastructure bill, along with a new governor and a soon-to-be new mayor, will make for the perfect time to redesign the highway.

"I get out [of the subway] at Fourth Avenue, and I love Sunset Park, but then what happens, I walk down the block and the worst monstrosity in the United States," Scissura said. "It is the most ridiculous, disgusting eyesore. It's dangerous, it's polluted, it's rusted. Let's all chant, ‘Tear the BQE down, tear the BQE down.'"

A Product of Outmoded Thinking

The BQE was built under the reign of power broker Robert Moses in the 1950s, destroying several working-class neighborhoods in its path, including along Third Avenue in Sunset Park near where Scissura spoke at the recent infrastructure breakfast hosted by the Brooklyn Chamber of Commerce in Industry City.

Scissura is no stranger to the years-long discussions about what to do with the BQE, having chaired a panel convened by outgoing Mayor Bill de Blasio to study fixes for the roadway's decaying triple-cantilever section wrapping around Brooklyn Heights. Their action came after locals rebelled against the city's proposal to run a temporary six-lane highway on the beloved local promenade during renovations.

"We had no money three years ago; now we've got money and we've got a city and a state that are working together, we can actually get some incredible things done," Scissura told amNewYorkMetro.

A White House fact sheet cites Interstate 81 in Syracuse and the Clairborne Expressway in New Orleans as prime examples of highways that cut through poor communities of color. But there are also several examples in the Big Apple, such as the BQE, which is part of Interstate 278, and the Cross Bronx Expressway.

A report from amNewYorkMetro noted that funding for the initiative was whittled down from an original $20 billion during negotiations in the Senate, but the U.S. Department of Transportation said it will still reconnect as many as 20 communities across the country by removing parts of interstates and repurposing former rail lines.

"If a highway was built for the purpose of dividing a white and a Black neighborhood or if an underpass [would have been] constructed such that a bus carrying mostly Black and Puerto Rican kids to the beach in New York was designed too low for it to pass by, that obviously reflects racism that went into those design choices," Buttigieg said to the White House press corps.

Support Coming from All Sides

Meanwhile, Senate Majority Leader Chuck Schumer, Bronx Congressmember Ritchie Torres, and city Department of Transportation (NYC DOT) Commissioner Hank Gutman rallied in Parkchester on Nov. 9 calling for the infrastructure funds to be used to cap the trenched roadway that cuts through the borough, followed a day later by the city's incoming Mayor, Eric Adams, voicing support for improving that thruway and the BQE.

"We do need to really roll back the Robert Moses division of our city and reunite neighborhoods and communities," Adams remarked to WNYC Public Radio. "One solution will solve a multitude of problems: you cap it, you bring communities together, [you get] green space."

The renewed attention for the highways came as a blessing to the head of the Brooklyn Heights Association, a storied civic group that has been battling the BQE since Robert Moses first proposed building it through the neighborhood almost 70 years ago.

"There finally seems to be a moment where, hopefully, the state and federal government are working together for the benefit of the city," BHA Executive Director Lara Birnback told amNewYorkMetro.

"The relationship between New York City and Albany is in a better place than it's been for a long time to make progress on this," she added. "The communities are ready, willing, and able to be a partner on this work with the city, state, and federal officials."