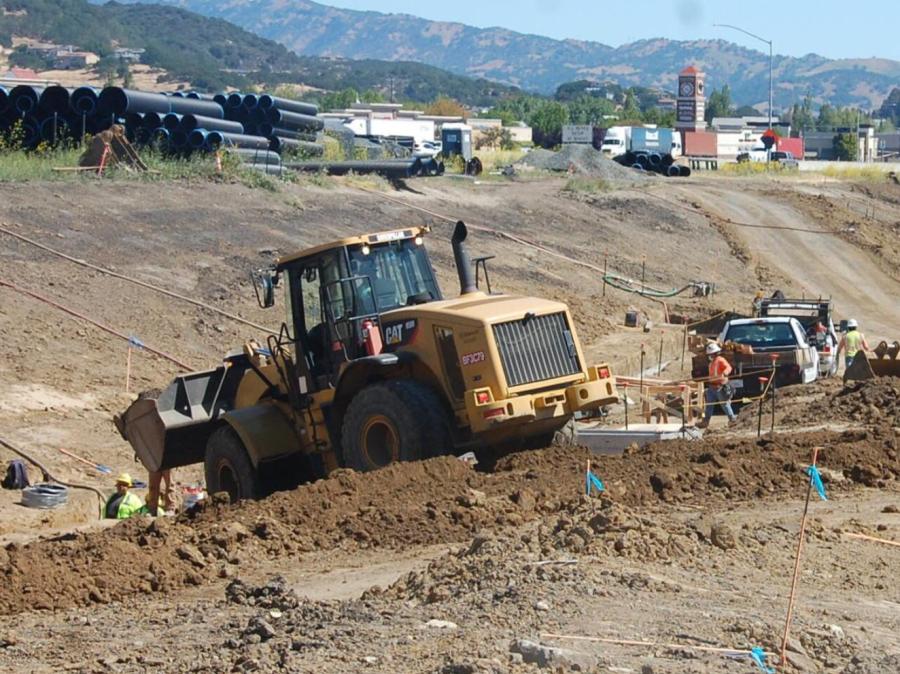 Started in October 2020, the $61 million I-80/I-680/SR 12 Interchange Project: Package 2A will be delivered in December 2022 as crews from Kiewit Infrastructure West Co. are making considerable progress on the project that will reduce congestion and improve safety at a critical interchange in Solano, Calif.

Overseen by the California Department of Transportation (Caltrans), the Interstate 80, Interstate 680 and State Route 12 Interchange Project: 2A will improve and widen the eastbound SR 12 (EB SR 12) to EB I-80 connector on the I-80 corridor, as well as improve the connectivity between regionally significant destinations. 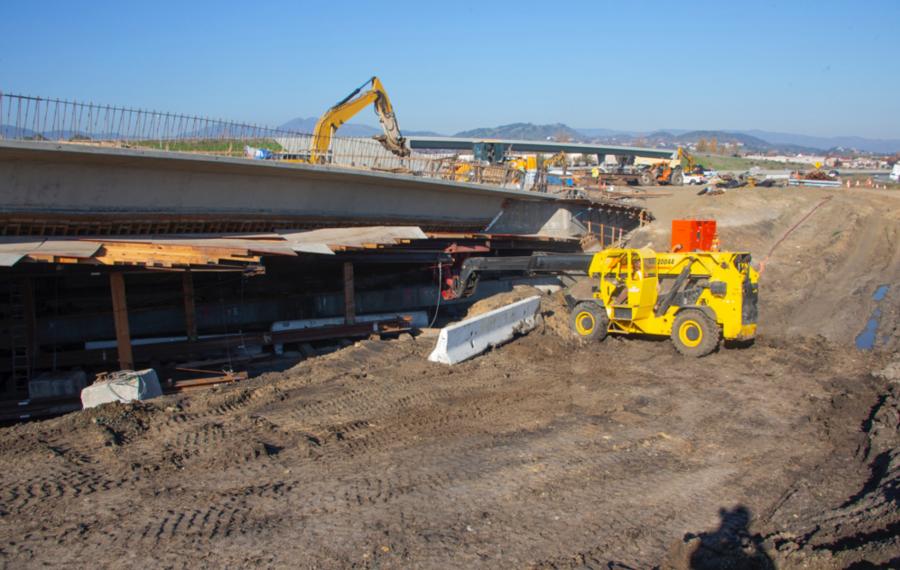 "The I-80/I-680/SR 12 Interchange is a multi-year, multi-phase project located in Solano County," said Pedro Quintana, a Caltrans public information officer of District 4. "This project includes Package 1 through Package 7, each to be constructed under separate contracts subject to funding availability.

"Package 2A is the second of seven packages improving the distribution of three major freeway movements at this interchange by reconfiguring the ramps and access to local streets," said Quintana, who noted that the majority of the funding is provided by Senate Bill 1 (SB1) Trade Corridor Enhancement Program (TCEP) funds, as well as money from State Transportation Improvement Program-Regional Improvement Program (STIP-RIP) and local Bay Area Toll Authority (BATA) Bridge Toll Funds.

Kiewit crews have completed the Highway 12 widening to two lanes; built the new two-lane bridge on Highway 12 that crosses over I-80 and demolished the old one-lane bridge after the traffic switch; constructed a smaller bridge structure that will ultimately provide access from Highway 12 to eastbound I-80 and built numerous ramps and interchange ramps.

"What remains to do is continue to build ramps off I-80 to Green Valley and I-80 South that will eliminate the weaving zone at these interchanges and improve public safety and also tie-in both lanes on Highway 12 that will eliminate congestion on it and make it a two-lane highway all the way into I-80," said Zach Reilly, Kiewit's project manager. "Highway 12 is currently one-lane eastbound. A big part of the project is to make it two lanes and part of the job is to provide additional ramps and separate traffic movement at I-80, I-680 and Highway 12 that all come together. This job will allow them to separate the traffic movement and improve safety by eliminating weaving in that zone."

The project has many challenges, but many of them were dealt with prior to the start of construction via Construction Manager/General Contractor delivery method. 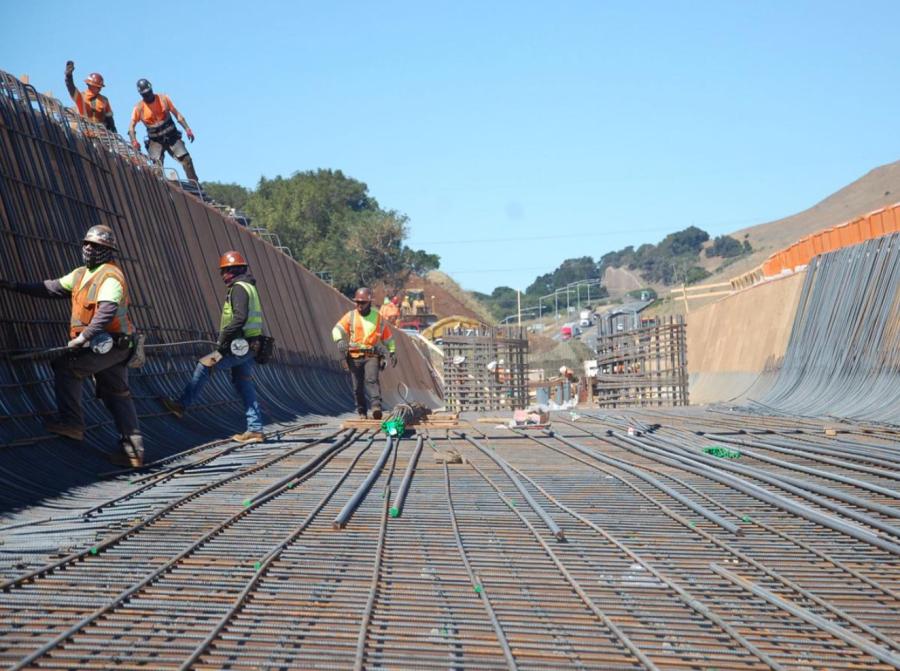 "We were brought on board during the design phase to work collaboratively with the design team from Caltrans and the STA," said Reilly. "This helped with utility conflicts, access to the work zone and staging and phasing of the work to minimize the impacts to the traveling public. We worked together to come up with six separate stages and phases to not only reduce traffic impacts, but build the new infrastructure efficiently and safely, separated from traffic as the work takes place at the intersection of three major highways. It was a team effort that allowed us to come up with a good plan."

While the crew have plenty of space in some areas, it can be tight in others, especially where the work is adjacent to a railway line and in between a railroad bridge and one for motorists.

Operations are primarily via day shifts. "Although, we do work at night on critical operations such as bridge demolition and installing falsework," said Reily, who noted that this work often involves partial lane closures. Much of the night work is focused on Highway 12 and I-80.

"It is one big spread out site with most of the major work focused on drainage, utilities, structured sections of roadway, building bridges and putting in overhead sign structures," said Reilly. ‘It's a lot of different scopes as it is a phase-to-phase project and you need to complete the work in an area or region as much as possible while you have access to it before moving onto the next one. This has been a fun job to be part of because the owners have been some of the best partners I have worked with — they are true partners and we have great relationships with Caltrans and the STA. The project is on schedule and we'll come in under budget.

"We had our challenges with the pile driving," he added. "It didn't go as planned initially, but the team came together and came up with great solutions, being able to mitigate the impact and move the job ahead and stay on schedule. It's a big project and you're going to find unknown or unique aspects that are unforeseen."

The bulk of the work is based on building new structures, including the two big concrete, cast-in-place box girder bridges, one of which was built over active traffic on I-80 that had a falsework system below it.

"The bridge construction proceeded very well and we did a good job of managing it," said Reilly. "We also have large MSE wall structures to protect the railroad infrastructure. They were up to 40 feet tall and 700 feet long and we were allowed to bank a bunch of materials adjacent to the railroad."

The demolition operations had their challenges. Origianlly, two eight-hour weekend closures were planned via the contract.

"We worked collaboratively with Caltrans and the design group and proposed to do it on one weekend with a 10-hour closure," said Reilly. "Caltrans secured us two more hours on a Saturday night/Sunday morning and we demolished the entire 500-foot long box girder bridge over I-80 and dropped the whole thing down. We placed two feet of fill on the freeway and knocked it down. We then removed it all and opened a lane by Sunday morning. It was a great success."

The goal is to build freeways with a long lifespan. 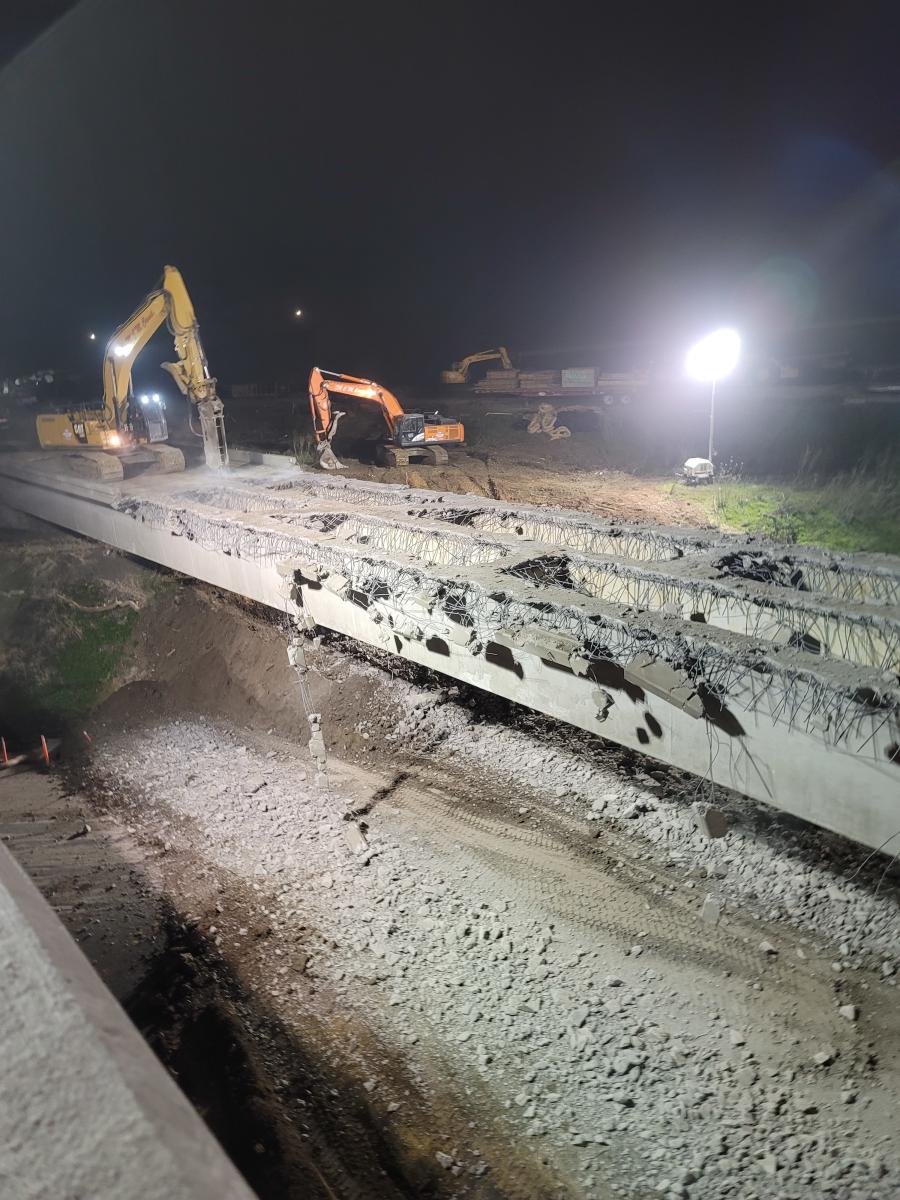 "To accomplish this, the lanes have a lime treated subbase, a concrete base of 18 inches, typical AB sections and three types of asphalt — AC, gap rated and open graded," said Reilly. "We are building very solid sections of roadway. We are expanding Highway 12 and have a bunch of new roadways of the alignment of I-80 to provide ramps and eliminate braided weaving."

The demolition had crews dealing with reinforced concrete and rebar, which was taken to local recycling centers for processing.

"The material was stockpiled on-site so that it could processed down to its components and transported by haul trucks," said Reilly.

Reilly is assisted by Brandon Risso, a project manager of Kiewit.

"Brandon has done a great job of managing the project in the field," said Reilly. "Fernando Dos Santos, Caltrans resident engineer and field manager, has been an excellent partner and really allows the project to stay on track and schedule. We are lucky in that we have good crafts people here — that's where the rubber meets the road. They have done a great job of building a quality product and knowing the project's requirement and executing a plan that was good, but improving it. Their knowledge is invaluable and in this day and age, it is really becoming more difficult to find skilled crafts and labor that really understands it."

Kiewit stated that it has on-site mechanics and is in close proximity to its yard. "Obviously we have a lot of wear and tear on the equipment when you are digging and building and running gear," Reilly said. "We have quick repairs from out mechanics, who are only two miles away."

"This section of the I-80/I-680/SR 12 Interchange project is replacing the existing single-lane EB SR 12 to EB I-80 connector with a new two-lane connector bridge structure that will be constructed and designed to accommodate future project phases," said Quintana. "The project also is constructing a new slip ramp from EB SR 12 directly to Green Valley Road (GVR) and a new braided off-ramp from EB-I-80 to GVR and southbound I-680. Motorists and the local community wil benefit by improving travel times, reducing cut-through traffic on local streets, and enhanced safety by streamlining connections for motorists transitioning between these three major state routes linking the Bay Area, the Napa Valley, and Sacramento." CEG