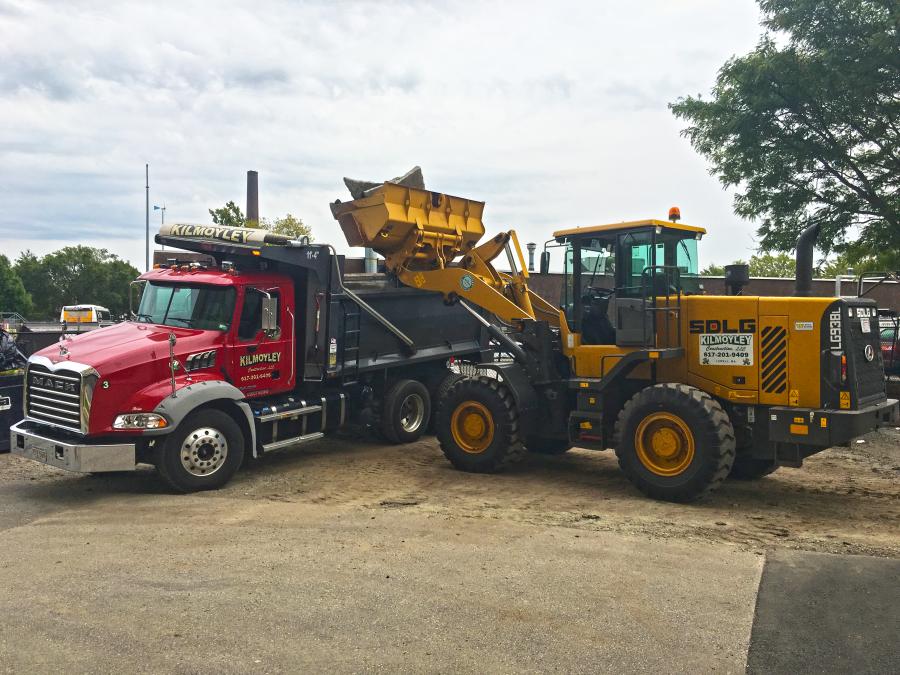 Kilmoyley Construction depends on SDLG wheel loaders to provide a host of crucial services to the city of Lowell, Mass., and its university, UMass Lowell.

Padraig Sheehy came to the United States from Ireland in 1999 with dreams of starting his own business. Having grown up on a dairy farm, he understood the value of a hard work ethic and having the proper tools to do a job. In 2003 he founded Kilmoyley Construction in Lowell, Mass., starting his enterprise with a single backhoe.

Flash-forward to today and Kilmoyley is now a thriving company, providing several key services to the city of Lowell. In 2014 the company won one of its most important contracts yet, a deal to handle snow removal for University of Massachusetts Lowell, a large university in the region. The new contract meant that Sheehy would have to bolster his fleet with wheel loaders. His choice: two SDLG LG938Ls.

“At the time, the SDLGs were pretty new machines in the U.S.,” he said. “I was thinking about buying a used wheel loader, but the SDLGs seemed very well made and they had a really good warranty. Also, you get a lower interest rate when you buy a new machine, so I was very interested. I had been getting equipment from Woodco Machinery for years, so I also trusted that if I had any issues, Woodco would take care of them.”

The move paid off. The size of the 2.5 cu. yd. (1.9 cu m) capacity LG938Ls were a perfect fit for providing snow removal services to the school. Sheehy equipped them with 14-ft. (4.3 m) snow pushers and set to work. The machines could fit well in tight spaces, such as the university's parking lots where lots of cars and students traversed. The operation was efficient, and soon, the city of Lowell took notice.

Following the success of the university contract, the city of Lowell contracted Kilmoyley to provide snow removal services throughout the area. The workload began to expand, too. Kilmoyley started to provide general construction services to Lowell, and began fixing emergency sewer breaks, clearing out job sites, handling materials and more.

“The LG958 is great for loading, dumping and stockpiling snow. The main reason I got the bigger machine was for huge snow dumps, and it turns out, this machine saved me,” Sheehy explained. “In January of 2015, we had what people here called the 'Hundred Year Storm,' and it snowed every day for seven weeks straight. I had all of my SDLG wheel loaders working 24/7 around the university and the city and I never had a problem.”

During the “Hundred Year Storm,” Kilmoyley had the SDLG machines dumping and stockpiling snow at stockpiles that were more than 20 ft tall, most of them on parking lots and soccer fields that weren't in use. They also were feeding 25 dump trucks around the city that were collecting the snow. The job was so relentless, Sheehy rented out his SDLG wheel loaders to other companies when his operators had completed their own shifts.

“The machines do great with snow removal because there aren't many electronics on them, so over time the salt won't cause as much damage,” he said. “Also, they are all registered with the city, so I can drive them on the street from job to job. They have plenty of lights, beacons and flashers, so I can drive them all over.”

Sheehy credits the contracts with UMass and the city of Lowell with helping Kilmoyley change direction — what was once mainly a utility company has now grown into a company with an ever-increasing range of work. He now employs anywhere from seven to 11 employees at one time, and is winning new projects that will continue to expand Kilmoyley's services throughout the region. Sheehy said that should he need more wheel loaders, he would again call on Woodco Machinery and SDLG.

“I'll be keeping these SDLG machines even when the contract is up because I feel very confident in them to handle future jobs. The city is hiring us for more utility work, and I've won some new concrete and masonry jobs, along with sidewalk, drainage, paving, electric and excavation projects,” he said. “These wheel loaders will be great for all of these applications, even if they're just moving materials. If I need more wheel loaders, I'll buy more SDLGs. For the quality and the price, it's a no-brainer.”

Woodco Machinery is based in Woburn, Mass., and is an SDLG distributor for eastern Massachusetts and Rhode Island. In addition to the full SDLG lineup, the company stocks a wide range of construction equipment and has a team of well-trained sales and serviceman to back its products. CEG