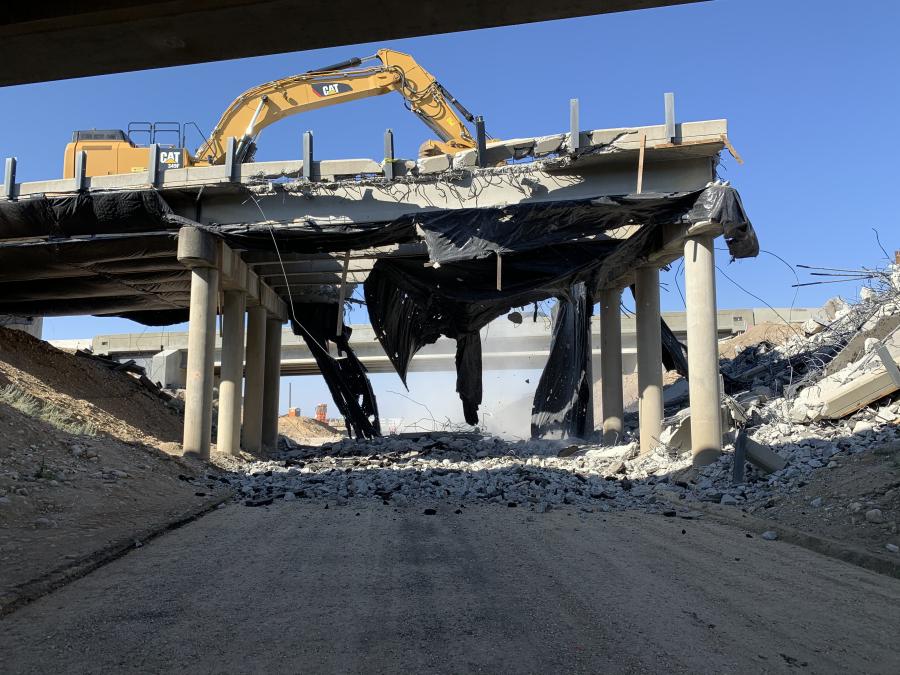 A Cat 349 excavator using a Cat hydraulic shear and breaker was used for the demolition and a hydraulic ramming system was rented from Lifting Gear Hire in Bridgeview, Ill.

The twin east-west bridges – 112 ft. long, two lanes each – at the Blacks Creek Interchange on I-84 in Ada County, Ida. (20 mi. east of Boise and built in 1963) reached the end of their lifespan and have been replaced – hence the Idaho Transportation Department's (ITD) $12.1 million project awarded to Knife River Corporation that had prefabricated two new bridges off-site that were eventually slid into place. 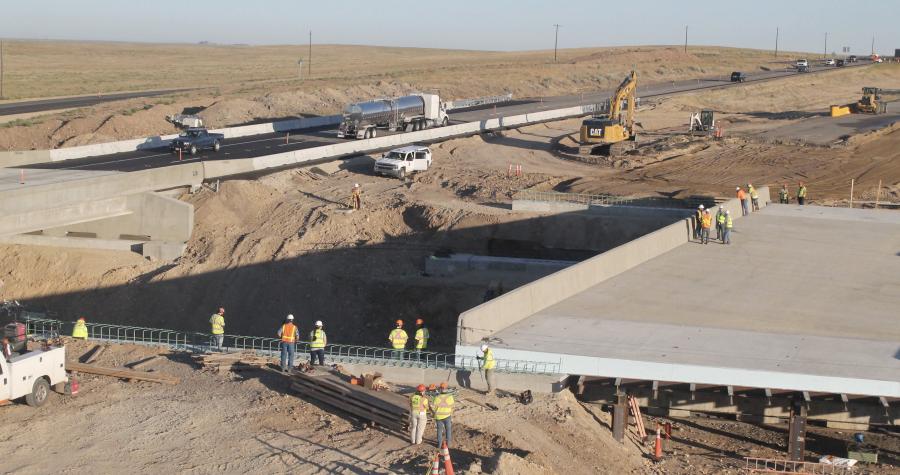 "The existing bridges has been patched to last through construction of the new bridges," said Jake Melder, an ITD public information officer, District 3. "The replacement bridges [were] constructed off of the roadway. Ramps were also upgraded to meet standards for the 80 mph speed limit."

H.W. Lochner Inc. designed the new bridges and road infrastructure, which replicated the previous dimensions of older bridge at 112 ft. long, and will have two lanes each.

"We needed to make sure that the bridge and roadway matched up nicely," said Patrick Kelly, ITD's project manager, who pointed out that the bridges are separated by 40 to 50 ft. to match the grass median of the interstate

This was the first bridge slide operation for Knife River.

"It was probably one of the easiest bridge projects we've had," said Steve Earl, Knife River's bridge project manager. "When a crew completed one task on a bridge they were able to go to the other one and do the exact same task. That was very helpful for the guys and they were able to continually improve their efficiency. It was standard construction for the most part. The only thing that was different was the abutments – they were thicker than normal and had steel shoes on the bottom for the slide, which was done by using a PTFE pad and a hydraulic jacking system that we attached to the abutment.

"We had an anchor on the far side and we pulled the bridge over," he added. "We also had a pile cap driven into and concrete poured with steel anchorages that we attached our thread onto."

The first slide took place between July 13 to 14 and the second from August 5 to 7.

"The actual slides took about four hours each, but the demolition of the existing bridges took about 12 to 14 hours each, and setting our precast slide slabs, which is basically the lower half of the abutment, took another day to install," said Earl. "We were working seven days a week for the slides.

A Cat 349 excavator using a Cat hydraulic shear and breaker was used for the demolition and a hydraulic ramming system was rented from Lifting Gear Hire in Bridgeview, Ill.

The demolition was meticulously planned. 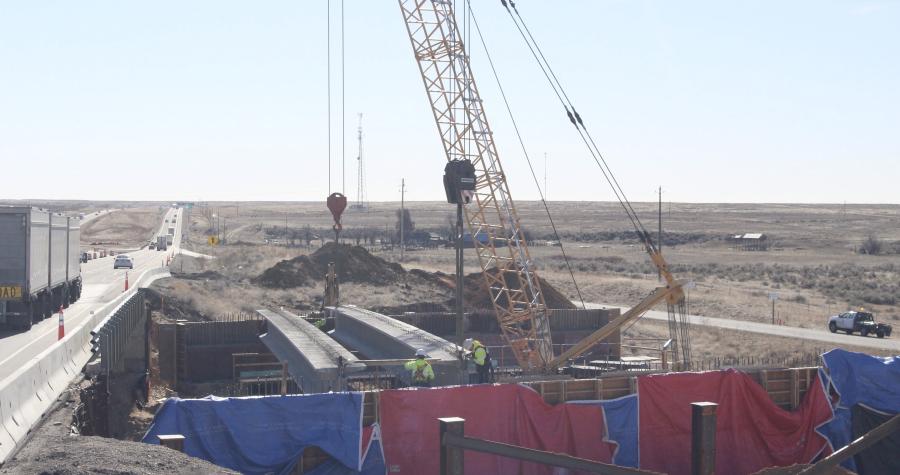 "We went to the record drawings for the original bridges and then assembled a demolition plan, keeping safety in mind," said Earl. "The breaker would open the deck so that the shear could start crushing the girders – they were small enough that our excavators were able to stay on one span and work on the other one, working our way from the center outwards."

Blacks Creek Road was closed for the demolition. The material from the demolition was stockpiled in the staging yard. Shears were used to cut up material and a Cat 330 with a bucket and thumb was employed to salvage the reinforcement material. The concrete was taken to a waste site and the steel was recycled.

"While the traffic was in crossover configuration for the bridge demo and slide operation, acceleration/deceleration and on/off ramps were reconstructed," said Earl. "At one point during the shut-down KRC had three dirt crews, four concrete crews, a paving crew, 15 plus side/belly dumps and a handful of subcontractors onsite in a given day. The earthwork and paving portion of the project was routine highway/interchange work, but it was chopped up into small sections with limited lane closures, which had large fines associated with extra closures.

"It was like putting a puzzle together while someone timed us," he added. "The earthwork was looked at one way at bid time then evolved during the planning and construction phases. Josh Crimbchin and Mike Hart, the earthwork superintendent and foreman, did a great job of changing the order of operation to capture efficiencies while increasing productions and keeping everyone involved with the project and the traveling public safe."

"During the slide operations it was all hands-on deck," said Earl. "Planning and scheduling went on for months, and before the operation began the management team and crews sat down and came up with a day by day schedule broken down to the hour, for each crew onsite. Each morning we meet for an on-site safety meeting to go over each operation and what the safety hazards workers and inspectors needed to watch out for. It was important because we would have crews and subcontractors come onsite for a few hours to help out, and we needed to ensure everyone understood what was going on around them and what should be expected.

"The management team was on-site every day of the shutdown to ensure each crew had what they needed to get their portion of work done and make small scheduling adjustments daily to stay on track," he added. "It really was a team effort with everyone pitching in to get the work done, in a very small area, in the allotted time. Both slides met the expected schedule before the shutdown minus some additional days for ITD directed changes."

Peak days had 40 to 50 Knife River and subcontractor employees on-site, with the major subcontractors being Inland Crane for crane and lifting service, and Lucid Engineers for hydraulic design and operation hydraulic jacks.

The amounts of materials generated from the demolition of the bridges have not been tabulated.

Inland Crane, the crane subcontractor, used a Liebherr 885 to load and set precast, Link-Belt 218A for pile driving and a Liebherr LTM 1350 to set precast in final position.

"We had some hydraulic fitting issues and a pin break and that was it," said Earl. "We really didn't have any mechanical issues. The job site was close to our shop and we had mechanics on call."

"We do quite a bit of business with both United Rentals and Western States locally," said Earl. "We're a mostly Cat construction company and our equipment manager, Bret Olson, does a great job of maintaining a solid relationship with both companies."

"We turned in our estimate for the project in July 2019 and it required a considerable amount of research finding a specialty engineer to work with us," said Earl. "As part of the transportation department's requirements, we had to assemble a bridge slide plan and our final document came in at about 140 pages. We put in several hundred hours into it and that was the key to our success – it ensured that everyone was fully prepared and understood all the steps involved in the demolition of the existing bridges, moving the new ones into place, and then doing all the tie-in grade and concrete work.

"Relations with the ITD are very good," he added, noting that meetings with the ITD increased in frequency as the dates for the slides approached.

Approximately 27,000 cars and trucks use the bridge daily.

"This stretch of road, with I-84, is a very big freight and commercial route that connects the heartland of America to a lot of important ports on the Pacific coast," said Melder. "There is also a fair amount of commuter traffic coming into the Boise Metro Area from communities such as Mountain Home. The old bridge was structurally safe to drive on, however the deck had deteriorated with potholes that we have been continuously patching up. The surface is pretty rough and did not make for a smooth ride. This is one of the main reasons for the replacement."

The initial scope of the funding for the design and construction was approved in 2015 due to it being a connecting point for I-84. The project is being financed by state funds.

"If the bridges, for whatever reason had been damaged, we would not have been able to put any traffic on them," said Melder. "They were a very important link in the chain of I-84 and connect Blacks Creek Road and Kuna Mora Road, a less travelled road at the southern edge of Boise and the Treasure Valley, but one used a meat processing firm that transports livestock and other items on it.

"The biggest challenge was reducing the impacts of construction as much as possible," said Melder. "We saw the slide-in-place method as being the ideal way of replacing the bridges instead of a more traditional bridge replacement where you replace one lane and then another. Given the speeds and traffic volumes, it was the safest and least impactful way to go about this. Structurally we anticipate the lifespan of the bridges to be between 60 and 75 years. It's feasible for the structures to last even longer."

Idaho's state legislature, for the past few years, has raised the speed limits on interstates outside of urban areas to 80 mph.

"These bridges have a loop ramp on the westbound off-ramp and we're going to be changing the geometry to improve the comfort of driving on them," said Melder. "We extended the westbound and eastbound on-ramps to allow for more distance to get up to the 80 mph speed."

Nearly 30 percent of the traffic on Blacks Creek Road consists of freight, and the bridges are designed to handle the loads they carry.

The construction impacted traffic, and for I-84, two lanes in each direction remained open. In mid-July traffic was crossed over into a two-lane, two-way configuration to accommodate demolition of the old bridge and bridge slide. For Black Creek Road, the road was closed underneath the bridge structures intermittently.

"We had to do some overnight closures, but they have been short and we've seen good compliance for the restrictions," said Melder.

Knife River has completed the slides and is waiting for the overhead signs manufacturer to complete fabrication and  signs to be installed.

"They have the forms in place for the diaphragm – the connector points between the girders – and they'll be re-enforcing the abutments ahead of the demolition of the bridges," said Melder, commenting on earlier phase of construction. "They also have the materials staged and ready to go and have plans to ready to set up the ready mix plant for the concrete bridges."

"This method significantly reduces the amount of time each bridge needs to be closed, which provides greater safety and mobility for motorists, and minimizes the economic impacts," said Melder.

Work on the project will soon resume to complete punch list items, including the installation of permanent signage by one of the subcontractors this winter. CEG