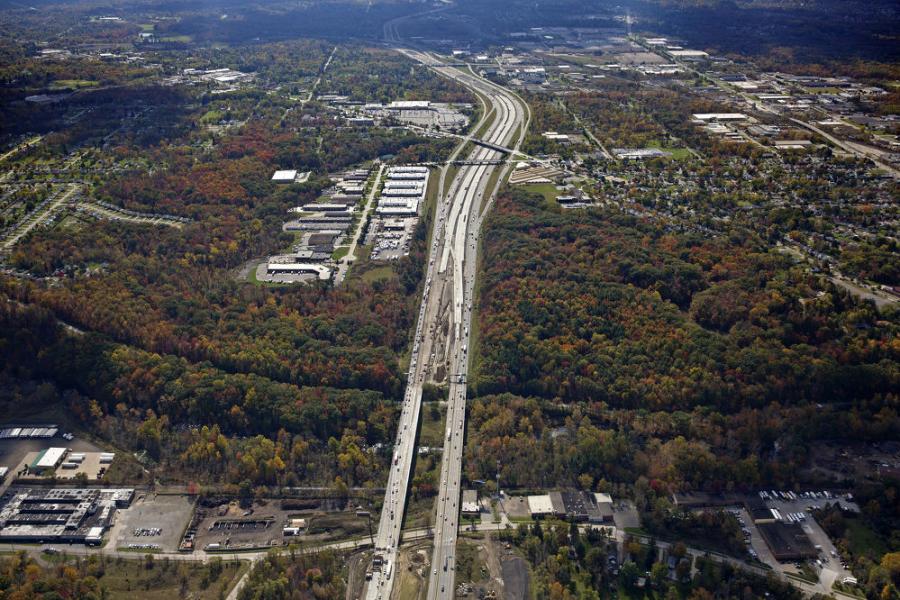 Started on Aug. 1, 2016, the Kokosing Construction Company Inc. is more than half-way through the $119,988,186 Ohio Department of Transportation's (ODOT) I-271 pavement replacement and widening between the Cuyahoga/Summit County line and Miles Road.

The project, federally and state funded, is expected to be completed in June 2020. The work zone covers 6 mi., passing through the cities of Bedford, Bedford Heights, Warrensville Heights, Oakwood Village and Macedonia. 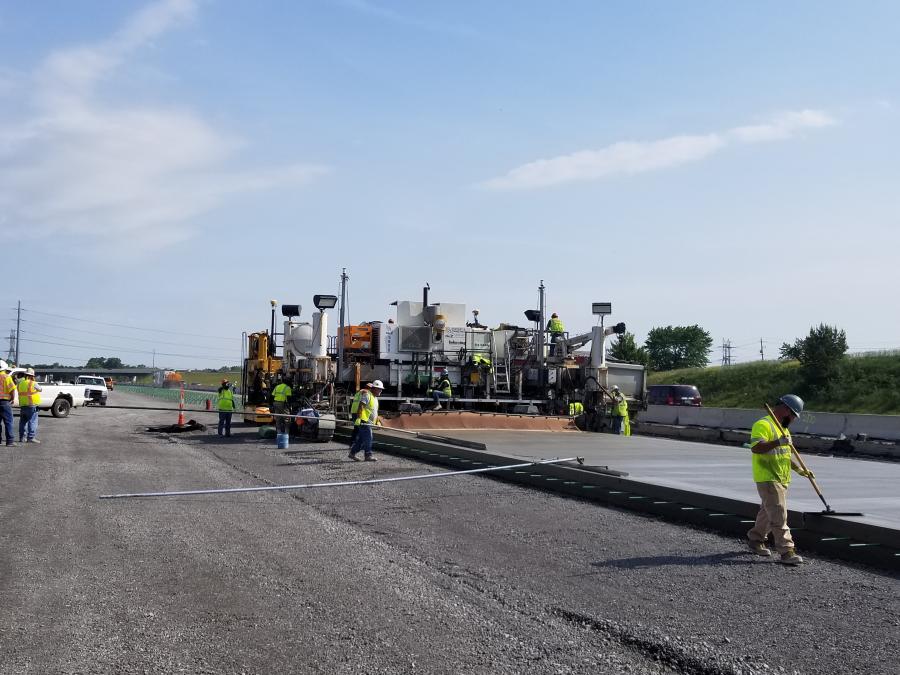 The project also will see the widening of six existing bridges; the construction of two new structures — I-480 westbound over I-271 northbound and I-480 over Bedford/Macedonia Road; and the installation of new lighting, signing, noise walls and concrete barriers.

“The purpose of this project is to improve safety and relieve congestion along this section of I-271,” stated the project press release, “which has been identified on the Statewide Congestion List every year since 2003. The current design of the roadway needs to be improved to handle the current and projected traffic counts in the years to come.”

This section of the interstate was originally built in the early 1960s and traffic volumes have increased to more than 120,000 vehicles per day at Broadway-Forbes Road.

“The project will allow for better traffic flow to accommodate the 120,000 vehicles a day that use this stretch of I-271,” said Amanda McFarland, public information officer of ODOT District 12. “The updates to I-271 also improve the nexus with the Ohio Turnpike. It's hard to decipher who is local and who is just passing through along this corridor on a daily basis, but there are a great deal of businesses along the corridor and it also is a connector to I-90 east of Cleveland.”

The new road infrastructure was designed by DLZ Ohio Inc.

“Tying the Cuyahoga County section into new Summit County section was a challenge because in Cuyahoga County we separated the traffic south of the Tinkers Creek bridges,” said McFarland, “so we had to find a way to bring everyone back together and stay mostly with ROW. The design also had to deal with poor soil conditions and the need to upgrade the drainage.

“The original concrete and composite pavement was in need of replacement,” she added, noting that the new concrete is expected to last approximately 50 years and that the lifespan for the bridge decks is 50 years and 100 years for the structures.

The five-year project is having an impact on traffic, but ODOT has been taking measures to minimize the impact with online construction and traffic updates and by encouraging motorists to sign up to receive project updates.

So far Kokosing has completed: all of the major drainage infrastructure; demolition of three of the six twin bridges; roadway work for the northern 3 mi. section of northbound I-271 earthwork and paving; the I-480 bridges, one that goes over the ramp to Broadway-Forbes and one over Macedonia Road; the earth work for the I-480 realignment (2,500 ft.); 50 percent of the earthwork, paving and median barrier for the southern 3 mi. section of the median; and 50 percent of three structural walls that started earlier this year. 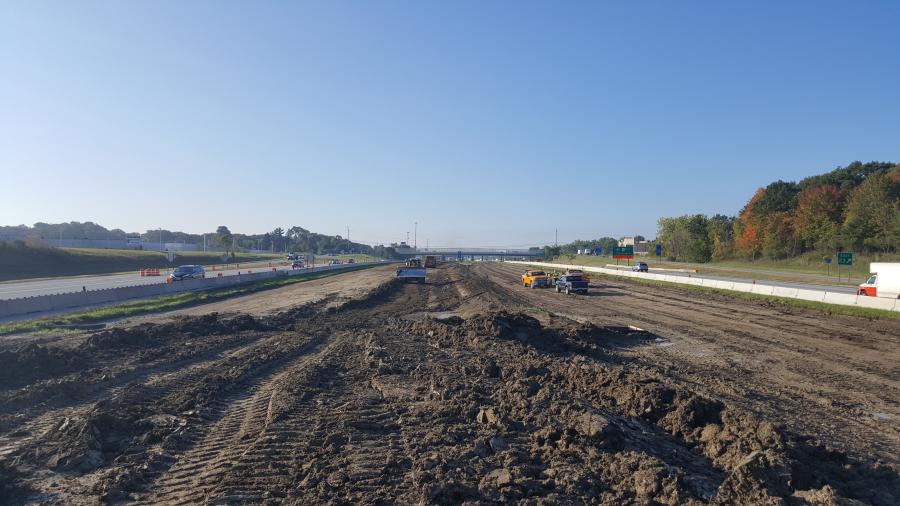 “We also have three more walls that we want to get a start on and get those to about 50 percent completion,” said Mike Lowe, Kokosing's project manager. “Undoubtedly the most challenging aspect is poor soil conditions and the sheer volume of undercuts that we had to do. ODOT identified a certain amount of sulfates and they were unwilling to take a chance on chemical stabilization, so they are undercutting the road, and that quantity is unknown — it just keeps growing and growing and that makes it difficult to plan and schedule your work in an efficient manner. We're working hand-in-hand with ODOT and trying to move as fast as we can.”

There are multiple work sites and multiple crews working on the southern and northern halves of the project.

“The biggest thing is coordination,” said Lowe. “In peak season we can have anywhere from four to five bridge crews, two paving crews, three separate earth work operations, two drainage crews, and crews laying stone. They all have to share people and equipment, and getting people and equipment where they need to go over seven miles is not easy. We have plenty of room on the southern half, and it's fairly easy to do our work.

“The northern half has serious logistical issues as far as getting concrete in and building our haul roads,” he added. “We built haul roads so we can get around and that's our only option. There is absolutely no room to store materials on the northern half. We have a field office about mid-way through the project, and a lay down yard next to it.”

Overall there are no utility issues in terms of relocations, but for the bridge work, serious planning is required to deal with the overhead 138 KV electrical distribution utility lines that cannot be shut down or re-routed during the construction. 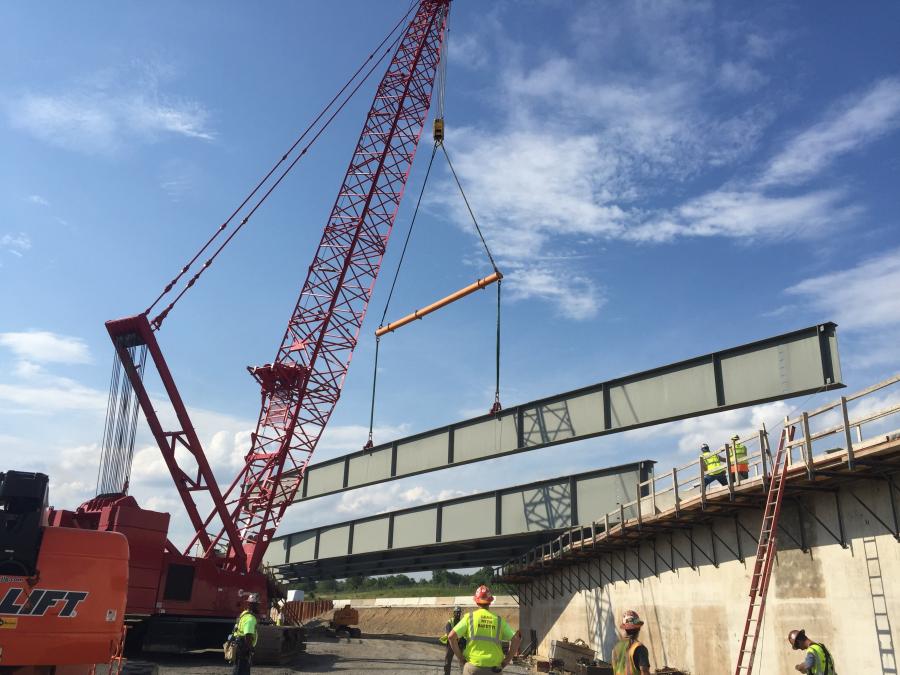 “That has made things difficult for our cranes when we tear down the bridges, do piling and erect the structural steel,” said Lowe. “OSHA has safety rules about how far away a crane can be from live power lines, which makes this a very complicated operation. We've had to re-adjust our plans for different operations to do the work.”

The work season runs from mid to late April to mid-November on a 24/7 basis. Some winter work was done, such as bridge demolition and partial reconstruction.

“We've had a night shift pretty much since the start of construction,” said Lowe. “We have plenty of experience with earth work, so we know how to react to the poor soil conditions. We've offered several options and solutions to ODOT for the quickest and cheapest route to work around the soil issues, which has been a great benefit to them.”

The roadwork for the northern half is phased construction — 3 mi., which has traffic pushed to the outside to build the inside lanes and then switched to build the outside ones. Last year, between May 1 and July 31, Kokosing crews completed the earth work, paving and widening for 3 mi. of the NB lanes.

For the bridge work, which is proceeding on schedule, falsedecking is being used to prevent debris from falling onto the road during demolition and construction operations.

“The demolition work went very well,” said Lowe. “ODOT has also asked us to do some extra work pertaining to the expansion joints and parapet wall reconstruction of the Tinker's Creek bridge, as well as some concrete patching and repairs for several overhead bridge substructures.”

On peak days there are nearly 120 construction workers on site. Some of the major subcontractors are: A&A Safety Inc. for traffic control, Lake Erie Construction for permanent guardrail and signage, Miller Cable Company for electrical and highway lighting, Foundation Steel for rebar and RAR Contracting for trucking and ready mix concrete.

“The subcontractors are here for certain periods of time and we have daily meetings with their foremen,” said Lowe. “We have a very good relationship with ODOT, which is 100-percent required on a job of this magnitude. Myself, Matt Luyster and Kaleb Tobien all work hand-in-hand with ODOT, sometimes on an hourly basis.”

“We're recycling asphalt by milling existing pavements and hauling to Kokosing Materials asphalt plants,” said Lowe, “and some of our broken concrete goes to a recycling center. In addition, most of our structural steel demolition is sent to a scrap yard.” 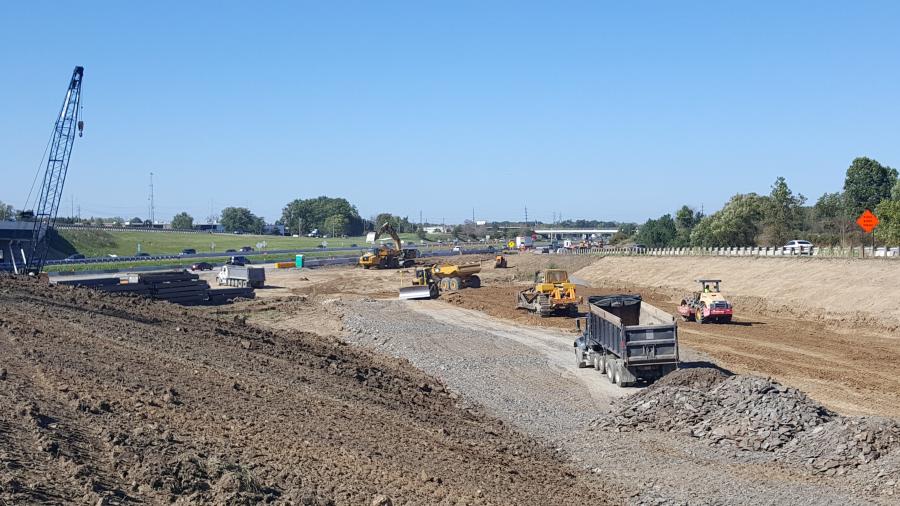 Kokosing is using Manitowoc 180 cranes; excavators ranging in size from Komatsu 228 to 490; Cat dozers with GPS systems — D6Ns, D6Ts and D8s; John Deere 650 dozers; John Deere 624 loaders; and Vermeer 758 and 755 trenchers. An Erie Strayer portable concrete batch plant is producing roadway concrete for the project, which is being assisted by a Cat 980 loader and Gomaco GZ paving equipment.

“We have many smaller repairs such as blown hydraulic lines and flat tires that can be repaired in a matter of a couple hours,” said Todd Durbin, Kokosing's chief master mechanic. “Undercarriage replacements are the biggest repairs. Each machine is tracked by a known number of hours that the undercarriage needs to be replaced. A scheduled routine maintenance is set up for these machines which can be done in a day. We have four onsite mechanics, and nearly all repairs are done in the field. Routine replacements of lubricants and liquids are also scheduled routinely and tracked by the amount of hours the equipment is used.”

Kokosing purchases and rents equipment from dealerships such as Ohio Cat, the Columbus Equipment Company, United Rentals and Sunbelt.

“Dealerships honor warranty repairs and scheduled routine maintenance,” said Durbin. “The key to these relationships is communication and coordination with the projects to do what is required.”

With about two years to go, Lowe is pleased with the progress of his crews.

“Our crews worked extensively and late into 2017 trying to get our goals accomplished,” he said. “Everyone works really well together and it's a huge team effort. Kokosing put the right people out here to make sure that would happen.”