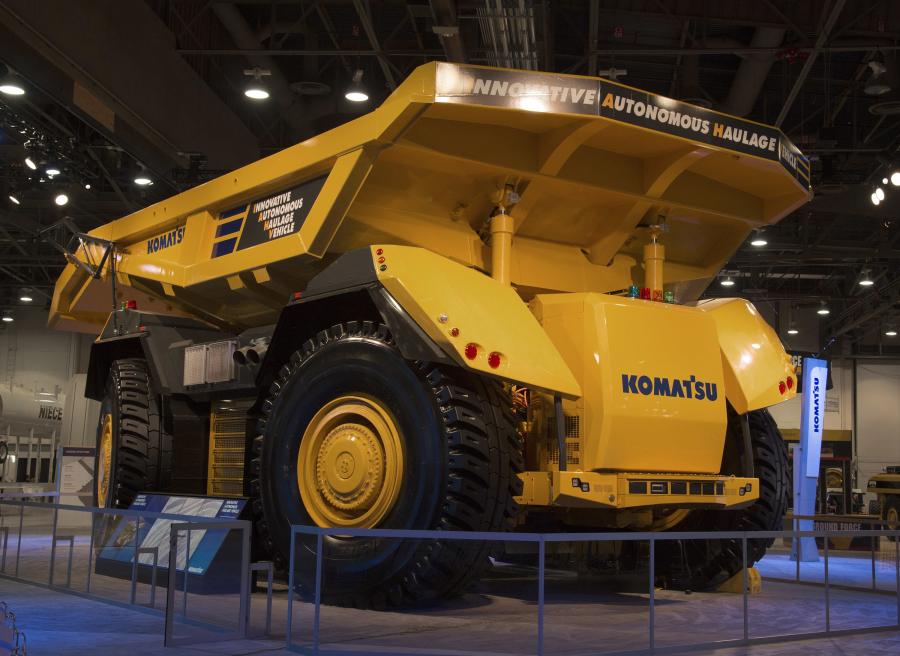 Since 2008, AHS dump trucks have hauled over 1 billion tons (cumulative) of overburden and minerals at large-scale mines mainly in Chile and Australia.

Komatsu has unveiled an "Innovative Autonomous Haulage Vehicle" featuring a cabless structure at MINExpo 2016 in Las Vegas, U.S.A. this year.

Unlike 930E and 830E autonomous models, Komatsu has newly developed this vehicle exclusively as an unmanned vehicle designed to maximize the advantages of unmanned operation. Komatsu plans a market introduction in the near future. By distributing equal load to the four wheels both when the vehicle is loaded and unloaded, and adopting four-wheel drive, retarder and steering, Komatsu is aiming for high-performance shuttling of this vehicle in both forward and reverse travel directions, thereby totally eliminating the need for K-turns at loading and unloading sites. In particular, Komatsu expects that this new vehicle will considerably improve the productivity at mines where existing unmanned haulage vehicles face challenging conditions, such as slippery ground due to frequent rain/snow fall as well as confined spaces for loading.

Komatsu has led the world by commercializing Autonomous Haulage System (AHS) in 2008. Since then AHS dump trucks have hauled over 1 billion tons (cumulative) of overburden and minerals at large-scale mines mainly in Chile and Australia. By continuing its efforts to optimize the performance of mining equipment and aggressively promote remote control and unmanned machine operation, Komatsu will help its mining customers significantly improve their productivity, thereby becoming their indispensable partner.