The ceremony brought out two of the biggest stars in L.A. 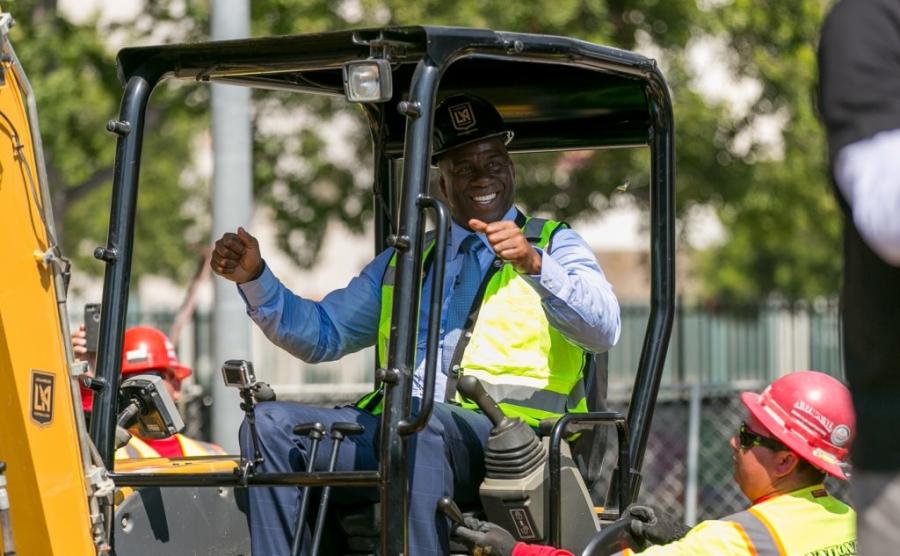 The Club also announced a strategic partnership with Banc of California, highlighting a partnership that shows the community focus of both organizations. The locally based lender is one of the largest and fastest-growing banks in Southern California and does much of its lending to Los Angeles' diverse families, entrepreneurs and business owners.

The new development at the site of the former Los Angeles Sports Arena will bring more than $350 million in private investment to South Los Angeles. This includes a district that will be active on non-game days, 365-days of the year, that will feature a large public plaza, restaurants, retail store and a conference and events center, serving as a sports, entertainment, civic, and cultural landmark for Los Angeles.

Designed by LA-based architectural firm Gensler, the stadium will maximize both fan and player experiences, incorporating elements and best practices from entertainment and sports venues from around the world.

“We start here,” said Larry Berg, LAFC lead managing owner. “After years of planning and hard work we are set to make history here in the heart of the city.

“Banc of California Stadium will allow for greater sports-viewing and live entertainment experiences to take place in Los Angeles than ever before,” he said.

“This world-class stadium will be a state of the art venue featuring 'state of the heart' experiences for players, fans and artists,” said Guber.

Banc of California Stadium is being constructed in a place rich in Los Angeles sports history — on the site of the former Los Angeles Sports Arena and just steps from the Los Angeles Memorial Coliseum.

“Los Angeles is the sports and entertainment capital of the world, and today we open a new chapter in our rich history with the world's most popular game,” said Garcetti. “The construction of this new stadium in Exposition Park will create thousands of good-paying jobs — and when their new home is built, our team will bring soccer fans from everywhere into the heart of our city.”

“It has always been important for me to invest in projects that create and support jobs in communities that are often overlooked, especially here in Los Angeles. The shovels in the ground today mean real dollars are now flowing into this community, benefitting thousands of people,” said “Magic” Johnson. “The new Banc of California Stadium will bring [more than] $350 million in private investments in South Los Angeles. The construction that begins today will lead to the creation of thousands of jobs.”

Banc of California Stadium will host a variety of community and cultural events, but has been designed with the soccer fan in mind. The 22,000-seat facility will offer an intimate game-day experience for fans. The stadium is scheduled to be complete in time for the 2018 MLS season.

“We welcome LAFC and what promises to be a wonderful new stadium here in Exposition Park,” said supervisor Mark Ridley-Thomas. “This exciting venture represents a tremendous investment in South Los Angeles, that will boost our local economy and provide hundreds of good paying jobs to people living right here in this community.”

“This spectacular stadium will provide LAFC and its fans with a world-class home,” said MLS commissioner Don Garber, “and I look forward to the many rivalry matches between LAFC and the L.A. Galaxy that will be played here for years to come.”

“Home of the Olympics, some of L.A.'s most beloved sports teams, and finest football moments of all-time, Expo Park is a place where sports history is made,” said Councilman Curren D. Price Jr. “Today, we begin a new chapter with the LAFC. For my constituents, this rubble we see today is more than a world-class stadium. This is one of the biggest economic development projects South LA has seen in decades. Out of the rubble will rise economic investment unlike any other we have seen in recent years.”

“This day has been a long time coming”, said Congress member Karen Bass (CA-37). “I think it is important to note that without coordination between, federal, state, and local elected officials– coming together and working on behalf of South L.A. to help spark community revitalization — this project would not be possible.”