As the nation’s second largest mixed-use urban development and the biggest building project in Florida’s history, Miami Worldcenter is described as a dynamic urban core of diversity and excitement. 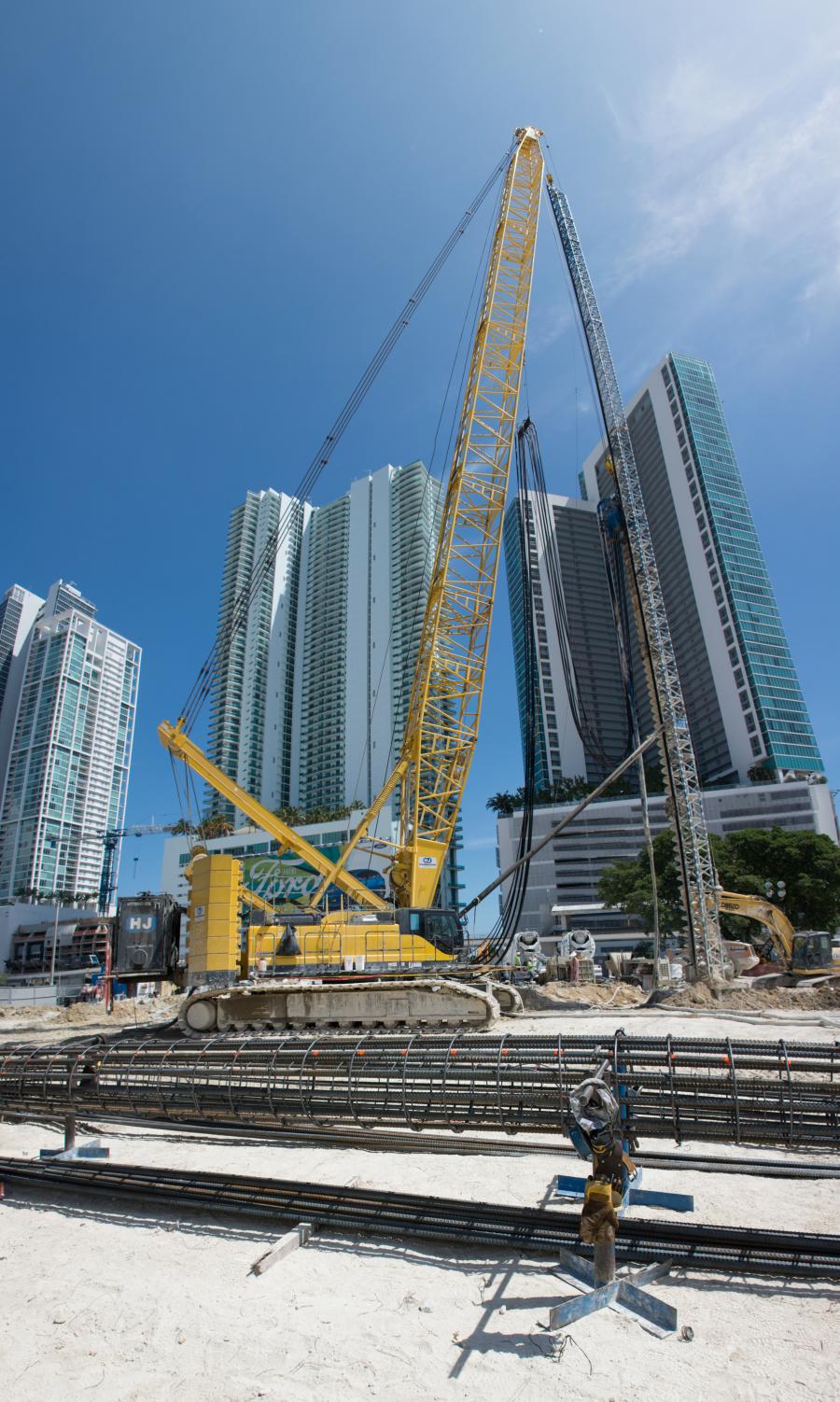 CoastalTishman photo As the nation’s second largest mixed-use urban development and the biggest building project in Florida’s history, Miami Worldcenter is described as a dynamic urban core of diversity and excitement.

As the nation's second largest mixed-use urban development and the biggest building project in Florida's history, Miami Worldcenter is described as a dynamic urban core of diversity and excitement. Being constructed on a 1.1 million sq. ft. (102,000 sq m) terrestrial landscape spread across a half-dozen downtown city blocks, the multi-billion-dollar, mega-retail, residential, entertainment and transportation complex is expected to be completed in 2018.

“Miami Worldcenter is bringing a world-class development in line with Miami's trajectory as a world-class city,” said Nitin Motwani, managing principal, Miami Worldcenter Associates. “This is the game changer that will raise all ships for downtown Miami and the area. We like to think of it as the 'whole of the donut' in the heart of downtown Miami.”

Organizers say Miami Worldcenter will transform some of the most underused streets in downtown Miami, bridging the gap between the central business district and the arts and entertainment district, and between museum park and points west. The project will include retail, hospitality and residential uses.

“Occupying 27 acres in the heart of downtown Miami, Miami Worldcenter is one of the largest private real estate developments underway in the United States,” said Motwani. “Phase One of the ten-block project will include retail, hospitality, residential and commercial uses that will elevate the underserved neighborhood to destination status.

“The hotel and expo center are critical to the overall vision, both in terms of creating a built-in population of visitors and attracting top-tier events and exhibitions — and the dollars they generate — to downtown Miami for the first time in the city's history. All this activity will serve as a catalyst for further economic development and investment in downtown Miami and surrounding areas.”

Motwani said, “Being in Miami, we are prioritizing the outdoors with public spaces and a pedestrian promenade that runs between the bay and the hotel and expo center.”

Located next to Interstates 95 and 395, a number of Metromover stations and the airport through Metrorail and an adjacent high-speed rail terminal, Miami Worldcenter will be accessible through numerous modes of public transportation. Motwani said the economic impact will be significant, as will revitalization and connectivity efforts.

“We're breathing new life into one of the best-located but most-overlooked areas of downtown Miami to the tune of $2 billion in investment. We're improving connectivity between the central business district and the emerging arts district, and making it easier for pedestrians to move between the bay front and neighborhoods to the west, and we're creating thousands of jobs, a high percentage of which will be locally sourced.”

At a major groundbreaking ceremony in early March, Miami-Dade Mayor Carlos Gimenez, developers, architects and commissioners gathered to mark the start of phase one construction of the high-profile project.

Mayor Gimenez said, “We are building a city-within-the-city-of-Miami, which many forecast will be America's city of the future,” adding, “Investors would be wise to get in on the ground floor now.”

Miami Worldcenter will be second in size only to New York's Hudson Yards development at 28-acres. In comparison, Rockefeller Center, built in 1931, is a total of 22 acres.

Hoisting and cranes are critical components to the success, when dealing with projects of this nature, Scarpace said.

“On the Paramount site, we removed some utilities and conducted tree mitigation,” said Scarpace. “There were existing buildings on other parcels of Miami Worldcenter that were demolished.”

Scarpace said the most time-consuming part of the project will involve the building structure and the enclosure.

“This critical work allows the follow-on trades to complete the interior portion of the building. Once enclosure is completed, the interior construction progresses relatively quickly.”

There have not been any notable setbacks so far, and the elements have not posed a threat.

“We allow for normal weather patterns during the planning of a project. Any extraordinary weather, for example, named storms, will be dealt with as encountered.”

“These are challenging components of the project, due to their complexity and locations on the rooftop areas of the podium and garage structures. The total area is approximately 2.6 acres. This work is being performed 90 feet above street level, so lifting all of the materials to this level safely and efficiently is of the utmost importance. Because these are the 'crown' portions of the project elements, they are the last components to be completed prior to opening.”

The usual configuration of elevators is within a common elevator core and lobby. The private elevators will be installed in separate and distinct cores servicing the units. The interior fit-out of the retail and food and beverage spaces will be constructed by the operators of those spaces. CoastalTishman crews will be constructing “base-building”.

The high-profile project is expected to go vertical by summer or early fall of this year. Direct trade employees for construction will be roughly 850 at peak, and does not include management, design and engineering professionals and suppliers staff.

“We are proud and honored to be a part of this transformational project that will have such a positive impact on the Miami area,” Scarpace said.

Stretching 700-ft. (213 m) tall, 60-stories and costing an estimated $500 million, Paramount Miami Worldcenter will feature the world's largest private urban amenities deck. Paramount Miami Worldcenter residents will also have easy access to an expansive restaurant and retail promenade. It will consist of two and three-level stores and restaurants. A public plaza accented by fountains also is included in the plans.

Miami Worldcenter will intertwine several downtown Miami residential and office buildings, an 1,800-room Marriott Marquis and Convention Center and other hotels. It also will serve as the intermodal hub for the downtown MetroMover and Metrorail elevated transit systems.

Adjacent to Miami Worldcenter will be the main terminal of All Aboard Florida, the privately-funded intrastate high-speed railroad. It will connect Miami, Fort Lauderdale, West Palm Beach, The Space Coast and Orlando.

Kodsi explained that many developers were able to acquire land at substantial discounts following the economic downturn, and are able to offer greater value and more competitive pricing to buyers.

Miami Worldcenter will have easy egress and ingress to I-95, helping to avoid traffic congestion.

“The tower features a one-of-a-kind upper deck, which will debut as the largest amenity deck in the U.S., spanning 90 feet above downtown Miami,” said Kodsi. The sprawling amenity deck will be home to a chic resort-style pool complete with floating pods and private bungalows, and a premier sports and entertainment complex featuring an extraordinary array of action-packed amenities that include two tennis courts, a boxing studio and a 'jam' room.”

Another highlight is Paramount Miami Worldcenter's rooftop skydeck and lounge, located at the pinnacle of the tower on the 60th floor.

“The extraordinary skydeck is sculpted in the shape of the stern of a sleek super yacht, with a plunge pool oasis featuring dynamic views of the bay, the city and the ocean beyond.”

Kodsi said the development will also have a significant impact on the local economy.

“Paramount Miami Worldcenter and Miami Worldcenter will create thousands of new construction jobs, generate billions of dollars in taxes and revenues and provide a futuristic infrastructure for generations of Miamians.”

Currently, more than 20 towers are under-construction in downtown Miami, according to the Miami Downtown Development Authority.

Paramount Miami Worldcenter is reportedly attracting buyers from the United States, Canada and more than two dozen other countries, particularly from South America and the emerging wealth classes of China, India, Russia and Turkey.

“These people are wary of the stability of their own country's currencies, which are plunging against the U.S. dollar,” said Kodsi. “They are buying Florida real estate, because it is one of the most-stable investments in the world.”

Of Paramount's 500 residences, 24 will be penthouses. Prices range from $700,000 to $4 million. More than 45 percent of Paramount Miami Worldcenter units have been sold.

According to founding principal Howard Elkus, “The collective vision was to create a dynamic and vibrant civic, residential, hospitality and retail destination for the citizens and visitors of Miami.”

Elkus said the sustainability goal is to achieve a LEED Gold rating, as LEED Silver is the minimum required by zoning. The project will reportedly create one of the largest green roofs in the country, and be fully integrated with public transportation.

While the project may seem overwhelming in size, the creative staff is confident in its abilities.

“We have a top-notch design team, and we are privileged to work for great clients who share our enthusiasm for creating dynamic destinations.”

Elkus said the most time-consuming aspect of the assignment has been the project itself, having been in the works for ten years.

“It has had more than a few different configurations throughout that time. We're very excited to see this come to fruition and provide the citizens and visitors of Miami with what will become the iconic heart of this great city.

“The most rewarding part of the project is the revitalization of a key part of the city that has lain dormant for decades. It's an exceptional privilege to have the premiere design role to create the urban face of Miami, a remarkable global 21st-century city.”

The focal point of Miami Worldcenter will be a pedestrian-oriented 'High Street' retail promenade and plaza featuring shopping, dining and entertainment options. Nearby will be the 7th Street Promenade, a pedestrian-only thoroughfare running from the American Airlines Arena and the waterfront on the east, to the project's exposition center and convention hotel to the west.