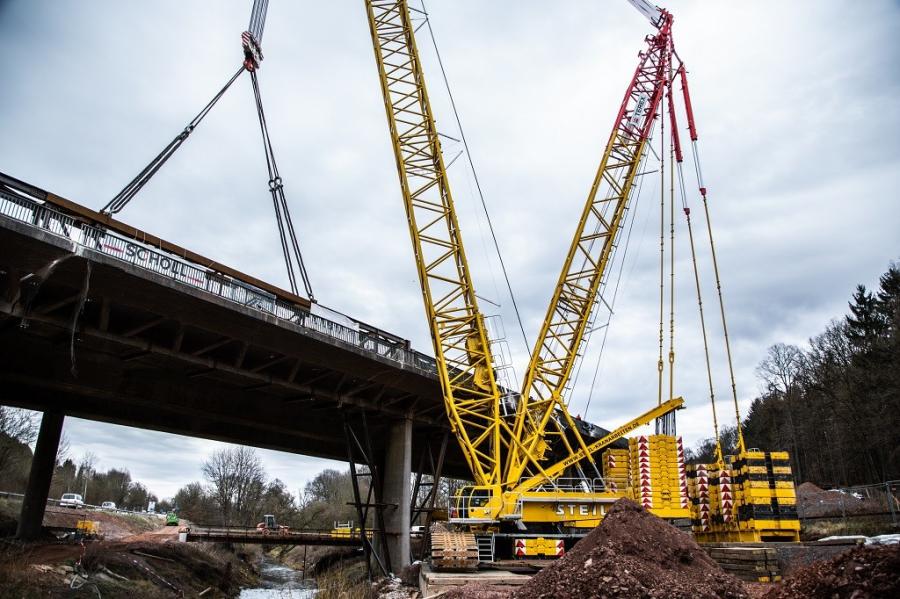 Steil Kranarbeiten, a crane operating company from Trier, considered its CC 3800-1 crawler crane the best choice in the demolition of the old Illtal motorway bridge on the A1 at Eppelborn in Germany.

Heavy loads, large equipment and limited space are usually not a good recipe for lifting operations. This was the situation in the demolition of the old Illtal motorway bridge on the A1 at Eppelborn in Germany, which had to give way to a modern structure. Steil Kranarbeiten, a crane operating company from Trier, considered its Terex CC 3800-1 crawler crane with Split Tray the best possible tool because of the very limited space.

The lack of space on the construction site proved to be a special challenge right from the start.

“The setup of the crane required a sophisticated logistics concept, whereby we delivered the parts just-in-time with 52 transports in order to install them immediately, because there was insufficient storage space for all parts on the construction site which was limited by a stream and a railway line. To make matters worse, rail traffic was maintained during the construction work,” explained René Perlich, head of large cranes at Steil Kranarbeiten, whose team configured the CC 3800-1 for the upcoming lifts with a 256 ft. (72 m) SSL1 boom and 37.7 ft. (11.5 m) Superlift radius as well as 248 tons (225 t) of counterweight on the crane plus 358 tons (325 t) of Superlift counterweight.

Concrete had to be poured in the bank area first in order for the unstable soil around the stream to be able to support the CC 3800-1 safely. Subsequently, bongossi ties also were laid at the work area of the crane for even pressure distribution. This preparation work provided sufficient stability for the crane.

The Steil team had to choose rather unconventional approaches even for the assembly of the Superlift mast and boom out of necessity. The Superlift system structure could not be installed in one piece on the crane as usual, since the required space of 118 ft. (36 m) on the construction site was simply not available.

“We had just about [65 feet] available to us”, said Perlich, whose technicians therefore installed the superlift system “piece by piece.”

The installation of the 236 ft. (72 m) long main boom was another challenge. It had to be set up over the stream due to lack of space.

After the crane was ready for lifting in the intended time frame, the actual work could begin. This proceeded according to the following plan: The bridge was initially divided into 23 to 69 ft. (7 up to 21-m)-long and 39 ft. (12-m)-wide segments, which were to be lifted one after the other by the CC 3800-1 and slewed behind it and lowered down. At the storage area, the bridge parts were later broken down further and transported by truck.

“The heaviest load was superstructure 2, which weighed in at around [380 tons],” said Perlich, who operated the crane himself. “And this lift definitely demonstrated that we were absolutely right in choosing our CC 3800-1. Unlike competing models, we still had a lifting capacity reserve of around 10 percent with this crane.”

Above all, the equipment features of the CC 3800-1 crane with the divisible Split Tray superlift system frame proved to be advantageous in Eppelborn, since the radius of the heavy parts created some challenges due to limited space on the construction site.

“We picked up the heavy loads with extremely wide radii of up to [118 feet] and then placed them behind the crane with a reduced radius of about [46 feet],” said Perlich.

The use of the Split Tray saved a lot of time due to the simple uncoupling of unnecessary counterweight. The assist crane was needed only after completing the lifts for stacking of the counterweights.

Thus the Steil team was able to handle this job quickly and exactly as planned despite the challenging conditions on site.

“Heavy things made light” is the slogan behind Steil Kranarbeiten's comprehensive range of services. The company, which is certified as per DIN EN ISO 9001:2000 and Safety Certificate Contractors (SCC) standards, relies on a highly specialized fleet with modern machines, as well as a highly-qualified team. Its services include not only special-purpose crane, but also recovery and towing services for trucks and buses and industrial and company relocation services. The company is headquartered in Trier, and additional Steil branches are located in Wittlich and Saarwellingen in Germany, as well as in Frisange in Luxembourg.