Danish toymaker LEGO Group said June 15 it will build its first U.S.-based toy manufacturing plant in southeastern Virginia, a project that will carry a price tag of more than $1 billion and result in 1,760 new jobs.

The factory will be the company's seventh global plant and the second in North America. Currently, LEGO building toys sold in the United States come from its facility in Monterrey, Mexico.

The new 1.7-million-sq.-ft. plant will be located on 340 acres at Chesterfield County's Meadowview Technology Park, just off the Meadowville exit of Interstate 295 south of Richmond, the Petersburg Progress-Index newspaper reported.

Construction will start this fall, with a projected completion in 2025, LEGO said in a statement.

Plans also call for a high-bay warehouse for distribution to be built adjacent to the LEGO manufacturing buildings. Prior to that, the popular toymaker said it would set up a temporary packing operation at the site sometime in 2024.

LEGO CEO Niels B. Christiansen called the move "an exciting step" because it gives the toymaker a presence in one of LEGO's largest markets. Although it has its U.S. headquarters in Enfield, Conn., until recently LEGO had no plans for a manufacturing plant in this country, according to the Petersburg news source.

"Our factories are located close to our biggest markets which shortens the distance our products [must] travel," explained LEGO Chief Operations Officer Carsten Rasmussen in the company statement.

"This allows us to rapidly respond to changing consumer demand and helps manage our carbon footprint. Our new factory in the U.S. and expanded capacity at our existing site in Mexico means we will be able to best support long-term growth in the Americas. We are fortunate to find a location where we can begin construction quickly and create temporary capacity in under two years."

According to LEGO, the Virginia factory will be 100 percent reliant on solar energy.

"The LEGO Group's decision to establish its U.S. manufacturing plant in Virginia shines a global spotlight on the advantages that make the Commonwealth the best business location in the nation, and we look forward to a long and successful partnership with this iconic company," Youngkin said.

State House of Delegates member Carrie Coyner, representing Chesterfield County, said in the same statement that she "couldn't think of a better company to join us with its mission focused on the power of play and its commitment to over 1,700 new jobs."

In exchange for building in Virginia, LEGO will be eligible to receive a performance grant of up to $56 million and get as much as $19 million in site development improvements. 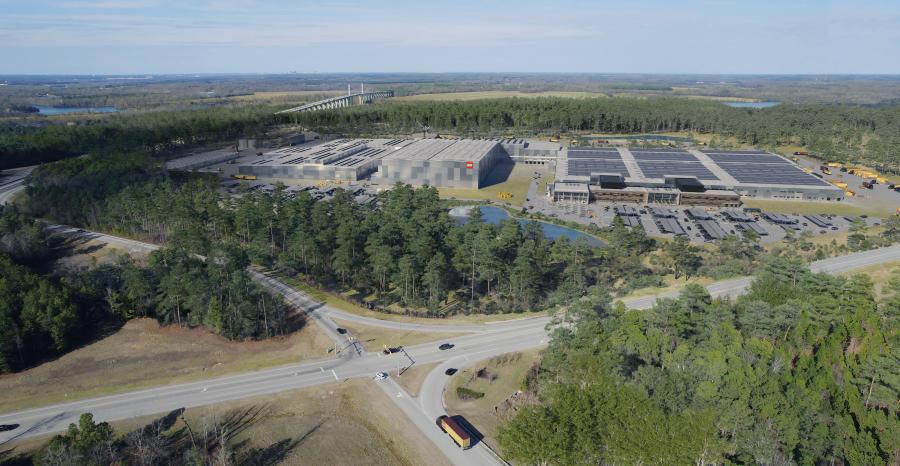 The new 1.7-million-sq.-ft. plant will be located on 340 acres at Chesterfield County's Meadowview Technology Park, just off the Meadowville exit of Interstate 295 south of Richmond, the Petersburg Progress-Index newspaper reported. (LEGO photo)

Like all LEGO facilities, the company noted, operations at the new plant will include applying modern technology to mold, process and pack its products, and ensure they meet the company's rigorous safety and quality requirements.

As an example of LEGO's precision manufacturing, each LEGO brick is molded to the accuracy of a hair's width to ensure the perfect "clutch power" that holds its toy creations together, the toymaker said.

"Our bricks are made to last for generations, so we need skilled employees trained to work with precision molding technology," Rasmussen said. "We look forward to working with the Virginia Talent Accelerator program to help build a great team who are motivated by our mission to inspire and develop the builders of tomorrow."

The Progress-Index noted that LEGO will start taking job applications later this year. Anyone interested in finding out about LEGO employment should visit www.LEGOcareersvirginia.com.

LEGO, which derives its name from the Danish phrase "leg godt" — meaning "play well" — began making its classic plastic building blocks in 1932 and is now the world's largest toymaker.

Starting in the 1990s, it enjoyed a renaissance with additions to its inventory such as Batman and other action heroes from DC Comics. It has opened several "Legoland" theme parks around the world, including three in the United States, and has produced several TV shows and theatrical films involving its characters.