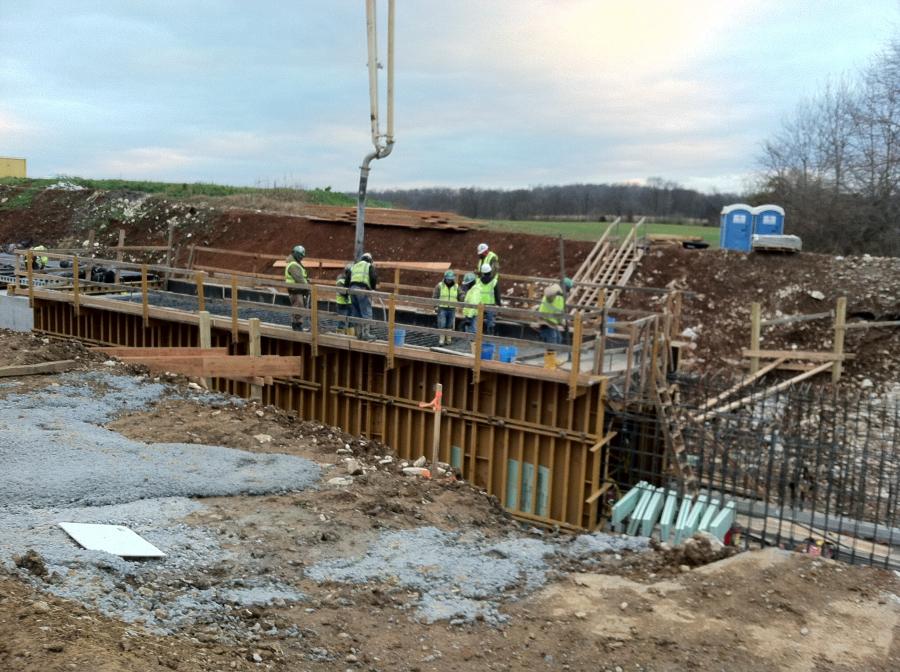 The Joseph B. Fay concrete crew places concrete in a traveling form.

A quarry replacement project in Carroll County, Md., involves the installation of the longest continuous curved conveyor ever to be installed in the state. Large lengths of the conveyor must be below grade due to permit and community restrictions.

The Lehigh Cement Company LLC is currently replacing its Union Bridge Quarry with a greenfield quarry expansion in the neighboring town of New Windsor. The project began in May 2015 and is scheduled to be complete and commissioned by Nov. 2017.

The contract, which is for an undisclosed amount, was awarded to Joseph B. Fay Company, an i+iconUSA Company, with Scott Wilson as project manager. Fay recently received a separate contract for opening a portion of the new quarry across the street.

The quarry is a greenfield site requiring development to begin mining and processing operations including office and maintenance facilities. Work includes excavation, installation of box culverts, and several foundations for the ultimate installation of a 4.7-mi. (7.56 km) conveyor system to enable the client to transport crushed limestone from the quarry to its existing Union Bridge cement plant.

The project covers 5 mi. (8 km), with work being simultaneously performed at multiple locations. This requires extensive planning and coordination of equipment and personnel, and Fay is using BlueBeam Review and ipads to have the most recent drawings and documentation available at all locations.

The conveyor which is being installed is made in China for a German company. This required inspection in China before shipping to the United States and then eventually to the location. This will be done in 40-ft. (12.2 m) sea containers which then will be trucked to the site.

“Throughout the length of this conveyor system, there are seven road crossings, six of which require tunnels to be built under the roadways, which ultimately require road closings to complete the work,” explained Wilson. “Carroll County wants only one road closing at a time. For each tunnel, the area needs to be open cut, back filled, and then have the roadway restored.”

There is a very narrow right of way on the project. Lehigh owns half of the property on which the conveyor is being built, and the remainder is a dairy farm for which Lehigh has easement. Fay is also required to tunnel through the farmland and restore it to its previous conditions.

“To pass clean across the fields, the water flowing from the fields and ditches is passed through clear water diversion pipes,” said Wilson. “Berms on the high side collect the water and funnel it into a pipe through the job site. It then exits the low side onto the field on the other side. Construction must be contained inside of sediment control using silt fence and berms.”

Tunneling is required under three stream crossings, and Fay came up with an innovative approach to have the steams run into a 36-in. (91 cm) metal culvert in the same geographical location and across the tunnel. The original plan diverted the stream to a new geographical location during construction and then back to the original location once completed. The new innovation saves time and has less impact on the environment.

Much of the terrain of the project has limestone with an irregular rock surface. This can vary up and down by 15 ft. (4.5 m) in a span of 10 ft. (3 m) due to pinnacles of rock making it difficult to dig.