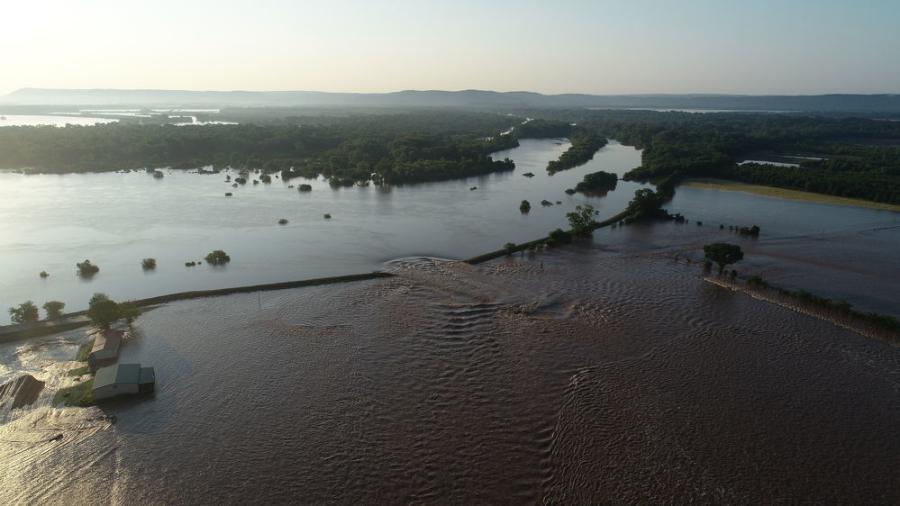 A look from above of the compromised levee, which was originally built by the Army Corps of Engineers in the 1940s and ’50s along the Arkansas River.

Damage from a levee breach in Dardanelle, Ark., is still being addressed several weeks later and a decision is yet to be made on repairs. The city is located about 60 mi. northwest of Little Rock in Yell County.

The breach occurred on May 31, caused by flooding along the Arkansas River upstream in Oklahoma that had been building for days from heavy rainfall. The river started to sharply rise after water was released from a lake near Tulsa by the U.S. Army Corps of Engineers (USACE). 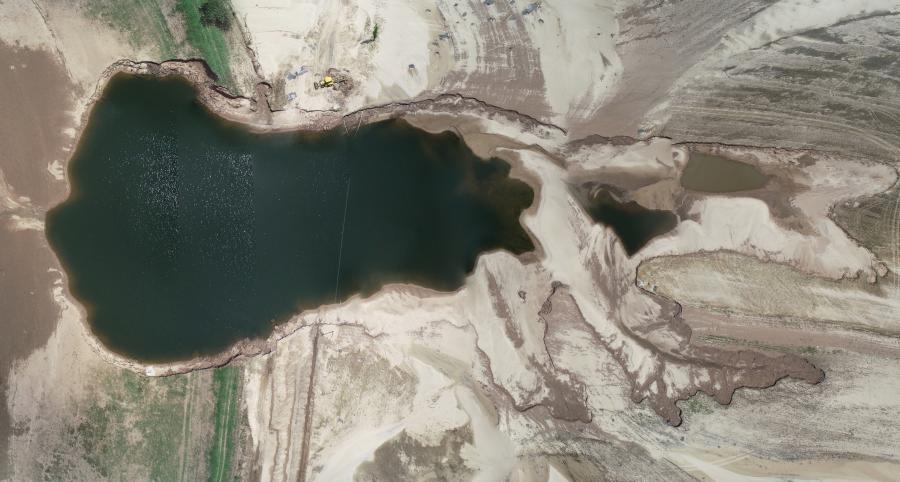 Laurie Driver of the USACE Little Rock District explained that the levee system was originally built by the Corps in the 1940s and '50s along the Arkansas River. However, the law required that the levees be turned over to a local levee district to operate and maintain. If this district was determined inactive, the county judge would be responsible for the levee.

Driver noted that the USACE does inspect the levees regularly and puts the information in the National Levee Database, in addition to providing advice.

"In certain situations, we will provide the expertise because the Levee District may not have it," Driver said. "We help look at hits along the levee system, and when needed we provide various options or possible solutions to help the Levee Board handle emergency situations."

Driver explained that flooding occurred along the Arkansas River in Oklahoma and Kansas. An extreme amount of water was received. The water was held back, but she stated that there comes a point where the integrity of the dam must be kept and a release is required.

"Arkansas knew that a flood was coming," Driver said. "Out ahead of that, we warned property owners in low-lying areas. They needed to make decisions about moving property, animals and equipment. Other than that, the water had to come through." 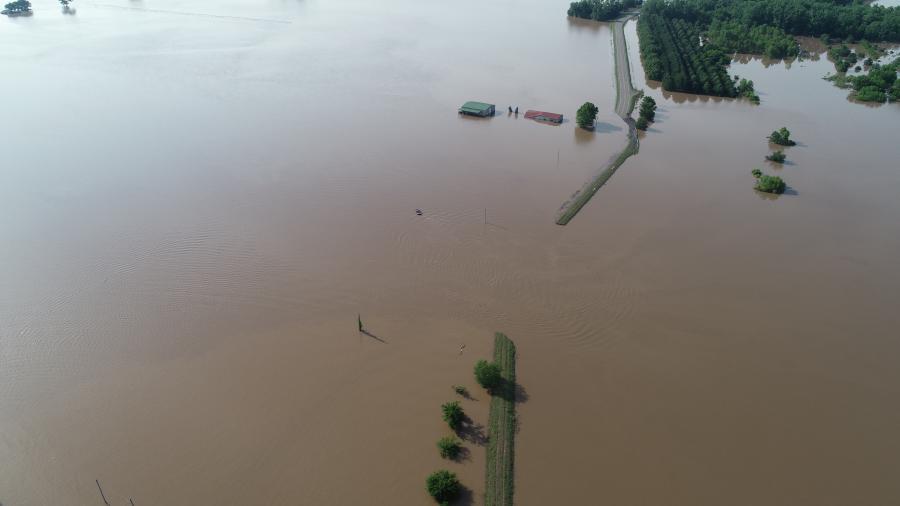 She noted that the USACE has the authority to provide sandbags to state and county local emergency management officers if there is a declaration made by the appropriate government officials.

Witt reported on June 24 that the USACE has since come back to Dardanelle but will not fix the breach, even though the Corps is currently fixing levees in other counties.

"It's going to be a mess and a political battle," Witt said. "This will be judge's decision — he will be one to spend energy and time to get it fixed."

Witt was referring to Mark Thone, the Yell County judge who is in charge of the levee.

"It's up to him to push that battle," Witt said. "It's beyond the city, county and state level. It will have to be fought on a national level."

According to Jeff Gilkey, CEM, CFM, director of emergency management of Yell County, his department foresaw the danger with the water levels coming out of Oklahoma. He noted that 10 to 15 homes were affected, with farms being destroyed and farmland silted in. Witt reported that much of the land is leased to crop farmers.

"We had been notified that the Army Corps of Engineers felt the levee system was in danger of breach throughout the state due to prolonged rains throughout the year that had saturated the system," explained Chief Deputy John Foster of the Yell County Sheriff's Department. "Once we were informed of this, we sent a Code Red Alert, went door to door and left letters in English and Spanish for those who lived near the levee." 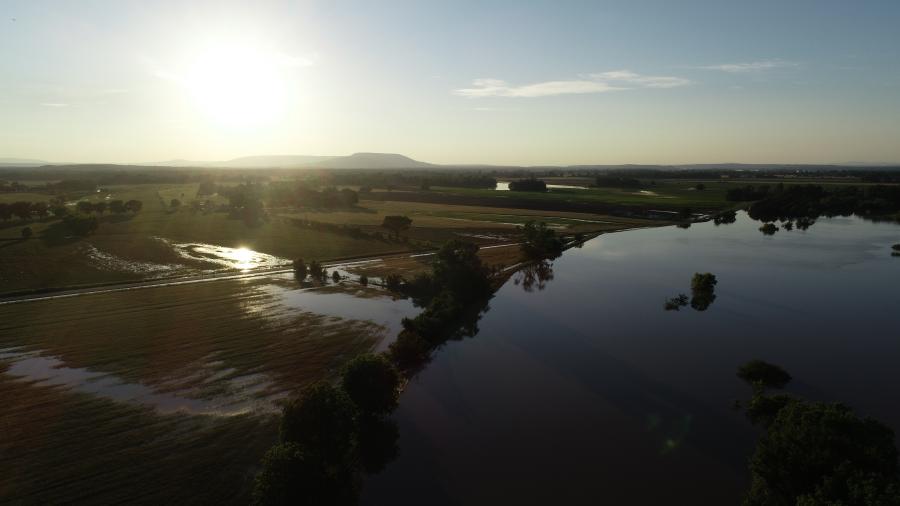 The next step was for the Yell County Road Department to work on low and deteriorated levees to try to limit over-topping. A weak spot was located when the water was at the top of the levee system. An attempt was made to sandbag the spot, but it was soon determined to be too dangerous to place workers in the area.

"This is a rural area and only six people were made to leave," Foster said. "The rest were told it was a volunteer evacuation but highly recommended. Once the levee began to breach no one was in the area and it would take many hours to get to the next area of homes, so we sent a Code Red Alert and went door to door to make notifications of the breach. We had the National Weather Service send out a Flood Warning."

Foster stated that local officials are currently working with FEMA on public assistance. A Declaration of Disaster was issued in cooperation with the state, providing access to equipment not ordinarily available to the city of Dardanelle while allowing local authorities to work on the levees even though they are not publicly owned.

Yell County has a population of 22,500. Industry in the area includes farming, poultry farming and poultry manufacturing. The levee that breached was on State Highway 155 near Holla Bend, which is in a rural area with a few nearby farmhouses. 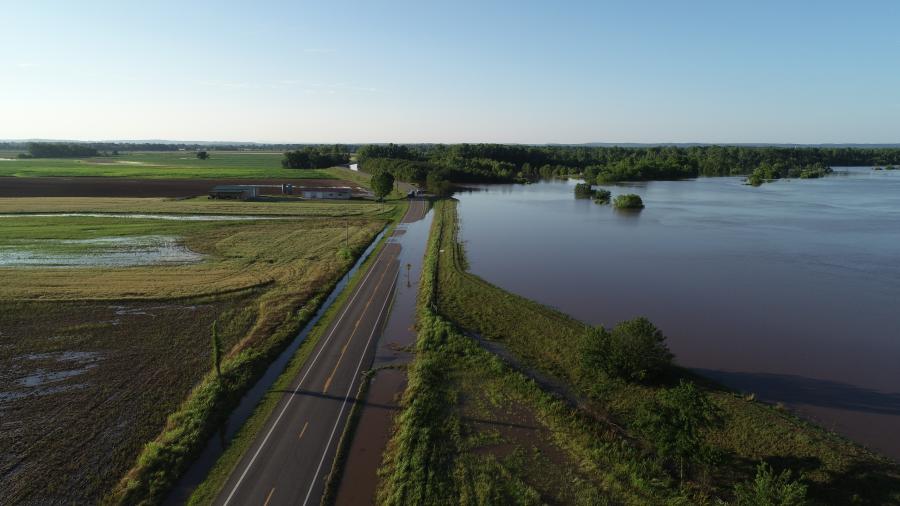 "It destroyed large sections of the highway and damaged several farms and houses," Foster said. "The farmland itself will be heavily impacted because of massive sand deposits from the breach."

"The river runs parallel with us, and the levee breach was between it and the bayou on the south side of town," Witt said. "There's a tributary that feeds water across the fields. It was going at such a rapid pace that [he temporary levee] was my last line of defense. It was a choice between knee deep water or no water in the town."

Foster reported that work in the area so far involves the Arkansas Highway Department working to clear sand and debris from the highway and filling some of the smaller washed out sections.

"The main section will be very difficult because of the scale," Foster said. "The hole from the breach was over 350 ft. wide and was even longer than that, and in places can be up to 40 ft. deep. The water level was at a record high. It was actually going over the top in several spots at the same location before it finally breached where it did."

Previous high levels in the area occurred before the levee system was in place and before the lock and dam system were built. 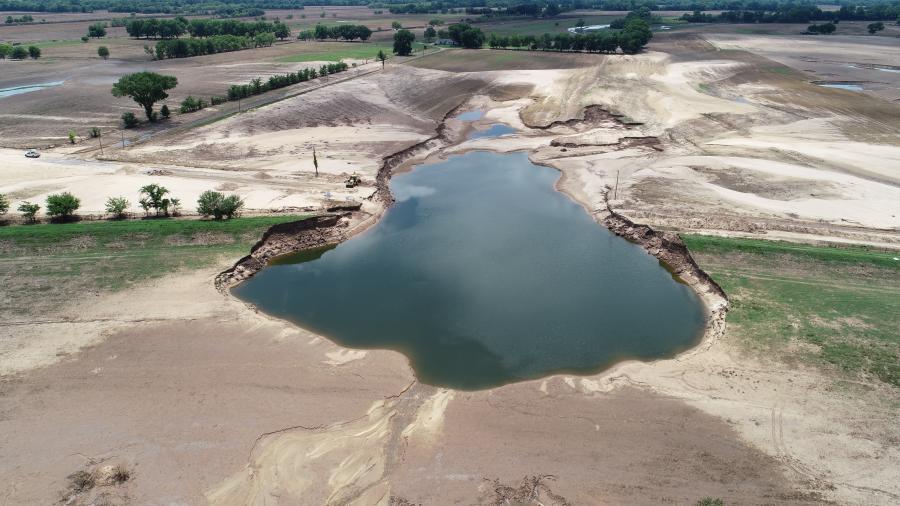 "Minor flooding is not uncommon in low areas of the county," Foster stated. "Nothing like this had ever happened. There were serious near breaches downstream at Atkins and near Conway and there may have been others. We didn't have hardly any rain locally. This was water coming down the Arkansas River from Oklahoma. The levels have dropped to more normal levels now."

According to Witt, the State of Emergency will remain in place until movement is made toward repairs.

"This weekend, damage was still occurring," Witt said on the morning of June 24. "Water is running backward up the storm drains creating cavities that we can't see. On Sunday, another road disappeared into a 17-foot hole. There are giant sinkholes that we can't see, but we can't start major repairs yet. On my end, it's very frustrating. Water was back in the city park again today. It's a lot of repetition work."

There is no end in sight to the water, either. Another 5-1/2 inches of rain was received over the weekend of June 22 and 23.

"The forecast here is for rain all week," Witt said.