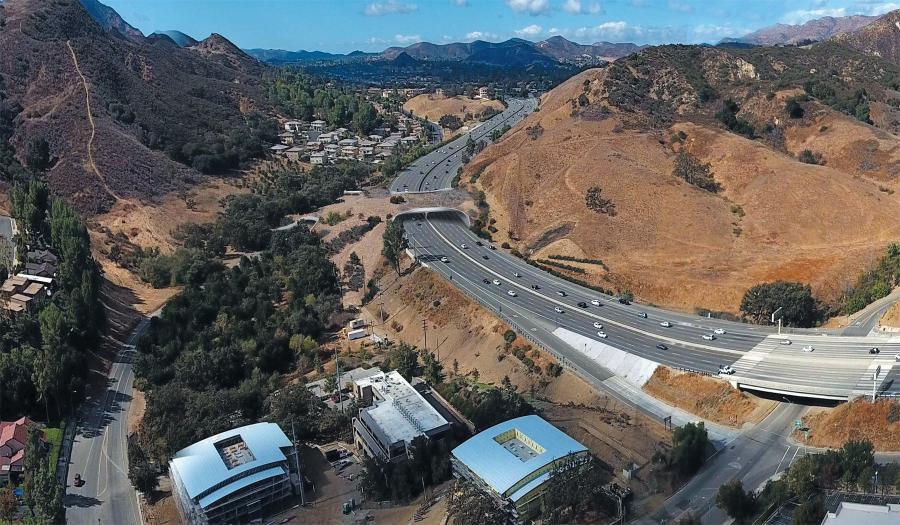 Currently in planning stages, the $88-million land bridge will consist of a 200-ft. long overpass across the 101 Freeway at Liberty Canyon.

A California agency that funds wildlife conservation initiatives across the state announced it will give $5 million toward construction of the Liberty Canyon wildlife bridge in Agoura Hills, according to a report.

Currently in planning stages, the $88-million land bridge will consist of a 200-ft. long overpass across the 101 Freeway at Liberty Canyon.

Workers hope to break ground on the construction next year, the report said.

At its quarterly meeting, the Wildlife Conservation Board (WCB), an independent state agency that funds environmental initiatives, approved more than $25 million in grants to help restore and protect fish and wildlife habitat throughout California. The monies include a $5-million gift to the National Wildlife Federation for the Liberty Canyon Wildlife Overpass Crossing.

The wildlife federation is working with the California Department of Fish and Wildlife, the California State Coastal Conservancy, Caltrans, the city of Agoura Hills and the Santa Monica Mountains Conservancy to build the bridge for animal migration.

Hemmed in by Southern California's freeways and urban development, big predators like mountain lions face a possibility of extinction within 50 years, biologists say. The wildlife crossing will be a major tool in helping both large and small animals travel safely across the local freeway.

According to meeting minutes, the board recently said, "The Liberty Canyon area . . . has been identified as the ideal location for a wildlife crossing over U.S. 101. Prime habitat, contiguous with large swaths of protected habitat north and south of this connection, has already been protected on both sides of the freeway.

"Connecting these areas would give mountain lions and numerous other species living in these highly fragmented habitats the room they need to roam, mate and thrive."

WCB called Liberty Canyon a "biodiversity hotspot," and said, "This location is the best remaining connection between undeveloped open space in the Santa Monica Mountains to the south and the Simi Hills and Los Padres National Forest to the north."

The WCB funding comes from Proposition 68, the statewide parks and water bond act of 2018.

"The board felt it was a great and long overdue project and was pleased that we could be a partner in the project," Donnelly said.

The National Wildlife Federation is leading the wildlilfe crossing fundraiser with its #SaveLA Cougars campaign, and to date $15.4 million has been donated, said Beth Pratt, the wildlife federation's California regional director.

"With the money raised to date, we have secured enough to keep Caltrans funded through next spring, so there are no delays in the project at this time and, indeed, the team is making great progress on final design and engineering," Pratt said.

"We understand these are challenging times, and human health and safety must be a priority. Yet the extinction timeline for mountain lions is not on pause, and we must build this crossing on time or mountain lions may not have a future in the Santa Monica Mountains," she said.