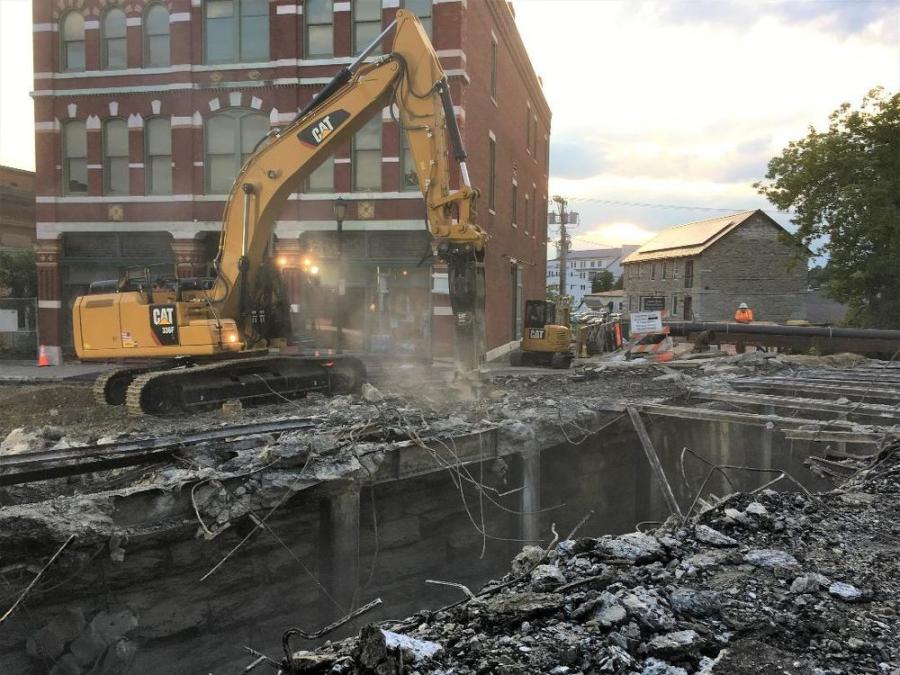 The 10-week construction schedule that began July 13 and will conclude in late September will erect a 360-ft. rail tunnel in Middlebury, Vt., that will replace two deteriorating bridges and support 3,550 linear ft. of rail track.

The 10-week construction schedule that began July 13 and will conclude in late September will erect a 360-ft. rail tunnel in Middlebury, Vt., that will replace two deteriorating bridges and support 3,550 linear ft. of rail track.

Kubricky Construction Corp. of Wilton, N.Y., is the lead contractor on the $70 million job that is being financed almost exclusively by the federal government with two percent by the state of Vermont. 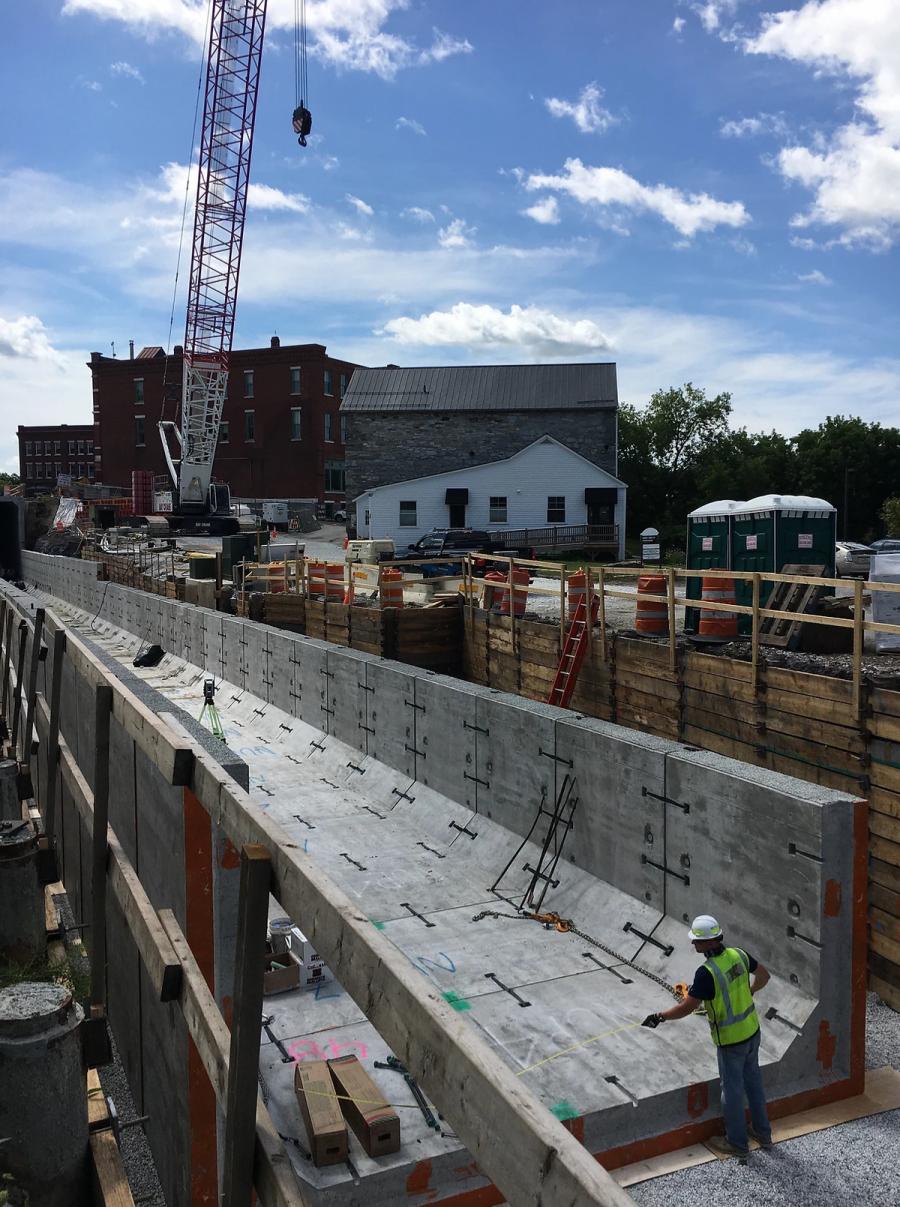 The tunnel is being constructed with 422 precast concrete U-Walls that are positioned in bottom and top sections. The pieces are joined by 20 bolt connections that are sealed with grout, butyl rubber and elastomeric bearing pads, which are designed to keep water out of the tunnel.

The U-Walls from the Fort Miller Co. of Schuylerville, N.Y., were delivered to Middlebury by cranes from Bay Crane of Smithfield, R.I., including Liebherr LR1300 and LR1200 cranes that weigh 330 and 275 tons. The heaviest U-Wall piece weighs approximately 80,000 lbs. and the average weight is 65,000 to 70,000 lbs., according to Joshua French, Fort Miller's vice president of sales and marketing. The completed four-sided tunnel section will be 17 ft., 9 in. wide and 24 ft., 4 in. high, he said.

Prior to tunnel construction, 12 ft. of soil from the rail corridor was excavated between the Seymour Street fire station and the Elm Street overpass. Nearly 20,000 cu. yds. of soil were removed by 15 dump trucks that hauled the soil to various locations.

In between excavation on the north and south ends of the project, Maine Drilling & Blasting of Gardiner, Maine, completed 10 blasts to remove ledge on both sides of the Main Street Bridge.

Before installing the tunnel U-Walls, Kubricky began laying down geotextile fabric and crushed stone that will form the sub-base on which the precast concrete tunnel pieces and retaining walls will rest.

With the rail corridor excavated and blasting completed, the construction of the 360-ft.-long tunnel that will replace the Main Street and Merchants Row bridges began. 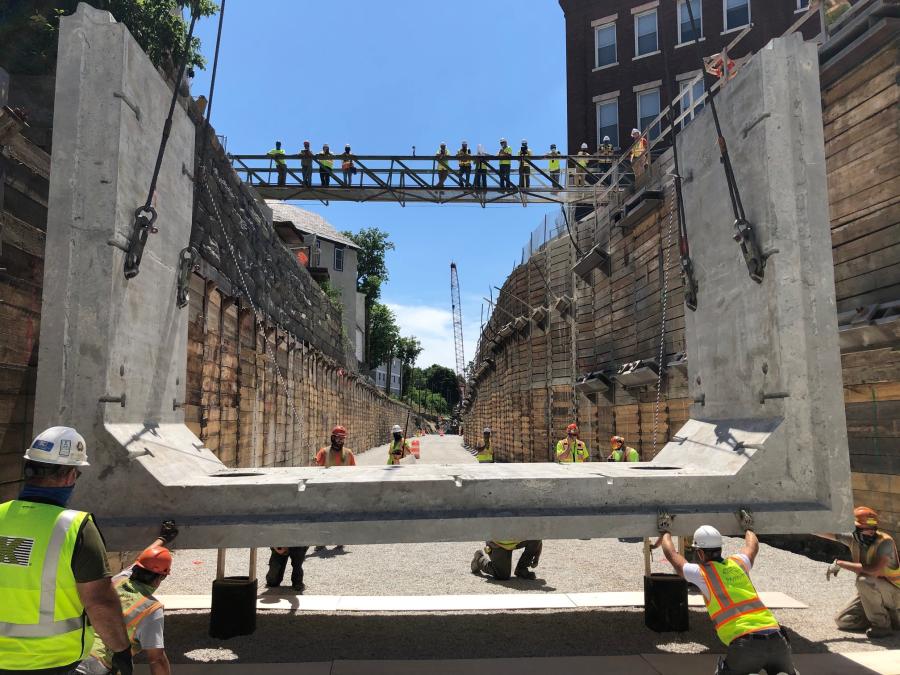 Kubricky extended the bottom U-Wall sections up to the north end of the tunnel underneath Main Street first and then set up 94 precast tunnel pieces.

After the tunnel pieces are set, Kubricky will lay a ballast mat to protect the precast from the stone ballast that provides a bed for the rail track and a dump truck will pump a flowable fill cement mix into some areas while Kubricky brings back excavated soil from Fifield Farm.

Kubricky's next step will be to set nearly 150 bottom U-Walls on the north end of the project, from Main Street at the end of the rail tunnel to crossing near Fire & Ice.

Next, Kubricky will begin backfilling areas around the tunnel. A concrete pump truck will pump a flowable cement mix fill into some areas and Kubricki will bring back excavated soil form Fifield Farm.

The final pieces will be set in place from Seymour Street and Kubricky will complete the job by removing soil from the rail corridor and installing concrete retaining walls that extend the precast on the south end to the trestle bridge over Otter Creek. Then Kubricky will form the concrete bridge deck that will sit on top of the tunnel. 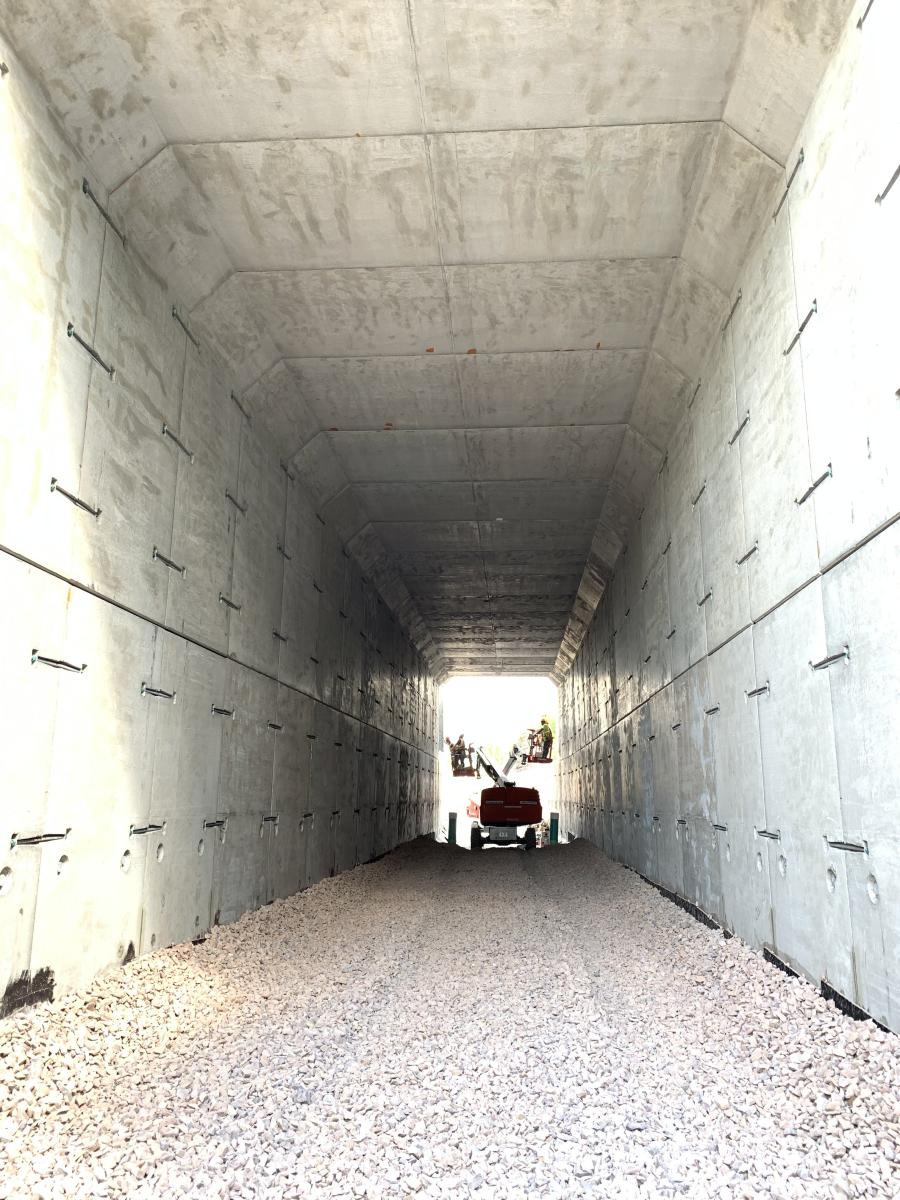 The 360-ft. long tunnel will not only replace the deteriorating bridge, but also upgrade the railroad. According to a VTrans report, the bridges did not have enough vertical clearance for double-stack rail cars. The tunnel will lower the vertical rail bed for more than 3,000 linear ft. that will allow vertical clearance to be extended from less than 18 ft. to 21 ft. that allows the passage of double-stack freight trains without impacting the grade of the streets and sidewalks above. The tunnel will change the rail alignment that reduces the sharp curve and provides better horizontal clearance for trains.

Transportation officials note that moving freight on Vermont's western rail corridor lowers truck traffic on state highway routes, including Routes 7 and 22A and reduces wear and tear on the roads. One double-stack rail car can carry the load of eight trucks.

The completed project will free 9,000 sq. ft. of landscaped area covering the tunnel, which will reunite the town's Triangle Park with its Village Green, after a 170-year hiatus. Triangle Park had been part of the Green from the 1790s until 1949 when the Rutland Railroad divided the two by building a depressed rail line right through downtown. Triangle Park will become a mix of hardscape and green space to accommodate public events and casual relaxation and the newly named Lazarus Park will feature a pathway to Riverfront Park and Marble Works business district. In both parks, granite blocks from the rail corridor will provide seating.

Jim Gish, the community liaison to the construction project said at more than $70 million it is the largest in state history. Gish has followed the project closely and prepared a blog that offers weekly updates that can be found at www.middleburybridges.org/project-blog. CEG