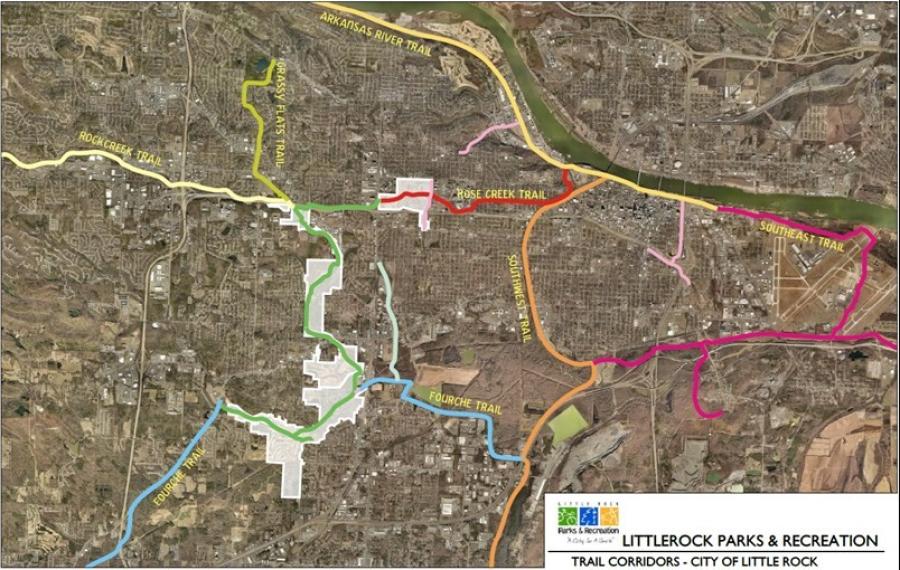 Overview of planned shared-use path corridors within the city of Little Rock. The Tri-Creek Greenway is the green trail.

The Central Arkansas transportation planning agency Metroplan has awarded Little Rock $3 million to build a large section of the 6-mi. Tri-Creek Greenway, a 12-ft.-wide off-street bicycle and pedestrian route that will connect city parks in the southwestern part of the city.

Parks and Recreation Department representatives met with the Arkansas Department of Transportation (ARDOT) to begin planning efforts for the trail section.

Construction should begin in fall of 2020.

Metroplan's funding will build Phase 3 of the Tri-Creek (Brodie, Rock and Fourche) Greenway, which stretches from Western Hills in the south to the intersection of Mississippi Street and South Rodney Parham Road in the north. It also will make use of an existing trail in Boyle Park.

Initial plans call for 3-ft. shoulders so pedestrians and bikers don't clash, while trail bridges will be 14 ft. wide, apart from an existing bridge in Boyle Park. Construction of bridges and underpasses, to create safe passage where none exist now, will require "a lot of engineering," said John Landosky, the city's bicycle and pedestrian coordinator.

"This is an underserved area in Little Rock," added Landosky, who wrote the grant. "The Greenway will be more than a recreational trail; rather it would be a ‘bicycle and pedestrian highway' that will connect separate neighborhoods and offer access to parks for people who don't drive, including older folks and teenagers who would otherwise be staring at a screen."

Phase 1 will build a small portion of the trail in Western Hills and First Tee with a $500,000 Legacy Grant from the National Park Service. Phase 2 will extend the trail from Western Hills through Hindman Park to Brodie Creek Park. The city has applied for a $500,000 Transportation Alternatives Program grant from the ARDOT to build Phase 2.

The city's Parks and Recreation Department has formulated plans to connect downtown Little Rock, midtown, the Southeast Trail from the Clinton Presidential Library to the Terry Lock and Dam, the Southwest Trail (a project of Pulaski, Saline and Garland counties) and trails west, north and south of the Greenway.