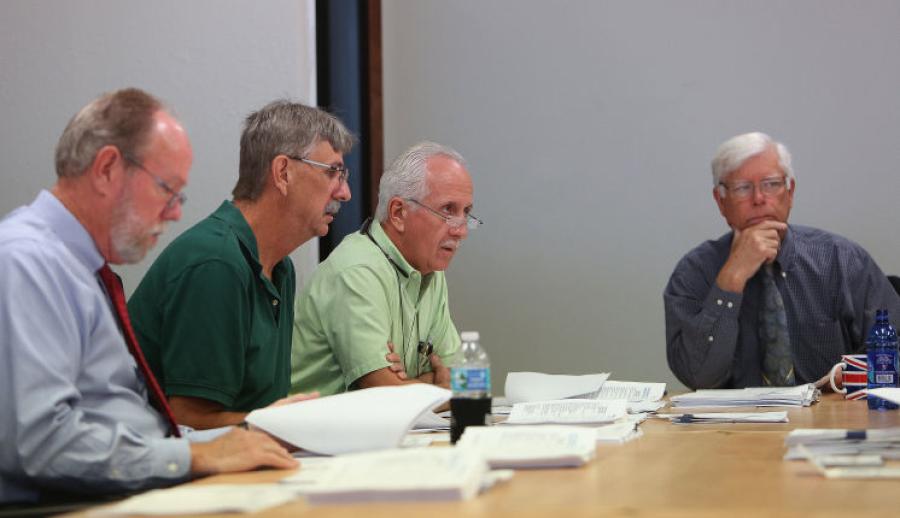 Members of the Pinellas County Construction Licensing Board attend a probable cause meeting to hear evidence against local constructors to see if they violated laws. SCOTT KEELER | Times

For 44 years, the Pinellas County Construction Licensing Board has regulated contractors without any government oversight.

That could end soon.

On Monday, state and local leaders said they want the Florida Legislature to abolish the licensing board and fold the work under county government, like other similar boards in the state.

The calls follow a Tampa Bay Times investigation that detailed the fast and loose approach of how the board handles complaints against contractors. The Times also found that homeowners feel cheated, ignored and even stonewalled. Contractors feel the same way and some believe the board targets anyone who speaks out.

State Sen. Jeff Brandes, R-St. Petersburg, said he and Rep. Larry Ahern, R-Seminole, plan to file legislation that would give control of the licensing board and its work to Pinellas County government.

The licensing board's mission is to protect taxpayers from shoddy contractors.

"Clearly, there's nobody watching the watchmen," Brandes said. "That is the best thing we can do."

Sen. Darryl Rouson, D-St. Petersburg, said that after reading the Times story, he consulted with local leaders and residents about how to reform the licensing board.

"I stand with the homeowners that demand this anachronistic board be abolished," he said. "Its responsibilities should be transferred to the County Commission, so it can be run effectively and be responsive to the citizens it serves. I'm working on legislation today to solve this issue."

Rep. Chris Sprowls, R-Palm Harbor, said he is open to either folding the work into county government or reforming the 1973 legislation to add stricter oversight.

"That board is unaccountable," Sprowls said. "We need to make changes."

The Florida Legislature created the board in 1973, but it does not answer to any government officials.

County commissioners said the lack of government oversight does not serve contractors or Pinellas residents.

Chairwoman Janet Long said she heard frequent complaints Sunday from taxpayers who read the Times' investigation. An agency that regulates thousands of contractors should report to government leaders, not a board of private contractors, she added.

"This is totally outrageous," said Chairwoman Janet Long. "It is not serving the needs of contractors and taxpayers."

Vice chair Ken Welch said the Times' findings echoed complaints the board has heard in recent years. He said he would support folding the licensing board into county government.

"Accountability is missing," he said. "We need to follow what works in other counties. It's time to start looking at that."

Commissioner Pat Gerard said she wants state lawmakers to take the appropriate steps to protect Pinellas residents and contractors to disband the licensing board and allow the county to oversee the work.

"I'm hoping they get rid of it," Gerard said about the 1973 legislation. "It makes more sense."

Commissioner John Morroni, through a spokesman, said he "would fully support" bringing the work of the licensing board under the control of the Board of County Commissioners."

The Florida Legislature established Pinellas' unusual licensing board to create uniformity in the county's construction and fire codes. It has an annual budget of $1.8 million collected from fees and fines, and a paid staff of 10 — an executive director, five office workers and four investigators. Executive director Rodney Fischer, 72, has led the board since 2001. Fischer did not comment for the Times investigation and could not immediately be reached on Monday.

The board of directors consists of 21 men — 14 are private contractors who volunteer. The other seven are building and fire officials across Pinellas County.

The board's lack of accountability came up repeatedly during the 60 interviews conducted for the Times investigation, which also included a review of more than 5,000 pages of public records and 17 hours of the licensing board's audio recordings.

Members of the panel that review complaints against contractors mocked the public, targeted critics, and turned the recorder off when it suited them, the Times found.

Until recently, the board kept no written minutes of the disciplinary hearings, which experts said violates Florida's public records law. The failure leaves consumers and contractors in the dark about how their cases were decided. Board officials also gave conflicting accounts of what public records were available.