Funding for the $80.7 million project was provided by the states Corridors of Commerce program, created in 2013 by the Minnesota Legislature. 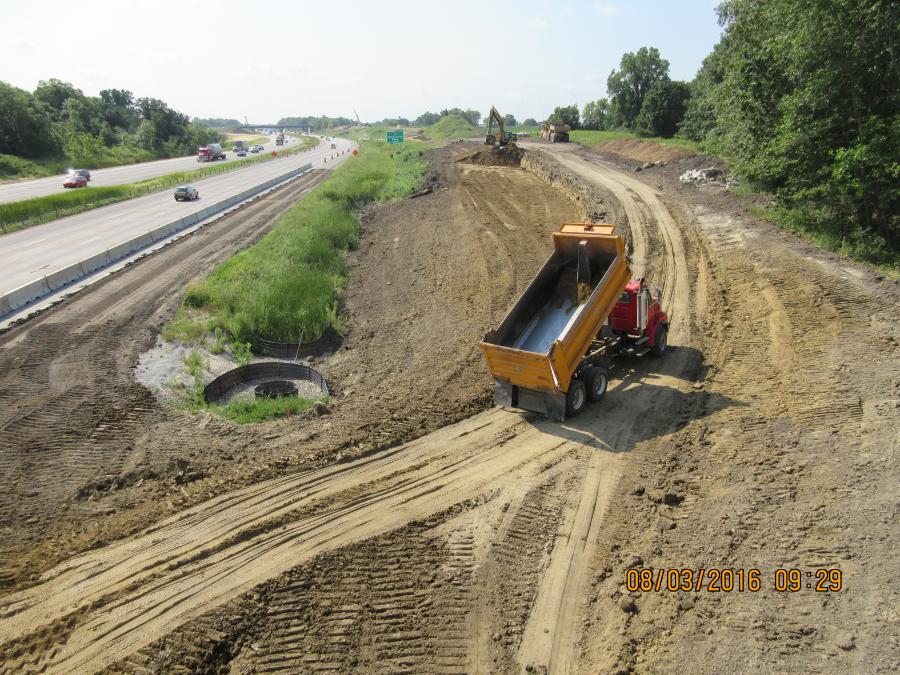 Scheduled to be fully completed in the spring of 2017, crews from Lunda Construction Company are working on the fifth and final section of the Minnesota Department of Transportation’s (MnDOT) Highway 610 design-build project that is extending the well-travelled road t

Scheduled to be fully completed in the spring of 2017, crews from Lunda Construction Company are working on the fifth and final section of the Minnesota Department of Transportation's (MnDOT) Highway 610 design-build project that is extending the well-travelled road to Interstate 94 from the County Road 81 and Elm Creek Boulevard area in Maple Grove.

Funding for the $80.7 million project was provided by the states Corridors of Commerce program, created in 2013 by the Minnesota Legislature. The program authorized the sale of up to $300 million in new bonds for the construction, reconstruction and improvement of trunk highways. The program is funding about 20 highway projects.

“The new two-and-a-half mile roadway will fill in the gap between Elm Creek Boulevard and Interstate 94 in Maple Grove,” said R. Kent Barnard, communications and media specialist/business liaison, MnDOT Metro District communications and engagement, “allowing you to travel through the northern Twin Cities suburbs unimpeded between I-35W in Mounds View and I-94 in Maple Grove. But we will still have some work to complete next spring to clean up and finish some final details.”

The remaining work includes the demolition of the 101st Avenue NE bridge in early 2017, the installation of the transportation management system, the lighting in the County Road 81 tunnels and along the project area, curb and gutter installation, putting in of guardrail, bridge painting and turf reestablishment.

Work began in the fall of 2014 and the goal of the project was to provide a new northern crossing of the Twin Cities Metro area and to relieve some congestion on Interstate 94, a parallel route south of Highway 610. Future projections for the road envision nearly 80,000 vehicles per day by the year 2030. And the new road will support local economic development and improve the movement of freight in the region.

“The expansion of Highway 610 in Maple Grove is one of the Corridors of Commerce initiatives to reduce travel times and improve safety,” said Barnard. “It will also help businesses transport their products more efficiently to meet the needs of the state's growing economy. The new highway corridor will help continue economic growth and create jobs within the northwest Twin Cities suburbs.”

Numerous businesses and residential developments have sprung up along the previously completed sections of the new highway, including relocation of Target Corporations headquarters. Additional businesses have been eyeing the area for new developments once the highway is completed.

Barnard said that there were no major design challenges and that the new roadway will meet demand by motorists for the foreseeable future.

“The highway was built to meet federal design standards and uses materials that stand up to the rigors of weight and the state's harsh climate,” he said, pointing out that Minnesota is host to “one of the world's most preeminent road pavement research facilities — MnROAD. The lifespan of the new road is similar to any new road built in the state. It depends on the volume of traffic and weight of said traffic.”

Crews carried out major construction from 2015 into December, which resulted in the construction of Highway 610 and the adjoining railroad tunnel at the east end along County Road 81 and some work on 101st Avenue.

“As completed,” said Barnard, “the project has realigned and extended Hwy 610 from its current location at Hennepin County Road 81 and Elm Creek Boulevard to join I-94 in Maple Grove. There are connections from westbound Hwy 610 to westbound I-94 and from eastbound I-94 to EB 610. It also led to the construction of a new interchange at Hwy 610 and Maple Grove Parkway; closed and removed a half mile segment of 101st Avenue North between I-94 and Fernbrook Lane; and extended 105th Ave west from Holly Lane across I-94 to a new intersection with 101st Ave.”

The work resulted in local roads being closed to help protect construction workers and ensure that the schedule benchmarks were met. This included the closure of three miles of the Medicine Lake Regional Trail along Fernbrook Lane as well as Fernbrook Lane, Maple Grove Parkway and occasional lane and full closures on Interstate 94 and Hennepin County Road 81. There were no major incidents experienced during the full closures with detours handling the displaced traffic, according to Robert Rabine, MnDOT project supervisor. Most closures along the interstate or on County Road 81 were planned for non-peak times to lessen the impact on travelers. Traffic control during full closures for construction activities such as setting bridge beams were facilitated with the assistance of the Minnesota State Patrol, which stopped traffic.

Lunda has worked on many MnDOT projects, especially major bridges and roads.

“There were no real challenges during the construction as the Design-Build process allowed for flexibility in the field,” said Bob Rabine, MnDOT project manager, “and designers who worked in the office were able to catch any anomalies during plan review.”

Winter did not stop work on the project with construction continuing on bridges and retaining walls and some tunnel work over County Road 81 and the BNSF Railroad. Much of the bridge's substructure such as footings, piers, columns and abutments were poured during the winter as well as the poured panels that make up the tunnel walls .

Lunda Construction and its contractors were able to draw on many years of experience in building roads and bridges.

Utility relocation was coordinated through the contractor. MnDOT and the contractor worked together with the utility companies to coordinate utility moves as needed during the work. Among the utilities that were moved are: CentrePoint Energy, Centrylink, Comcast and Xcel Energy. An Xcel Energy power line located along the new alignment was moved prior to the start of construction so it posed no problem for the project.

“Bridge work proceeded as planned although weather did slightly delay some aspects of the work, said Jeremy Bubb, Lunda's project manager. “By working on the substructures throughout the winter and then building the superstructure [above the piers] in the spring, Lunda was able to keep the work on schedule. Since the bridges were standard design 'cookie cutter' structures, borings to collect geotechnical samples were critical to determine if a spread footing or piling was needed for each of the bridges. And for all intents, the tunnels are similar to giant bridges to carry Highway 610 traffic over the railroad and county road beneath.”

On peak days there were close to 150 workers on site including designers, construction workers, truck drivers, heavy equipment operators, inspectors and administrative staff. The major subcontractors on this project are Shafer Contracting, Premiere Electric, Standard Contracting, Hardrives, Stonebrook and TKDA.

Regular weekly meetings and daily discussions among the project team ensured that problems were resolved rapidly. With most employees co-located in the same building, impromptu meetings were often held to discuss any design or construction issues.

In the design-build mode, the contractor was provided a basic 30 percent design and then was able to suggest design changes to those plans to save money and improve the construction process. The use of a tunnel design to carry traffic up and over a local road and railroad track was one such change. Modifying the bridge alignment allowed for the use of concrete beams rather than steel beams, which saved both time and money. MnDOT was able to take advantage of Lunda Construction's nearly 80 years of experience during the project. The company, founded in 1938 in Black River Falls, Wis., will soon celebrate 80 years in business.

Throughout this project Lunda used equipment manufactured by numerous companies, including Volvo, Terex, Manitowoc, Komatsu, Caterpillar and John Deere. Among the notable equipment were four scrapers, six off-road mining trucks, along with many 100 and 50-ton (90 and 45 t) crawler and mobile cranes, dozers, backhoes, dump trucks and belly dumps.

“Since the project was a standard design, there were no major surprises during the construction,” said Bubb. “And since much of the new highway is built on former farmland, there were few of the challenges that would be experienced when building a roadway through a more densely populated area.”—CEG