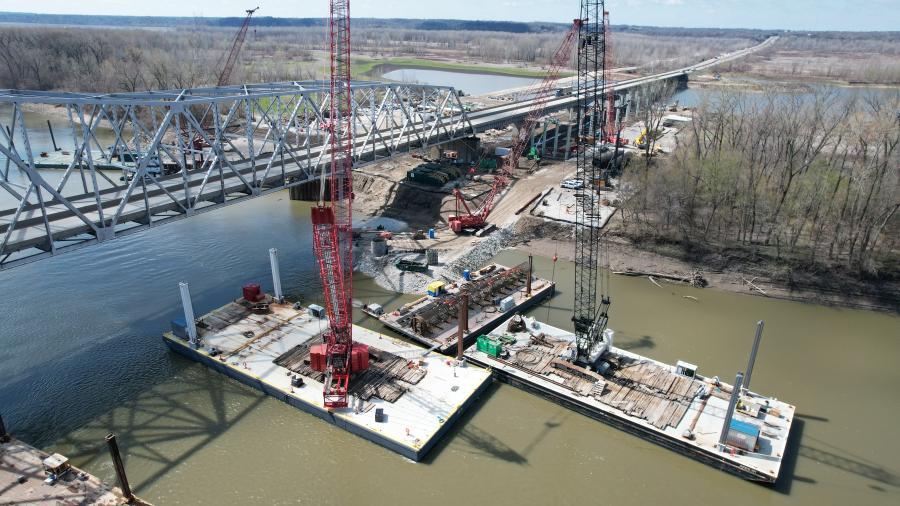 Construction is on schedule, with the westbound bridge expected to be completed in late spring 2023, and the entire project finished by the end of 2024. (Lunda Construction Co. photo)

With a goal of replacing the Interstate 70 Missouri River Bridge near Rocheport, work crews in Jefferson City, Mo., have been blasting and excavating rock to pave the way for actual construction of the new structure. The Missouri Department of Transportation (MoDOT) is overseeing the undertaking, which began in October 2021.

"The existing Rocheport Bridge is at the end of its useful life," said Derek Lepper, MoDOT deputy project director. "The bridge was in need of a major rehabilitation that would have required MoDOT to restrict I-70 traffic to one-lane in each direction for an extended period of time, potentially causing three-to-eight-hour backups. This rehab would have only extended the useful life of the bridge by about 10 years." 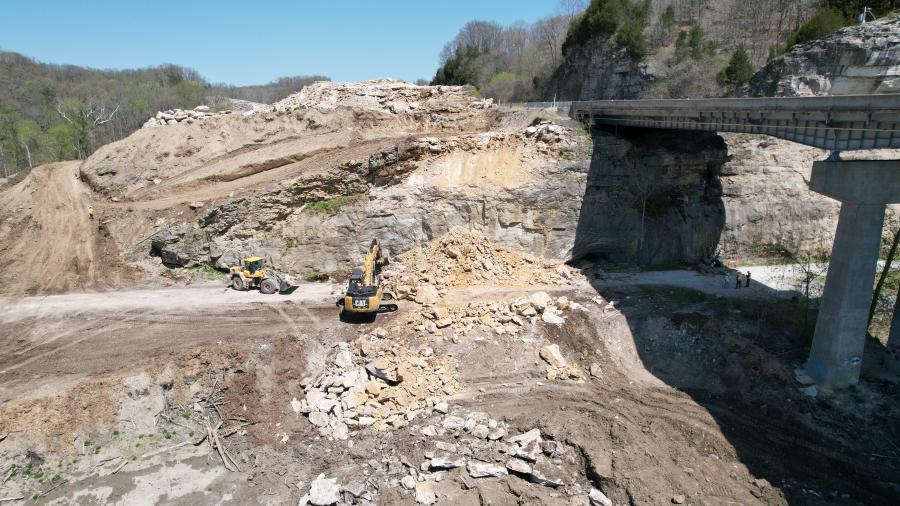 Construction is on schedule, with the westbound bridge expected to be completed in late spring 2023, and the entire project finished by the end of 2024. The contract price for the design-build project is $218.5 million.

Lepper noted that motorists have not experienced any major delays.

"So far, traffic has been impacted for nighttime lane closures during rock hauling operations for construction access, and median shoulder strengthening to shift the eastbound and westbound lanes toward the median to allow construction traffic access to and from the site. The only other impact we've had are rolling roadblocks with the assistance of highway patrol during blasting operations.

"For the safety of the traveling public, traffic is slowed to approximately 35 mph, to allow a clear blast zone and the ability to clear the roadway of any debris that may have entered the lanes. Those impacts are normally once or twice a week for approximately 15 minutes. In the future, rolling roadblocks are likely to continue in the next several weeks. Nighttime lane closures are expected to resume for pavement reconstruction and median work later this year."

Lepper said MoDOT received positive feedback from a virtual public meeting regarding replacement of the bridge.

"Knowing MoDOT was eliminating the extensive rehab project that would cause three to eight-hour backups, the public has always been very positive about the project. During the meeting, learning that they were receiving two bridges each wide enough to carry four lanes of traffic for emergencies or future maintenance work and receiving three lanes in each direction from the UPRR to Rte. BB was received very well."

According to Lepper, one of the biggest challenges on this project is the Missouri River.

"The water elevation fluctuates significantly in short amounts of time. When construction started, the river was very low and would not allow barge movement, then eight months into construction we saw it reach minor flood stage, which slowed our progress on drilled shafts. The river has since gone back to a manageable level."

Construction is progressing, with major progress being made on the substructure of the westbound bridge and fill areas on both the east and west side of the river. Work continues on the remaining drilled shafts and pipe pile bents for the westbound bridge.

Lepper said excavation of rock from the east abutment adjacent to the Katy Trail required a great deal of planning. 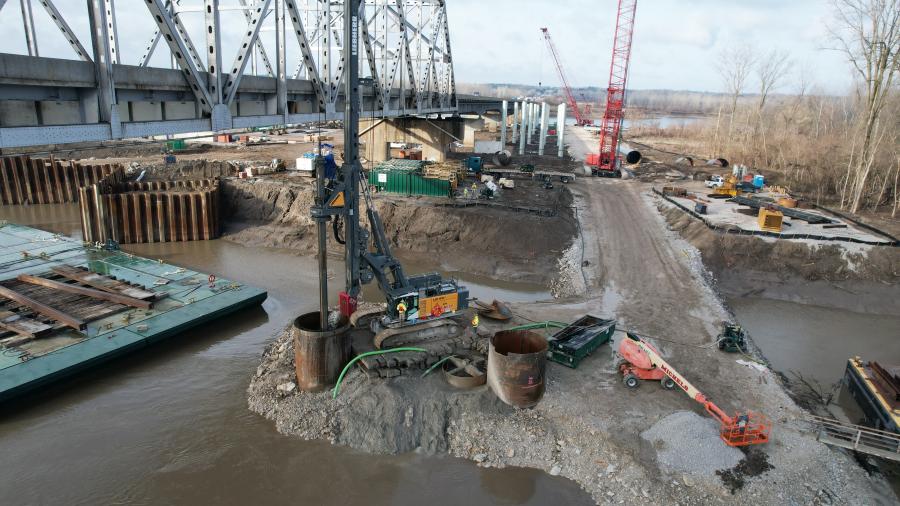 The initial blasting was used to remove a significant hill of rock.

"This gave us the area needed to begin excavation for construction of the east abutment. Additionally, we will be drilling near the Katy Trail for bent 15 drilled shafts."

"These tests give us the information needed to design a stable foundation for the bridge. The information also allows us to check soil or slope stability. This assessment is essential for the safety and sustainable development of roadway fill areas."

Approximately 350,000 cu. yds. of materials will be moved during construction. Significant work remaining includes completion of the drilled shafts; pouring caps; installation of concrete and steel girders; forming and pouring the deck; and pouring the traffic barriers on the westbound bridge.

"Another key task will be finishing the grading and beginning paving on both the east and west side of the river bridge," said Lepper. "There also will be median work throughout the corridor installing new drainage, along with the addition grading and paving a third land from Rte. BB to the railroad bridge on the west end of the project. Once these are completed, traffic will be diverted to the newly constructed bridge. Then the existing bridge can be demolished, and construction can begin on the eastbound bridge."

Crews also will be keeping a close eye on the weather.

"The rain that we've had does affect the river elevation, which in turn slows some work on bridge elements. However, we have plenty of work outside the river area that continues during these short times of river fluctuation. We are already making plans for work this winter to protect our concrete pours through the colder months.

"The river always provides us with challenging issues. We saw a near record low in the Missouri River when we started our construction, which did not allow the barges to float. There were several barges that were actually grounded on the bank during this time."

The key is the variable position counterweight, which allows crews to pick heavier loads while on a barge, without the use of a ringer or larger barge platform. Two 300-ton Manitowoc 2250s lattice boom crawler cranes will eventually spend time on barges to set the precast concrete girders over the scour hole.

Other machinery includes a 275-ton Terex HC275 lattice boom crawler crane on a 60-ft. by 160-ft. by 10-ft. barge; a 230-ton Manitowoc 888 lattice boom crawler crane for dock wall support; a 90-ton Grove GRT8100 rough terrain crane; an APE D125-42 diesel pile hammer for the 48-in. pipe piles; two ICE 50B vibratory hammers (including one with a dual jaw setup for vibrating in the pipe piles and a single jaw setup for sheet piling for the dock wall); and an ICE 110C vibratory hammer with a quad jaw beam setup for driving and extracting drilled shaft casings. 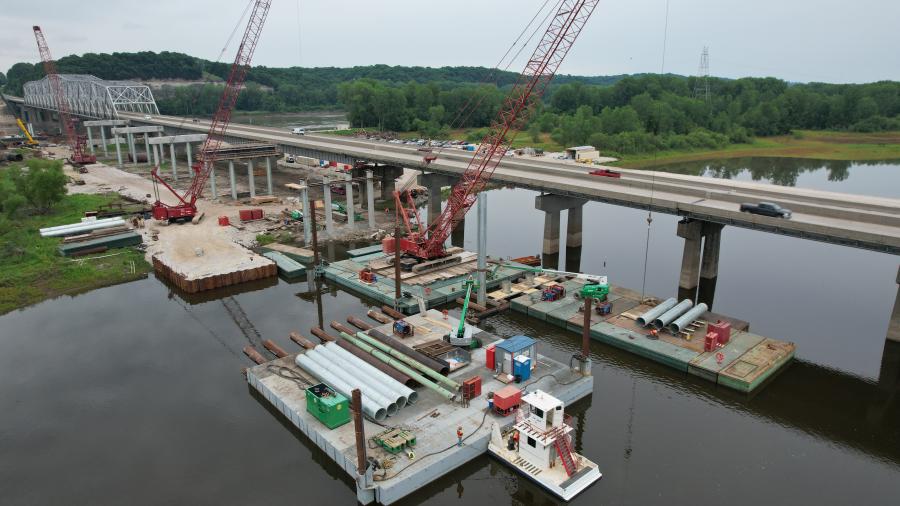 "To this point, working on getting access to the river and access on the river has been the most time-consuming," said Lepper. "This work, although not part of the final bridge construction, is essential for both material and equipment deliveries. Because this work is in an environmentally sensitive area, great caution was used during the construction of our access road to limit the amount of disturbance and to be good stewards of our environment."

For Lepper and the rest of the team, the hours will be long, but worth the investment.

"This project is very exciting, especially when thinking about how the bridge will serve not only the citizens of Missouri, but also freight and travel for people in all the lower 48 states. We're working to make the entire corridor safer for many more years to come." CEG