Mabe Steel Makes Its Mark From Maine to Mississippi 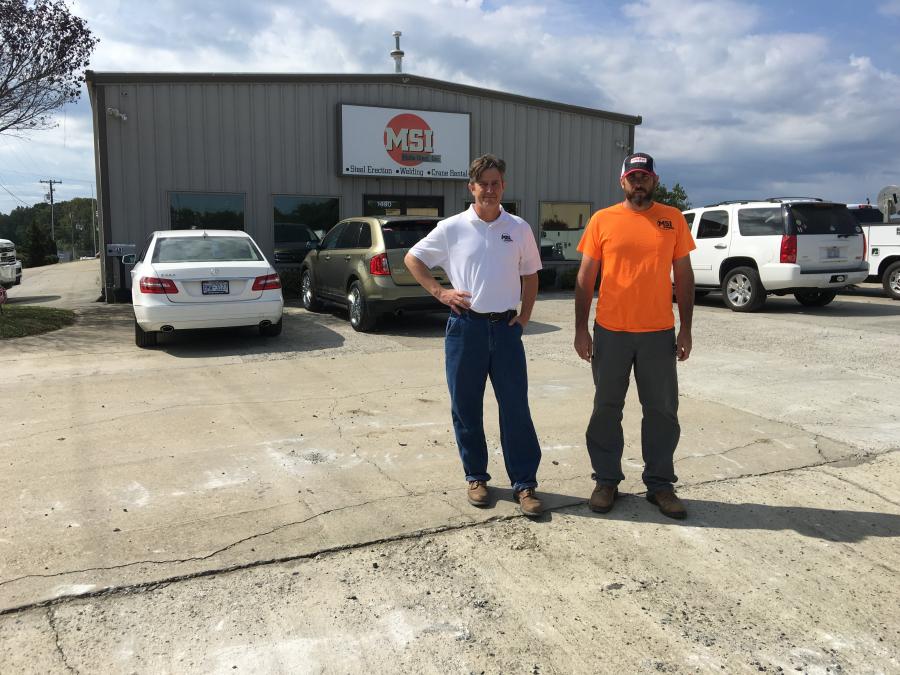 Mabe Steel Inc., based in Kernersville, N.C., is run by Bryan Mabe (L) and Josh Church.

In 2007, Bryan Mabe, a successful entrepreneur, offered to help his father-in-law, Ron Stroupe, because he was retiring from the industry. Stroupe's request came at an ideal time — Mabe had recently sold his mobile automotive restoration business, which marketed directly to car dealerships. His kind gesture eventually evolved into a successful steel erection business — Mabe Steel Inc. of Kernersville, N.C. While he was working with Stroupe, he met a subcontractor on a job that could not handle an upcoming project. Mabe saw an opportunity and asked him if he could take on the job.

“He basically said yes, or he'd give me a smaller job to do before that,” said Mabe. “We were in Pennsylvania working —that was in January 2007, and he had another job coming up about an hour away from where we were in Pennsylvania. A subcontractor he just hired backed out of the job, so there was an opportunity and I jumped on and started laying metal decking — that's what we did for him initially.”

However, within eight months the subcontractor retired, and Mabe — with the help of two employees — began traveling the country, installing metal decking on industrial distribution centers and various other structures, subcontracting through other structural steel erectors. While Mabe was working for other companies, he noticed a need for quality erectors, so he began pursuing his own steel erection projects in the latter part of 2009. The company also purchased its first forklift and began setting steel. A year later, Josh Church came on board after working with Mabe's father-in-law. Church also had experience in the steel erection business.

“In January 2010, Josh reached out to me with an idea about partnering up together and moving forward with my business,” said Mabe. “I knew that going forward I needed a good man around me so we joined forces in January of 2010. At that stage, I was just getting started doing steel erection work. I had just stopped working on metal decking, and started subbing whole jobs from steel fabricators or general contractors. In 2010, we hit the steel erection side of this business pretty hard. We went after as much work as we could.”

Today, Mabe Steel Inc. completes steel erections on industrial and retail building projects from Maine down to Mississippi, including all of the southeastern states.

“We just recently did a Bass Pro job right around Chattanooga, Tenn. We have worked a lot in Tennessee, and that shopping center in Sevierville has a Dick's Sporting Goods, Hobby Lobby, Staples, Mattress Firm and many other retail locations. We are getting ready to go to Nashville, Tenn., for a 1 million sq. ft. distribution center for Lowes Home Improvements.”

Mabe Steel Inc. uses a small fleet of cranes on these projects, including its newest purchase — a Link-Belt TCC-750 75-ton telescopic crawler crane from Pinnacle Cranes. The company already owned a Link-Belt HTC 8650 series II and a Manitex 40124S. Mabe said there were several reasons why he purchased his newest Link-Belt.

“We wanted a telescopic crawler, and they make about four models,” said Mabe. “We chose the TCC-750 model because it's the highest capacity model that Link-Belt makes and still ships in two loads. The house ships, and all the counterweights ship on separate loads, so we knew we wanted a telescopic crawler. That crane fit our system better because it's easier to move.”

According to Mabe, when his crew unloads the Link-Belt TCC-750 off the truck, the crane hydraulically spreads out to 17 ft., and the crane can be hauled with its tracks attached, which saves him time on projects.

“The biggest reason we bought it is because we don't have to move the crane in the traditional sense,” said Mabe. “We don't have to jack outriggers up and move the outriggers to the new location — we simply crawl that crane forward as we are working. We never have to break it down to move it on the job. That was the biggest thing for us. It just saves a lot of time between set ups at the crane on the job.”

Mabe said that he is pleased with his decision to purchase the crane and that he believes the crane will increase efficiency on the job. He also is pleased with the service he has received from his Link-Belt dealer, Pinnacle Cranes.

“Pinnacle Cranes has an office in Charlotte, so it's very easy to get mechanics up here or call down there and talk to them,” said Mabe. “We have few different mechanics we call all the time for trouble shooting problems. Most of the time, you can normally call and get a mechanic the next day. They have most of the parts in house at Pinnacle Crane. That's probably the biggest advantage.

“We are familiar with Link-Belt products, and we have local representatives local that we can get a hold of. We felt that this crane was the easiest to mobilize, to take counterweights off and would work best for our company.”

According to Mabe, his job is very rewarding.

“I like seeing our work at the end of the day. I like seeing a building go up and changing the landscape of the city, it's neat. And, of course, all the machinery and everything else about the business are appealing to me as well. I also enjoy the traveling we do as a company.”