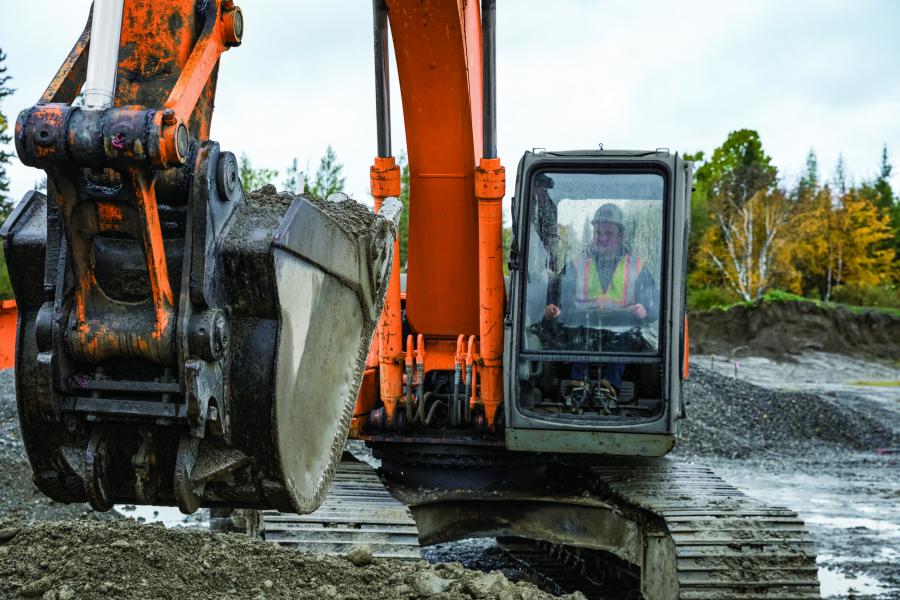 M&H Logging and Construction in Rangeley, Maine, has been loyal to Hitachi since 1987.

It only took 10 minutes for Scott Millbury and Joe Haley to get hooked on Hitachi. It was 1987, and a local dealer rented a brand-new Hitachi 200 to Scott and Joe, co-owners of M&H Logging and Construction in Rangeley, Maine. They still talk about that day like it was yesterday. 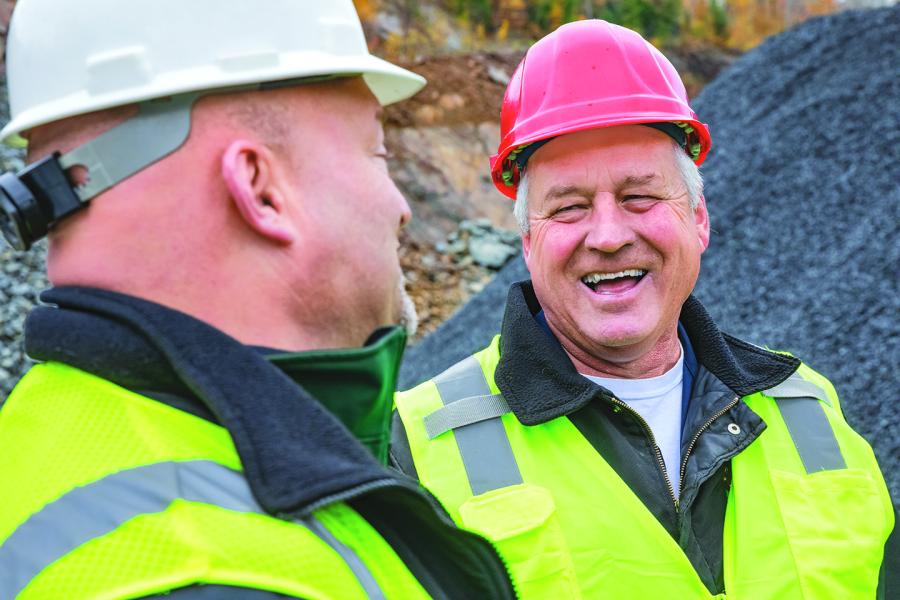 Scott Millbury is a co-owner of M&H Logging and Construction.

"We'd never seen a Hitachi, never mind tried one. I ran the machine first and I immediately got off and had Joe jump on the machine," Scott said. "It was like light years ahead of everybody else. I mean they knocked it out of the park — it was like everyone else was a ‘one' and Hitachi was a ‘10.' In 10 minutes, we knew we were going to buy it, and we've been buying them ever since. They're great machines."

Scott and Joe, who are cousins as well as business partners, started the family business in 1981. Initially, they completed forestry work, and in the mid-1980s, began taking on construction work. Today, M&H specializes in residential and commercial earth work and logging, and owns a few quarries, among other subsidiaries.

Joe's son, Kyle Haley, also works for the company as an operator. After all, he was raised in the family business.

"Growing up, a lot of kids my age were out in the sandbox playing with Tonka toys and stuff, and I was there with a Hitachi 200 picking in the sand piles," Kyle said. 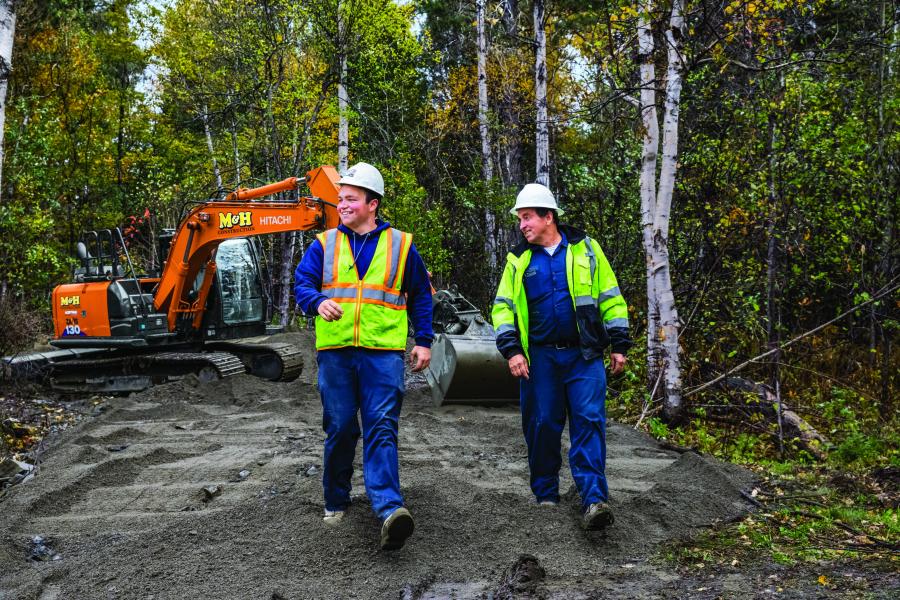 Kyle Haley (L), works with his father, Joe Haley, at M&H Logging and Construction. Joe co-owns the company with his cousin.

While Kyle holds an MBA, he truly learned the family business out in the field.

"It's been awesome growing up in this business," Kyle said. "My father and Scotty have involved me with the operations, overseeing road jobs and local projects in town. I've always had the ability to run equipment, and that's how I learned the trade, in a sense."

"The competition just cannot compete in our view," Kyle said. "That is why our older Hitachi excavators are still in our fleet; it is a testament to the Hitachi durability. Turn the key and go to work."

As an operator, Kyle also understands the equipment firsthand.

"Personally, I enjoy the hydraulics of the machines," Kyle said. "They seem to be much smoother and more fluid than any competitor machine I have run in the past. The overall design of the machines is superior as well, with emphasis on operator comfort."

Rangeley, Maine, is a four-seasons town in a lakes region. It's quaint with a population of about 1,000 that booms throughout the year with vacationers and tourists looking to enjoy the outdoors — whether it's summer days on the lake, fall foliage or snowmobiling.

There are no stoplights, and it's the kind of place where the locals know each other — Scott's sister runs a local café and bakery. Everyone also is used to seeing M&H's Hitachi excavators completing work around town. 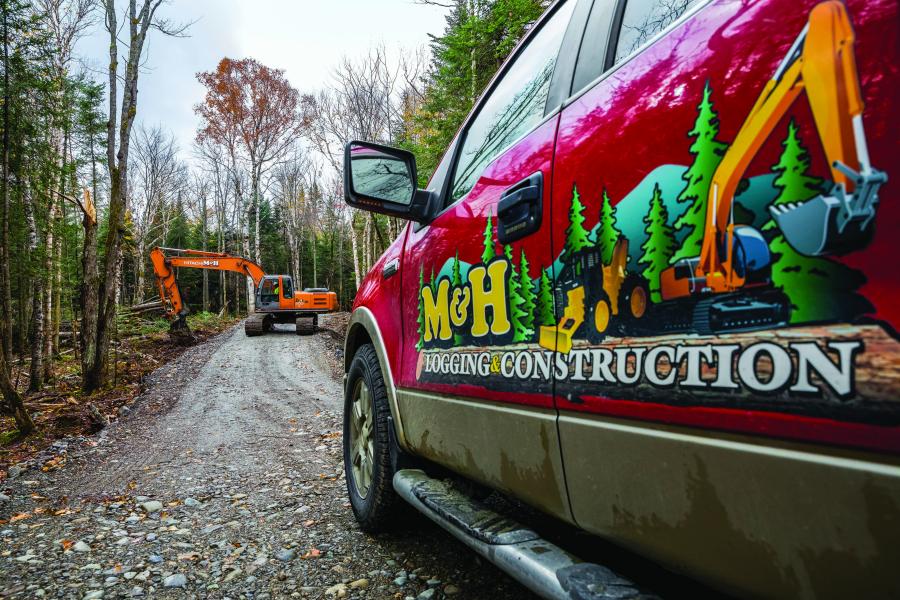 "We do all kinds of jobs in the construction dirt world — from $1,500 jobs up to multimillion-dollar jobs in town and around the area," Scott said. "We definitely have varying conditions up here from 80 degrees to 40 below so it's a struggle, you know. But Hitachi handles it very, very well."

The company's newest addition, a ZX130-6, has proven itself to be a perfectly packaged machine on jobs.

"We've found great versatility in the 120- to 130-sized machine," Kyle said. "It's just small enough for our residential work but also large enough for some of our commercial applications as well. Rangeley has a lot of tight streets that we work on, so the size is great."

"The Hitachis are really quiet and smooth," Joe added. "That's nice especially for the residential work."

M&H's fleet expanded during the ‘90s as the company took on more construction work. That fleet has remained an all-orange Hitachi line-up and now ranges from a ZX35U-3 up to a ZX330LC. 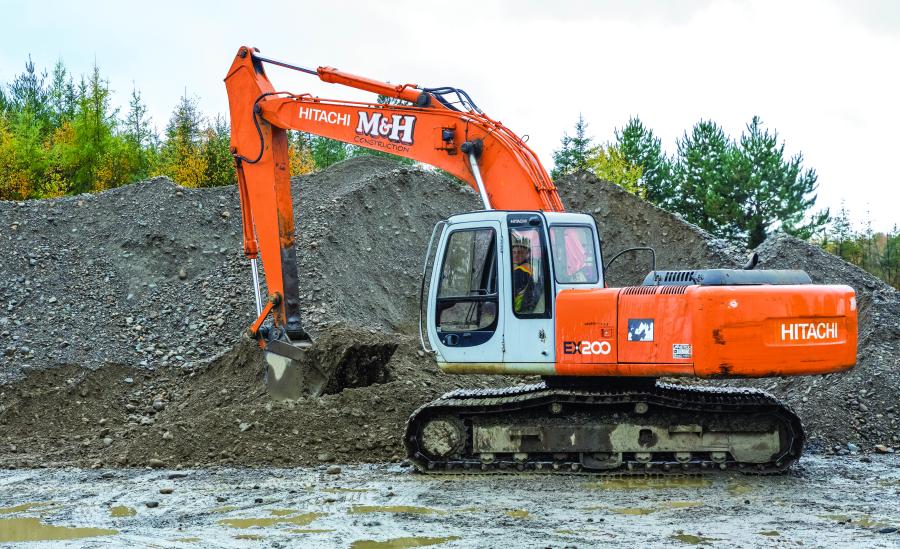 "That first Hitachi 200 left a true lasting impression," Kyle said. "My father says it was the ‘Cadillac of excavators'."

In fact, Joe's fleet favorite today is still a 200.

While M&H owns Hitachi equipment, the guys continue to compare other brands whether it's on their own turf or at a tradeshow.

"We own Hitachis, but if you need something short-term, you've got to rent what's available," Scott said. "So we run other brands and, you know, we've still not been satisfied that they're up to the Hitachi standard."

"Every three years, we also go to ConExpo in Las Vegas," Joe said. "We learn quite a bit about the different brands at that show."

Scott added that for M&H, it all comes down to reliability. At the end of the day, he said, your machine is either running or it's not.

Carrying On the Legacy

Scott, Joe and Kyle all agree that the company's success is not only due to dependable equipment but also to the people around them. 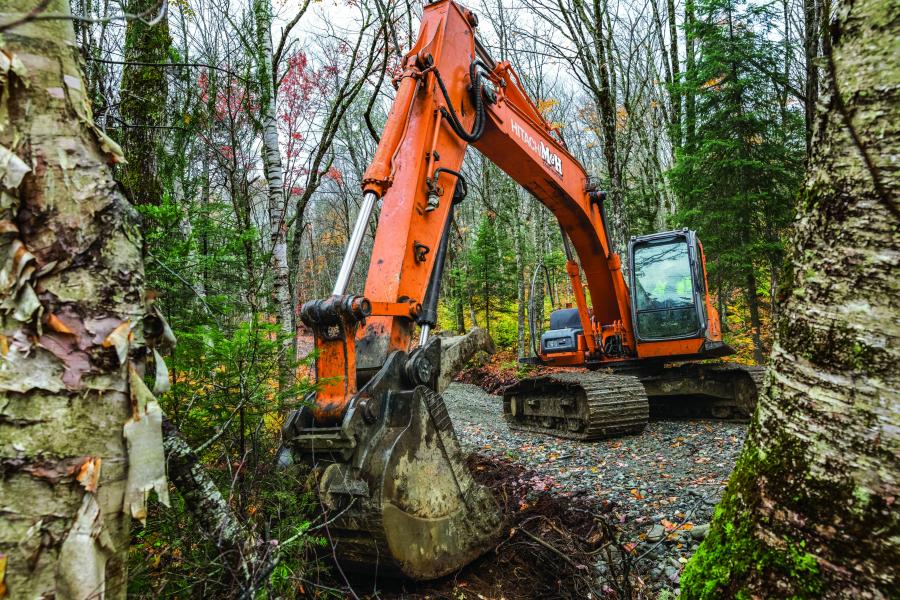 "You can't grow without a good crew, and we really have a good crew that do a great job," Scott said. "We appreciate them, and if it wasn't for the crew, we couldn't build a company like this. And because we have a great crew and equipment, and everything goes well, it's really a well-oiled machine at M&H."

"Mike Turner, our salesman, has been with us for over 30 years," Joe said. "Nortrax is a good company; they take care of us. The people there understand what uptime is and that downtime just doesn't work."

As M&H continues to evolve as a company, the guys agree that Hitachi will continue to be in the lineup.

"The reason we keep buying Hitachis today is they're great machines," Scott said. "They're very smooth; they're very fast; they have finesse. For us, Hitachi set the bar in '87, and since then, every other brand has been trying to meet Hitachi's quality."

M&H Logging and Construction is serviced by Nortrax, Westbrook, Maine.