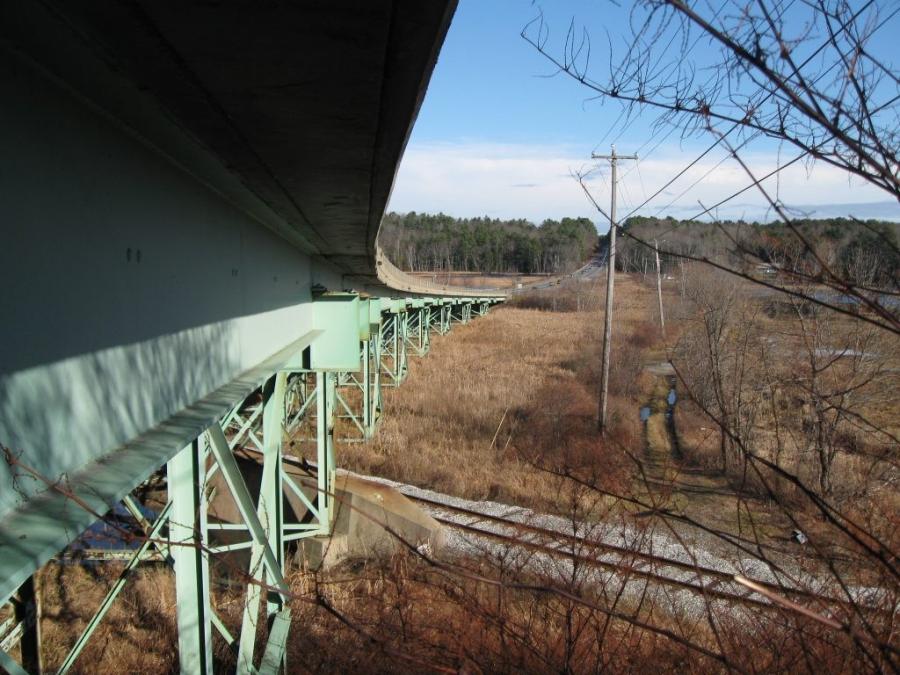 The Station 46 bridge on Route 1 in Woolwich, just north of the Taste of Maine restaurant, is slated to be replaced in the coming years after a 2017 evaluation found structural deficiencies in the 86-year-old bridge. (Devan Eaton photo)

Bridge replacements in three southern Midcoast Maine towns are among the thousands of upcoming projects included in the Maine Department of Transportation's (MDOT) three-year work plan released in late January.

The replacement of the Station 46 bridge on U.S. Route 1 in Woolwich is among the priciest projects outlined in the report, with a price tag of $32.5 million.

When the steel bridge, located just north of the Taste of Maine restaurant, was built in 1939, it was expected to last about 75 years. More than 80 years later, the bridge is still structurally sound and carries an average of 19,000 vehicles each day, but needs to be updated to today's construction standards, said MDOT Project Manager Devan Eaton.

According to MDOT spokesperson Paul Merrill, the department plans to advertise the bridge replacement project for bids in September, with construction beginning as soon as late fall of this year. Merrill said the project is anticipated to be finished in 2024.

In nearby Brunswick, the Frank J. Wood Bridge connecting Brunswick and Topsham is slated to be replaced for $21.8 million after significant corrosion was discovered on the 1932 steel truss bridge, which sees approximately 19,200 cars daily.

Merrill said the state transportation agency plans to start seeking bids for that bridge replacement in July, but a lawsuit filed against the MDOT and the Federal Highway Administration has slowed that process and driven up the cost.

"Continued legal action could push this date out further," he added. "If it advertises in July, construction could begin as soon as late fall. If that happens, our anticipated completion date would be in 2025."

Built in 1957, the Desert Road Interchange bridge sees 9,408 vehicles per day, and the Mallett Drive interchange carries 16,878, according to data from the MDOT.

Plans call for adding a 12-ft.-wide bicycle and pedestrian path to both bridges in tandem with the upcoming project, something that Freeport residents will need to vote on in March to meet the MDOT's timeline.

The state transportation department agreed to split the cost of a multi-use path added to the two bridges with the town, said Wayne Frankhauser, MDOT bridge program manager, which would have cost the community $480,000. However, because Freeport decided on a 12-ft.-wide path, taxpayers must foot the bill for the added 2 ft., bringing the total to $634,000.

Adam Bliss, Freeport's town engineer, said "eight feet is considered the absolute minimum in terms of multi-use path widths, 10 feet is preferred, and 12 feet is ideal," because it allows two bicyclists to pass in opposite directions.

Merrill said the MDOT plans to advertise the two overpass bridges for bid in September with construction beginning as soon as this winter. The anticipated completion date for both bridges is late 2024.

Although some projects have been hindered for assorted reasons, the MDOT does not anticipate any future construction holdups due to COVID-19, Merrill said.

"We did have some construction delays in 2020 due to COVID-19 [delays in getting materials and some labor shortages], and we are working with contractors on a case-by-case basis to avoid similar issues moving forward," he explained.