The $170 million bridge replacement is a joint-venture between the Maine and N.H. Departments of Transportation, with MaineDOT serving as the lead. 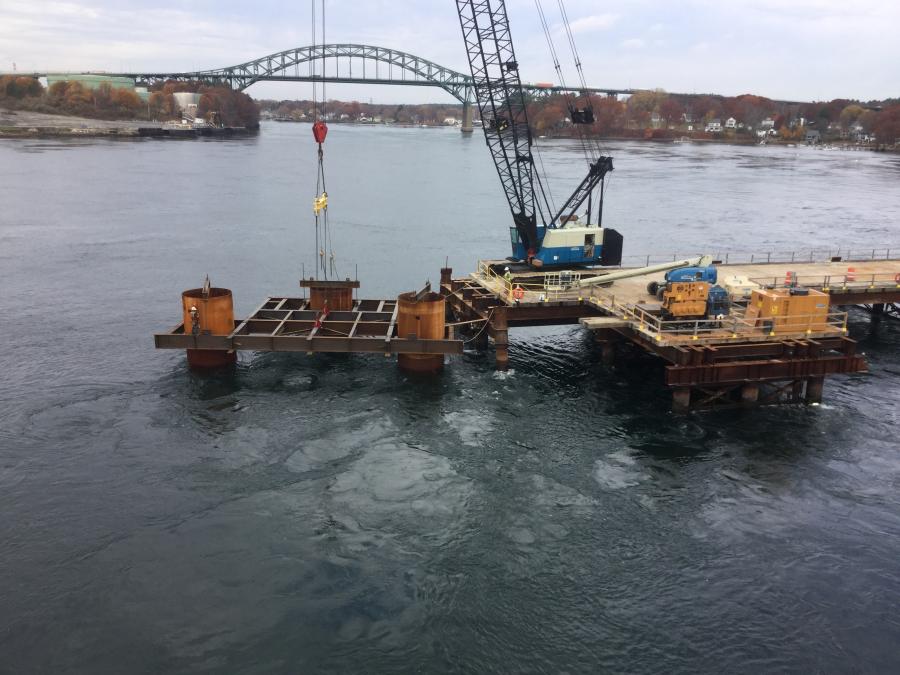 MaineDOT photo. The $170 million bridge replacement is a joint-venture between the Maine and N.H. Departments of Transportation, with MaineDOT serving as the lead.

Crews from the Maine-based Cianbro Corporation began the reconstruction of the existing Sarah Mildred Long Bridge (SML) that links Kittery, Maine, and Portsmouth, N.H., last January and are proceeding on schedule to have the new bridge open to traffic in September 2017.

The $170 million bridge replacement is a joint-venture between the Maine and N.H. Departments of Transportation, with MaineDOT serving as the lead.

“This project is part of a 'three bridge agreement' between the two states to address their jointly owned bridges spanning the Piscataqua River,” stated MaineDOT Web page. “The other two bridges are the 'high level' bridge that carries I-95, and the Memorial Bridge that links the communities of Portsmouth and Kittery, and offers vehicle, bike and pedestrian travel.”

Built in 1940, the SML bridge is a regional link between Maine and New Hampshire, and is a critical back-up route in case of disruption on the Interstate 95 bridge. The bridge is a major commercial artery along the U.S. Route 1 bypass, and crucial to the Navy shipyard in Kittery, which employs 4,200 people, in terms of access for workers and goods.

“Maine and New Hampshire agreed to replace Sarah Mildred Long Bridge instead of implementing the rehabilitation project outlined in the March 2011 Memorandum of Agreement between Maine and New Hampshire regarding the three Piscataqua River bridges,” stated the Web page, which noted that the DOTs are splitting the cost 50/50.

“The existing bridge was designed with an estimated life span of 50 years,” said Ron Taylor, MaineDOT's resident engineer on the SML replacement project. “With proper maintenance and periodic inspection it has lasted 77 years — performing well, enduring the harsh environment of the Piscataqua River. The structure has sustained structural deterioration that warranted the replacement of the bridge with a new structure.”

For more detailed information on the lessons learned in terms of rehabilitation of older bridges and how the DOT can better look after these structures, Taylor suggested reading the 2014 Keeping Our Bridges Safe Report, which can be found at http://www.maine.gov/mdot/.

In September 2014, a $25 million TIGER (Transportation Investment Generating Economic Recovery) Grant was awarded for the rail portion of the bridge.

The design process began in 2013, with the design prepared by the team of the Figg Enginering Group/Hardesty & Hanover LLC. The “open process” consulted stakeholders in several forums and came up with a design that was functional and aesthetically pleasing.

“The new 2,800-foot bridge will be constructed at a higher elevation than the existing [bridge], with a vehicular structure stacked over a railroad level,” stated the Cianbro Web page for the project, “as well as a longer lift span at 300 feet. Other differing characteristics include long open spans, fewer piers, and wider shoulders.”

The “new bridge alignment improves marine navigation by straightening the navigational channel, allowing larger ships to access the port and shipyard,” according to MaineDOT.

With a a larger 56 ft. (17 m) vertical clearance in its “resting” position, “there will be 68 percent fewer bridge openings, in the normal operating, 'resting' position, the bridge's lift span is at its middle level, allowing motor vehicles to cross the river. The new bridge's movable 'hybrid' span lifts up to allow passage of tall vessels and lowers to railroad track level for trains to cross,” according to MaineDOT.

“The new bridge will see an increase in traffic as it will not be restricting load weights, as it is currently,” said Taylor. “Facilitating the rail traffic was a big factor in the design of the bridge. It serves the PNSY — that is of great importance to the Department of Defense and economically to both the states of Maine and New Hampshire. This project provides for rail service across the river tying into existing rail service. Coordination between the PNSY and PanAM has been ongoing through the design and construction process. The project to date has been ongoing for 476 days without a lost time injury.”

Mike Hawkins, a principal of Hardesty & Hanover and its senior project manager, also commented on the design process, noting that the CM/GC process had a positive impact in the design of both the vertical lift towers and the lift span.

“As design progressed, an excellent site for casting concrete segments adjacent to the bridge became available and thus made precast construction a viable option for the towers,” he said. “We developed a precast segmental tower alternative that was included in our 60 percent submission. Both the precast and cast in place construction [with self-climbing formwork] alternatives were priced by the CM and ICE and the precast alternative was selected as the preferred lift tower fabrication/erection alternative.

MaineDOT has worked to come up with a traffic plan that minimizes the impact.

“Traffic will be impacted for around 10 months at the end of the project as it intercepts the old bridge at the Kittery side,” stated a press release. “The Long Bridge will have lane closures as needed, and as weather permits, from 8:00 a.m. to 3:30 p.m. daily for up to six days. Flag persons, electronic message signs and warning signs will be used to notify motorists of lane closures.”

The bridge is being constructed via a construction manager/general contractor alternative delivery approach.

“This approach was taken to better understand the risks involved in the construction process and address them during the design process, ultimately saving on the cost of construction,” said Taylor. “The process is being evaluated and I would anticipate it being used again for other potentially high risk projects. The process has worked well for this project, collaborating on the project has been instrumental in this being a successful process.”

Cianbro is satisfied with the pace of the construction and the cooperation between it and the DOTs.

There will be well over 100 construction workers on-site at peak periods, with most of the work being done during day shifts. The major subcontractors include: Case Foundation for drilled shaft installations; and Shaw Brothers Construction for earth work and paving.

The project will require a variety of equipment, including cranes, drilled shaft equipment, barges, excavators, and other support equipment.

“The work schedule was developed with input from the contractor during the CM/GC process attempting to minimize impacts to the traveling public and surrounding communities,” said Taylor. “Communication between the DOT and Cianbro is extremely important to the project. Dealing with unanticipated circumstances, requests for information, and reviewing submittals in a timely manner is necessary to maintain the project schedule.”

Environmental concerns also are being addressed to minimize the impact on the river.

“The majority of work for the new bridge is being performed from temporary trestles in close proximity to the location of the new bridge,” said Taylor. “No work is occurring over open water, and every effort is being made to prevent any debris from falling into the water. Demolition will occur in stages; the existing bridge will be demolished and floated out in large sections. During demolition an environmental pollution control plan will be followed and monitored.”

Cianbro has been involved in many bridge projects in Maine and its input is welcomed by MaineDOT.

“Cianbro's knowledge of heavy structure construction was important to understanding the construction related to the project from their perspective and being able to design for anticipated construction techniques,” said Taylor. “Incentives are in place to achieve key milestones like opening the new bridge to traffic and completing the project. On the other hand, disincentives are also in place should these milestones not be achieved.”