Major Traffic Conduit Gets $97M Worth of Attention 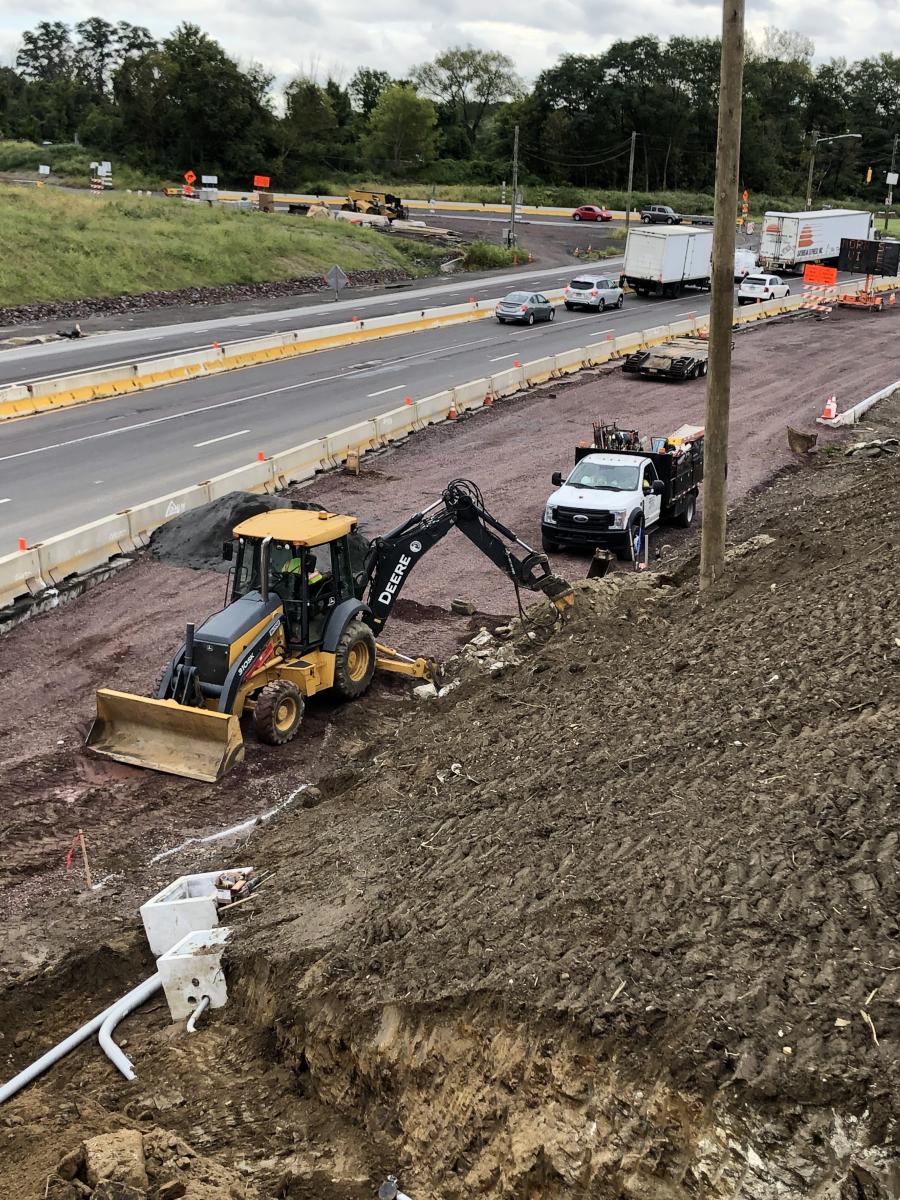 In Bucks County, Pa., construction continues on the four-year, $97-million U.S. 1 Improvement Project in Bensalem Township. The goal is to improve safety and reduce congestion for commuters and local traffic traveling between Bucks County and Philadelphia.

"The overall purpose of the U.S. 1 Improvement Project is to replace and repair aging bridges, while also incorporating highway and interchange safety enhancements to facilitate safe and efficient inter-modal travel along the U.S. 1 corridor to meet both current and future transportation needs of the area," said Brad Rudolph, PennDOT deputy communications director.

The needs identified within the project corridor include replacing old bridges that are considered to have deficient structural integrity and substandard lateral and vertical clearances.

The project was designed to improve both traffic and pedestrian safety. As part of the plan, the work was divided into several sections.

"Construction of Section LHB was complete in 2014," said Rudolph. "This section contained a bridge at the northernmost project corridor interchange, Route 413/Maple Avenue, which was the most structurally deficient bridge in the corridor, and could easily be separated as a standalone project. Section RC1 and RC2 cover the southernmost 2.75 mi. of the corridor beginning at the Philadelphia/Bucks county line and consists of four closely spaced interchanges — Route 132, the PA Turnpike, Rockhill Drive/Neshaminy and Business U.S. 1/Penndel interchanges. 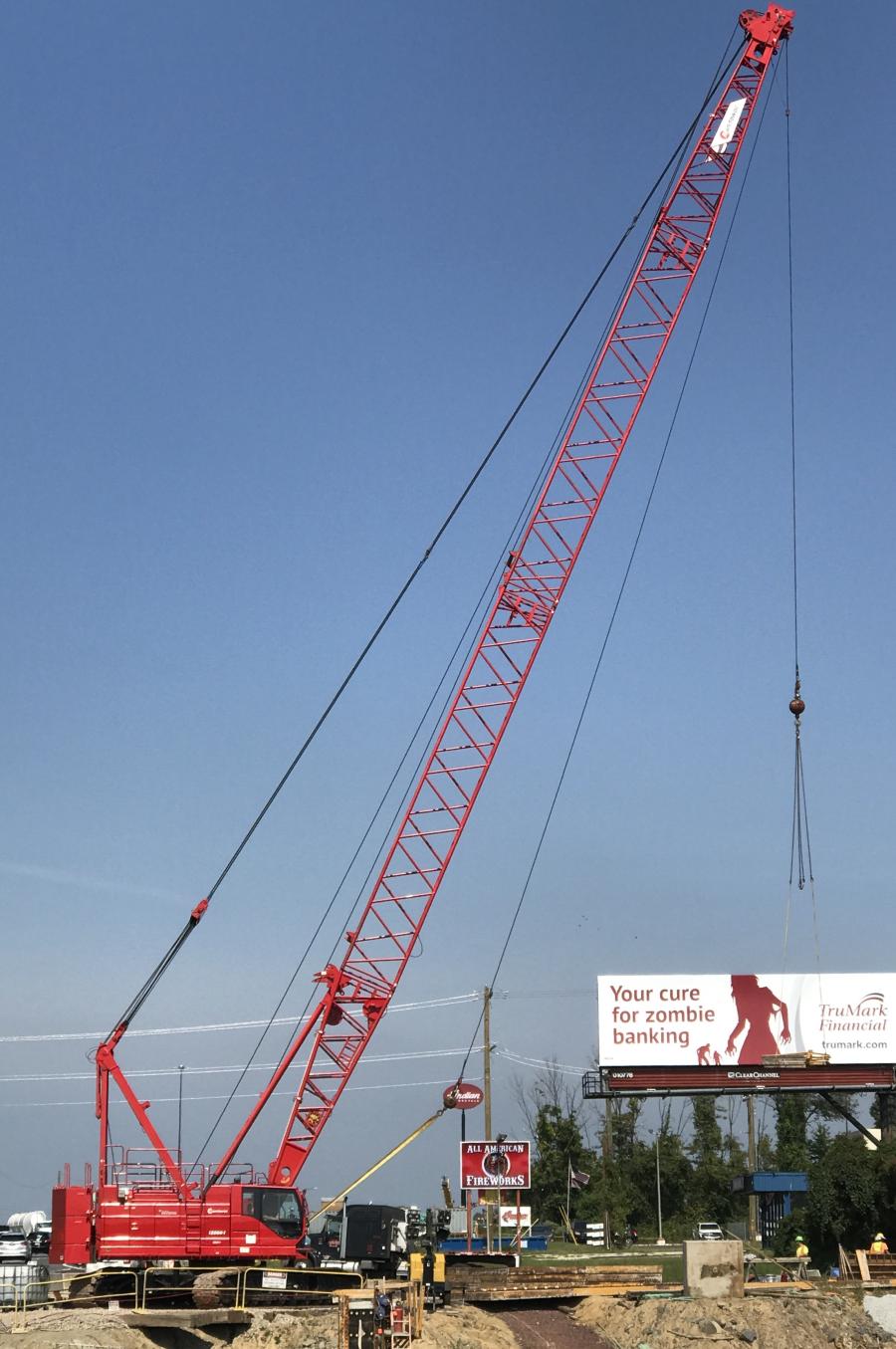 "Sections RC1 and RC2 were initially designed as one continuous project and then split, to create two smaller more manageable projects that more contractors would be able to bid. To facilitate transition between construction contracts, the split of RC1 and RC2 occurs where the proposed U.S. 1 profile is close to the existing profile."

Sections RC1 and RC2 are a different access approach, typical section and level of traffic congestion than the final Section RC3 to the north. The SR 0001 Section RC3 portion of the corridor is a service road corridor, which is a very different means of access, compared to the interchanges.

"Additionally, the corridor is abutted by the Neshaminy Mall and multiple residential developments either adjoining or within close proximity. Lastly, there is an emergency services training center and a horse racing/casino nearby. U.S. 1 in this area is a major conduit between Philadelphia and New Jersey, as well as providing a link between Interstate 95 and the PA Turnpike."

According to Rudolph, the biggest challenges on the project include coordination with utility companies and property owners.

"In some cases, utility relocation precedes staged construction, making the timing and completion of the work very critical to overall project schedule. Almost daily communication with utilities is maintained, and work-around plans by the owners are constantly being explored to mitigate any impacts by the utility companies.

"Additionally, the contractor is to maintain communication with property owners along Route 1 Northbound, where they will be widening and encroaching on private property to rebuild driveways and sidewalks. All businesses are to be provided continuous access to properties 24/7."

The condition of the site prior to construction was less than ideal.

"The pavement is deteriorated," said Rudolph. "Many of the existing on/off ramps were not up to current standards for acceleration/deceleration lanes, and caused dangerous conditions entering and exiting Route 1. Also, existing drainage conditions need improvement." 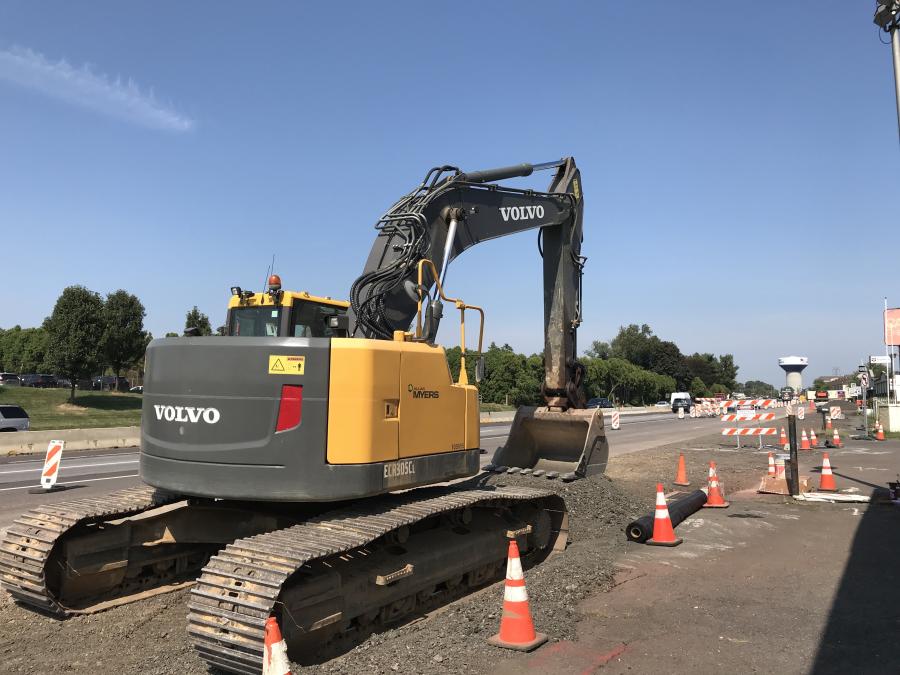 "The contractor is making good progress reconstructing the outer lanes of NB Route 1, and hoping to complete bridge structure and paving by the end of year. This would allow them to get in the next major stage and begin demolition of the middle portion of the three bridge structures over the coming winter 2020, and complete construction of it by the end of 2020. Once the middle is completed, the third and final southbound portion of the job will take place in 2021, finishing in early 2022."

Standard demolition of the bridge structures is occurring overnight, with closures of Street Road (Route 132) and Turnpike Mainline below this overpass. PA Turnpike has allowed the project team to implement strategic detours of the PA Turnpike when important demolition milestones occur.

"Each bridge needs to be demolished and rebuilt in thirds; therefore, carefully planned demolition tactics and traffic coordination to remove structures in sections, as to not to disrupt traffic while maintaining the structural integrity of the existing bridge needed to carry traffic, is the ultimate goal. Additionally, they must provide enough room and clearance to build the new structure adjacent to the old one. Work plans are meticulously reviewed to ensure that what's designed can be put into practice and built in real-world conditions."

"Due to traffic phasing and sequencing, each of the three bridges will be built in three stages throughout the entirety of the project, 2019-2022."

Currently, parapet construction is under way over Turnpike Mainline. Pier and abutment construction is taking place at Street Road (Route 132) Bridge. Crews also are working on roadway embankment and grading at the new Street Road/U.S. 1 interchange.

Construction of the replacement off-ramp from PA Turnpike at Bensalem Interchange Toll Plaza is nearing completion, with concrete pavement and added roadway features. The traffic switch will occur at the end of the month.

A majority of the new retention basin work has been completed, along with a mitigation of a local stream to allow for larger hydraulic capacity to storm water outfalls associated with the project. 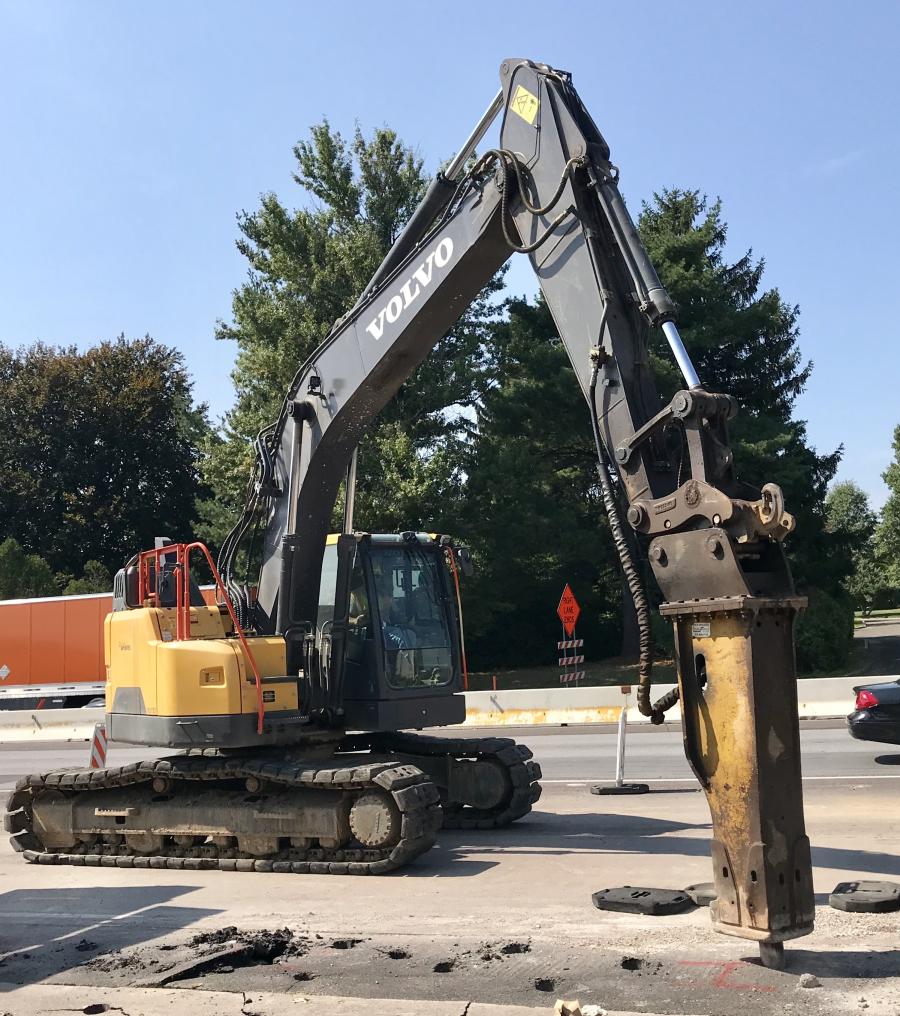 "This will accommodate much of the added drainage that will be installed throughout the remainder of the project, while reducing stormwater run-off to local infrastructure," said Rudolph. "A large portion of utility relocations have occurred, including PECO electric duct bank and service to businesses along Route 1NB, a major sewer relocation for Bucks County Water & Sewer and gas relocation and replacement along Street Road for PECO Gas. The first major stage of construction along NB Route 1 will look to be completed by the end of this year."

Crews have already had to address an unexpected issue during construction.

"An active utility line was discovered spanning the Street Road (Route 132) bridge that was to be demolished. Coordination and a relocation plan was implemented by the utility company, in order to progress the demolition and limit the delay to the contractor."

Rudolph said weather has not been a major problem for crews, although July was unusually rainy. As for site preparation, "The contractor is very strategic about how they mobilize and stage their equipment to not have any wasted motion, to improve efficiency and to reduce down-time for their manpower," said Rudolph. "Material deliveries and shop drawing approvals are scheduled months in advance, to meet vendors' lead times and fabrication schedules."

The project is a waste job, meaning there's an excess of material beyond what can be reused. The contractor has been hauling 100 to 140 truckloads (10 cu. yds./truck) a day, to meet final grades and begin construction roadway pavement.

Approximately 475,000 cu. yds. of dirt will be moved on the project. Main equipment being used includes four to six excavators and dozers, ranging from Caterpillar D20 to a Cat 328D, two Grove 70-ton rough-terrain cranes, one Manitowoc 1000 with 90-ton capacity and a 550-ton Liebherr hydraulic crane and Volvo excavators.

Materials required during construction include:

Rudolph said installing safety enhancements along a 4-mi. section of the expressway from just north of Philadelphia to just north of Route 413 (Pine Street) in Middletown Township and Langhorne Borough has been a significant undertaking. 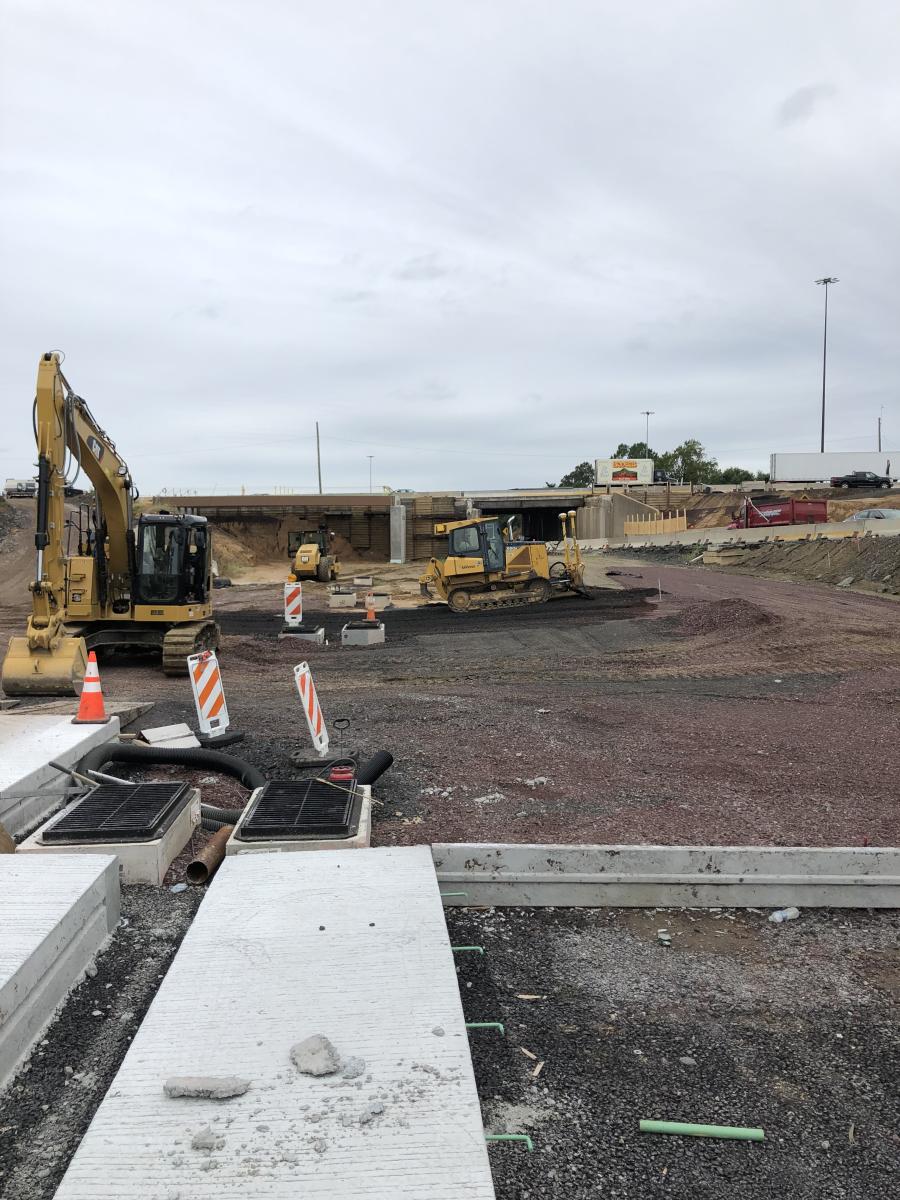 "A thorough and well thought out plan starts during the design process to incorporate modern design standards with the approval and coordination with local and federal agencies. Providing additional lane capacity, as well as shoulders, is crucial for a safe and effective stretch of highway, as well as adding ITS features to alert the public of traffic delays and detour options during incidents.

"Additionally, improving drainage, pedestrian accessibility and safer intersections are all meticulously studied and incorporated in the project to strive for a safer and more inviting stretch of roadway, as part of the local highway network."

The first major milestone will occur in late 2019/early 2020, with crews switching northbound traffic to newly built Northbound Route 1, as well as new on/off ramps to Street Road. After that, the project requires the completion of the middle section by the end of 2020, followed by the third and final southbound portion of the job by late 2021/early2022.

Rudolph said constant communication is key to the project's success.

"Bi-weekly progress meetings are held, and issue-specific meetings tend to happen two to three times a week. Also, the contractor submits schedule updates frequently, with partnering workshops being held with the owner to work through schedule impacts and collaborate on ways to maintain the schedule."

Allan A. Myers Inc. of Worcester, Montgomery County is the general contractor on the project, which is financed through 80 percent federal and 20 percent state funds.