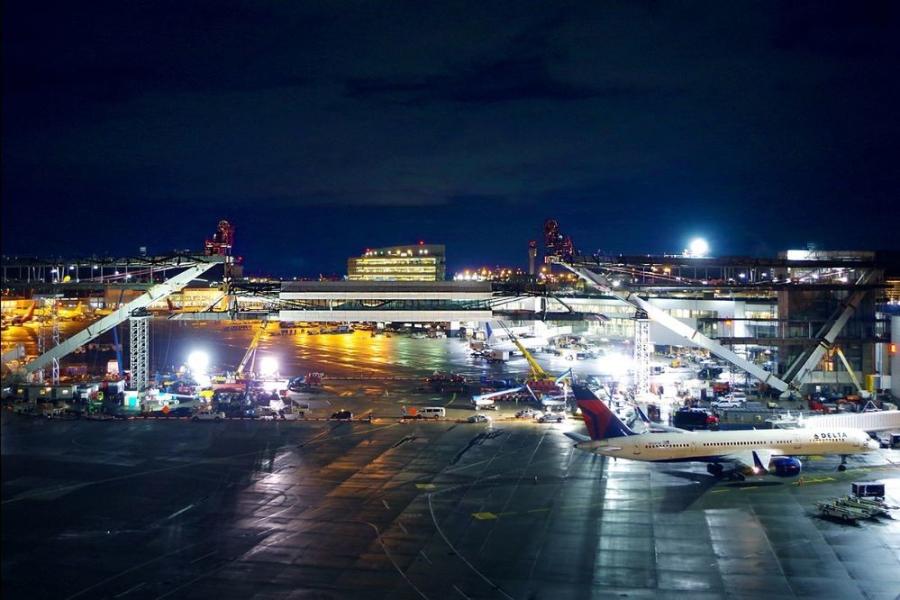 The walkway was transported using a total of 56 axle-lines of SPMTs in a four-point configuration, with one set of SPMTs at each corner.

Mammoet has successfully completed the transport and lift of Seattle-Tacoma International Airport's newest expansion, an elevated pedestrian walkway for the future international arrival's facility. Part of the airport's $968 million expansion, the new bridge is only the second walkway in the world with suitable clearance for a Boeing 747 to taxi beneath.

Despite the various challenges of working at an active airport, Mammoet devised a suitable installation method for the 1,472-ton walkway using the accelerated bridge construction (ABC) method. With its specialized equipment, Mammoet transported and lifted the prefabricated bridge into place. This allowed for an exponentially faster turnaround time, whereas traditional construction methods would have caused significant disruptions to the airport over a prolonged period of time. The entire operation was completed over two nights while flight traffic was at its lowest to ensure minimal disruption to the airport's schedule. 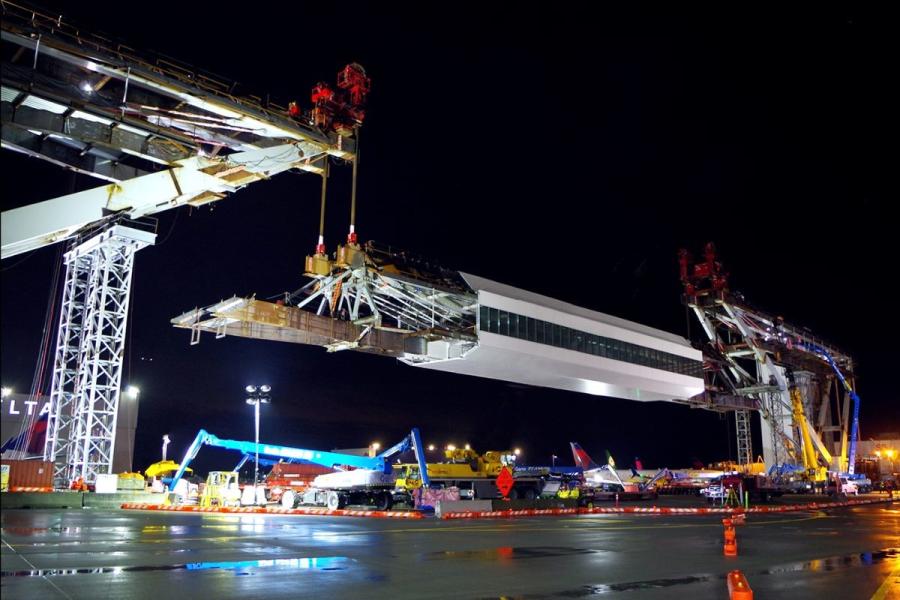 The walkway was transported using a total of 56 axle-lines of SPMTs in a four-point configuration, with one set of SPMTs at each corner. Mammoet's transport team taxied the load a total of 3 mi. down the center runway while shouldering runways remained open for incoming and outgoing planes. Total transport time from the assembly area, to the final destination between accepting V-piers was just under three hours.

Once in position under the piers, erection crews took over using four 900-ton steel frames that utilized a strand jack system. This was the first time these frames from the Netherlands have been used in the United States to control the systems cables which are regularly rerouted downward. In this case, it was required to keep them clear of the work area and ensure they did not interfere with the final weld process below. With approximately 1.5 in. of tolerance for a precise fit, the bridge span was hoisted into its final position, 72 ft. from the ground, before being welded into place.

After nearly eight years of planning, design and construction, the installation has created, at 900-ft. long, the world's longest pedestrian bridge span over an active airport taxi lane. The international arrivals facility is expected to open later in 2020 and alongside other improvements will help double the airport's international passenger capacity to 2,600 per hour.

Mammoet helps clients with smarter, safer and stronger solutions to any heavy lifting or transport challenge. It aims to develop long-term relationships in order to understand its businesses and challenges best, so it can realize the most efficient and cost-effective approaches. It has a unique global network and an unparalleled fleet of equipment. Through deep and longstanding engineering expertise and the highest quality and safety standards in execution we bring an intelligent and flexible approach to projects across a wide breadth of industry sectors. Clients trust us to help them achieve feats that were once considered impossible, and we have often broken records in doing so.