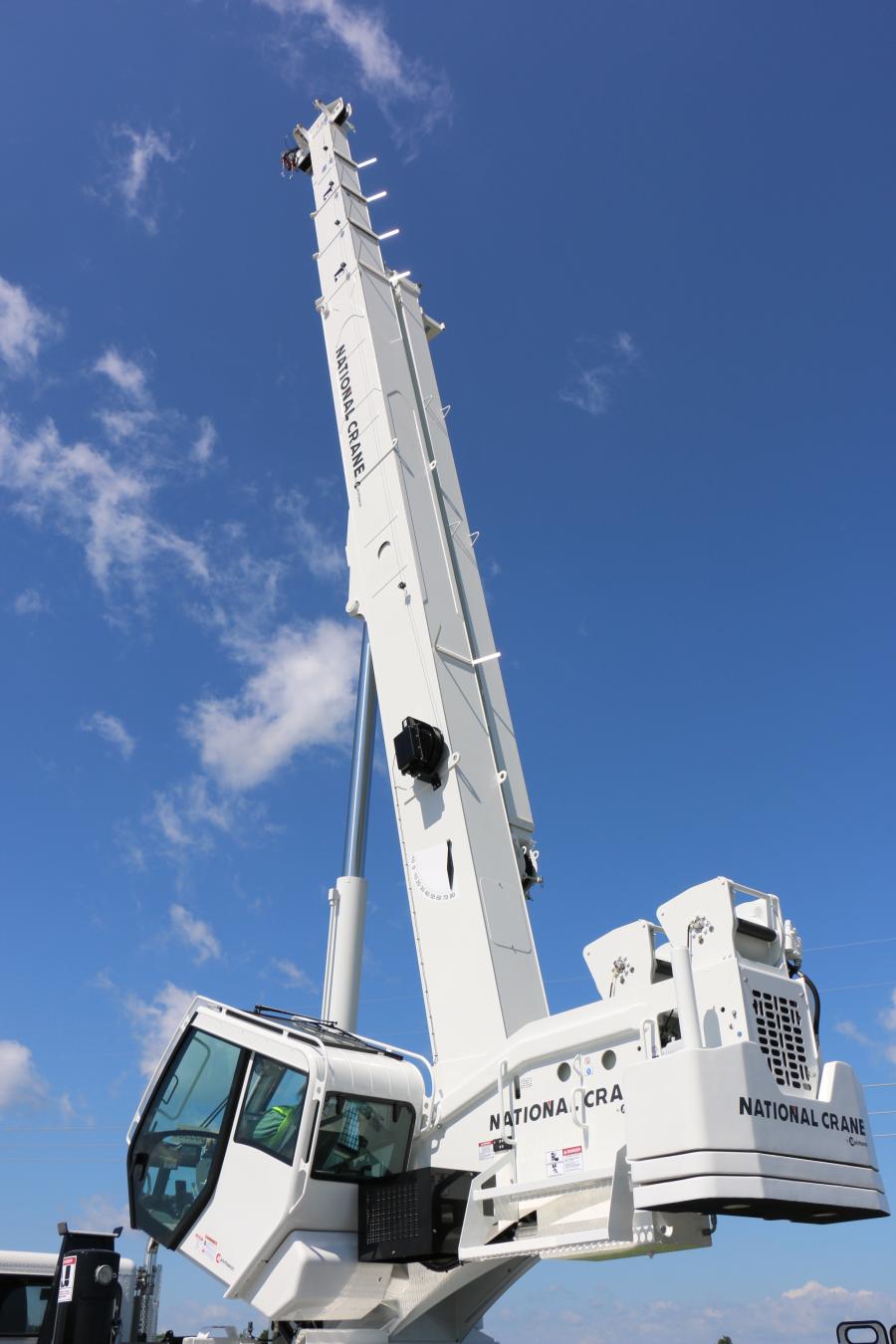 Present was Stephenson Equipment, the Harrisburg, Pa.-based dealer, who partnered with Manitowoc to design the crane.

A Product Is Born

“The NTC55 is an evolution of a product that was originally introduced by National in 2010, which was the NBT55, and I saw the need to include some enhancements on the NBT product that would make the crane much more versatile and fit in a typical truck crane application as opposed to just being a boom truck,” Stephenson's Crane Sales Manager Steve Tucci said.

According to Tucci, the primary difference between a boom truck and a typical truck crane is the outrigger stance.

“The outrigger stance on boom truck is typically 24 feet. In many cases, it doesn't fit into the typical 40 ton, 50-ton truck crane application, which is only usually a 20-foot outrigger span.”

Tucci was looking for a tilt cab for better visibility when people are working at elevation and for different counterweight splits to give the crane the ability to fit different travel applications, making it more versatile.

These concepts were taken to National Crane's lift solution group, who engineered the changes needed to create this new model crane.

“As the process evolved, our goal was to develop a product on four axles that would meet Pennsylvania highway regulations, which is extremely hard to do in this size class machine,” Tucci said. “Through that, we worked closely with Peterbilt to develop the truck to fit the application. Everything about the truck is to enhance its road-ability. The split counterweight is also with the design to enhance capability for road-ability. The previous model had a 76-degree boom angle. We requested this model have an 80-degree boom angle so you have the ability to reach higher elevation.

The all-new 55 ton (50 t) NTC55 is an evolved truck crane “replacement” that can maneuver into the tight working quarters typically reserved for a truck crane, but with the added features of a boom truck to increase versatility on the job site, according to the manufacturer.

The new model boasts a four-position outrigger system that gives the crane the reach and capacity of a 55-ton boom truck when fully extended. In tighter working quarters, such as those found in urban environments, the NTC55 can retract its outriggers to 75 percent span to take up less space while maintaining greater capacity than other truck cranes with similar footprints.

“It's a very compact package,” said Rich Nicols, owner of Bob's Crane Service. “It is a crane that I can get a lot of crane in a very little tight spot. A huge part of my business is residential tree work, where I will back into a driveway, set up and bring a tree from the back of the yard, the back corner, over the house and bring that tree out front. It's a very tight job area.

“Homeowners have an eight-foot driveway, so the crane has to be eight feet,” Nicols said. “It is always a really tight set up and so you have to negotiate lots of spots to figure out how to get it set up and then you still have to have a lot of crane, because tree work is inherently touchy. You need a lot of crane in a tight spot. This is 26 feet wide and very short. Through Peterbilt's magic it will turn very tightly. I can almost back in a driveway, not like a car, but similar to a car, where you don't have a lot of egress and entrance room.”

“What this crane does is fill a gap that we currently have, so we do not have to send the big truck cranes; we can send the small boom truck,” company President Larry Allison said. “It has the capacity. The strength of this new crane is really key to filling that hole.” A new hydraulically removable counterweight system, 80-degree max boom angle and a 20-degree tilting operators cab — a first for National Crane — further add to its operator-centric design.

The NTC55 takes boom trucks to the “next level,” according to Ned Eisenhart, president of Iron Stag Crane.

“It takes the so-called boom truck as we know it and takes it to the next level and really puts it in a truck crane level because of all the features, capacity and the road-ability,” he said. “It has a tilt cab and some features that larger machines will have that weren't in a boom truck. That's one feature of the many features that we like with the crane. And that was a big push for that crane, because our boom truck, our 45s, the outrigger stance was so wide and we were wanting something that had a smaller outrigger stance that could compete with 40-ton truck cranes. With this, we got that ability that we can bring in the outriggers that are a shorter width and still have a 40-ton capacity.”

The NTC55 also has extreme road-ability, according to Nichols.

“It has a very nice ride profile and it is very easy to get to a job, even if it is far away. This expands a lot of reach and it allows me to chase my customer who continues to be more mobile. As my customers go farther, I go farther,” he said

Nichols credits Stephenson Equipment for contributing to his business's success and said he'd been requesting a smaller truck.

“Stephenson has always been in my court,” he said. “They are really the reason that I am as successful as I am. They have been a tremendous partner in taking me forward. Now they are a tremendous partner of National and National has helped deliver a product that we both have been asking for. It took a little bit of doing, because you don't move those big companies that quickly, but they delivered a product that is exactly what I asked for.”

Allison, a fourth-generation Stephenson Equipment customer, spoke of a long-standing relationship and said, “they [Stephenson] have always been a great partner, and to me that's what sets them aside from others: their working relationship.”

“We have been in family business for many years back previous to Eisenhart Crane,” he said. “Back in the '60s, we bought cranes from Stephenson. I always had a good relationship with them and now that we started this business, we decided that they would be the company that we would we want to go into partnership with and be the ones to serve our crane needs.”—CEG