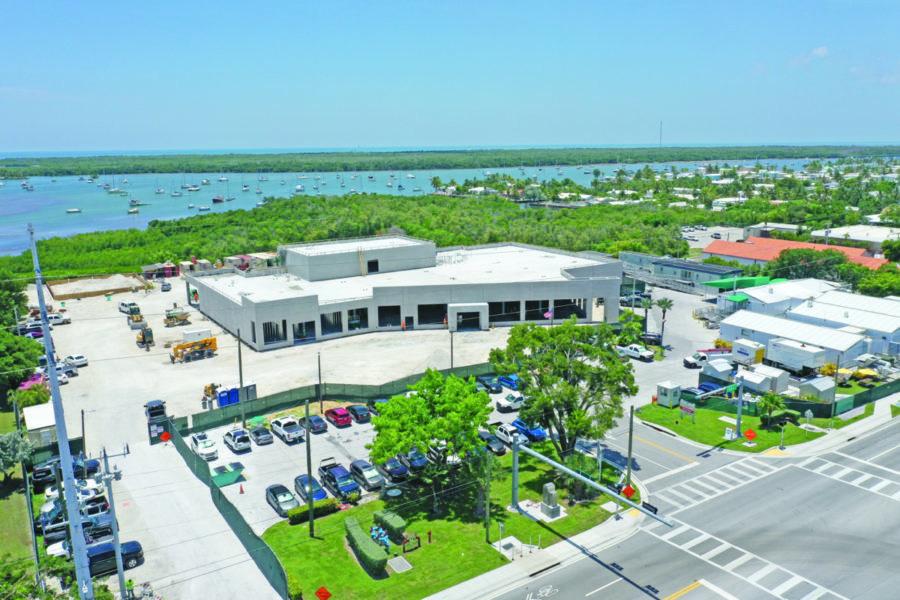 The local Fishermen’s Community Hospital (FCH), which is being completely rebuilt by Baptist Health South Florida, along with Marathon’s Hospital Foundation board. (Keys Weekly rendering)

In early September, Daniel Samess, CEO of the Greater Marathon Chamber of Commerce, penned an article in a local newspaper that his Florida Keys community "is experiencing a building boom most haven't seen here in decades."

His piece in Keys Weekly said that despite violent storms, COVID-19, dengue fever and murderous hornets, the islands of Marathon have been growing and improving since Hurricane Wilma roared through the area in 2005. In fact, he said that development in the middle Keys community has increased exponentially over just the past few years.

"There will always be debates on both sides (rightfully so) on our community's growth, but what is so impressive to me isn't just the growth, but the improvements," he wrote.

"Specifically, replacing old infrastructure with new and improved facilities that will better serve our businesses, community and visitors, while also hardening our buildings with newer construction that enhances our U.S. 1 corridor — truly creating a win-win for all of us."

He reported that the islands that make up Marathon have several construction projects under way or in the planning stages. Each of them, Samess said, "will have positive effects on multiple levels."

At the top of his list is the local Fishermen's Community Hospital (FCH), which is being completely rebuilt by Baptist Health South Florida, along with Marathon's Hospital Foundation board. The $40 million investment includes a $15 million donation from local philanthropic support via the Foundation.

"Baptist estimates the construction alone has created more than 500 jobs; and when our new hospital is fully open and operational, it will have created over 100 quality jobs," Samess explained.

Another project undergoing improvement is Marathon's Stanley Switlik Elementary School. The $32 million renovation to improve, enhance and harden the Switlik campus and facility is nearing completion, at which time it will provide new buildings situated well above flood stage, have Category 5 hurricane wind ratings, and have the latest mandated security measures to better protect students and staff.

Next to the school is the new Marathon branch of the Monroe County Public Library. Samess said the facility is a $7.2 million investment that puts contractors, subcontractors and other tradesmen to work in the community.

"Libraries can have a big impact on the economy," he continued. "A recent return on investment [ROI] study conducted by the Haas Center for Business Research and Economic Development at the University of West Florida reported that for every $1 Floridians invest into its public libraries, they receive $10.18 in economic return. This means the $7.2 million in public/county money invested into Marathon's new library will yield a ROI of about $73 million to Marathon and Middle Keys residents and students in economic value."

Marathon has seen a resurgence in resorts since the recession, Samess said, but more units also were recently approved by the city of Marathon. For instance, the long defunct Crystal Cove Resort is currently under construction and will soon feature a 46-room hotel. In addition, the town's Holiday Inn Express is transitioning to a Fairfield Inn & Suites and is adding 27 suites on the water side of the property.

"Build-out costs for just these three additions easily exceeds $20 million," Samess said in the Keys Weekly piece. "The additional visitors also equate to increased visitor spending within our community, benefiting both our local businesses, their staff, as well as our city and county that will derive revenue via sales and bed tax collections."

He also said, "last, and arguably most important, are the many workforce housing projects that have been approved by Marathon's City Council, a few of which are currently under construction.

One of those new buildings is in the center of town and will consist of 101 two-bedroom units. In addition, a local broker and developer has approvals for two more housing developments in the Coco Plum area, which will total 124 units, 15 of which will be reserved for essential personnel like firefighters and law enforcement personnel. These three housing projects, as well as similar nearby developments, have estimated construction costs totaling $60 million, and will add 286 new units for the local workforce.

"That's quite an accomplishment for our small community that has consistently always had a large workforce housing deficit," Samess wrote.

"Businesses will be able to hire from a bigger pool of applicants, and [workers] will be able to enjoy rent-stable housing that encourages them to stay in the area. Eventually some will move into market rate rentals or purchase homes. Ultimately, we need to reduce the transiency of our workforce and reduce the turnover that vastly affects our businesses and employers."