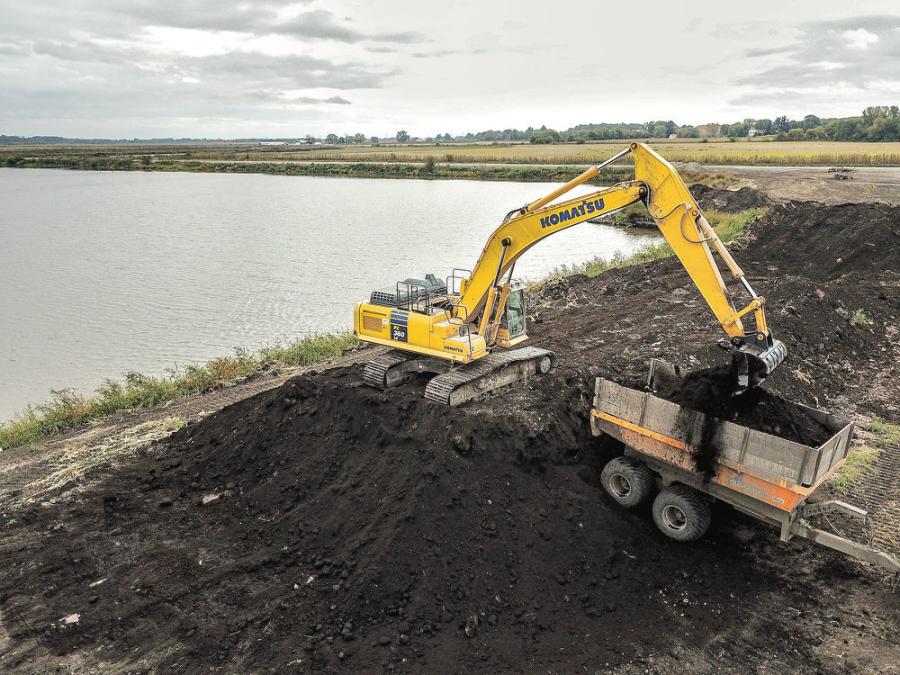 A Markman Peat operator uses a Komatsu PC360LC excavator to load peat moss that was harvested from the adjacent bog. “The PC360 has excellent power, which is great because we are usually pulling loads of wet dirt from the ground at full extension,” said President Jeff Widdop.

For 25 years, Jeff Widdop worked in commercial banking. During that time, he developed a diverse group of clients. One, however, piqued his interest for years: Rob Markman, President of Markman Peat Corp. in LeClaire, Iowa.

“I always used to tell Rob that if he was ready to get out of the business, I would happily take it over,” recalled Jeff. “It was always a serious offer. I thought the business was interesting and that there was opportunity there. It seemed a lot more fun than banking.”

Jeff's friend, Brian Sherrick, who worked in banking for 15 years, was also looking for something different, and Markman Peat fit the bill. The two formed a partnership and approached Rob with an offer in 2010. He accepted, and Jeff and Brian began their adventure on January 1, 2011.

“We both had a relationship with Rob. I was his banker for 20 years and Brian's dad was Rob's accountant for 30 years,” explained Jeff. “I liked my time in banking, but this is a lot more enjoyable. It was a challenge at first, just like we expected, but it's been rewarding. I like interacting with long-term customers and developing those relationships.”

Jeff also appreciates the more subtle differences between banking and his new venture, most notably the dress code. “Now, I only have to wear a suit and tie when I go to funerals and weddings! It's been a real lifestyle change.”

Today, Jeff and Brian are equal partners in the company that has 85 employees and four facilities across the Midwest.

The company harvests reed sedge peat moss from bogs created by abandoned riverbeds; mixes and grinds it with other soil amendments to create different variations of soil products; and then bags the goods at its facilities. It purchases and bags rock and sand as well. The company's New Plant Life and All-American products are available throughout the Upper Midwest at wholesale retailers ranging from big-box stores to independent shops.

It should come as no surprise that two people with extensive backgrounds in banking focused on numbers when they purchased the business, and that's exactly what Jeff and Brian have done. Since the duo acquired the firm seven years ago, the company has increased production by nearly 400 percent.

To accomplish that impressive gain, Jeff and Brian had to solve a chicken-or-the-egg scenario.

“We knew we wanted to ramp up production significantly in the first five years,” stated Jeff. “We had the material, we just needed customers to buy it, so we put an emphasis on acquiring sales. Once we did that, we had to make sure we could meet those sales. If a store doesn't have the material, they can't sell it. And, if you can't get it there in time for the weekend traffic in the spring, they are going to call someone else. Everything had to grow together.” 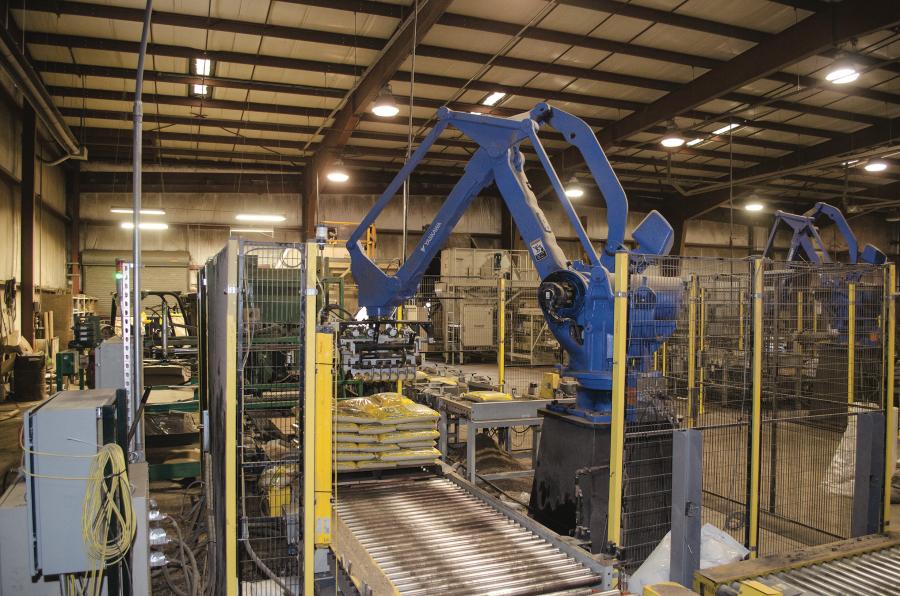 “When we took over, there was very little automation,” recalled Jeff. “Throughout the last five years, we have invested in the automated lines. At all of our facilities, we've really had a focus on efficiency — from equipment to management. It has paid off.”

A significant part of the company's overhaul included its equipment.

“When we came in, a lot of the older machines needed constant repairs,” recalled Jeff. “We looked to increase our productivity and also stabilize costs. Upgrading our material-handling fleet was the best way to do that.”

With this in mind, Markman Peat met with several equipment distributors to find a package that best suited the company. They found it with Komatsu excavators, dozers and wheel loaders from Road Machinery & Supplies Co.'s East Moline Branch and Territory Sales Manager Bryan Stolee.

“We knew we wanted new machines, on lease, with warranties,” explained Jeff. “Cost was our most important factor, but not necessarily purchase price. We dug into the efficiency of the equipment – longevity, repair costs and fuel economy. With everything in front of us, the package from Komatsu and RMS was the most attractive.”

Jeff worked with RMS and Stolee to develop a staggered, three-year cycle in which the company would lease and replace machines on a rotating basis. Markman Peat purchased extended warranties on its most-used equipment. It also takes advantage of Komatsu CARE, which provides complimentary service on equipment for the first three years or 2,000 hours, on its new Tier IV pieces.

“This arrangement works the best for us,” said Jeff. “The machines are new, they are under warranty and the price is fixed through leases. We have a clear picture of what our costs are going to be each month, and we know the machines will work every day.

“Service was another important part of our decision, and RMS has really delivered,” he added. “If we've had any issues, they've always been on top of it. RMS and Bryan (Stolee) have been great to work with.”

With its fleet-building strategy in place, automated lines in its warehouse and sales on the books, the only thing left to do was put the new Komatsu machines to work. They passed with flying colors. Markman Peat recently added a pair of WA320 wheel loaders, a D65 dozer and a PC360LC excavator.

“The wheel loaders are the most critical pieces of equipment for us,” detailed Jeff. “They dig the dirt out of the piles and load our bagging machines. If one of them goes down, we start losing money fast. Fortunately, the WA320s have been amazing. They run all day, every day, constantly hauling up to three yards of heavy soil in each load. We don't have a lot of space on our yard, so their tight handling and excellent vision from the cab are major benefits.”

The addition of the PC360LC excavator was a new twist for Markman Peat, which had previously hired out excavator work.

“The PC360 has excellent power, which is great because we are usually pulling loads of wet dirt from the ground at full extension,” explained Jeff. “RMS helped us customize a JRB bucket by drilling holes in it to let the excess water run out during excavation.” 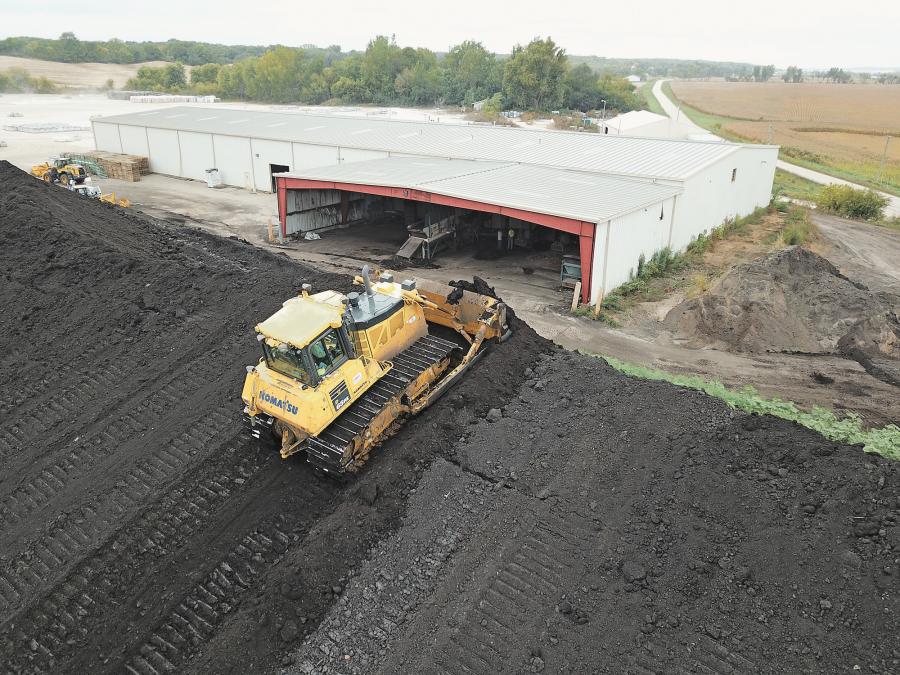 Markman Peat uses a D65PX dozer to keep its massive stockpile of material in order. One of its facilities currently sports a mountain of soil that stretches the length of a football field.

“The D65 has been great for us,” stated Jeff. “It has a comfortable ride and is easy to operate. It also has a good view from the cab, which is important for our operator, who is constantly climbing and shaping the stockpile.”

In addition to improved uptime and productivity, Jeff reports that the new fleet has saved the company nearly 20 percent on fuel costs compared to previous machines.

With a successful five-year plan in place, Jeff and Brian hope the growth trend continues during its next phase.

“We are continually looking for new opportunities,” stated Jeff. “However, our growth now will be more tied to acquisitions instead of efficiency and production. We have built a solid reputation through excellent service and a quality product. If we can continue to deliver on those, we should be able to continue expanding.”