Marona Construction Connects Present to the Past in Philly 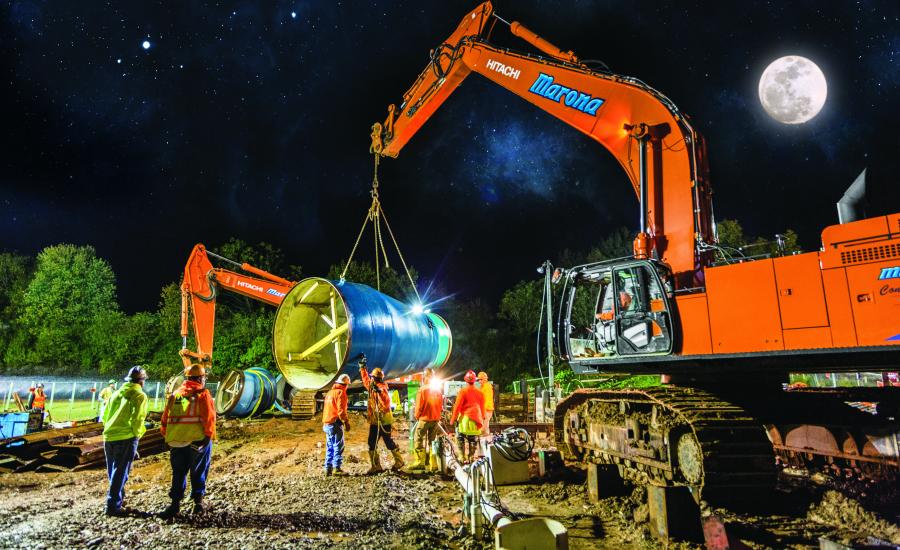 Bright white lights shine down on a large, 10-ft. diameter blue pipe that is attached with three chains to a ZX870LC-6. The excavator lifts the pipe up and places it into a 35-ft.-deep trench. It's 4 a.m. in Philadelphia, Pa., but for the Marona Construction Company crew, the workday is already halfway over.

Approximately 100 years ago, the city of Philadelphia placed a pipe in preparation of future city expansion. That day has arrived as the Marona Construction Company team works to connect new pipeline to the 100-year-old one.

For more than two years, Marona has been working with the Philadelphia Water Department to connect the Samuel S. Baxter Water Treatment Plant to new Clearwell Basins currently under construction. It's a gravity-fed system, so the pipeline connections are deep. By the time the project is complete in two years, there will be 4,400 ft. of pipe. 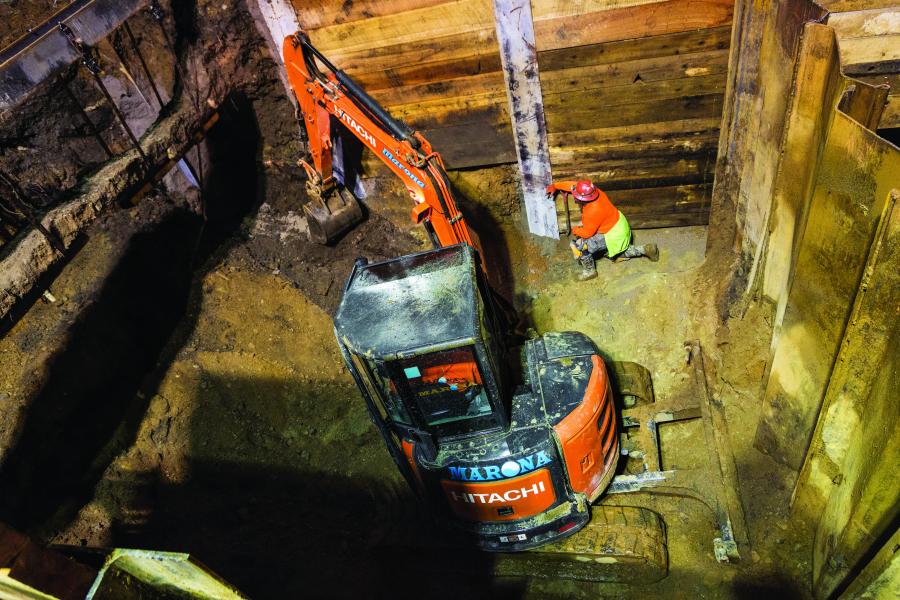 The work is something the Marona team is very familiar with. The company, which focuses solely on underground sewer interceptors and water transmission mains, handles public works projects throughout Pennsylvania, Maryland and Delaware.

"We do not do any other type of work. The owner, Ross Ludwick, has positioned us well to remain very competitive in this field," said Steve Saloma, vice president, Marona Construction Company. "I think the big thing that sets Marona apart from any competitor is our experience. We've been in business for 55 years, and we have focused on nothing else but underground public works sewer and water projects. This approach has led to our success."

"We treat our employees well," Ludwick said. "They work hard for us, and we work hard for them. We not only reimburse them well, but we also promote people that have been with us."

Site superintendent Michael Bain knows about this firsthand. He has been with Marona for more than 41 years and worked his way up to his current role.

"It's a good company to work for," Bain said. "I have certain guys that have been with us a long time that understand this type of work. Between myself, and my foreman, Mike Hall, we have experience with all types of pipe installation."

Bain and his 15-person crew are currently working a night shift for the Philadelphia Water Department's pipeline project to accommodate a nearby Police Academy's shooting range hours. Even with the unusual shift hours, there are no complaints from the dedicated crew.

"We can rely on them to do jobs of this size because they're highly experienced at it," Saloma said. "The crew needs to interact well together in order to do this type of challenging work. Each guy knows his role and does it well. They take pride in their work."

That focus on reliability extends to Marona's choice of excavators, which is an all-Hitachi fleet ranging from a ZX50U-5 up to a ZX870LC-6.

"The reason we continue with Hitachi is because of its proven track record of being reliable and being able to perform in the way we need on projects of this size," Saloma said. "My favorite thing about Hitachi excavators is the fact that I repeatedly say they are reliable. And for our type of business, any downtime costs money. So, with Hitachi machines being as efficient and reliable as they are, our company can depend on them to get the job done." 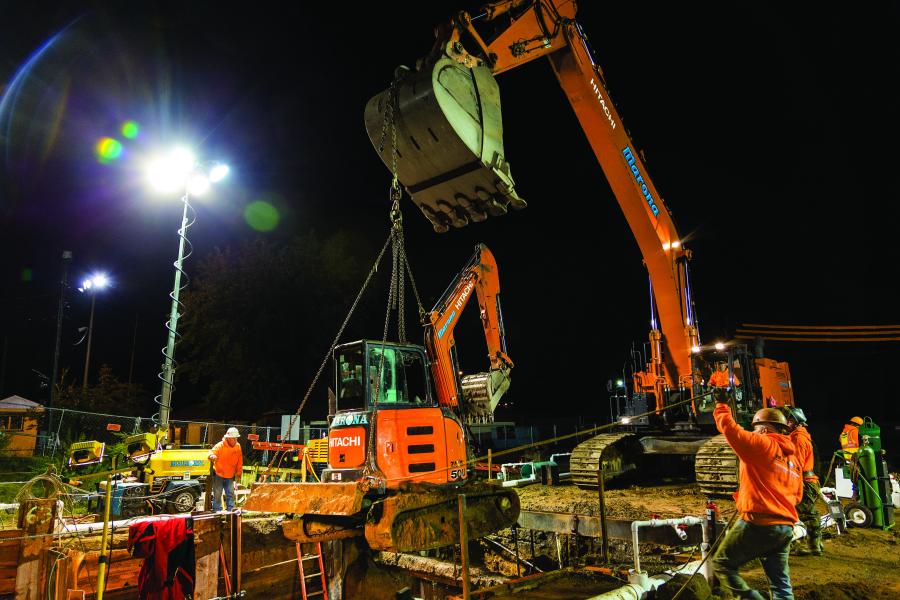 At the Philadelphia Water Department site, the ZX870LC-6 also lowers the ZX50U-5 compact excavator into the trench to dig further in the close quarters before lifting it back out and removing the remaining material.

"We needed that digging force and lifting capability," Ludwick said. "With Hitachi, we get both of those. The depth it can reach has been very helpful."

A 35-ft.-deep trench is no joke. Workers shore the trench to protect the employees entering it. The deep trench allows for a 10-ft. diameter steel water main to be installed in order to convey water along the new route. The Hitachi excavators dig a little deeper before another waler is placed and then the team continues to dig down to grade.

"Hitachi is the Cadillac of excavators," said Marona Construction operator Donald Schwartz. "If you don't get a Hitachi, you're not going to get it done fast."

That efficiency is especially important as this pipeline will ultimately provide more water to the city of Philadelphia.

"Efficiency means that we are able to meet our production rates on any type of pipeline project," Saloma said. "And with Hitachi, we're able to be efficient. Project owners have come to rely on Marona for successful results."

Dealer reliability is something that the Marona team also counts on.

"Elliott & Frantz's Drew Carr guided us through which machines to select for this project from the early planning stage, and obviously we're very happy with Hitachi," Saloma said. "Plus, Elliott & Frantz provides excellent service and that's why we chose them to be our dealer."