AUSA’s site dumpers are widely used in construction and other industries pretty much around the globe, but are rarely seen on American job sites. Chesapeake Specialty Equipment looks to change that.

Chesapeake Specialty Equipment was born of opportunity. The Jessup, Md., company was launched at the beginning of 2020 at the invitation of AUSA, the Barcelona, Spain, manufacturer of construction equipment. AUSA executives had sought to open a dealership in the mid-Atlantic region of the East Coast and persuaded John A. "Chip" McDonald to partner with them in doing so.

As owner of McDonald & Sons, a Jessup-headquartered golf course construction company, McDonald knew the machines. Seven years ago, he flew to Spain to acquaint himself with the AUSA culture and manufacturing process and ended up purchasing several site dumpers.

At that time, AUSA's presence in the American market was virtually nonexistent, the company having pulled out of the market after the economic collapse of 2008. Today, it is back in the United States with 22 dealerships — now including McDonald's Chesapeake Specialty Equipment. 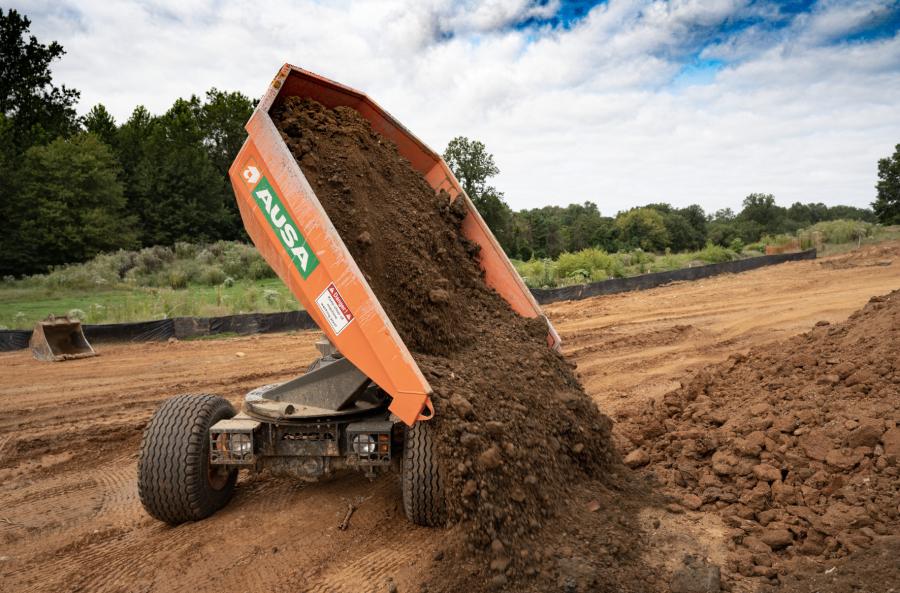 The dealership serves the District of Columbia and four states — Maryland, Delaware, Virginia and West Virginia. Its AUSA product line includes telehandlers, forklifts and the machines that on these shores remain something of an oddity, site dumpers.

The smallest dumper — the D100AHA — is a 1-ton 4WD machine just 39 in. wide that fits easily through doorways and moves via a hydrostatic transmission. Its front bucket tips forward for unloading. At the upper end is the D1001APG, an 11-ton dumper with a 5-cu.-yd. rotating bucket for side dumping, a 74-hp Deutz engine, and a 4WD articulated drivetrain that can climb 45-degree grades.

The site dumpers are widely used in construction and other industries pretty much around the globe, but are rarely seen on American job sites. The dealership's manager, Will Burgess, believes that will change as contractors become aware of their utility.

"I believe its popularity is going to grow," Burgess said. "When we sit around and talk about it, we harken back to the mini-excavator of 25 years ago. When it first tried to break into the market, guys would look at it and say, ‘What am I going to do with that little thing?' But it's so versatile and now everyone has one of the minis."

Burgess already has begun to collect stories of customers discovering the dumpers. Earlier on the day of the interview for this story, a contractor came into the dealership after he "got wind of the dumpers. He absolutely fell in love with them."

The contractor had won a bid to lay down a new pervious surface along a stretch of the pathway bordering the historic C&O Canal. He is required to keep the narrow pathway open to walkers and bikers as he works, which is to say high-visibility is a top priority. With the dumper bucket situated in front of the driver, keeping an eye on a passerby is made easier. The machine's compactness also gives him more maneuverability in the confined space.

More to the point, the contractor was enthused and rented two six-ton dumpers — a D601APG and a D601AP. The first has a rotating bucket, the second, a front-unloading bucket.

Inventory is a bit of a start-up problem for the AUSA dealership and growing demand for the machines is exacerbating the problem, not that Burgess is wishing for less popularity. AUSA's U.S. manager, Ignasi Moner, has 70 more machines on order for delivery the first quarter of the year as the manufacturer continues to gear up to meet a customer surge.

The relative dearth of products has impacted the dealership's rental strategy. Because used AUSA machines are hard to find, Burgess is resorting to renting new machines.

"We're starting to get into the rental business that way. It's not like we wanted, but we have to launch our rentals, because it is going to be a crucial gateway to sales. Many customers want to try a new brand by first renting it." 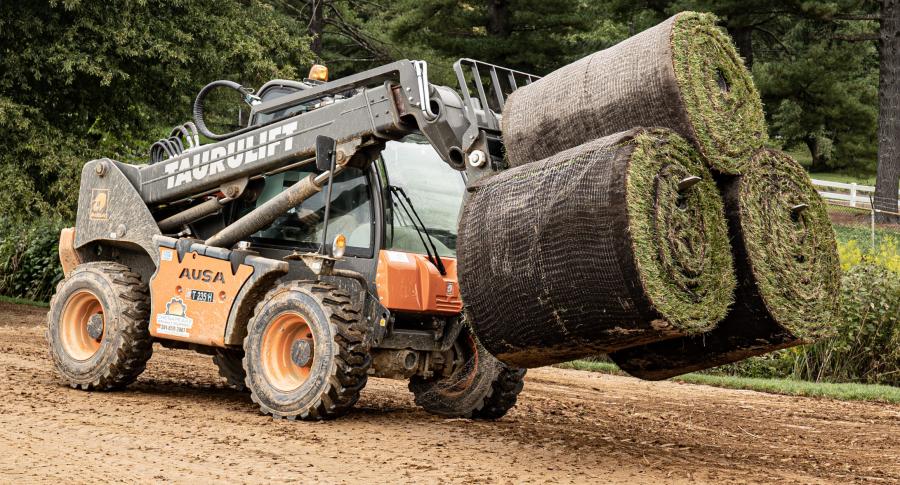 The most popular machine in the lineup so far is the T235H telehandler. The hydrostatic 4WD machine can lift 5,000 lbs. 14 ft. in the air and is steerable in front-wheel, all-wheel or crab modes. Powered by a 49-hp four-cylinder Kubota engine, the telehandler is frequently cited by operators for its visibility, particularly at the right rear corner where a boom base often blocks the view.

"The thing I hear the most about the T235 is not just how compact it is but how they have designed that compactness, producing great visibility all the way around," Burgess said. "It is used often in garden centers and nurseries where a lot of people are around. Operating the T235 is safer in such places."

Burgess is an engineer by training, including working with Lockheed Martin. He said he appreciates the engineering that has gone into the AUSA machinery.

"One of the big things that AUSA has done across its product line is integrate a superior control system. I commend AUSA engineers for it."

He's talking about the versatile AUSA joystick. "It really becomes evident in the forklift world where operators are used to a kind of lever system. In AUSA forklifts, you can perform all the mast functions, as well move your machine forward and reverse, simply by moving the joystick. You can move the joystick with on hand and keep the other one on the steering wheel. This is a great feature."

The manager also touts the "maintainability" of AUSA machinery. "The machines really tend to not be overly complex," he said. "We have six mechanics here with years of experience and they say the AUSA products are rock solid. On the golf course construction side of the house, they rave about how easy the machines are to keep going."

Another Chesapeake Specialty Equipment customer, Matt Hollis, utilizes the AUSA D350 site dumper in innovative ways. His company, Legacy Waters Environmental Services, removes sediment and invasive aquatic vegetation from lakes and ponds. His dumper is used to launch floating equipment including what he describes as "a skid steer on pontoons" and a dredging machine.

It also is employed to haul away tons of screened sediment, which is efficiently spread on adjacent properties. 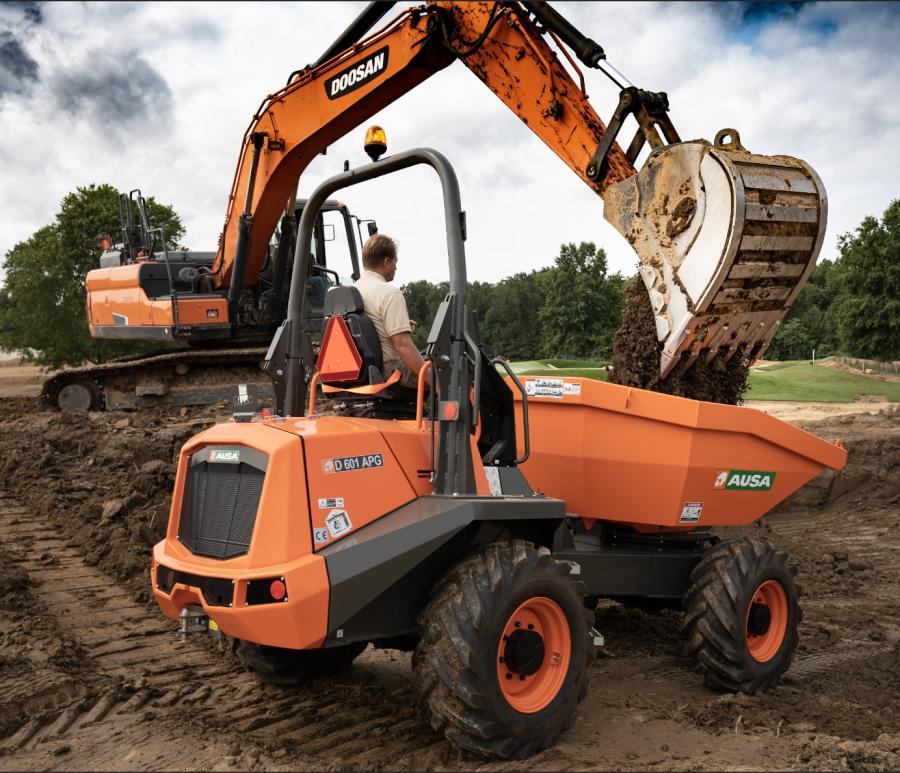 "It is pretty soupy, and with the rotating bucket on the dumper, I can drive along and sort of windrow the sediment so it can dry out. It has a quicker drying time that way."

On a project outside Lynchburg, Va., Hollis' company will be joined by another outfit that operates four of the AUSA dumpers.

"I can't speak to their longevity," Hollis said of the products, "but I love having all the controls on one joystick. You hire a young kid to help you and you can easily teach him how to operate the machine. There aren't a lot of bells and whistles, but, to me, the fewer the bells and whistles the better."

McDonald himself is kidded about his apparent aversion to extra features. According to Burgess, the company owner long resisted getting a dumper with a rotating bucket for side-delivery of material in his golf course construction work.

"He never wanted the rotating bucket, perhaps the only one on the planet who didn't like it. The U.S. manager jokingly refers to a fixed-tipper model as a ‘McDonald dumper.'"

The owner took the kidding and eventually did order a swivel bucket, subsequently finding it to his satisfaction. Burgess acknowledged that a fixed bucket has its merits: It is slightly larger than the rotating one and there are fewer moving parts to wear out.

As the reputation of the manufacturer's equipment spreads, new applications for the machinery are being found. Burgess suspects the biggest concentration of C400 and C351 forklifts are on the West Coast where "very, very large produce farms and orchards" are driving the lifts out into the fields to handle loaded boxes of harvested produce. The dumpers, meanwhile, are being discovered by cemetery service companies in their dirt-handling operations.

The dealership is housed in a 4,500-sq-ft. building on a seven-acre site in Jessup. The location is ideal for customer service as well as for building out an inventory of machines. Both issues are on Burgess' mind.

"The company stakes its reputation on standing behind its products. They will bend over backwards to ensure the satisfaction of a customer. We work hard to never miss a phone call or to get back promptly if we do. The owner, Chip McDonald, comes from a background of operating machinery and he knows when a machine is down the equipment owner is losing money."

As for getting more AUSA products and parts on the lot, Burgess is on it.

"We're building our inventory. We're trying to get our parts distribution up to where it needs to be. It's getting there. I get calls from way outside my territory, people looking for parts. We're getting a reputation as a dealership you can call and get the parts you need."

Serving four states and D.C. is a bit daunting, though, the manager acknowledged.

"I'll be honest, sometimes it's hard to know which direction to go, but at the same time, we are able to handle it at this stage because the AUSA brand is just beginning to be known. We're not yet being inundated and overwhelmed."

To spread the word, the dealership's executives hit trade shows earlier in the year, including the American Rental Association show, the World of Concrete and ConExpo. Then the pandemic set in and tactics had to change. New ways to market the machinery in the current environment are being tried and evaluated.

The number of dealerships across the country is growing as the U.S. manager pursues a dual strategy: incorporating the AUSA brand of specialty machinery into existing equipment dealerships or, as with Chesapeake Specialty Equipment, launching standalone franchises. CEG