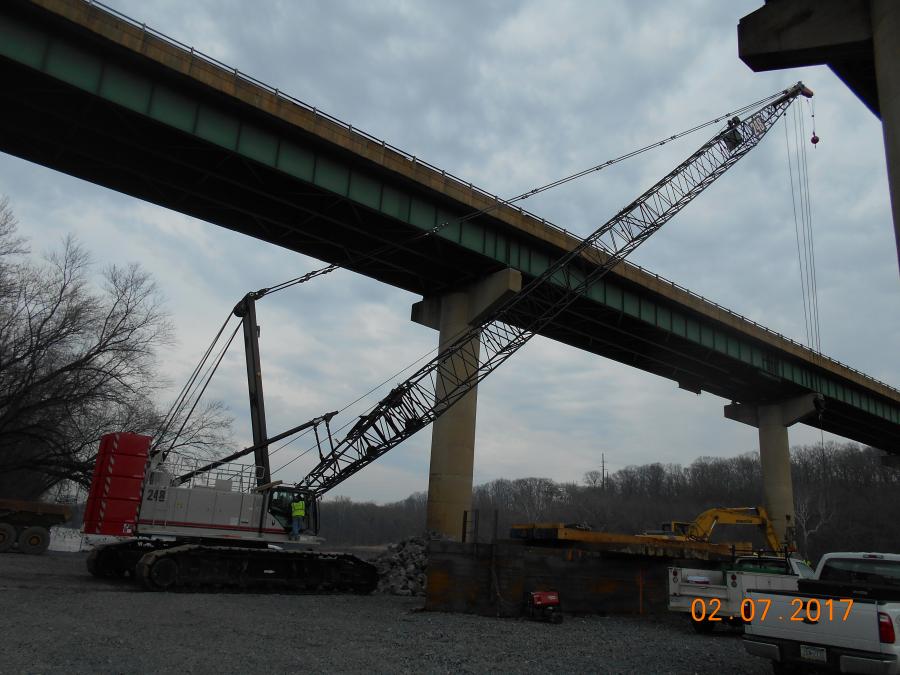 The Maryland State Highway Administration is in the early stages of widening I-81 (Maryland Veterans Memorial Highway) and rehabilitating several bridges in the Williamsport area of Washington County. The project is Phase I of a four-phase project.

SHA's contractor for the project is Triton Construction, Inc. of St. Albans, W.Va.

The contract calls for widening the road from four to six lanes, including the I-81 bridges over the Potomac River. Work began in the fall of 2016, and completion is planned for the summer of 2020.

Maryland Gov. Larry Hogan and Deputy Transportation Secretary James F. Ports Jr., announced the start of construction in December. The project is the first phase of improvements to enhance safety and relieve traffic congestion along the heavily-traveled corridor. The governor also announced Maryland's recent application for a federal FASTLANE construction grant to help fund the next phase of the project.

“I am pleased to announce that shovels are in the ground and work is underway to widen I-81 between U.S. 11 in West Virginia and MD 63 in Maryland,” said Hogan. “These improvements to I-81 are critical infrastructure investments that will help citizens here in Washington County, across western Maryland, and all across our state go about their daily lives in a faster, more efficient, and safer manner.”

SHA noted that I-81 is a critical link for West Virginia and western Maryland and serves a significant freight and commercial corridor.

Once complete in summer 2020, the 5-mi. (8 km) segment of I-81, including the bridges over the Potomac River and at Lappans Road, will have a total of six travel lanes. The project includes reconstructing the I-81 interchange with MD 63/MD 68 to accommodate the new lanes, installing storm water management systems and upgrading lighting, signs and guardrail to enhance safety along this corridor.

According to Charlie Gischlar, SHA's public information officer, much of the bridge work will be done under the bridge and behind a concrete barrier in the median. In addition, SHA is utilizing a floating access bridge so that traffic is not impacted on top of the bridge during construction.

Work will include widening 5 mi. of I-81 from U.S. 11 in West Virginia to north of the MD 63 (Greencastle Pike)/MD 68 (Lappans Road) interchange in Maryland. SHA also will replace the bridge decks and structural steel for the existing portion of the I-81 bridges over the Potomac River and MD 63/MD 68 to add a third travel lane plus full-width shoulders.

Phased construction will involve widening the bridges to the inside, then shifting the two lanes of traffic onto the new portion of the bridge while crews replace the existing structural steel and roadway surfaces.

The bridge structures are more than 1,136 ft. (346 m) long and provide clear roadway widths between barriers of 30 ft. (9 m). The bridges cross the C&O Canal National Historic Park, the Potomac River, and extend into West Virginia. This project is being coordinated with the National Park Service and West Virginia.

SHA noted that while the bridges are not currently structurally deficient, the roadway surface for each bridge is 47 years old. Since they carry heavy truck traffic, they are beginning to show signs of advancing deterioration with the need for patching.

“Considering the narrow width of the existing bridges, we studied how the bridge improvement operations could best be completed with minimal disruption to traffic,” the website stated. “After widening each bridge into the median to carry the current two lanes of traffic, we are able to complete the replacement of the existing bridge surface in a single phase. The end result will be bridges capable of carrying a future third lane widening with full width shoulders along I-81 for both directions through Maryland into West Virginia.”

According to SHA, these bridges are Maryland's responsibility for management and maintenance. West Virginia previously completed the widening of I-81 to three lanes in each direction, from Martinsburg to just north of the U.S. 11 interchange in West Virginia. In order to provide the third lane widening into Maryland, West Virginia requested Maryland to include continuous widening of I-81 into project from the current point north of their U.S. 11 Interchange to the Maryland State line. This additional widening will be included in the project with West Virginia reimbursing Maryland for the additional costs. The resulting project will provide for a third lane in each direction from north of the MD 63/68 interchange, southward to Martinsburg, W.Va.

SHA noted that, initially, all work will be done under the Potomac River bridge so there will not be a traffic impact. Once crews begin work on both bridge decks (riding surfaces) and the road widening, traffic will be shifted to maintain two permanent travel lanes in each direction throughout construction.

Widening to the inside will be constructed first in Stage 1. This widening consists of what will be the new lane and a new full shoulder. This section is wide enough for two lanes to be shifted onto the new portion of the bridges, while the existing bridge decks and steel are reconstructed in Stage 2.

“Working in the river is an initial challenge and the reason they are building the temporary platform to work from,” said Stephen Bucy, P.E., assistant district engineer of construction for the SHA, district 6. “Water levels that can change drastically will be a challenge throughout the life of the project. When they get up on top, the volumes of traffic on I-81 and very high percentage of truck traffic requires limited temporary lane closure timeframes [only at night] and is challenging.”

The SHA has worked closely with the National Park Service's C&O Canal staff to ensure that there is limited disturbance to the canal. A three-sided structure will be built to protect those on the towpath from any potential overhead hazards. During major operations (setting steel beams as an example), flaggers will be positioned on each side of the towpath to temporarily hold bicycle and pedestrian traffic until it is safe to cross.

“Coordinating with the National Park Service to keep the C&O Canal Towpath open and safe for users is a challenge, but one that is solved with good partnerships and pre-planning,” Bucy said. “We are building a protective structure over the towpath section under the bridge.”

At this early point in the project, the subcontractor list is limited, and includes C. William Hetzer, Hagerstown, Md., for paving and Redstone International, Uniontown, Pa., for drilling.