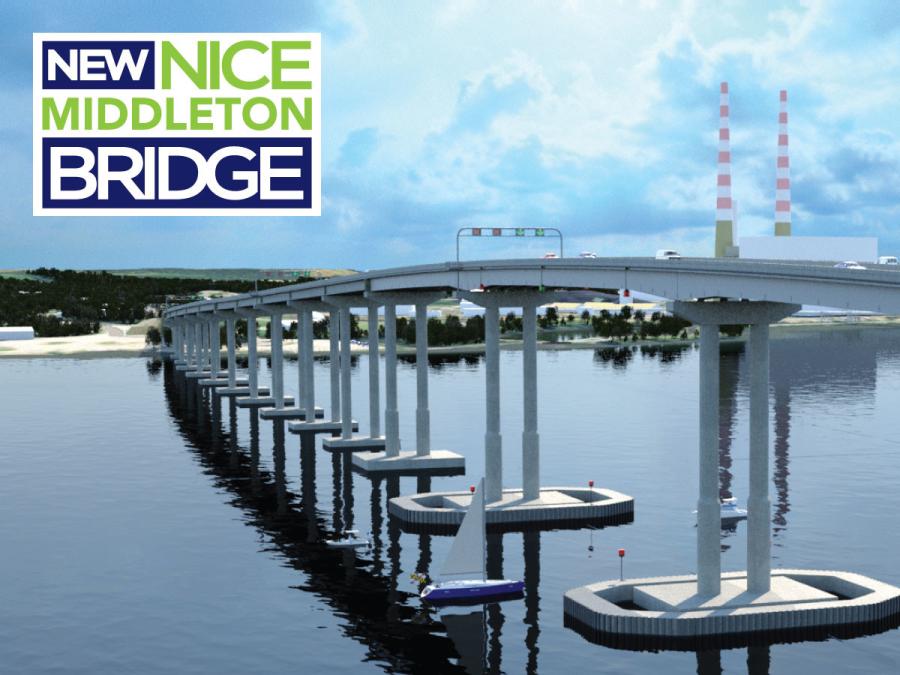 The U.S. Department of Transportation (USDOT) on March 15 approved a $200 million federal loan to finance part of the $636 million replacement of the Nice/Middleton Bridge, an 81-year-old span across the Potomac River between Newburg, in Charles County, Md., and King George County in Virginia.

The current 1.9-mi.-long structure, which links the two states via U.S. Highway 301, was named after Maryland Gov. Harry W. Nice, who served in the late 1930s; and State Sen. Thomas "Mac" Middleton, who left public service in 2019 after being in the Maryland Senate for 24 years, where he represented southern Charles County.

The Maryland Transportation Authority (MDTA) announced it was able to secure the loan through the federal Transportation Infrastructure Finance and Innovation Act (TIFIA) loan program to help finance a portion of the project.

"The Nice/Middleton Bridge project is a tremendous investment that benefits mobility safety and economic opportunity for the entire region," said Maryland Transportation Secretary and MDTA Chairman James F. Ports Jr. "It's a great example of how Maryland, working in collaboration with our federal partners, can leverage limited resources to improve infrastructure and grow jobs."

Ports' agency came to an agreement with the Skanska-Corman-McLean Joint Venture to design and build the new 1.7-mi.-long U.S. 301 bridge over the Potomac River in November 2019.

Construction began in earnest in July 2020, with the expectation that the new bridge will open in early 2023, according to MDTA.

The department also reports that the rebuilding project is 72 percent complete and is creating 500 jobs.

In addition to funding from Maryland and the federal government, Virginia is contributing $13 million to the project. The TIFIA loan repayment will be made exclusively from pledged toll revenues collected at MDTA facilities.

"Construction is well under way, and this TIFIA loan is just one more step toward making the New Nice/Middleton Bridge a reality," said MDTA Acting Executive Director William Pines.

The administration of Maryland Gov. Larry Hogan championed construction of a new wider and safer bridge to replace the old Nice/Middleton span, which opened to traffic in December 1940.

The construction joint venture is tasked with replacing the existing two-lane bridge with a new four-lane span aligned with the existing roadway approaches in Maryland and Virginia. The structure's 12-ft.-wide lanes with 2-ft. shoulders will double capacity and improve safety, MDTA noted, enhancing emergency response and maintenance/inspection activities.

The height of the new bridge will accommodate tall vessels passing underneath on the Potomac, and materials from the demolished older span will be used to create an artificial fish reef, the agency announced.

In addition, MDTA and Skanska-Corman-McLean are partnering with the Potomac River Fisheries Commission and Maryland Department of Natural Resources to fund oyster seeding in the lower Potomac River basin.

Maryland Matters reported that in December 2021 top MDTA officials told the agency's board of directors that the federal loan to build the replacement bridge was "stalled" and in "significant jeopardy." The board said the holdup appeared to be tied to safety concerns related to the state's decision not to build a dedicated bike and pedestrian path on the new span.

When Hogan first laid out plans to replace the bridge in 2016, he pledged there would be a separate shared lane for bicyclists and pedestrians. Those plans were later dropped in a cost-cutting move — over the objections of biking enthusiasts. MDTA officials note that they have since invested $2 million on signage to make cycling safe in the car lanes.

At December's briefing, MDTA's chief financial officer said that if the TIFIA loan did not come through, the agency would be forced to scramble for another source of funds.