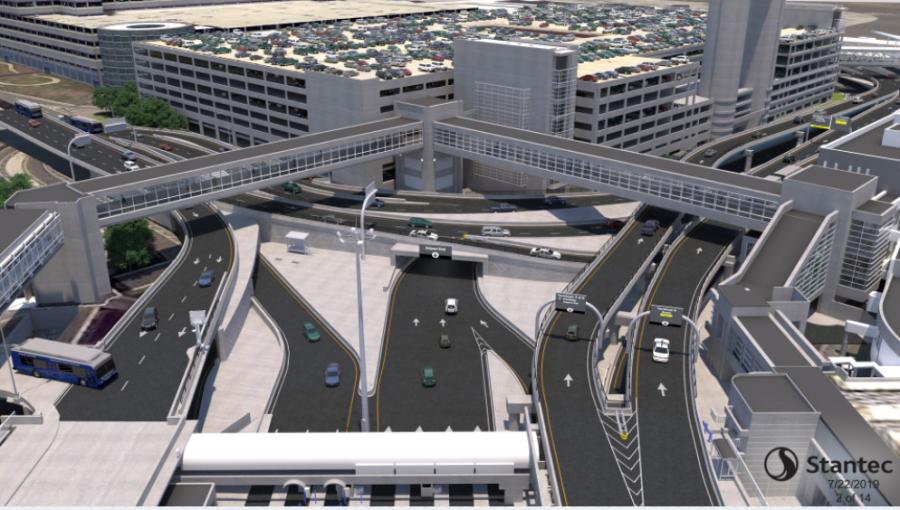 Massport’s Terminal B to C Roadways project will revamp the terminal area roadways to eliminate backups and get passengers to and from the terminals faster. New construction will replace aging roadway infrastructure along both levels between the terminals. (Stantec photo)

According to a report from the State House News Service (SHNS) in Boston, while a majority of the capital investment plan focuses on ongoing or completed projects, the new spending that Massport intends to carry out comes as passenger volumes for Boston's Logan International Airport and cargo passthrough at the Conley Container Terminal are trending upward compared to last year but remain below pre-pandemic levels.

Three-quarters of new spending over the next three years will head to aviation and repair projects, the SHNS noted, with $51 million slated for structural improvements to the upper roadway at Logan's Terminal B. At the Conley Container Terminal, the quasi-public agency plans to spend $5 million and use another $20 million in federal grants to create added container storage capacity.

Luciana Burdi, director of Massport's capital programs and environmental affairs, explained that Logan takes up a predominant portion of the capital investment plan with about $1 billion heading toward the bustling Boston airport.

Oftentimes, she told SHNS, capital investment plans distribute more money to the first year rather than the later ones. But this plan evenly distributes funding across all three years "which highlights the health of our financial organization."

The three airports Massport oversees — Logan Airport, Worcester Regional Airport and Hanscom Field in Bedford — are all in line for runway maintenance and improvements.

At Worcester Regional, a project to rehabilitate Runway 29 will cost $18 million while another $7 million will be used over the next three fiscal years to rehab Runway 5-23 at Hanscom. Safety improvements and maintenance for Logan Airport's 15R-33L runway are slated to cost $40 million.

"We have an extensive airfield program coming in these next three years," Burdi told the news service. "All these three projects are really happening in the spring and summer of 2023."

In addition, the investment plan calls for $16 million to buy eight enhanced electric buses for use on the MBTA's Silver Line. Burdi said the buses will produce zero emissions while running on the Logan Airport campus.

"We're working with the MBTA to make sure that those buses meet the technical requirements in terms of racks for luggage and facilitate the experience that we're looking for our passengers," Burdi said.