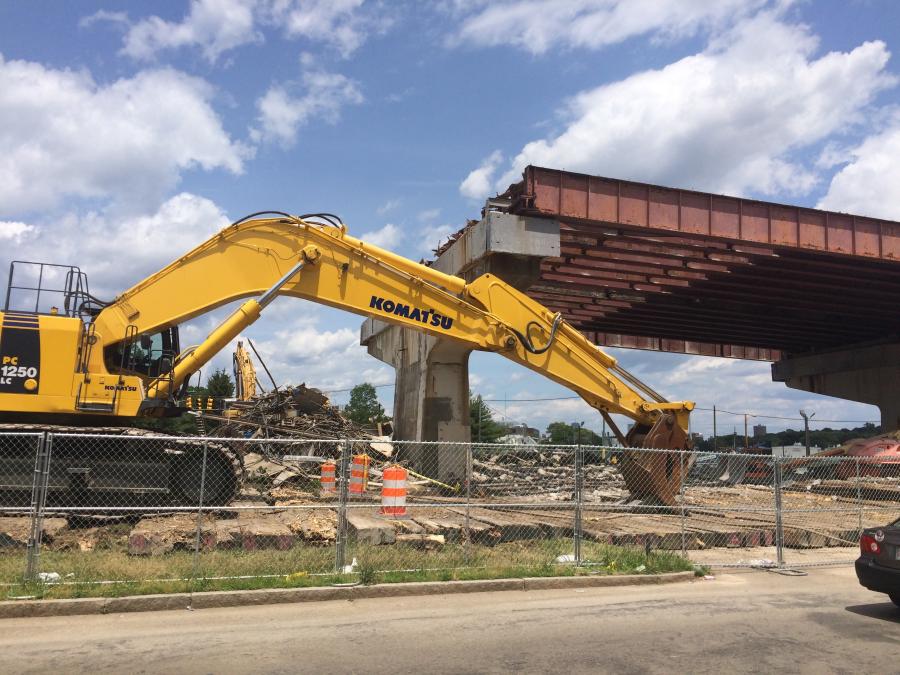 Barletta Heavy Division photo. The $67 million Casey Overpass project replaces the Monsignor William J. Casey overpass in Boston, and is scheduled to be complete in the summer of 2018.

The $67 million Casey Overpass project replaces the Monsignor William J. Casey overpass in Boston, and is scheduled to be complete in the summer of 2018. The project also includes upgrades and new infrastructure for commuter rail service. Barletta Heavy Division Inc. (BHD) is working with the Massachusetts Department of Transportation (MassDOT), the Massachusetts Bay Transportation Authority (MBTA), the city of Boston and the Department of Conservation and Recreation (DCR).

The work began in December 2014 and is being funded by ABP NFA. The Casey overpass was built in the 1950s — the elevated section of Route 203 carried the Arborway over Washington and South street in the Jamaica Plain neighborhood of Boston. It was located directly north of the Forest Hills Station. On a typical weekday in 2010, the overpass carried approximately 24,000 cars and trucks while the new Washington Street surface road carried approximately 12,000 vehicles per day. These roadway volumes are projected to grow by 5 to 12 percent over the next 25 years and the new roadways are designed with sufficient capacity to accommodate these future volumes.

“The area around the overpass serves many neighborhoods and traveling consistencies including pedestrians, cyclists, MBTA riders and motorists,” stated the web page for the project. “[It] also acts as an important gateway to such Boston institutions as Franklin Park, Forest Hills Cemetery, Shattuck Hospital and the Arnold Arboretum. In 2010, the overpass was determined to be structurally deficient, suffering from numerous superstructure and substructure problems due to a combination of deterioration and original design flaws and beyond the point of effective repair.”

This project, being constructed as an accelerated bridge program, has already involved the removal of the structurally deficient 1,650 ft. (503 m) Casey overpass, replacing it with a simplified, at-grade roadway network that will be fully opened to traffic in 2018.

Construction also includes a new headhouse, which will be ADA compliant for the MBTA Orange Line and will replace the existing substandard exit-only headhouse. Bicycle and pedestrian accommodations will be enhanced throughout the project limits. The Route 39 bus will be relocated to the reconstructed upper busway at Forest Hills Station. The project will result in the reconnection of the Arborway and Emerald Necklace Park from the Arnold Arboretum to Franklin Park.

“We are pleased with how the project is progressing,” said MassDOT spokeswoman Jacquelyn Goddard. “After a public process regarding the design of the streetscape and the configuration of the new roads and intersections which are impacted, a traffic management plan was developed. The plan is a mix of permanent and temporary routes that are safe for people in vehicles, on bikes and on foot and which allow construction crews to do necessary work as part of the project.”

BHD crews have been busy. February saw them and subcontractors continue the drainage installation work throughout the area formerly occupied by the overpass and at Shea Circle and utility work is taking place on the Verizon cables adjacent to Orchard Hill Road, as well as relocation of natural gas lines in the vicinity of the South Street/Arborway Road intersection and relocation of MWRA water lines west of South Street in the area formerly occupied by the Casey overpass. Feeney Brothers performed gas line relocation and tie-in at the intersection of Washington Street/South Street and work in the eastern portion of the Arborway focused on installing traffic signal conduits, as well as installing lighting conduits and bases. The center portion of the Arborway had work on the MWRA water lines undertaken.

“As in any large city,” said Huie, “there are multiple underground utility lines of various ages running through the work area. Barletta has worked closely with utility companies to coordinate the scope of work, and the relocation of utilities is ongoing.”

Along the future alignment of the Arborway between Shea Circle and Washington Street, the project will install drainage structures, traffic signal conduit, and conduit and bases for street lighting. Drainage structures are being installed in the area formerly occupied by the overpass in the area west of South Street.

“The overpass was removed utilizing three Cat 345's and a Komatsu 1250,” said Huie. “The machines were equipped with hammers, grapples and shears to dismantle and remove the individual bridge segments. There were 20 spans in the overpass, and each span took an average of three days to dismantle and remove. The entire demolition procedure took just under three months. Because the overpass crossed extremely active roadways, busways, railroad tracks and bicycle and pedestrian corridors, work in those sections were completed at night when traffic was minimal.

“A major necessary project element was the design and implementation of a comprehensive traffic management plan,” he added. “Traffic controls and detours were designed so that the flow of traffic was not unnecessarily impeded during this operation.”

“Especially on a project where there are multiple large pieces of equipment working in close proximity to crews on the ground,” he said, “everyone must be fully aware of the schedules, objectives and procedures of the other. This is why the development of our job and task hazard analyses and shift briefings are so vital. There are many ways to measure the success of a project's progress; on any given day how many yards of concrete were poured, how many feet of trench were dug, how much steel or precast was erected, but the primary measurement that we use is, 'did everyone go home to their families tonight?'”

The overpass demolition and other prep work for the project will see BHD remove a fair amount of concrete, steel and rebar, asphalt and earth — the numbers are still being tabulated, as are amounts of construction materials to be brought in as the amount of materials to be recycled is still being determined.

The closest BHD yard/shop is one mile away and for this project, there is one onsite mechanic.

“This winter has been a lot easier on us, so productivity has been better,” said Dallas Babineau, BHD's equipment superintendent. “The equipment has continued to work on a daily basis and that's been a key in making sure performance stays where it should be. It's when the equipment tends to sit for stretches of time that we see problems arise. We also have our own fuel truck and self-perform all onsite fueling of equipment to ensure we maintain an efficient, clean, and reliable refueling operation.

”By doing a lot of routine maintenance before the start of the day, equipment problems can be avoided,” he said

“Our mechanics start very early in the day to do oil changes, cutting edge flips/replacements, small repairs before the operator starts his day,” said Babineau. “That way we ensure that there is no interruption for productivity with any of the machines. We also sometimes work on Saturdays to do more time consuming jobs if the job site is not working.

“The mechanics and myself work together in communicating on all schedules, parts to be ordered, length in time of repairs, and other areas of maintenance to ensure a smooth flow of keeping up with maintaining the equipment while not interrupting the flow of work at each job,” he adds. “To do this as a group we are in constant communication to keep up. This includes constant phone calls and email chains that include mechanics, superintendents, equipment vendors, and anyone related to repair/maintenance of equipment.”

If you would like to have your story featured in Construction Equipment Guide, please contact our Editor-in-Chief, Craig Mongeau, at cmongeau@cegltd.com.