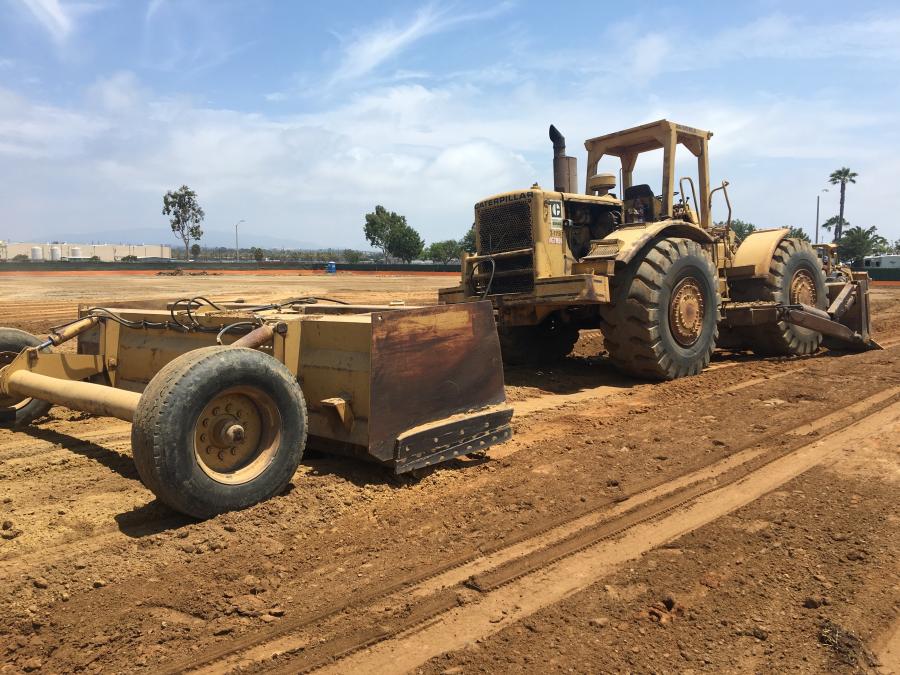 Construction on public infrastructure improvements associated with the hotel project could get under way as soon as 2019, which includes additional site preparation and building access roads. (Port of San Diego photo)

Crews are building a $1 billion resort hotel, convention center on 36 acres within the city of Chula Vista, Calif., and the Port of San Diego. However, a separate, but related, project to bring in a massive amount of dirt precedes the actual nuts and bolts work by about a year.

Well ahead of actual construction, which isn't expected until 2019, officials with the city of Chula Vista and Port of San Diego signed a letter of intent with RIDA Development Corporation to build a billion-dollar resort hotel and convention center.

Port of San Diego Commissioner Ann Moore reported that an agreement was reached with the Texas-based company to build the hotel on the city's bayfront.

Moore said RIDA would finance most of the hotel, with the city and Port contributing about a quarter of the costs by using money generated by the hotel.

The Port of San Diego serves the people of California as a specially created district, balancing multiple uses on 34 mi. along San Diego Bay. The stretch of land spans five cities. 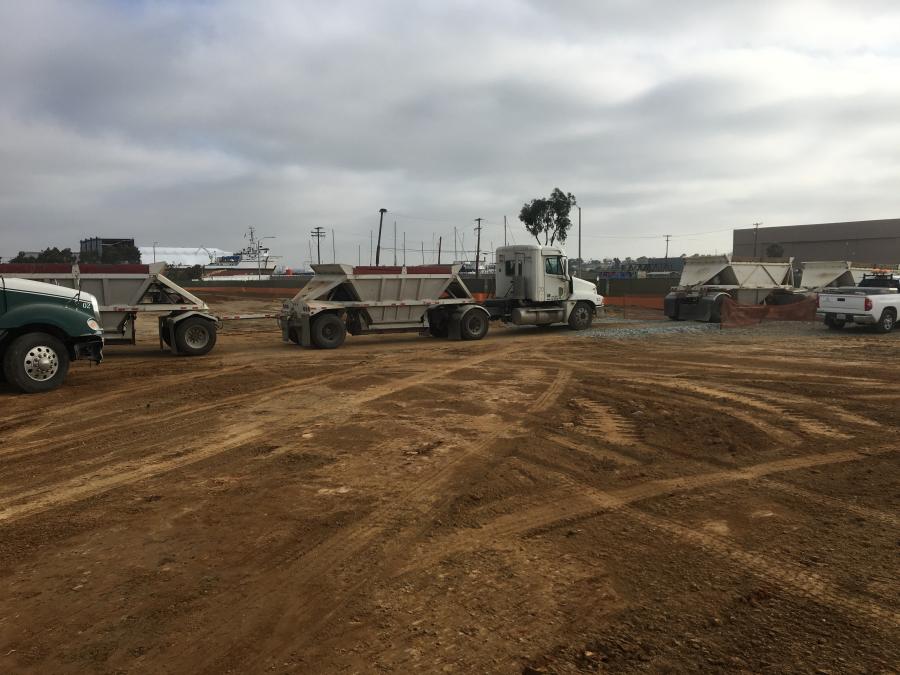 Although it collects no tax dollars, the port manages adverse portfolio to generate revenues that support vital public services and amenities.

The hotel and convention center project is expected to include more than 1,000 hotel rooms, more than 275,000 sq. ft. of convention space and swimming pools and a lazy river.

RIDA is building the project, but Gaylord Hotels will operate the resort once it opens.

Gaylord was negotiating with the Port of San Diego and city roughly a decade ago to build the resort when the project failed to materialize.

In 2007, Gaylord and local labor unions could not reach an agreement on a similar project in the same location.

Gaylord eventually pulled out, but Chula Vista and the Port tried again in 2010, and the Chula Vista Bayfront Master Plan was later approved. As part of the Master Plan, the South Bay Power Plant was imploded.

Port officials said the hotel is expected to generate about $390 million annually for the local economy once it opens.

The convention center and hotel will sit on a portion of the more than 535 acres of industrial bayfront being redeveloped in Chula Vista.

It's a Dirty Job

The hotel is just one element of a master plan that was first discussed in 2002 and approved by the California Coastal Commission in 2012. 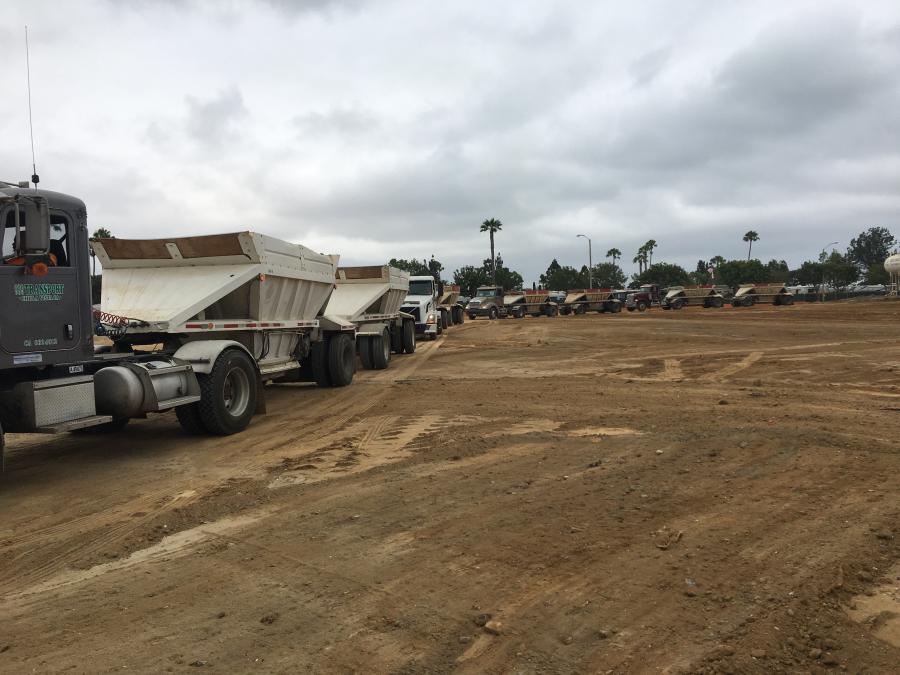 The project will be implemented jointly by the Port of San Diego and the city of Chula Vista in four major phases over a 24-year period.

Approximately 400 dump trucks left UC San Diego and drove south on I-5 into Chula Vista every day, six days a week, through August.

The dirt is from the campus of UC San Diego where university officials are building a new facility. UCSD is building the North Torrey Pines Living and Learning Neighborhood project.

Soil is being provided at no cost to the developer.

The soil and grading contractor is Sierra Pacific West of Encinitas, Calif.

"This is great, not only for the city of Chula Vista, which is huge, but also for the region at large and for the many, many visitors that'll be coming to the San Diego region," McIntire said.

"We are getting the future site of the resort hotel and convention center ready for construction, but before we can do that can happen, we need to elevate the site by six to eight feet," said Marguerite Elicoine, marketing and public relations representative for marketing and communications at Port of San Diego. The project requires import of 270,000 cubic yards of dirt from UC San Diego, she said.

"It's very exciting," said Mark McIntire the Port of San Diego project manager in a published report. "It's a five-year project so that excitement goes in pretty extended ways."

The convention center and hotel will sit on 36 acres of the more than 535 acres of industrial bayfront that are being redeveloped.

Two Projects in One

Elicoine noted that the two projects, building up the land by importing soil, and the construction of the hotel and convention center are two separate, but related, projects. 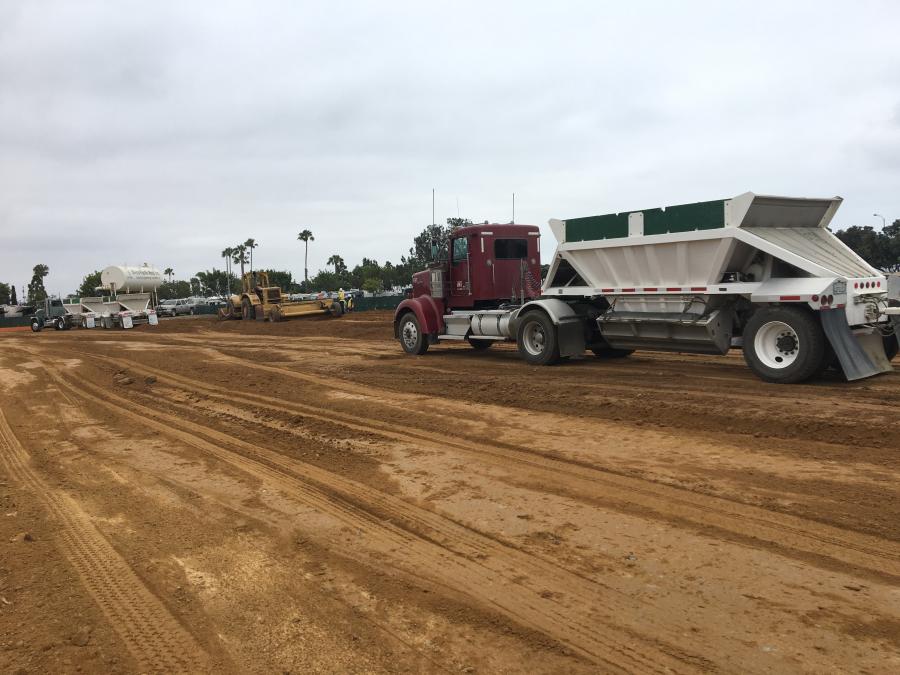 The projects will be implemented jointly by the Port of San Diego and the city of Chula Vista in four major phases over a 24-year period.

The port fired up the dump trucks and began the process again. The break in trucking soil was necessary because Port of San Diego was working on the soil removal schedule of UCSD construction project.

And the UCSD project was moving a little slower.

"We also changed the truck route to minimize traffic impacts," Elicone said. "The schedule change had very little impact on the project's schedule."

The site of the work is at the intersection of Sandpiper Way and Bayside Parkway.

Besides building up the site to accommodate future sea level rise, the higher elevation also helps improve drainage at the location.

Trucks will be transporting the soil to the bayfront between 7 a.m. and 4:30 p.m. Monday through Saturday during two time periods. The first time period was scheduled to wrap up on Aug. 11.

The second time period was scheduled to begin on Aug. 20 and continue through late October 2018.

Trucks will be entering and exiting Interstate 5 via H Street.

The work primarily involves the removal of the concrete foundation slabs and asphalt concrete pavement areas. Demolition began on June 4 of this year and was completed by mid-August.

After demolition, grading activities will continue into the fall. Equipment and trucks enter the bayfront from southbound Interstate 5 via J Street to Marina Parkway and exit to bayfront via Marina Parkway to H Street.

The Chula Vista Bayfront resort hotel and convention center will be constructed between H and G Streets west of Marina Parkway.

The hotel facility will be developed by RIDA Chula Vista, LLC and operated by Gaylord Hotels, the large convention hotel brand of Marriott International. It will include approximately 1,600 hotel rooms, 275,000 sq. ft. of convention and meeting space and associated retail and resort-level amenities such as restaurant, bar, lounge, recreational facilities, a spa, a pool with a lazy river and bike and boat rentals.

Construction on public infrastructure improvements associated with the hotel project could get under way as soon as 2019, which includes additional site preparation, building access roads and new public streets (portions of E, G and H Streets), providing utility services and building the new Harbor Park. A contractor will be hired when this phase is ready to begin.

The resort hotel and convention center together are the centerpiece and catalyst project of the Chula Vista Bayfront Master Plan, a decade-long joint planning effort by the Port, the City of Chula Vista and a broad coalition of stakeholders.

The CVBMP was collaboratively planned through extensive public outreach that included more than 100 community meetings and resulted in a comprehensive Environmental Impact Report and Port Master Plan Amendment, which was approved by the Board of Port Commissioners in May 2010 and certified by the California Coastal Commission in August 2012.

Backed by the work of RIDA Chula Vista, Gaylord Hotels will operate the hotel and convention center.

It's not the first time RIDA and a Marriott brand worked together. RIDA of Houston began work on an $800 million project to build a two-million-sq.–ft. Gaylord Rockies Hotel and Convention Center on Jan. 13, 2016.

The Gaylord Hotels chain is part of the Marriott International Int. portfolio of brands.

The project is expected to have a $1.3 billion regional economic impact and generate 2,300 direct and indirect jobs during construction. After completion, it is projected that the convention center complex will create 7,800 permanent jobs and inject $475 million annually into the regional economy.

Other elements of the master plan include an RV park, 70 acres of new parks, 120 acres of open space and wetlands, a shoreline promenade with retail space and restaurants and a parking garage offering up to 3,000 parking spaces.