Other elements include the addition of new merge lanes between interchanges, new lighting and signs, new landscaping, wider freeway bridges and realigned on- and off-ramps. 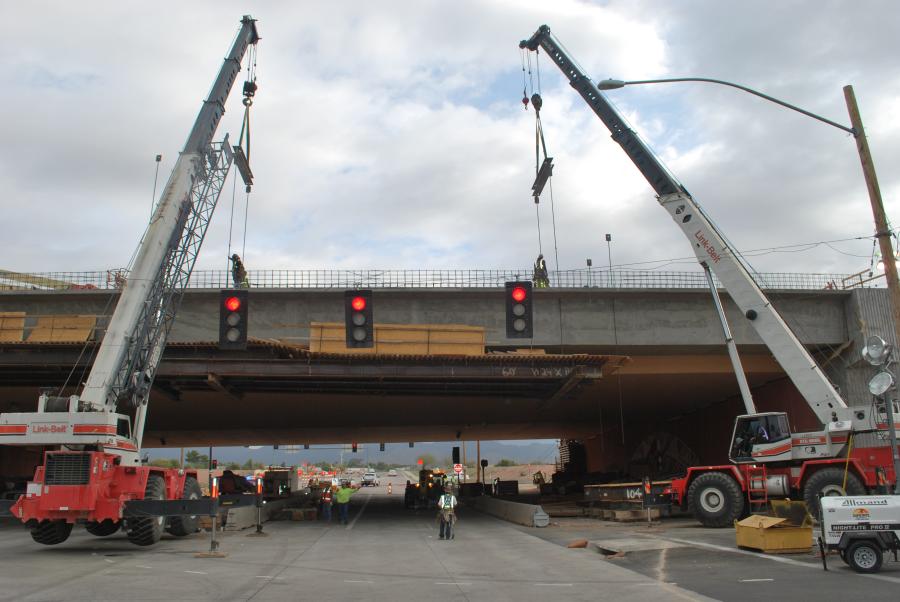 Crews from Pulice Construction Inc. are expected to complete the 2.5-year Arizona Department of Transportation (ADOT) project on the Salt River Pima-Maricopa Indian Community, near Scottsdale, Ariz., in the fall of 2016.

Work on the $74 million project includes widening 11 mi. (17.7 km) of Loop 101 between Shea Boulevard and Loop 202 (Red Mountain), with the addition of one new lane in each direction. A second new northbound Loop 101 lane also will be constructed between the Loop 202 interchange and McDowell Road.

Other elements include the addition of new merge lanes between interchanges, new lighting and signs, new landscaping, wider freeway bridges and realigned on- and off-ramps and a new layer of rubberized asphalt.

“Whether it's holding off on major closures for weeks at a time because of big sporting events or getting work done while also keeping traffic moving,” said Doug Nintzel, ADOT spokesman., “the widening project has been a true balancing act for ADOT and its prime contractor, Pulice Construction.”

“The job is part of the Maricopa Association of Governments' 20-year Regional Transportation Plan approved by Phoenix-area voters in 2004,” said Nintzel. “Widening the freeway, which often carries well more than 125,000 vehicles per day, is a freeway-improvement priority in the Valley of the Sun.”

The ADOT-Pulice team has been required to make way for events such as the Super Bowl, spring training baseball and the Waste Management Phoenix Open golf tournament. Dan Haskins, ADOT's senior resident engineer said keeping the job on schedule has been a successful lesson in coordination.

“The contractor's team and our owner's team are in constant communication, from top to bottom,” he said. “It enables us to verify that the work is being completed in a timely manner and in accordance with the contract's stipulations. It's impossible for everything to be perfect. But we've definitely worked to protect both parties from misunderstandings as we move toward finishing the job next year.”

The project team has been able to maintain the same number of lanes within the work zones, including an HOV lane in each direction, while also shifting the lanes slightly to allow for the placement of temporary barrier wall. Key challenges have included the widening of existing bridges over major cross streets, as well as the reconstruction of on- and off-ramps to fit the freeway's wider configuration. That has meant balancing ramp closures so drivers will find an open ramp at the next available interchange.

“We're doing a good job with the partnering process and that's a big part of keeping the work ahead of schedule,” said Haskins. “Each week we have at least one formal meeting to discuss outstanding issue while also documenting any actions that need to take place. It has certainly limited surprises.”

Loop 101 in the project area was originally constructed as a six-lane freeway through a series of projects in the 1990s. HOV lanes were added last decade. The current widening project has waited on the availability of regional transportation funding.

“It comes down to building freeway improvements in stages, when the funding is available,” said Nintzel. “In Maricopa County, that funding comes from the voter-approved, 20-year extension of a local half-cent sales tax (2006-2026). Revenue is programmed for freeway projects identified in the Maricopa Association of Government's Regional Transportation Plan, a long-term blueprint for transportation improvements across the Valley.”

ADOT said the project will provide “a quieter and smoother driving experience due to the use of rubberized asphalt on the widened roadway surface.” This includes the roadway surface from Shea Boulevard to McKellips Road. As of January 1, 70 percent of the work has been completed.

“That meant that precast girders weren't an available option for the lane additions,” said David Locher, ADOT transportation engineering specialist. “Crews had to build the components at the project location, which required falsework. That falsework, which is what crews constructed the additional Loop 101 lane on top of, hung lower than the final height of the bridge and had to be built high enough to give adequate clearance to the traffic traveling below on 90th Street. This meant that the crews had to build the new bridge a few feet above its eventual resting spot and when the bridge construction was finished, they had to lower it into place.”

The lowering was accomplished with the help of four jacks — Enerpac 250-ton (226.8 t) cylinder.

“They had to be strong,” said Locher. “We just lifted the lane ever so slightly so that we could remove some of the timbers (part of the falsework) at a time. The bridge was lowered in three-inch increments until it was in place about 13 hours later. The southbound side was actually high enough to clear traffic because it is built on a banked curve. The slight incline gave crews the space they needed to build the additional southbound bridge without having to elevate the falsework.”

“It's almost like a puzzle,” said Chad Fischer, Pulice's project manager, “and you have to make a schedule that has it all fit in together, so just the coordination and planning to make sure that everything is done on time and seamlessly without affecting traffic too much. We prepare daily plans, but sometimes it can be hourly if something falls through. It's like a domino effect where you have to re-evaluate and reschedule everything. We have one more set of ramps to construct and there are a lot of landscape walls and barriers, and we have the final landscaping to complete — planting of trees and granite mulch.”

“And there are a number of moratoriums that impact the closure dates because of the facilities around here — the casino and the spring training facility,” he said. “In addition to ADOT, there are two other partners — the Salt River Pima-Maricopa Indian Community, 90 percent of this job takes place on their land and the city of Scottsdale. We have to work with their schedules.”

The night work is reserved for certain aspects because they require full closures, which could also have crews working on weekends.

“Once you close a ramp,” said Fischer, “you have 60 days to re-open it and we work hard to make sure to open the ramps on time.”

The regular day shifts last eight hours and on a daily basis, there are about 150 Pulice and subcontractor employees on site. The major subcontractors include: McNeil Brothers for PCCP, curb, gutter, and catch basins; Roadway Electric for signing, lighting and ITS; Valley Crest for landscaping; TPAC for precast girders; and PAVECO for AR-ACFC Paving.

The work is taking place year-round, and in the summer, a lot of the concrete pours are done at night due to the heat. Heavy traffic has also led to all of PCCP placement being done at night.

“This is the only way to stay on schedule,” said Fischer. “Everything else was done during the day. We have sufficient space, for the most part, for our equipment, materials, and temporary offices and to do the work. The delivery of materials is scheduled to avoid rush hour traffic.”

Pulice has worked on similar projects and is applying lessons learned to this one.

“One of the things we learned is tying into the existing infrastructure, whether you are adding a lane to a road or a bridge,” said Campbell, “and having a better understanding of the behavior of the new structure. It's really about having a better methodology to get the work done.”

“This includes the removal of the existing overhang with bridge barrier to do the tie-in,” added Fischer. “Some of our demolition processes we used on previous projects are working well here.”

“We didn't crush any concrete and the rubberized asphalt we peeled off was not suitable to be reused,” said Campbell. “We did reuse some of the aggregate base and asphalt and incorporate it back into the fill. We separate the steel rebar from the concrete and send it to a recycler.”

Some of the key elements of the project are the bridges, particularly the 90th Street bridge, which had to be raised temporarily and then lowered to its final grade. Staying on schedule is critical to Pulice. Jim Meadows, the firm's operations manager stresses that many of his superintendents have between 20 and 30 years of construction experience.

“They know what has to be done and how to get the best from their crews,” he said. “We have a lot of young foremen and superintendents that move up through the ranks, who have started as apprentices and carpenters and it's the same on the equipment side. Mentoring programs are important to be able to pass on the experience of our senior people. We always have a number of people at different levels of training.”

Pulice's main shop/yard is about 20 mi. (32.14 km) from the work site, but this project has between two and three onsite mechanics.

“If something breaks down,” said Meadows, “you cannot afford to wait an hour for the mechanics to get out there and take care of it. You need to have the mechanics here all the time to get you back and running. The majority of their work is preventative maintenance.”

The equipment operators do daily checks and report any problems to the supervisors. A fuel/lube truck visits the site every afternoon to ensure that the tanks are full and fluids are replaced.

So far all the equipment being used is from the Pulice fleet and when needed, specialized equipment and vehicles are rented from local dealerships. New equipment still under warranty is repaired by the dealerships.

“We buy mostly Caterpillar equipment,” said Meadows, “but we also buy some John Deere equipment. Most of our equipment is purchased locally.”

These dealerships include Empire and RDO.

“It's another tool that provides real-time information,” said Campbell. “The goal is to catch major failures before they occur and it's definitely helpful, without question. Most of our equipment has Visionlink and we have some with GPS grading abilities for automation.”