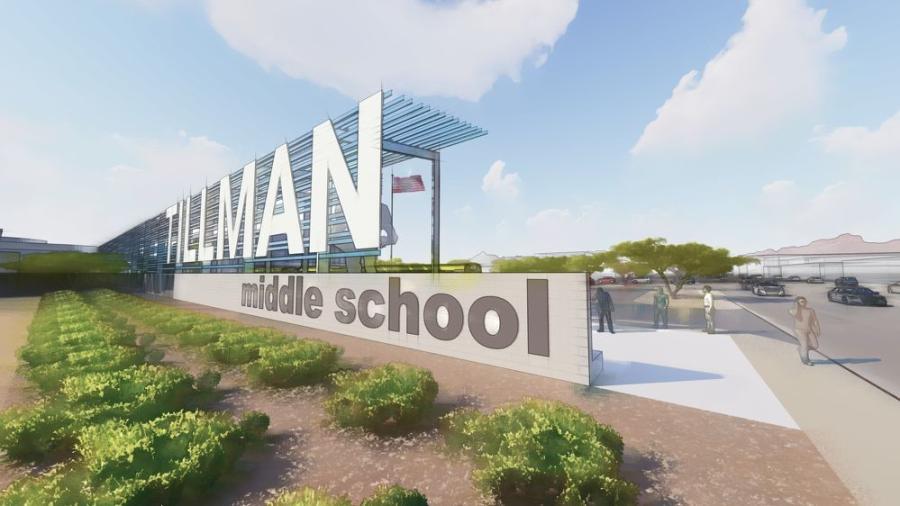 In Phoenix, work is underway on a new school bearing the name of one of the nation's most revered American heroes. Pat Tillman Middle School will include a nearly 70,000 sq.-ft. building with 42 new classrooms, administrative offices, STEM learning flex space and two new laboratories.

DLR Group is providing integrated architecture and engineering services on the project. McCarthy Building Companies serves as the general contractor 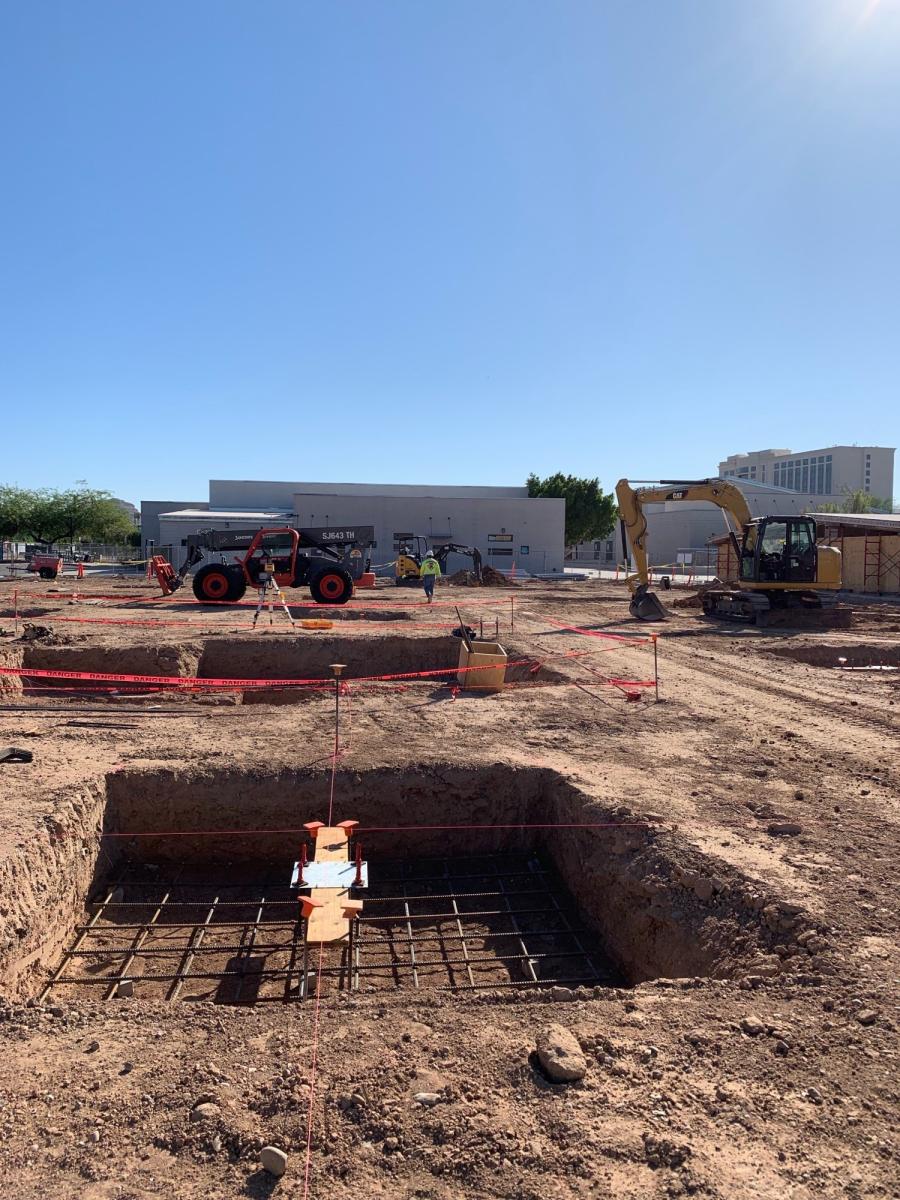 Last year, the family gave permission to use the Tillman name. The school is located just a few blocks from Arizona State University's Sun Devil Stadium, where Tillman became a standout on the football field before being drafted by the Arizona Cardinals.

Despite the flurry of activity, the school remains open for the 2019-20 school year, serving approximately 720 students.

"Construction is going smoothly," said Dr. Smith. "The district received the permit to proceed with phase two of construction."

"The biggest challenges while rebuilding on an existing campus are space constraints in trying to manage construction with an operating campus," said Smith. "Also, it extends construction because the existing portion of the campus cannot be torn down until completion of the school year in 2020."

The $16.9 million project is funded through general obligation bonds. The ongoing work is restricted to one section.

"Since the construction of the new building is two stories, only the north portion of the campus was razed to make room for the new building, while the southern portion was retained for instruction," said Smith. "The contractor is sensitive to the noise of some of the aspects of construction, and is attempting to time loud segments before or after the school day."

"Many of our utility shut downs have to occur during school break, which dictates the construction schedule that was built into the project's planning." said Horn. Using underground mapping, the design and construction team catered the design, including the Tillman tunnel design, to accommodate these existing utilities. In addition, special systems have to be coordinated to come online before old systems are taken down to ensure seamless transition." 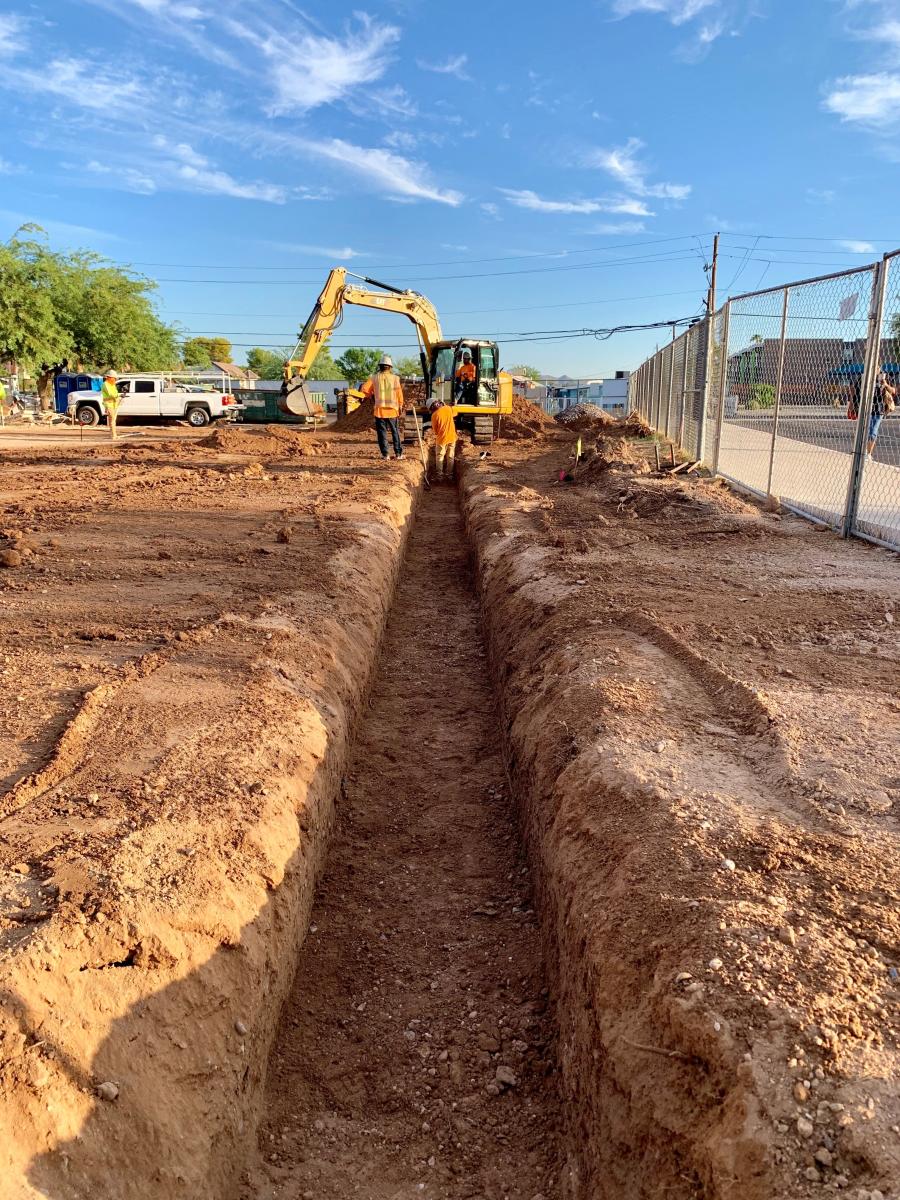 An excavator was used for the first scheduled demolition, and loaded debris was placed into dump trucks. The materials were sorted to ensure that materials that could be recycled or salvaged were taken to recycling facilities.The first demo was completed in three weeks. Next year's tear down is expected to take roughly four weeks.

Pre-work on utilities has already been completed.

"Currently, we are digging footings and pouring footings for the two new buildings," said Horn. "We also are installing underground infrastructure."

Horn noted that, so far, weather has not been an issue for crews.

"Usually, working in summer months in Arizona, the monsoons may cause some schedule impacts, but this summer the storms have not had a significant impact."

Site prep is taking place on the same site of the old buildings, so very little new disturbance, other than soil and dirt preparation, was necessary.

"McCarthy's in-house mapping team mapped the existing utilities on the entire site, so we could prep for new buildings with good knowledge of where existing utilities were located," said Horn. "This also was provided to the architect and the school, to assist them with design and planning needs for the project."

Regarding earthmoving work, the building pads are being over-excavated 5 ft. beyond the perimeter of the building, and 2 ft. below bottom of footings, then compacted per geotechnical requirements. The earthwork subcontractor is using loaders to cut and fill areas. The first phase of the site requires some imported soil. 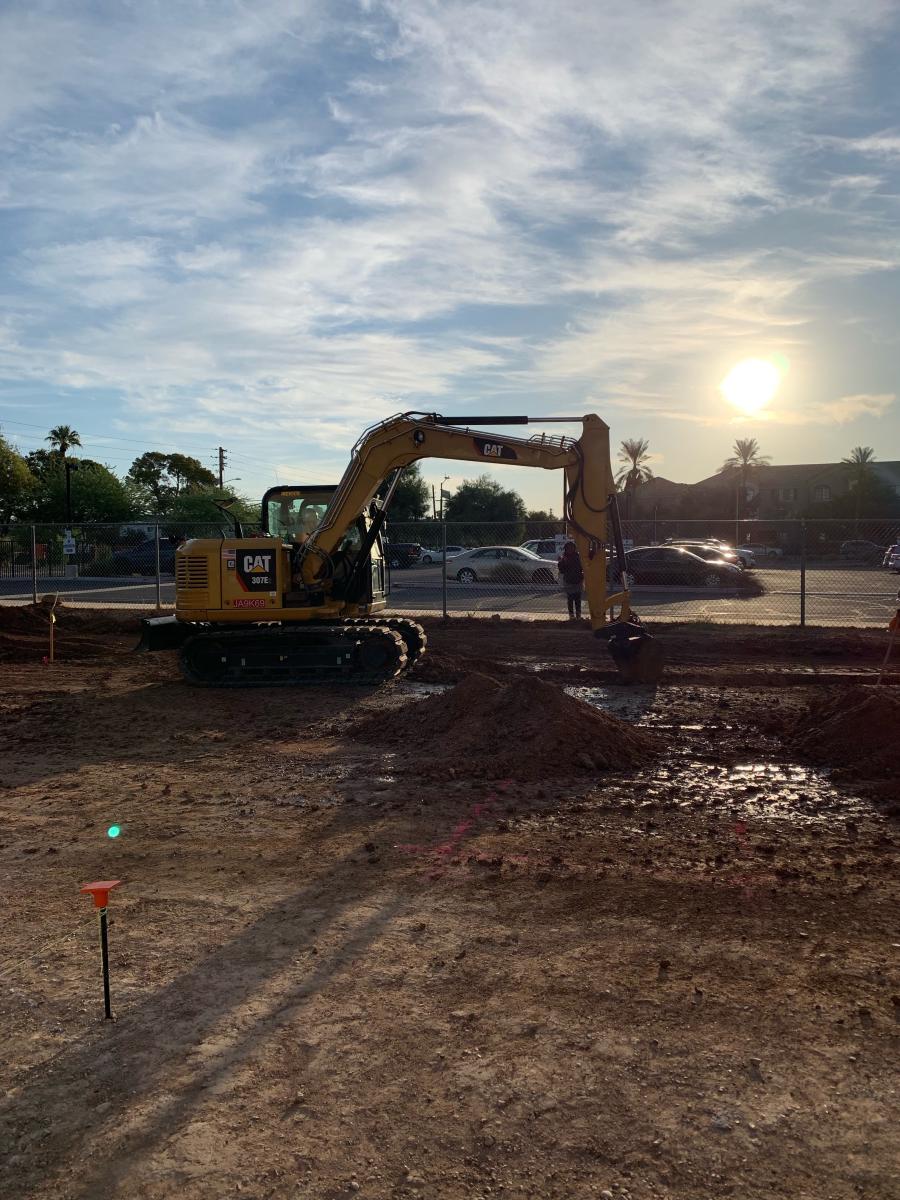 Horn said utility work will include modifications to the utilities that are already installed on the site, such as storm drain modifications from the old building to the new building, chilled water extensions and power feeder reroute.

"All work will be contained on the property. This project also requires extending and rerouting of existing utilities, which involves a good deal of planning. Due to the mapping of the project, this aspect of the work is greatly aided."

Horn said the excavation on the project required a selective vacuum truck to soft dig around existing utilities, including gas. There also will be some trenching work around the campus.

There will be some rework to the offsite sidewalks, driveways and miscellaneous patch back work of concrete. All construction work is contained on site and connected to a main road, so there are no issues related to access.

A tunnel will be constructed as part of the project.

"The tunnel will require extensive investigation to ensure the 20-foot deep caissons do not disrupt existing and live utilities for the entire length of the tunnel," said Horn. "Also, this work will occur during the summer months to not disrupt school operations. The drill-rebar-pour sequence requirements also are stringent, so productivity from the drill and crews will be key, as each caisson will have to be drilled and poured in a one-day span.

"McCarthy's mapping crew is crucial for the excavation of caissons. An alternate foundation design is being considered. This is a solution that could result in the foundation being less deep to help where there are areas of conflict with existing utilities. This is being evaluated on a case-by-case basis with regard to each caisson, and the solution will be based upon what makes the most sense and keeps costs and schedule on target. In addition to shade, the tunnel also will have solar panels installed to provide solar power, known as ‘smart shade'." 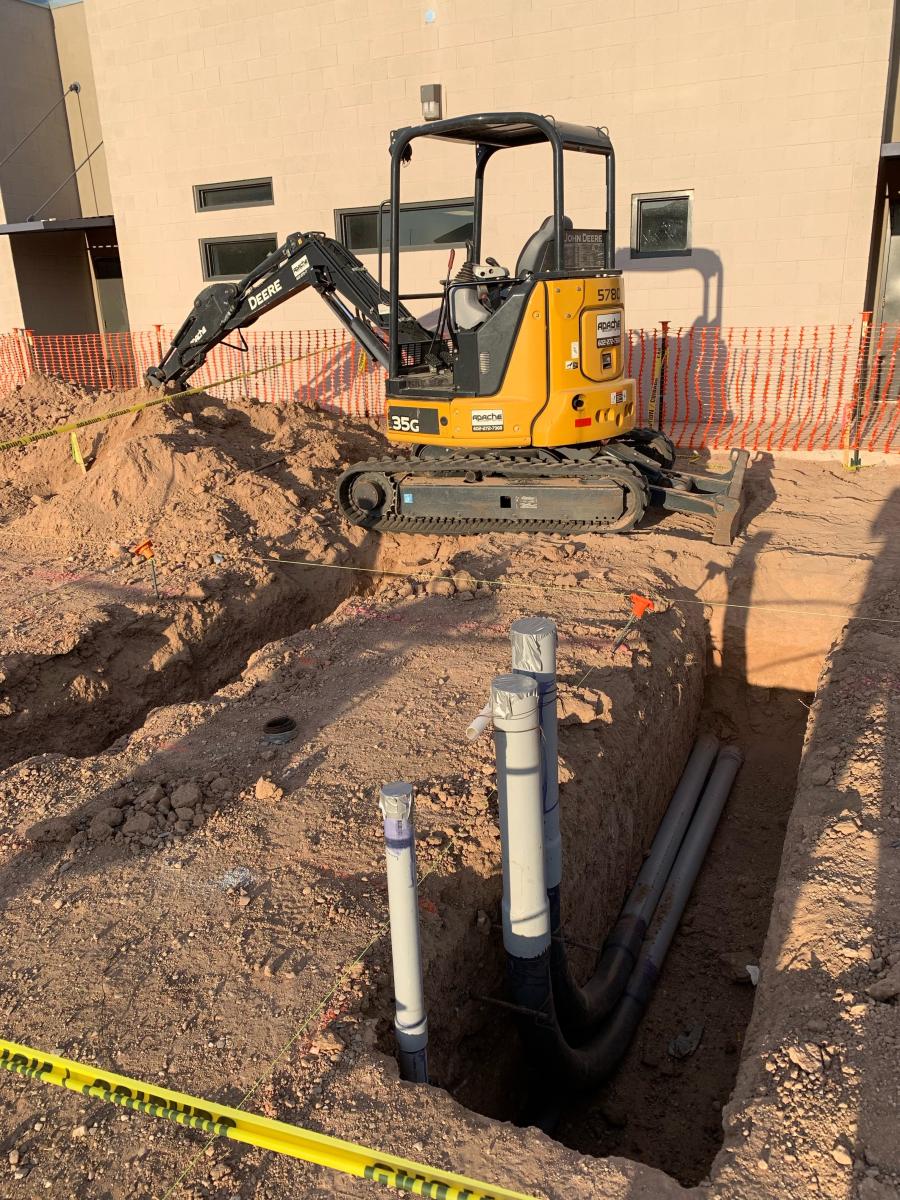 Main equipment being used on the project includes a John Deere 210 tractor loader, a Cat 938 wheel loader, a John Deere 644 wheel loader and a Cat 140 motor grader. An excavator and loader were used for the remainder of the earthmoving and excavating, while a pile drill rig will be required to construct the tunnel.

Main materials needed to complete the project include structural steel and concrete for the frame, CMU masonry, exterior installation finish system and metal panels that will be installed on the exterior.

Although much work remains, Dr. Smith is confident that students, teachers and staff will embrace the changes being made, which he described as a true team effort.

"This project has been successful due to the collaboration of our governing board, district patrons and visionary administrators who developed and articulated a plan for a new middle school designed to attract students from all around our city. With an emphasis on science, technology, engineering and math, college and career readiness and elite sports development, Tillman students have the opportunity to take their lives in a direction that will make the Tillman family and the Balsz community proud."

Smith added, "We are very proud to name our new middle school after Pat Tillman. Pat was a true American hero, who left his sports career to enlist in the United States Army in the aftermath of the September 11 attacks. As a student athlete, Pat modeled the importance of developing his intellect, physical capabilities and personal integrity for the betterment of others. His selflessness and dedication to his family, school and country inspire our students and staff to greatness." CEG