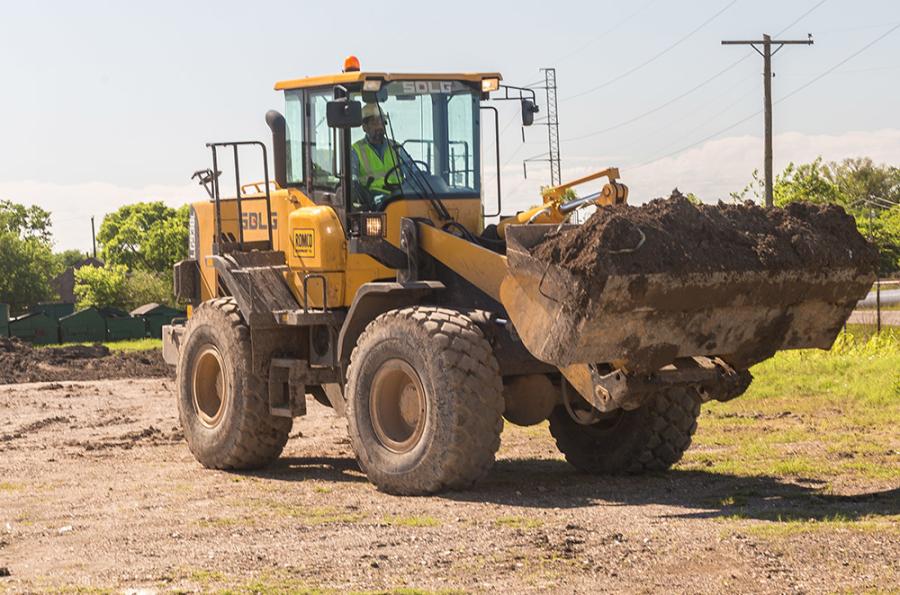 By using the wheel loaders instead of having a crew manually lift rebar sections, MCL was able to save at least one hour of unloading for each truckload.

MCL Contracting purchased its first two SDLG wheel loaders much like any other typical customer. Working in the concrete paving industry, the Richland Hills, Texas-based company only needed a loader for three to four hours each day and didn't require the features of a premium machine.

What began as routine wheel loader purchases, though, soon turned into lucrative capital investments, as the company began using the loaders to work out an improved method of placing rebar for continually reinforced concrete paving. Using its two SDLG wheel loaders in conjunction with other equipment, MCL has dramatically reduced the difficulty of its operations and reduced cost.

“We first purchased the SDLG wheel loaders to unload trucks of rebar at the job site when we're placing reinforcing steel for concrete paving,” said Megan LaPointe, president of MCL. “We were dependent on the general contractor to unload and move heavy rebar on the job site and vulnerable to their schedule, so we wanted to get a little more control over our operations. We only needed the wheel loaders working a few hours each day, so purchasing more expensive loaders didn't make sense.”

By using the wheel loaders instead of having a crew manually lift rebar sections, MCL was able to save at least one hour of unloading for each truckload. The move immediately began to save both time and money for MCL — at three trucks per day, the company began shaving off three hours of unloading time a day.

“The SDLG really held its own against what we expect from a premium model with a higher price point,” LaPointe said. “We probably only have a 40 percent utilization rate, and sometimes the machine might even sit for a week or two. It fits our needs perfectly. We've had no downtime or repair costs to deal with, either.”

Shaving a few hours each day from MCL's material handling duties was only the beginning.

Soon the company began to integrate the machine more into its rebar paving projects. In conjunction with a Combilift, a multi-directional forklift, MCL began using the SDLG wheel loader to automate its roadwork processes.

“Reinforced concrete rebar paving has always been a manual labor job — the crew carried the rebar from bundles on the job site, and then positioned them in a place to be tied,” LaPointe said. “We have made it more automated with the SDLG wheel loaders.”

MCL uses an SDLG wheel loader and the Combilift, which can swivel in various directions, to dual-lift the rebar and dual-carry it into place. The SDLG is fitted with a forklift attachment, and with the Combilift, MCL uses the four forks from both machines with a spreader bar to ensure the rebar is held and placed evenly. The rebar is then guided by hand toward the ground.

“The individual segments of rebar weigh about 60 lbs. each — they're heavy, and by using the wheel loader and multi-directional forklift, the process minimizes potential injuries. This makes the job less physically demanding,” LaPointe said. “And we've been able to reduce our crew needs by half. We used to need 10 to 12 guys per job, now we only need six to eight, which has again reduced our costs.”

The ease in physical labor has not only made the job site more efficient, it has enabled the company to attract a younger workforce. A well-cited problem in construction and manufacturing, companies often find difficulty in replacing their aging workforces. LaPointe said that hiring has become less difficult because the job “is not as physically abusive.”

MCL purchased the two SDLG wheel loaders from Dallas-based Romco Equipment, with which the company has done business several times. LaPointe said buying the equipment from a dealer the company knows and respects gave it the confidence to take a chance on SDLG. In fact, MCL had initially only purchased one SDLG loader, and it performed so well that the company bought a second a few months later.

MCL Contracting LLC is an official woman-owned business that has operated in Texas for five years. It is a subcontractor that specializes in rebar installation.