MDOT $1B Modernization Work Under Way 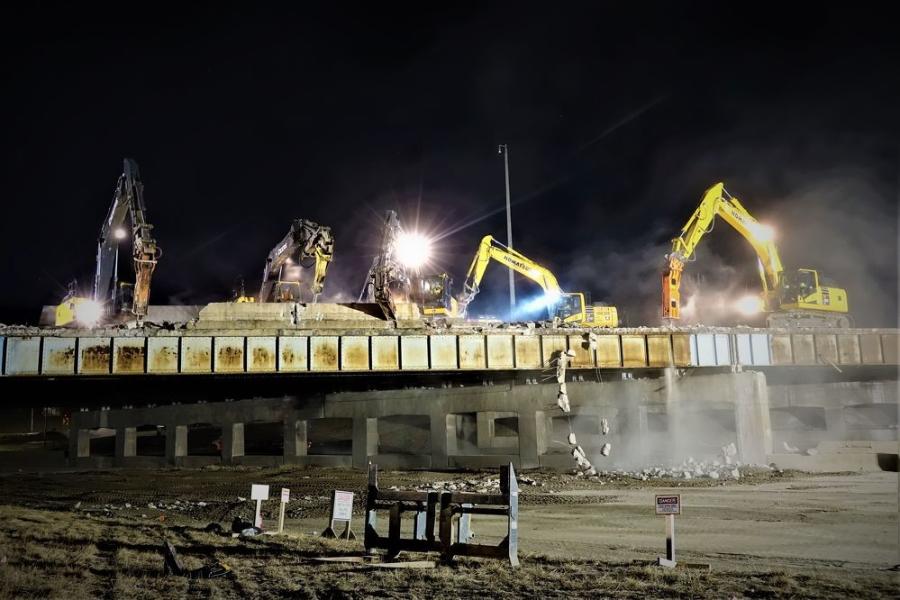 The majority of the bridge work is being done by day, but some night work is required for demolition and steel beam placement.

As part of the advance work for the Michigan Department of Transportation's (MDOT) approximately $1 billion plus Interstate 94 Modernization Project in Detroit, a number of bridges are being demolished and replaced between now and the anticipated start of the project in 2022.

Started at the beginning of March 2017, C.A. Hull Co. Inc. began replacing the Chene Street and Gratiot Avenue bridges and demolishing three pedestrian bridges as part of the Advanced Bridges Phase 1 program. The $24 million contract is scheduled to be completed by Nov. 15, 2018.

“The I-94 Modernization Project is undergoing changes to the original design to ensure that the project merges expectations of stakeholders, with safety requirements of the FHWA,” states the project web page. “In the meantime, MDOT is rebuilding several bridges that are in very poor condition. This Advanced Bridges work does not impact proposed modifications.”

“We want to maintain traffic on Gratiot,” said Bonnie Yu, MDOT's construction engineer for the work. “When the new portion [northbound side] is built, we'll demolish the old portion [southbound side] and then rebuild it.” 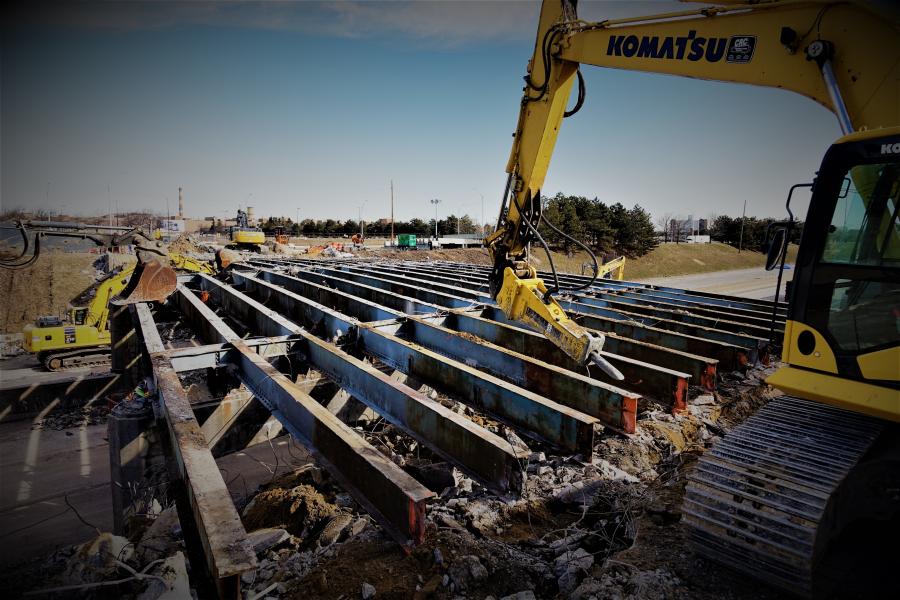 The Chene bridge will be rebuilt as it was, while the Gratiot bridge will be wider to provide 11-ft. wide sidewalks on both sides, along with planter boxes.

“We are building the bridges longer in length to accommodate the future widening of I-94,” said Yu.

The demolition of the bridges occurred on the weekend between March 16 and 19, which had I-94 closed to traffic from 9 pm Friday to 5 am Monday.

“The demolition operation went very well,” said Yu. “In fact, we were able to open I-94 on Sunday night. We didn't have any issues.”

Since demolition work requires the entire freeway to be closed, MDOT schedules the work to occur during low peak traffic volume periods, such as weekends, so that they do not interrupt weekday commuting traffic. This work is also coordinated with other ongoing projects.

Carbon fiber reinforced concrete was selected for the Gratiot bridge because of harsh Michigan winters and the use of road salt to ensure safety of the motoring public. MDOT is pushing for innovative materials and is trying to create new jobs with the new materials. The material has the ability to resist corrosion. MDOT has used this material on a few projects and has had success with it.

“Everything is proceeding on schedule,” said Yu. “The project is going very well. I don't foresee any issues in the months ahead.

“The substructure of the Gratiot bridge should be ready by June 15,” Yu added, “and then we'll set the new beams. We'll do a full freeway closure to set them and come the end of July, the northbound bridge will be completed and open to traffic. The southbound bridge will be demolished and rebuilt by November 15.”

Many of the construction challenges were anticipated and worked into the plan.

“In Detroit, utilities present challenges based on the age of the city and its infrastructure,” said Yu, “and there have been a few conflicts that we've had to work through. We may be delayed slightly due to that, but we're in the process of evaluating it.”

The majority of the bridge work is being done by day, but some night work is required for demolition and steel beam placement. On peak days there are between 30 and 40 construction workers on-site. 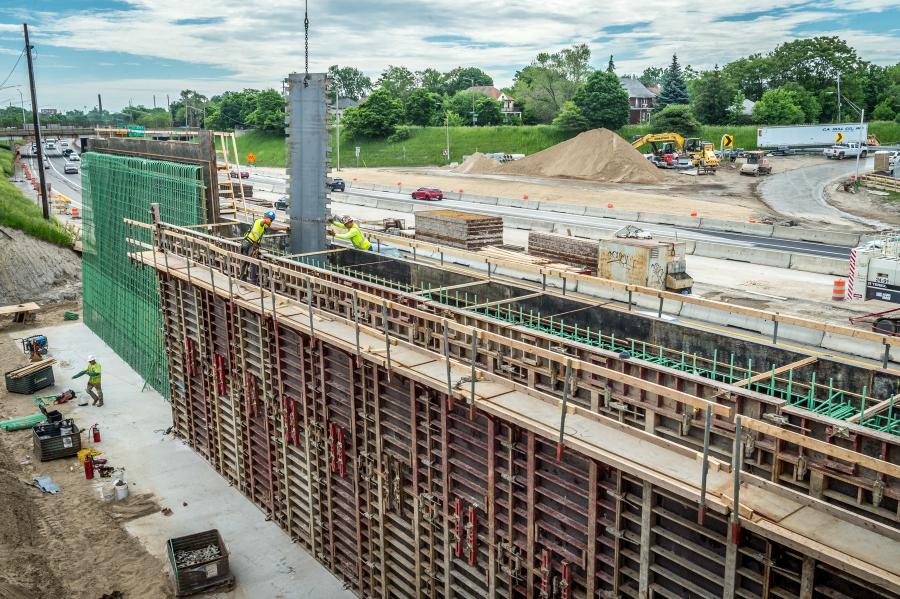 Daily safety meetings are held prior to the start of each work day, and C.A. Hull is coordinating the efforts of the subcontractors.

A C.A. Hull suggestion to reduce the cost and quicken the construction, via a value engineering change proposal (VECP), has been approved. This led to the elimination of one stage of the schedule to construct temporary median crossovers on I-94 for maintaining traffic during the future pier piling work at Chene bridge. With this plan, the pier piling work would be completed during a previously planned weekend full-freeway closure. The contractor will be paid 50 percent of the net savings from the VECP.

The three pedestrian bridges at Springfield, Rohns and Helen will be torn down over the weekend at the end of September. 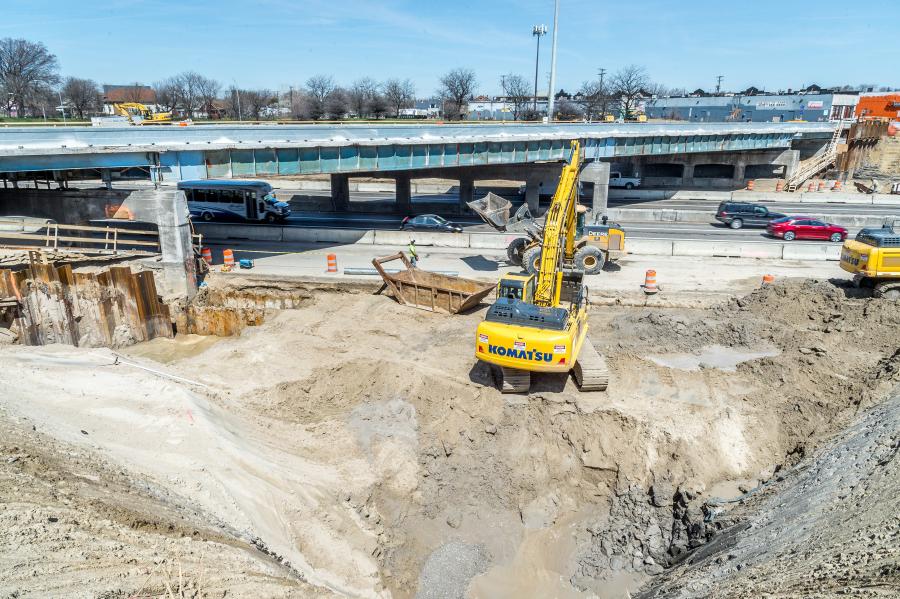 C.A. Hull is using a variety of Komatsu and John Deere equipment for this project.

HNTB is helping with construction oversight for the project, along with inspectors from other firms.

As noted, the Interstate 94 Modernization Project will likely start in 2022 or 2023 as the overall plan undergoes a revision.

The project is ambitious but much needed, particularly as Detroit is in the midst of rebounding from an economic decline which hit the city hard, and which is resulting in new commercial, residential and road construction.

“Nearly 30 years ago, MDOT recognized the need to reconstruct I-94 in Detroit,” states the project web page. “In the 1990s, the department conducted an extensive Environmental Impact Study (EIS) aimed at (among other things) building community consensus on how to repair I-94. In 2005, the Federal Highway Administration issued a record of decision that approved the reconstruction of a 6.7-mi. segment of the freeway in the city of Detroit.

“In 2017, MDOT announced plans to prepare a Supplemental EIS to study alternatives proposed by stakeholders,” the page added, “that focused on using existing city streets as local connections instead of building new, continuous service drives adjacent to the freeway as proposed in the original plan; modifying local access ramps to and from I-94, M-10 and I-75; [and] adding 'Completed Streets' bridges to provide multi-modal access, making them user-friendly for cars, bikes and pedestrians with wider walkways/paths separated from traffic and landscaping.”

The modernization plan tackles several components, including the reconstruction of 6.7 mi. of freeway from the I-94/I-96 interchange to east of Conner Avenue, the rebuilding of 67 bridges and six railroad overpasses, new interchanges at I-94/M-10 Lodge Freeway and the I-94/I-75, the elimination of left lane exit and entrance ramps and continuous I-94 service drive from Conner to Trumbull.

The project is being backed financially by the Federal Highway Administration, with MDOT having management and oversight responsibility, which has it overseeing all project activities from the preliminary engineering and environmental phases through final construction.

“MDOT has hired HNTB as the owner's representative,” states the web page, “to serve as an extension of the senior project manager, and to assist with project design, management, cost, schedule and quality.”

In the summer of 2005, a record of decision (ROD) was issued that allowed MDOT to move forward with final design, right-of-way acquisition and construction activities; additionally, a detailed engineering report was completed that provided key information necessary to move the project forward.

In 2016, public meetings were held, as well as meetings between MDOT and Detroit's planning and development and engineering departments to review the vision for neighborhood mobility and connectivity. During these meetings, officials also looked for possible project modifications to help support that vision, which included modifications that improve connectivity and better utilize existing surface roads without expanding the freeway footprint.

As discussions continued, MDOT announced plans in 2017 to prepare an SEIS to address proposed modifications to the project — a process that is expected to take at least two years.

The initial estimated cost of the project was in the $2 billion plus range, but the new plan may be reduced to $1 billion based on the proposed modifications.

Rob Morosi, an MDOT communications specialist, noted that the freeway was constructed in the late 1950s and needs to be rebuilt and upgraded to meet current and future needs and current design standards.

“But this also entails extensive utility work — electrical and water,” he said. “The freeway is below street level, so proper drainage, lighting and other related elements are vitally important. The freeway is well over 60 years old and has never been rebuilt. The fabric of the community had changed and 10 years after we received the ROD in 2005, we went through all the engineering reports.

“We started seeing more building in Detroit in the business and residential sectors, and it became a sticking point in the community that we were going to take out a significant amount of right-of-way for dedicated service drives,” he added. “We listened and went back to the drawing board to provide something that the community wants today. We continue seeking feedback as the rebound continues as we are seeing more robust residential areas develop.”

A considerable portion of the freeway passes through neighborhoods and another large portion covers the “North Downtown” or mid-town section — a mixed-use area. There are also several schools and a university adjacent to I-94.

Completing the advanced bridge work is essential to having safe infrastructure but also to make the freeway reconstruction more efficient when it commences.

“It will allow us, when we're replacing the freeway, to maintain local access for neighborhoods,” said Morosi.

Phase 1 of the bridge work covers 2018 and 2019 and will see the replacement of the Concord Avenue, French Road, Mount Elliott Street, Second Avenue, Cass Avenue and Brush Street bridges, as well as the demolition of the Helen Street, Rohns Street and Springfield Avenue bridges. Phase 2, covering 2019-2022, will see the replacement of the Grand River Avenue, East Grand Boulevard, Frontenac Street, Burns Street and Milwaukee Avenue bridges over I-94, as well as two Conrail railroad bridges.

The project is also expected to help create jobs in the construction sector and give smaller firms an opportunity to participate in the economic benefits.

“That's a definite goal of ours” said Morosi. “We've engaged in a small business component, which we have done with the Advanced Bridges program that has brought in smaller firms to help with certain elements of design for the overpasses and assist in the construction. The intent is to get these firms, many of which are DBEs, into the process to gain experience on a state job and learn the different methods of getting through approvals in design and construction so that they can become pre-qualified for DOT projects. This enhances the competitive process of the bidding system, but also helps level the playing field so that we're not just looking at a few large firms doing all the work.”

This also translates into the larger general contracting firms having more choices in terms of subcontractors.

Morosi noted that the revised project will be divided into three segments, each with a competitive bidding process. The completion date has not been set yet.

“A lot of that is going to be dependent upon how many of the bridges get constructed in advance,” he said. “We're also investigating different methods to accelerate construction, and that could involve some innovative financing. These decisions have not been made yet. Right now, with the pay-as-you-go approach, we're probably looking somewhere in the neighborhood of 14 to 15 years.”

The road and highway construction sector has been monitoring the develop of the I-94 modernization plan, and MDOT will be providing information to it as the plan continues to take shape.

“The first domino to fall is going to be the SEIS and once that is completed, the second will be the approval by the feds to have a new ROD,” said Morosi. “Once it is issued, then we move full steam ahead in the preliminary engineering and design phase. The construction industry in Michigan and the mid-west is keenly aware of this project and keeping an eye on it.

“I am sure that there will be industry meetings that we will host to say 'this is what we're looking at and this is our preliminary plan to rebuild this infrastructure,'” he added. “It's also about making sure that all the players that want to get in on this have an opportunity. It's very important to us to make sure that their manpower is adequate enough to meet the demands of the job.”