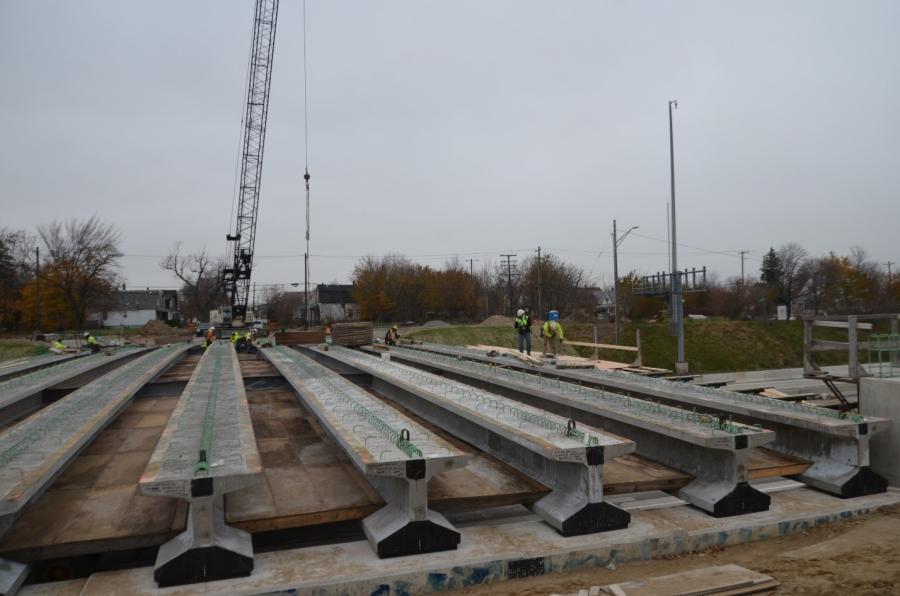 These concrete beams were set in late November as part of the I-94 modernization project in Detroit. The beams on the Burns Road bridge over I-94 are reinforced with carbon fiber composite strands, providing greater strength than steel without deterioration from corrosion. The technology is considered a game-changer for bridge building. (MDOT photo)

The Michigan Department of Transportation (MDOT) is leading the way in carbon fiber reinforced bridge beams — an evolutionary step forward — with the goal of a 100-year bridge in sight.

"The aim is bridges that last a century with minimal maintenance," said State Transportation Director Paul C. Ajegba. "This technology, developed in Michigan, is becoming wildly popular all over the country."

Since 2001, MDOT has been collaborating with Lawrence Technological University (LTU) in Southfield, Mich., on researching carbon fiber reinforced polymer materials in concrete bridge beams. That research has moved from the lab into the field, with projects now being deployed.

To understand why carbon fiber is such a game-changing technology, it helps to understand how modern bridges are built to withstand the loads of thousands of vehicles every day and extreme temperature changes for decades. Prestressing concrete with high-strength materials is one method of strengthening concrete. Traditionally, in this method, steel cables are installed inside forms before concrete is poured. The strands are then tensioned with a significant force, causing them to elongate. Once the concrete has gained strength but before it carries loads, the strands are released, compressing the concrete. Any subsequent loads on the beam would then have to overcome this built-in compression to actually stress the beam. Prestressing also reduces or eliminates cracking from concrete shrinkage; it allows thinner and longer spans.

Steel has been the go-to material for prestressing concrete for highway bridges, but it has drawbacks. It is prone to corrosion and deterioration under assault from extreme temperatures, water and deicing chemicals — conditions all too common in Michigan. Preventing corrosion and repairing damaged areas requires time and money and can limit the lifespan of the structure. Enter carbon fiber, an innovative alternative to steel. Carbon fiber strands have a tensile strength comparable to steel, but they resist corrosion and require less maintenance over time. Longer service life is the major benefit of carbon fiber.

"Rusting of steel elements is the leading cause of deterioration in our bridges. Since carbon fiber is non-corrosive, we are eliminating that potential for damage," said Matt Chynoweth, MDOT chief bridge engineer. "Using a material that will not corrode is a real game-changer."

MDOT engineers are putting this high-tech material to good use. In 2001, LTU, MDOT and the city of Southfield worked together on the deployment of the first three-span carbon fiber pre-stressed concrete bridge in the country. The Bridge Street bridge was outfitted with a variety of sensors and will be monitored by MDOT until 2025. Since then, more than a dozen bridges have been built throughout the state using carbon fiber components.

Chynoweth noted MDOT is deploying the materials strategically, using them on higher-volume routes.

The southbound I-75 span over the Sexton-Kilfoil Drain in Detroit incorporates carbon fiber in the beams. At 140 ft., they are some of the longest concrete beams in the state. Two bridges are currently being built with carbon fiber reinforced beams as part of MDOT's massive I-94 modernization project, also in Detroit. Those bridges will use beams with newer 0.7-in. diameter carbon fiber strands, allowing greater initial tensioning than steel.

MDOT and LTU have conducted years of extensive research on carbon fiber components, looking to optimize the design process and encourage more widespread use. They've subjected beams to 300 freeze-thaw cycles, combined fire/loading events, severe weather and other trials. Now, bridge designers have the information and specifications they need to predict how carbon fiber reinforced beams will perform under a variety of real-world conditions, as well as design tools for future bridge projects.

These efforts were recognized as among the highest value transportation research projects in the nation. The Research Advisory Committee at the American Association of State Highway and Transportation Officials (AASHTO) named it one of the top 16 research projects of 2020. This research also led to new MDOT and AASHTO design specifications.

A factor limiting the deployment of carbon fiber bridge beams is price. Carbon fiber elements can cost as much as three to four times more than comparable steel elements. But, based on the MDOT/LTU research, they are anticipated to last much longer than steel, so they may prove to be cheaper over the long run.

"We've calculated the ‘break-even point' to be about 22 years based on life cycle maintenance," Chynoweth said. "But since the data points only go back about 20 years, this is a theoretical estimate."

One of MDOT's main suppliers, Tokyo Rope, has built a fabrication facility in Michigan, which cuts down on some costs and delivery times for carbon fiber components.

Engineers are now closer than ever to their goal of building bridges with a minimum 100-year service life — an MDOT, as well as a national, target. As the use of carbon fiber continues to expand, this new material will get the opportunity to prove its long-term value to bridge designers and Michigan motorists.