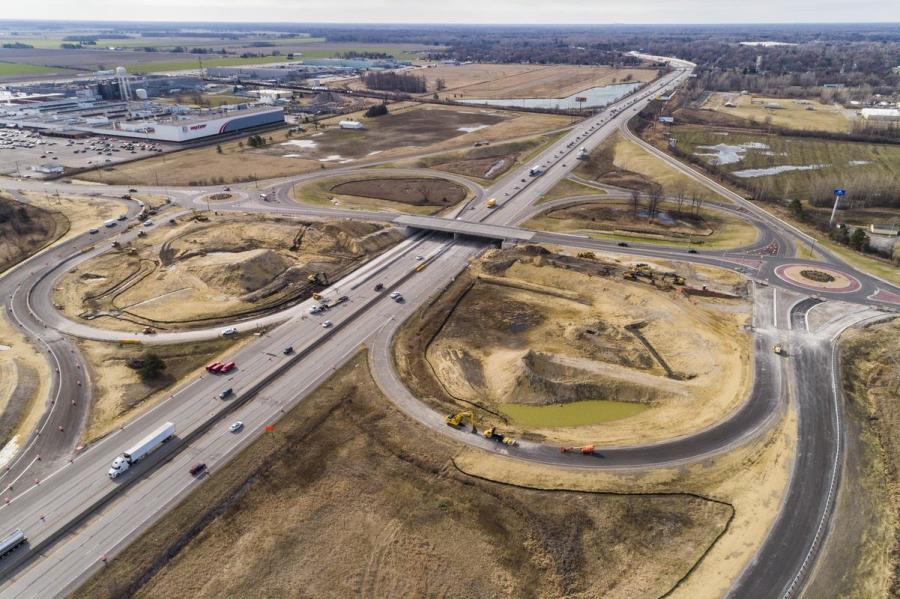 The interchange will include roundabouts at both ends of the bridge. The roundabout will be wider than the former interchange and feature two lanes throughout.

As road construction goes, the I-75/M-46 rebuild project in Saginaw County, Michigan, is fairly standard — with one exception. The $61.5 million job that includes a new interchange and bridge also calls for filling in 22 ft. of a feature known as "the dip."

"The dip exists because I-75 crossed under the railroad," said Brian Ulman, Michigan Department of Transportation (MDOT) construction manager. "You had to go underneath. The bridge was removed more than 10 years ago. So there is no longer a need for a dip there. Filling it provides better sight." 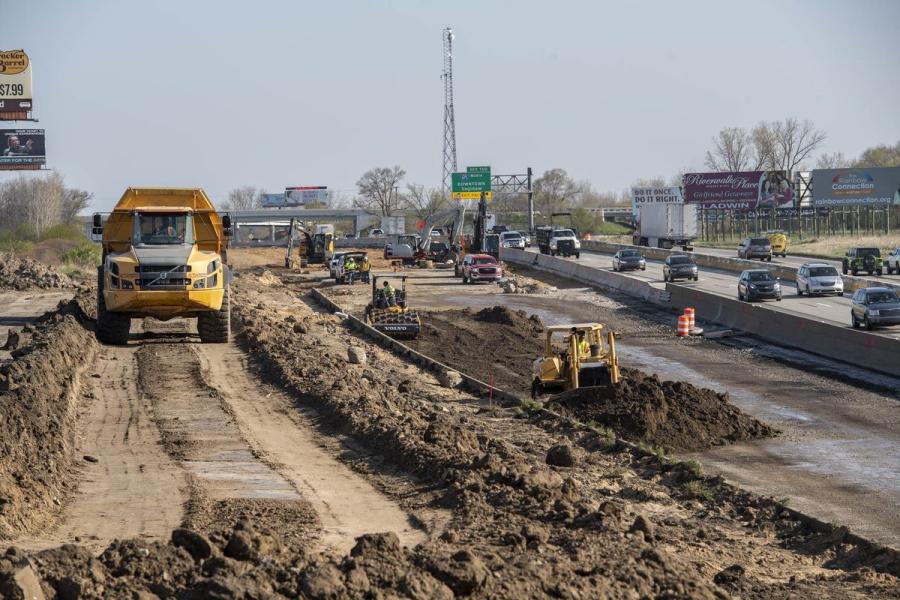 The road leading to the dip curves down and over, so drivers had to pay attention and follow the highway lane lines. It was not only a traffic safety concern, but prone to flooding.

"Even when our pump stations are working they can struggle to keep up with collecting water, but when the pump station goes … it's bad for us and we run the potential of having to close I-75 to traffic," said Jocelyn Hall, spokeswoman of MDOT.

The design-build project, awarded to Michigan-based CA Hull, covers 2.4 mi. of I-75 from Hess Avenue to I-675 In Saginaw County. It also includes the rebuilding of the I-75/M-46 interchange.

"One of the changes that is going to happen is right now to the old configuration is three lanes with a merge onto I-75 north and then drivers take the ramp off. Now with the new configuration on I-75/M-46, drivers can stay in the outside lane and go that route and you don't have to weave in and out."

The interchange will include roundabouts at both ends of the bridge. The roundabout will be wider than the former interchange and feature two lanes throughout.

"We still get a lot of people who feel very passionately about roundabouts, both in support and negatively," Hall said. "At this location, we had people asking if we were going to have a roundabout. The layout is similar to the other interchange I-75/M-81 we put in 10 plus years ago. It's the same with this interchange, I-75/M-46. It's an industrial area that gets an excessive amount of truck traffic. So far the people who will be driving through roundabouts seem in support."

The area also sees a large volume of traffic during the weekend when residents head north to lake homes and later return to their primary residences. That is a significant consideration in construction schedules and traffic control, the latter which is managed with what MDOT calls "zipper walls." The moveable barrier walls come in 2-ft. sections and are hinged. They are moved with a machine designed to reconfigure the wall as necessary. 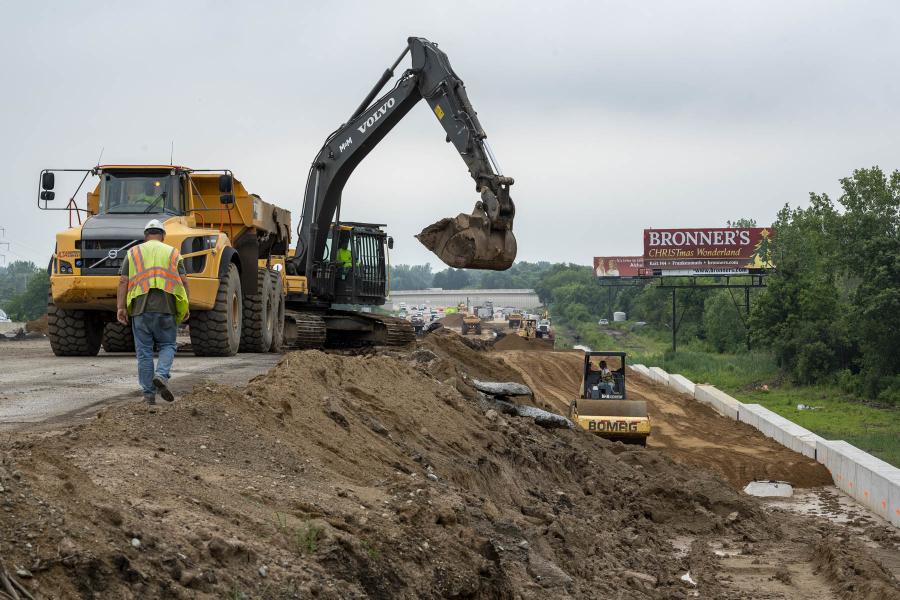 MDOT included verbiage in the contract stipulating that the walls will not be moved until the state gives the contractor the OK. If they don't move the wall during the agreed upon time frame, there is a penalty of up to $2,500 an hour or a maximum of $60,000 a day.

"Years ago we had a contractor move the wall too early and because of that we have more specific timeframes in the contract or else it creates congestion," said Hall. "That time they moved it too early on a Saturday of the July 4th weekend. It created seven plus hours of congestion before everything flushed out. They moved the wall three times in one day. It was significant. The reasoning behind being so specific is we have to make sure the northbound congestion has been flushed out. We move it on a Saturday afternoon. That way, if there is a mechanical issue it gives them time to address any kind of issue before it creates an immense amount of congestion. We've become very specific for time and back up plans, all based on learning from incidents. When we chose these time frames, it's pulling a 5-year average of what time of day congestion was heaviest. It's not throwing a dart at a map. It's based on reviewing what those volumes look like on typical Saturdays."

The I-75/M-46 project has been on the drawing board for a number of years and is one of the last portions of I-75 in the area to be rebuilt. It is scheduled for completion in the spring of 2022. CEG