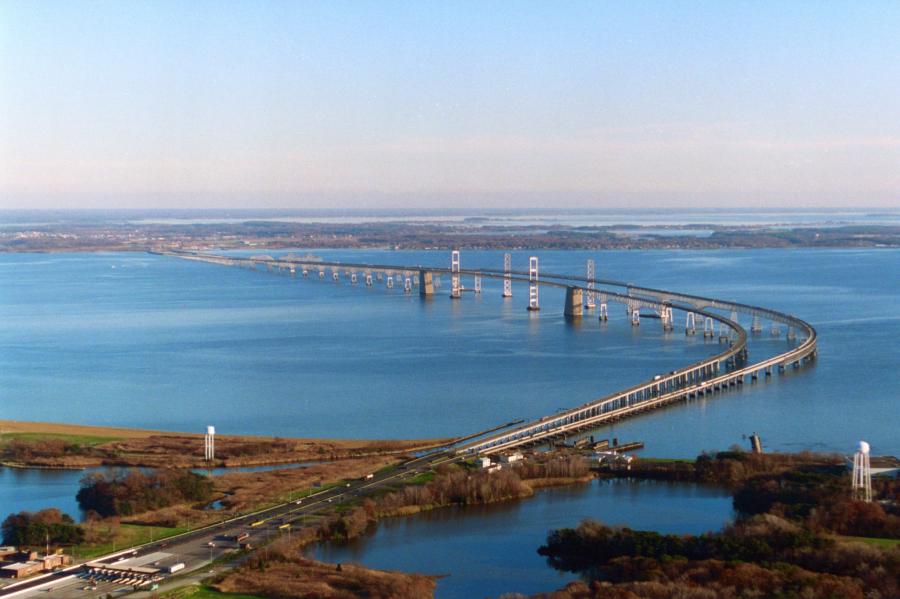 MDTA photo The Maryland Transportation Authority (MDTA) began a project in the summer of 2016 to rehabilitate the Chesapeake Bay Bridge.

The Maryland Transportation Authority (MDTA) began a project in the summer of 2016 to rehabilitate the Chesapeake Bay Bridge, which is officially named the “Gov. William Preston Lane Jr. Memorial Bridge” after the governor who initiated its construction.

The dual-span structure crosses the bay in Maryland and connects the Eastern and Western Shores. It is part of U.S. Routes 50 and 301, and serves as a connection between the Baltimore-Washington Metropolitan Area and Ocean City and other coastal destinations.

Project notice to proceed was given on July 11, 2016, with expected completion set for summer of 2018.

The contract award amount is $29.6 million, which is completely funded by toll revenue. The project is part of the MDTA's $273 million system preservation and safety investment at the Bay Bridge over the next six years.

Kiewit Infrastructure Company is the prime contractor, with Nick Scarpato serving as the project manager.

The project includes the installation of supplemental cables; rehabilitation of the suspension span superstructure and bearings; and priority repairs found during annual inspections.

“Maintenance of traffic on the Bay Bridge during construction is a challenge,” said John Sales, public affairs manager for the MDTA. “The current plan is to perform most of the work during off-peak hours, i.e. night time full bridge and double-lane closures and temporary daytime lane closures, throughout the duration of the project. There are multiple construction and maintenance projects ongoing at the bridge, so significant coordination is required. Daytime work will be performed using alternative access methods. Workers will take boats to platforms that are not visible from the roadway.”

Sales noted that the project involves a comprehensive suspension span rehabilitation. Multi-faceted work will enhance the durability and extend the useful life of the original suspension system and help the bridge perform optimally in all weather conditions. This is the first time this work has been done in Maryland, although it has been done in other states.

Major equipment used on the job includes a 180-ton crane for erection of main cable strands and various winch and jacking systems.

According to Sales, crews installed access platforms in various locations along and beneath the westbound Bay Bridge roadway. Installation of permanent repairs, visible from the roadway, began in December and will continue throughout 2017.

“This project will include geometry improvements to the existing structure,” Sales noted. “Though it may not be perceived by the traveling public, the work will improve the functionality of the bridge by allowing natural expansion and contraction of the bridge elements to occur with reduced friction on the existing components.”

The original bridge opened in 1952. At the time, it was the world's longest continuous over-water steel structure, with a length of 4.3 mi. (6.9 km). The parallel span was added in 1973. They are relatively similar in structure, and were both designed by J.E. Greiner Co. (which became a part of AECOM through the acquisition of URS Corporation).

According to Wikipedia, the bridge is known as one of the scariest in the United States because of its height, the narrowness of the spans with no hard shoulders, the low guardrails, and the frequency of high winds that occur in the area.