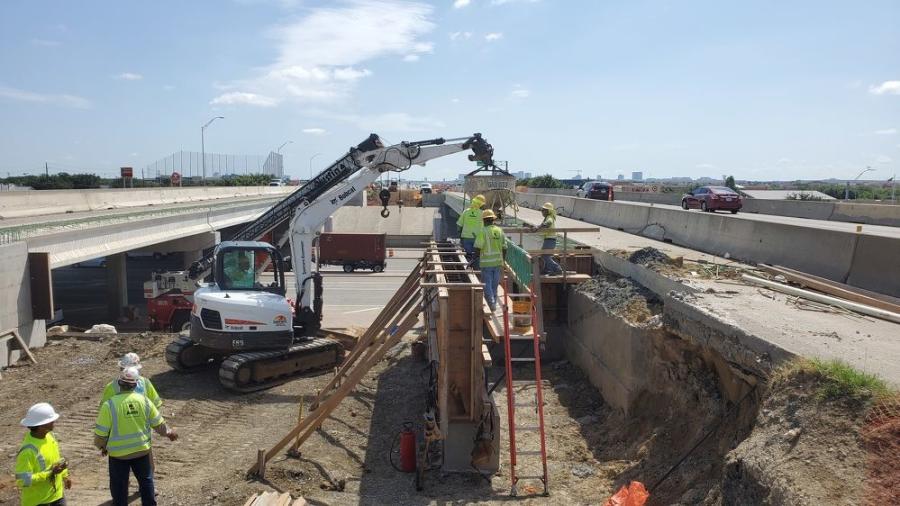 Completion of concrete paving, traffic rail and roadway striping from DNT to the KCS Railroad will be a major accomplishment for workers, as temporary barriers can be picked up and reset for work west of KCS. (NTTA photo)

Construction crews in Texas are working night and day to alleviate congestion during peak drive times for motorists in Denton and Collin counties. The Sam Rayburn Tollway Fourth Lane Project is a part of the North Texas Tollway Authority's (NTTA) ongoing plans to improve traveling conditions in the area. 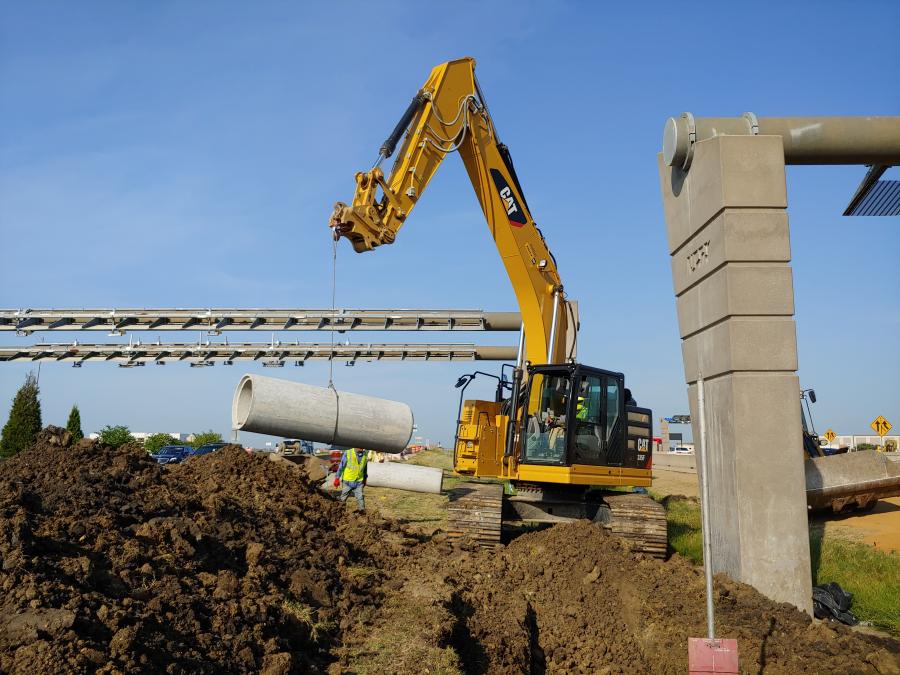 The $200 million project includes the addition of a fourth lane in both directions throughout the entire corridor from west of Denton Tap Road to U.S. 75. Bridge widening will be required during construction throughout the corridor.

A new ramp will replace the existing eastbound Parkwood Boulevard and Preston Road exit ramps and separate exiting and incoming traffic merging onto Sam Rayburn Tollway from the Dallas North Tollway (DNT) direct-connectors. Drivers coming from the DNT needing to exit to Preston Road will continue to have access to enter the new eastbound Preston Road exit ramp or enter eastbound Sam Rayburn Tollway. Auxiliary lanes will be added at various locations along the corridor to improve ramp merging areas.

The project is divided into two sections which are being built at the same time. West of Denton Tap Road to the DNT and DNT to U.S. 75 construction began in early January 2019, with completion expected in late 2021.

Lane and ramp closures and detours are required for the project. On the main lanes, much of the work will take place in the center median behind concrete barriers. Because of the work needed to expand bridges throughout the corridor, overnight closures of several city streets below the tollway main lanes is necessary. In addition, multiple short-term ramp closures will be needed for ramp improvements between the DNT and Preston Road.

According to Rey, the project required approval by the NTTA Board. NTTA, a non-profit entity, will pay for the entire project from its capital improvement funds, without issuing additional bonds/debt for the project.

Rey said motorists are having to deal with minor inconveniences during the ongoing construction, but there are no significant issues.

"The work takes place in the center median, so it should have the least possible impact to drivers. Much of the work is being done in off-peak hours to lessen impact." 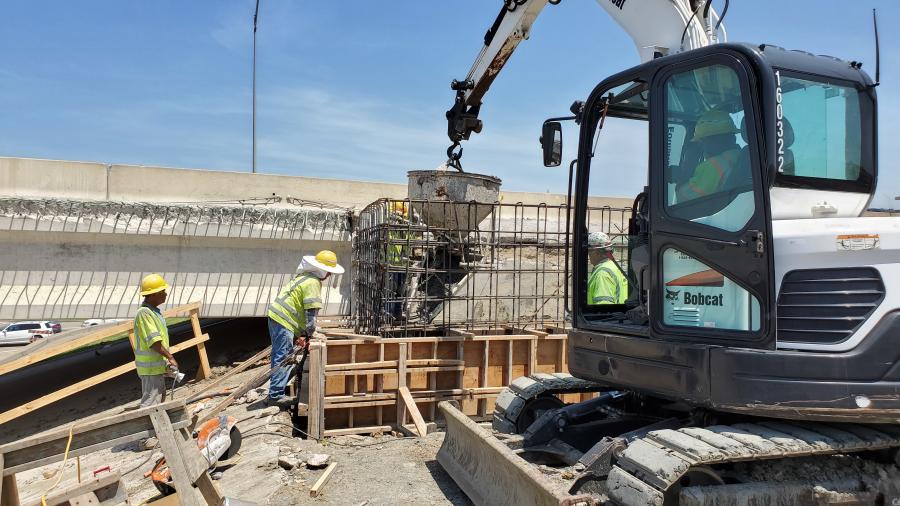 Work on the project must be performed concurrently in order to meet the schedule established for such a large job.

Meeting the aggressive schedule, while keeping traffic moving at a steady pace, is the overall goal for the construction team.

Clearing and grubbing the entire length of the project has already been completed, as has sub-base for new concrete pavement and selected bridge widening. Currently, deck work is under way at the Legacy Drive intersection. Crews are constructing foundations and columns at intersections that include Parkwood Boulevard, Preston Road, Hillcrest Road/Rasor Boulevard and Coit Road.

Work on the Sam Rayburn Tollway bridge over the Preston Road interchange is also under way. Beams are being placed over White Rock Creek.

Kyle Poss, Austin Bridge & Road project manager, said the job is not without its share of obstacles.

"Tight work zones, coupled with limited allowable lane closure times, make production a challenge. Ingress and egress points on an inside widening are limited. Temporary barrier, which is absolutely necessary to protect workers and commuters, can infringe on production work."

Crews also must deal with large volumes of traffic traveling at a high rate of speed. 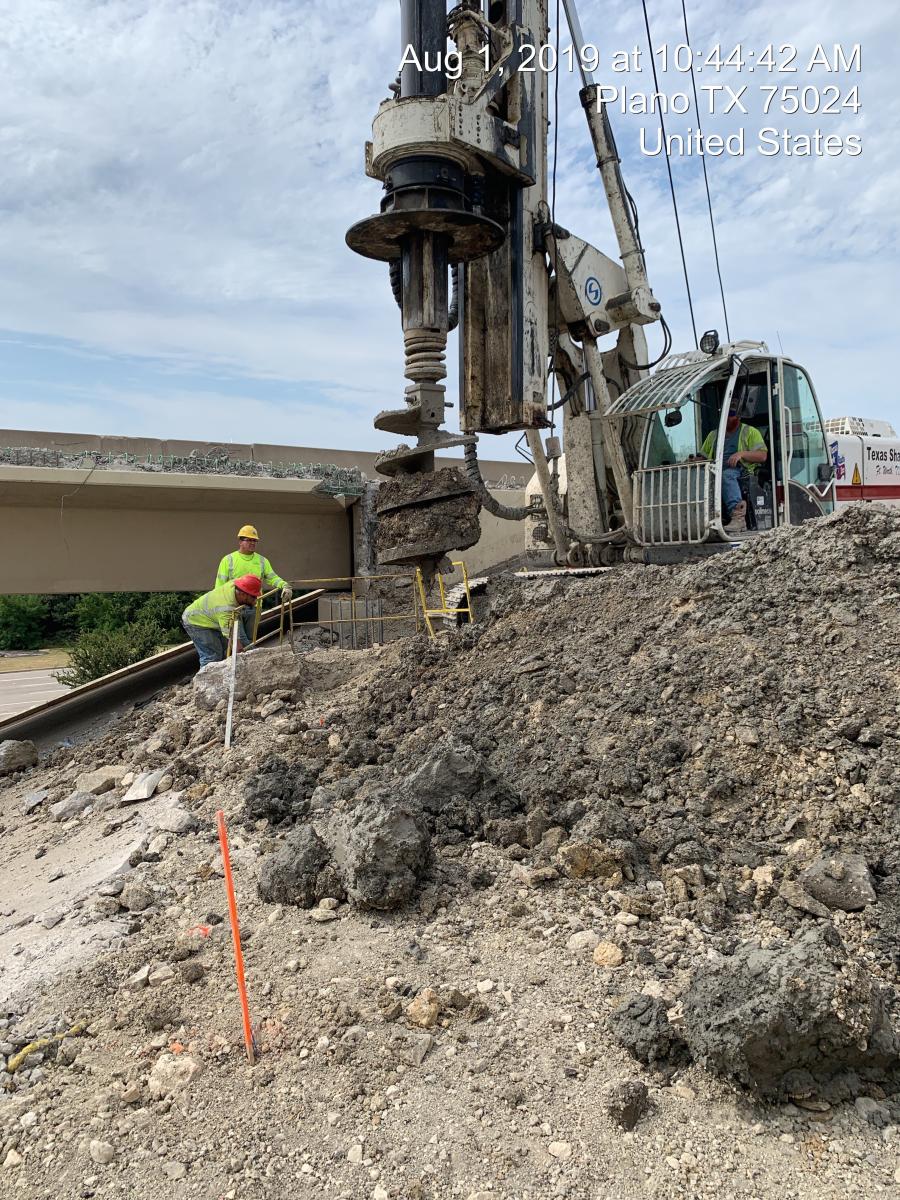 "Our number one goal is that workers, the traveling public and the various project stakeholders return safely to their families on a daily basis. Managing traffic of this magnitude is a challenge."

In addition, unpredictable weather has been an issue.

"We experienced unusually severe levels of rain in the late winter and spring 2019," said Poss. "Because all the new subgrade requires undercut and replacement of subsoils, we are essentially digging a large bathtub along the roadway, with very little opportunity to maintain drainage. It can take up to three to four days after particularly heavy rains to dewater and properly dry out the work zone.

"Also, because of the in-situ material, especially deep foundations for bridge substructure have to be completed. These can be up to 72-in. in diameter and 100 ft. deep. These must be built under bridges that are only 16 ft. tall in some locations."

Activities are often carried out after the normal work day, which means drivers must be extra cautious during construction. Night work is imperative to completing the work on schedule.

"Our biggest window to work is at night, as this minimizes interruptions to the public — anything requiring a lane closure, such as excavation, embankment, beam setting, bridge deck pours, hot-mix asphalt, concrete paving and any restriping of the roadway. Detailed look ahead schedules are prepared in order to determine what operations can most effectively be performed at night."

The project also calls for the placement of storm drainage lines.

"There are very few runs of new standalone drainage, as all drainage has been designed to accommodate higher volumes of surface water, yet tie into existing infrastructure," said Poss. "Overall, 48,000 linear ft. of drainage and 275 EA drainage structures will be built and tied in to existing. In some cases the pipe is laid in a trench up to 20 ft. deep in an area that's only 20 ft. wide so it will properly flow into existing structures. Special shoring and engineering control is necessary to protect the workers."

The entire roadway is constructed on select fill and treated with cement slurry to ensure longevity and ride quality of the new pavement surface.

"Nearly 300,000 cu. yds. of material will be excavated to waste or acceptable locations throughout the project. Cuts up to 6 ft. deep of existing material are required in various areas. An additional 250,000 cu. yds. is imported from select dirt pits several miles from the project. Anywhere from 20 to 60 haul trucks on a daily basis are used almost around the clock the complete the earthwork." 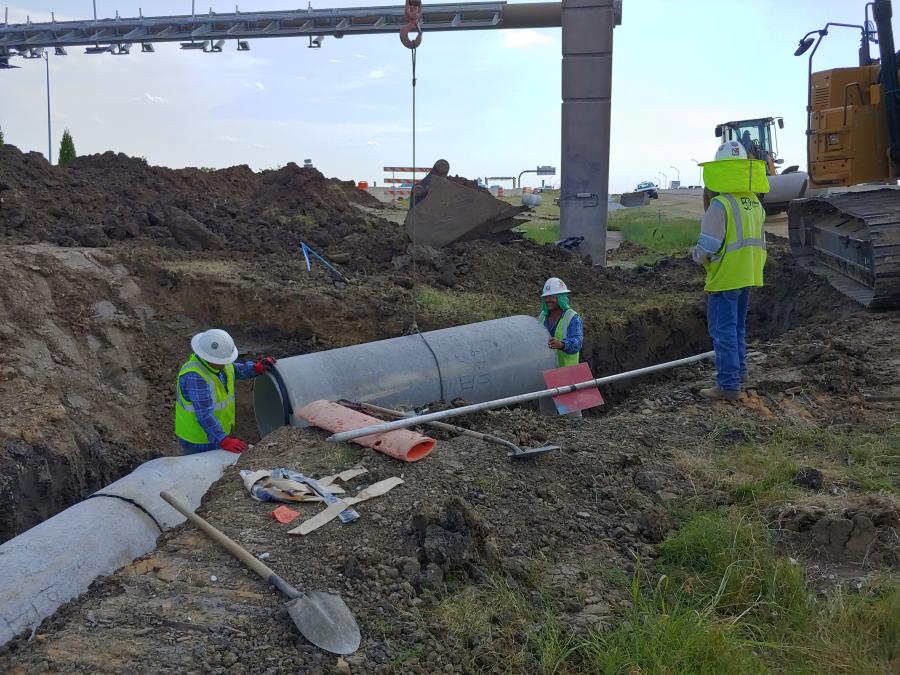 Regarding the leveling of subgrade in different areas, said Poss, "It's very important that the newly constructed roadway match the existing pavement surface, so drainage is maintained and ride quality is not sacrificed. The entire length of the existing roadway [27 mi.] was as-built and detailed grading models were set up by Austin Bridge and Road's survey department to ensure the accuracy of our work."

The project also requires the placing of concrete for columns.

"Formwork is designed by a professional engineer to assure there are no blowouts during placement of the concrete. After drilled shafts have been built, rebar cages are tied and set, the form is placed around the steel cage with a platform for workers to stand atop the column while pouring. The columns for this project are relatively short, so concrete is placed using a crane and bucket with a tremie pipe.

"Once the concrete has cured, the form can be removed and the concrete wrapped in plastic for further curing. After curing, the cap forms are set and concrete poured. Because NTTA requires a high level of detail in the concrete's appearance, special measures are completed by rubbing, patching and even sandblasting the concrete until it's accepted."

Poss said completion of concrete paving, traffic rail and roadway striping from DNT to the KCS Railroad will be a major accomplishment for workers, as temporary barrier can be picked and reset for work west of KCS.

"Completion of MSE retaining walls at the Hillcrest, Preston and Parkwood intersections will be another large milestone as this allows for all excavation of dirt in the center median to be completed and placed behind the walls." 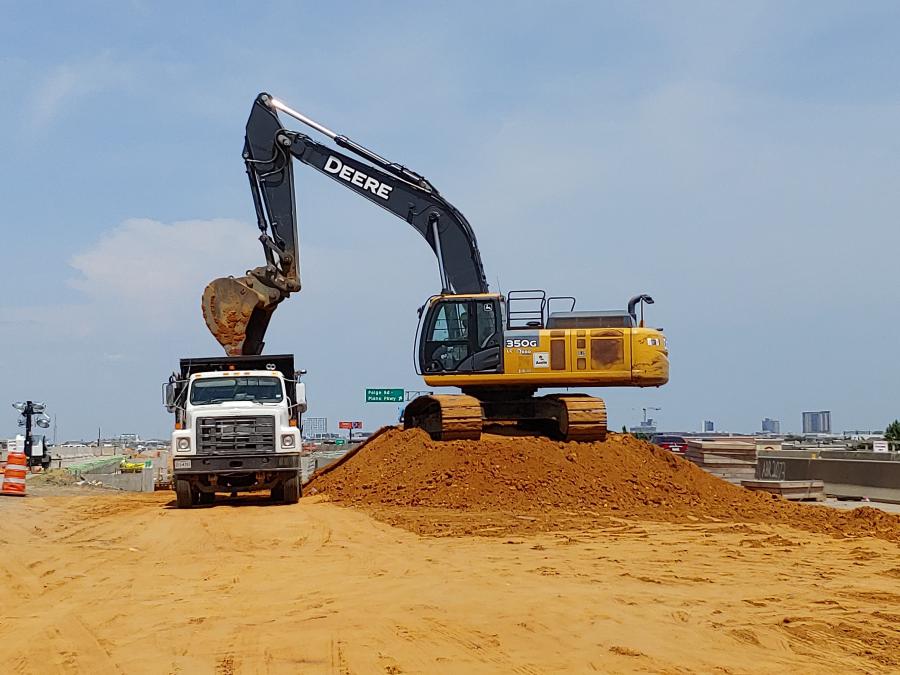 Close to 600,000 cu. yds. of dirt will be moved to complete the entire Sam Rayburn Tollway corridor.

"This is really a low volume, when it's considered over 27 miles. Because limited space is available to actually widen the existing roadway, volumes of dirt are relatively low."

Excavators, dozers, loaders, motorgraders and rollers are being used to complete the majority of the work on the project. Cranes, various support equipment and manlifts are utilized by structure crews. In addition, 80,000-lb. drill rigs and rough-terrain cranes are needed or drilled shafts. Concrete and asphalt pavers along with their entire spread of equipment will complete the roadway surface.

"The excavation and embankment will be the most time-consuming part of the work," said Poss. "Usual production rates that may be seen on a project with a lot of real estate can be cut in half, due to limited space and allowable lane closure times. The same principle applies to concrete paving."

Poss added that while a project of this magnitude presents multiple challenges, it also will result in a tremendous sense of achievement for those involved.

"Without the dedication to safety, thoughtful planning and hard work of every member of the team, this project would not be completed."

Sam Rayburn Tollway, formerly known as State Highway 121 or 121 Tollway, extends northeasterly from Business 121 near the Dallas/Denton county line to U.S. 75 in Collin County, offering accessibility to several Metroplex destinations. According to the official NTTA website, the toll road became part of the NTTA's network in 2008 and features six main lanes and all-electronic toll collection known as cashless tolling. CEG