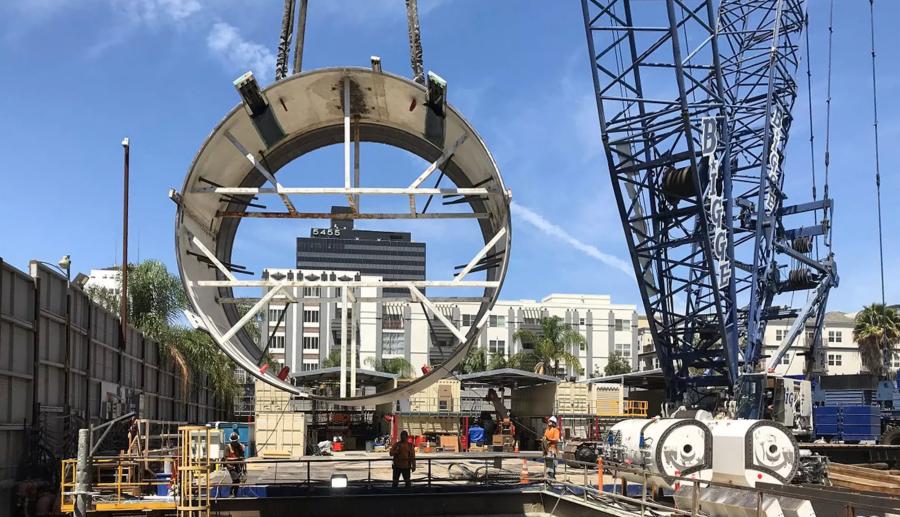 The last major piece of funding required to completion construction was awarded for the third phase of upgrades to the Metro Purple line.

The U.S. Department of Transportation will issue a $1.3 billion grant to Metro for the final phase of the Purple Line subway extension — the last major piece of funding required to completion construction.

The funding agreement, announced recently by Senator Dianne Feinstein, will cover more than one-third the $3.6-billion price tag for the third section of the Purple Line extension, which will span roughly 2.5 mi. between Century City and the Veterans Administration Campus in Westwood. The remaining funds will come from local sales tax revenue, as approved by Los Angeles County voters.

Overall — including the first two phases — the extensions will add nine mi. of Westside Purple Line (now renamed the "D Line") subway, extending from Koreatown to Beverly Hills to West Los Angeles. Subway extension sections one and two are already under construction and are slated to open in 2023 and 2025, respectively.

The FFGA was signed late in March, according to a Metro CEO Phil Washington brief, shared on Twitter:

"On Tuesday, March 17, I joined the Federal Transit Administration's (FTA) Acting Administrator K. Jane Williams and FTA officials via tele-conference to sign the $1.3 billion Full Funding Grant Agreement (FFGA) for the Westside Purple Line Extension (WPLE) – Section 3. The Congressional 30-day review period for this FFGA, as mandated by the FAST Act, ended on March 11, 2020. Section 3 of the WPLE will extend this heavy rail line from the future Century City station to the planned Westwood/VA Hospital station at a total cost of $3.6 billion.

"I want to personally thank all Metro board members and their staff for their strong and sustained support as we have worked together to advance an unprecedented four active FFGA's for Los Angeles County; and a special thanks to Metro Government Relations-Federal Affairs Team for their persistence and tenacity throughout this process. I also want to extend my sincere appreciation to U.S. Senator Dianne Feinstein, U.S. Senator Kamala Harris, our entire LA County Congressional Delegation, U.S. Transportation Secretary Elaine Chao, Acting Administrator K. Jane Williams, FTA Region IX Administrator Ray Tellis and Director for Region IX Los Angeles Office Charlene Lee Lorenzo for working diligently to ensure this FFGA moved forward in a deliberate and effective manner. We will be working with our Board of Directors and U.S. Department of Transportation to determine a suitable time in the future to celebrate this final federal funding contribution that will complete construction of the WPLE."

Following a 30-day review period mandated by federal law, the $1.3 billion grant will be delivered through a multi-year full funding grant agreement, which requires no repayment by Metro.

Construction of the Purple Line extension is split into three segments, two of which are already in the midst of construction. The seven-mile extension will include seven new stations, located in the Miracle Mile, Beverly Hills, Century City and Westwood. The three sections are expected to open in 2023, 2025, and 2027 — one year prior to the 2028 Summer Olympic Games.

According to Metro, the Westside ranks as the second largest job center in the Los Angeles area, with more than 300,000 commuters traveling to the area each weekday. Metro anticipates that the full extension will generate approximately 49,300 daily riders on its own, and result in approximately 78,000 new daily trips on the full Metro rail system.

"Los Angeles is in the midst of a once-in-a-generation moment for public transportation," said Los Angeles Mayor Eric Garcetti in a statement. "The idea of linking the Westside to Downtown is no longer a distant dream, but a reality that's within our grasp."