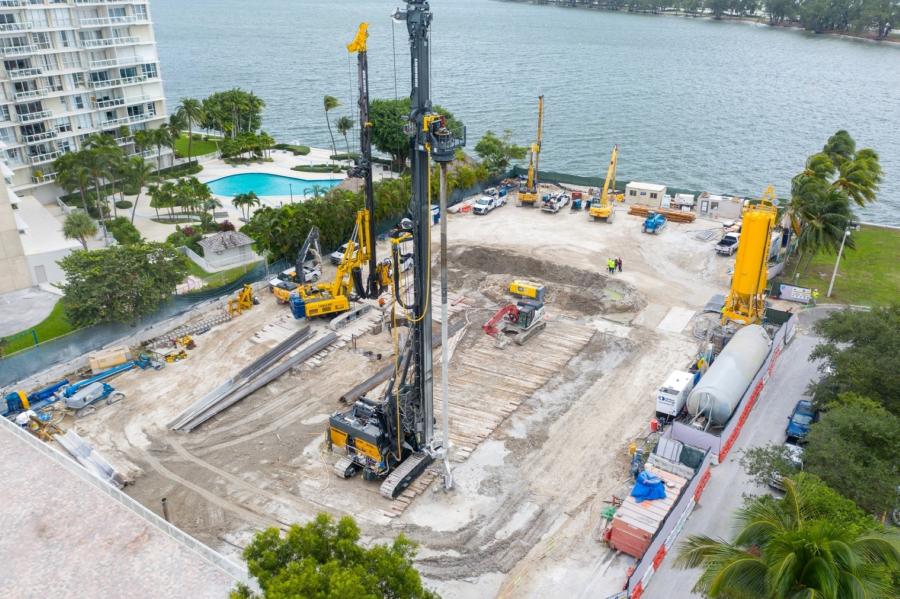 Since October, two breaches of the water table have occurred at the site, located at 175 SE 25th Rd.

The garage is beneath the Una Residences luxury condominium tower in Miami's Brickell neighborhood. Local developer OKO Group proposes a 47-story residential tower at the site, with units starting at $2 million. It also will include a three-level basement, which the developer touts as "Miami's deepest, most expensive underground garage."

However, since October, two breaches of the water table have occurred at the site, located at 175 SE 25th Rd., and residents of neighboring properties have voiced their concerns about the impact the breaches could have on their buildings, especially in the wake of last summer's deadly Surfside condo collapse.

An aerial view of the evacuation site Nov. 16 showed the pooling of water in a different section of the cavernous pit where water bubbled to the surface on Nov. 12 in a second breach.

A spokesperson of Miami-Dade County's Department of Regulatory & Economic Resources (DERM) told WPLG-TV Local 10 News in Miami that the water "will keep coming into the site" until engineers fix "what's known as the tremie seal." The agency considers the issue to be an operational one rather than an environmental violation.

Those same officials noted that Nov. 12's breach was capped by engineers Nov. 17 and a stop-work order on this project was issued. Currently, three engineers have been brought in to evaluate what impact, if any, the project is having on surrounding properties.

This will include a geotechnical engineer, a structural engineer and a seismic testing engineer. Miami Commissioner Ken Russell said this was being done as a precautionary measure and that the building department will cover all costs and the trio of engineers will report their findings to the city.

Mandy Karnauskas lives in Brickell Townhouse, next to the Una Residences under construction. In speaking with WPLG-TV, she said the second upwelling of water at Una happened one day after her management company sent residents an e-mail saying that their structural engineer claimed their property is experiencing impacts from the construction site's first breach in October.

The management company claimed the project is causing soil erosion, which has caused the brick pavers in their tiki hut area to shift.

"We see the ground actually moving, a piece of our property is sinking, and our little tiki picnic huts are starting to keel over," Karnauskas said.

Ant Yapi, of Civic Construction in Miami, the general contractor of Una Residences, has stated that "our team is remediating these leaks as they happen, and there is no evidence of impacts on surrounding properties."

Experts Call for a Thorough Exam of Site

"I think it is a very good idea to pause and check the situation," said Shimon Wdowinski, of Florida International University's Institute of Environment. He is an expert in land subsidence, sea-level rise, sinkhole activities, wetland hydrology, earthquakes and other natural hazards.

Wdowinski explained that the geotechnical engineer at Una Residences will "deal with the earth underneath the buildings" to "evaluate the property of the soil at the building site or next to the building site to see if there were any changes to the soil."

In addition, he said the role of a structural engineer would be to evaluate if there is "any damage to the buildings" with an analysis that would consist of "looking [to see] if the columns or the walls or any new cracks formed in the building, [and] to see if there were any changes to the building itself."

A statement from Civic Construction reads in part, "As is the case with any high-rise development in south Florida, our team has experienced a series of minor leaks during the excavation process. The source of these leaks is the water table, which does not interact with Biscayne Bay or the drinking water that comes from the Biscayne Aquifer.

"Our team is remediating these leaks as they happen, and there is no evidence of impacts on surrounding properties. Because the water table spans across South Florida, water intrusion of this nature is common during the early stages of high-rise developments in the region. We anticipate that additional leaks may take place as construction moves forward."

In a letter to some nearby residents obtained by Local 10 News on Nov. 16, Miami-Dade County DERM Director Lourdes Gomez noted that "the ground we live on in Miami-Dade County is very porous and it contains groundwater. Therefore, when excavating [here], it is common to encounter the groundwater table as you excavate down into the ground." She added that contractors will commonly try to mitigate against the amount of groundwater they encounter by "sealing or grouting the ground…before they start the excavation."

Builders also will use a dewatering technique, she wrote, that involves pumping out any water that does seep in "to help keep the area dry while they conduct their work" which includes when they form and pour concrete.

"Unfortunately, in this specific case, it appears that the work to seal the ground at the excavation has not worked adequately and they have had groundwater seeping into the evacuation area," Gomez noted.

According to city building records, DERM inspectors on Nov. 15 reported that with water continuing to enter the site, a holding pond was made with backfill soil to limit flooding.

Challenges of a Project in a Shallow Water Table

Rachel Silverstein, of Miami Waterkeeper, said, "It is very difficult to do construction underground in south Florida because we have very porous limestone rock beneath us. We also happen to have a shallow water table. You only have dry rock for a short time before you hit the water, so it can be very complicated to construct underground parking here in Miami."

This is one of the reasons, she said, that you do not see basement construction in south Florida homes like in other parts of the country.

The Una Residences underground garage may consider itself the deepest, but building subterranean garages is common for Miami, said City Commissioner Ken Russell, who pointed to the recently completed underground garage at Brickell City Center.

"It just has more challenges here in Miami with porous limestone and aquifers and bodies of water," he said, adding that as long as it has been deemed "safe" the city will continue to permit these types of projects.

As it happened, the groundwater breach in October occurred on an evening when Local 10 News meteorologists said south Florida experienced seawater coastal flooding. In addition, a full moon helped to create the King Tides phase in the third week of November.

Extra Scrutiny in a Post-Surfside Era

Some residents in nearby Brickell buildings said they are concerned about another incident like the Surfside condo collapse. Wdowinski recently published the findings of his groundbreaking research into the June 24 catastrophe that killed 98 people. Analyzing space-based radar data, the FIU researcher "identified the 12-story Champlain Towers South condominium as the one place on the east side of the barrier island where land subsidence was detected from 1993 to 1999."

He added that "land subsidence in and of itself likely would not cause a building's collapse." But, in a post-Surfside era, Wdowinski said it is understandable that there would be extra scrutiny from nearby residents and city building officials related to soil foundation and the structural integrity of buildings and projects along our coastline.

"What happened in Surfside...put everybody on alert and justifiably so because we don't see situations like that — it was scary," he told Miami's Local 10 News station.

Wdowinski added that another lesson learned from Surfside is the importance of monitoring buildings after they are constructed.

"I think that if we learn something from the Champlain Towers South, it is that it is not enough to check it when they do these buildings, but also afterward," he explained. "We need to continue monitoring these buildings, especially when [they age]."