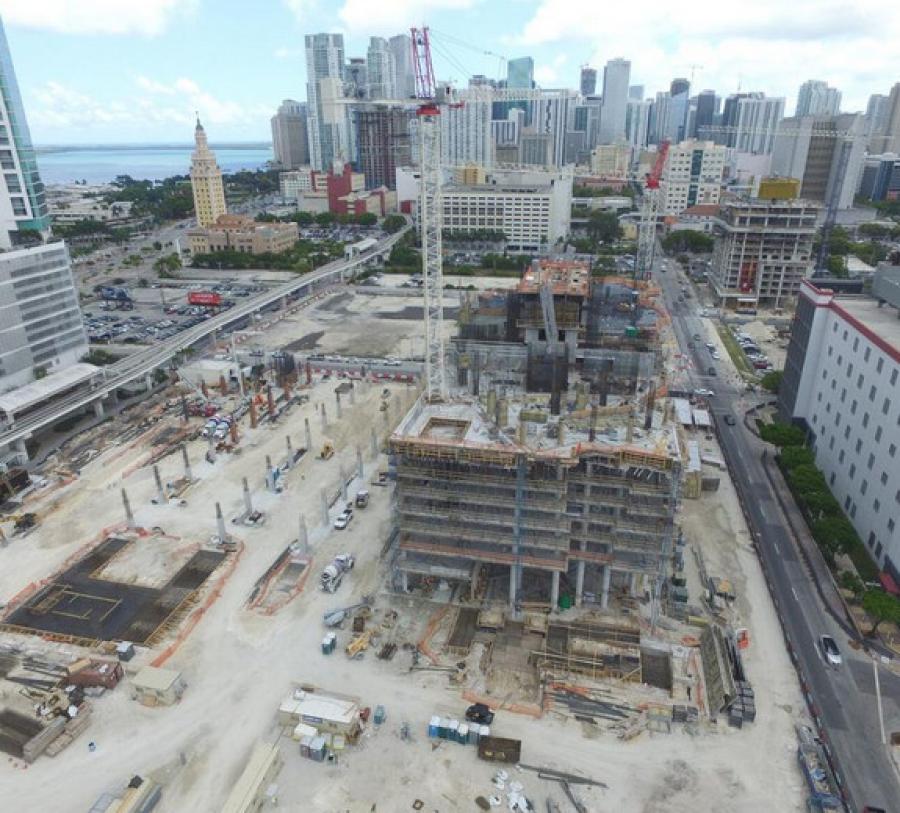 South Florida's largest construction site is running on all cylinders — with two residential towers rising fast; more than 140,000 sq. ft. of retail space now under construction; and more than 800 workers active on the job site each day.

Now, for the first time, the developers bringing Miami Worldcenter's master plan to life are providing detailed timelines for construction — with the development's first projects now under construction coming online as early as this year:

“Miami Worldcenter's master plan has been in the making for more than a decade, and we're only months away from our first tower opening its doors,” said Nitin Motwani, managing principal for Miami Worldcenter Associates. “From this point forward, we're going to see a steady stream of project elements delivering to market — residential, retail, office and hotel — as our vision for a 'city within a city' in Downtown Miami becomes reality.”

Building a project of this scale is no small feat. Nearly 4,000 construction workers have been hired to date, with more than 800 people working on the site each day — with more on the way. Approximately 75 percent of all workers reside in Miami-Dade County. Additionally, the project is bringing privately-funded infrastructure upgrades totaling $100 million.

Construction of Miami Worldcenter coincides with the launch of Brightline's rail service into Downtown Miami, which will bring passenger trains to the city's urban core for the first time in more than a half-century. Miami Worldcenter's adjacency to Brightline's Miami Central station — which provides a central hub for Tri-Rail, Metrorail and Metromover — makes the project the largest and most-connected transit-oriented development in South Florida.

“Today's consumers are looking for convenience and connectivity, and Miami Worldcenter delivers on both,” said Nathan Forbes, managing partner of The Forbes Company. “We see strong demand for a pedestrian-friendly shopping, dining and entertainment district that will be home to premier brands and inviting public spaces flowing seamlessly with surrounding streets and nearby transit options. Once complete, Miami Worldcenter will become the perfect confluence of arts, culture, entertainment and transportation.”

“It has been nearly a decade since Downtown Miami's central business district welcomed a Class AA office tower of the size and scale that we plan to bring to Miami Worldcenter,” added Hines Senior Managing Director Michael Harrison. “The quality, location and accessibility of this building will be appealing to a wide range of tenants and ultimately, we feel this will be the premier office and mixed-use tower in Miami.”

Occupying 27 acres in the heart of downtown Miami, Miami Worldcenter is one of the largest private real estate developments underway in the United States. The ten-block project, now under construction, will include world-class retail, hospitality, commercial and residential uses in the center of Miami's urban core. All told, the project is expected to account for $2 billion in new investment in Downtown Miami.