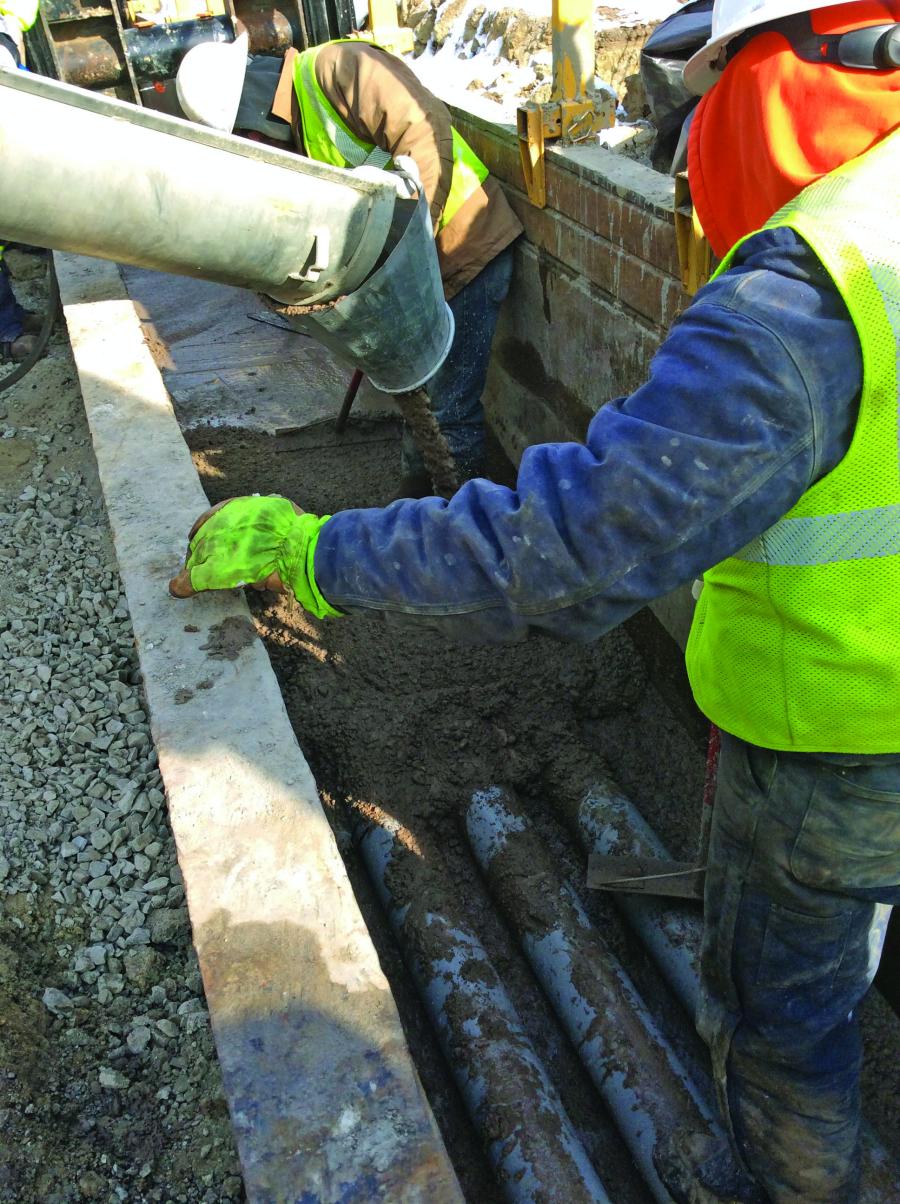 Hydacker-Wheatlake pours the concrete right against the sides of the slide rail panels, eliminating the need for forms.

Recently, Hydaker-Wheatlake headquarted in Reed City, Mich., was low bidder on a project to install a hi-voltage duct bank line for Consumers Energy.

The duct bank consists of 10 ft. (3 m) lengths of 4-in. (10 cm) diameter HDPE electrical conduit encased in concrete. When finished, the duct bank will connect Michigan State University's power plant to a new electrical substation. The new utility will be part of the infrastructure supporting the Facility for Rare Isotope Beams (FRIB) that is currently under construction at MSU.

The conduit line is being installed at an average depth of 10 ft., which requires a trench protection system. With many trench shoring options possible, Jeff Wray, Hydacker-Wheatlakes's project manager, contacted the shoring professionals in Efficiency Production's special operations shoring division.

Tim Hurst, Efficiency's shoring specialist, was the first to talk to Wray.

“After seeing that Hydacker-Wheatlake were digging a long trench in very wet soil conditions, I suggested our slide rail system in a linear multi-bay configuration, which would allow the contractor to use a set number of components, and then reuse them again and again — a big cost-savings advantage to the contractor,” Hurst said.

“We discovered that by applying a release agent, the field crew could pour concrete right against the sides of the slide rail panels; no extra forms necessary,” Wray said. “When the concrete is dry, we pull the panels and posts and then leapfrog the same components to the front of the trench.”

Wray also mentioned that the service he received from Efficiency Production and Tim Hurst was exemplary.

Efficiency's slide rail is a component shoring system comprised of specialized steel posts and panels. The versatile system can go 32 ft. (9.7 m) deep in a variety of configurations, such as small four-sided pits; large unobstructed excavations as big as 60 by 60 ft. (18.2 m) or more with in a ClearSpan configuration; or in a Multi-Bay configuration to install tanks and other structures, or lengths of pipe over 40 ft. (12 m).

slide rail panels are installed into rails on the posts — an outside slotted rail first, then an open-face rail on the inside — then the panels and posts are incrementally pushed down to grade as the excavation is dug; a process commonly referred to as a “dig and push” system.

Along the duct bank route, Hydacker-Wheatlake is using slide rail to install pre-cast personnel-access junction chambers. The company is utilizing the slide rail components in a 4-Sided Multi-Bay configuration. This configuration allows for a much larger obstruction-free space to set the chamber's footer, riser sections and cap.

The duct bank was scheduled to be completely installed by July 2016, but the very wet ground conditions was a challenge throughout the project.

“Water is a big problem and is slowing us down, but I can't imagine how even slower it would be with any other type of trench shoring,” Wray said.