The project is part of a $2.5 billion plan that will add additional lanes and a diamond interchange to the three midtown highway sections. 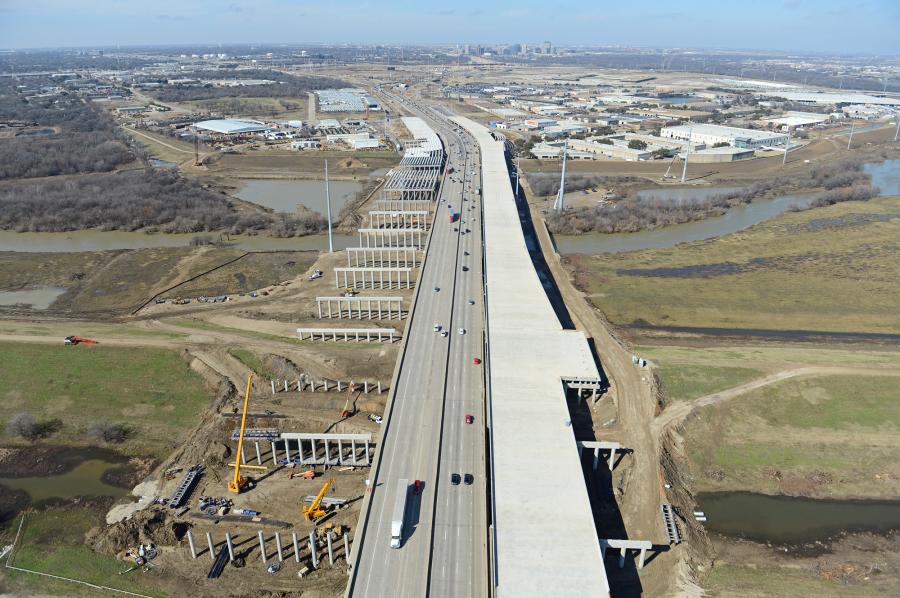 The $847.6 million Midtown Express project will rebuild and improve portions of much-used Texas state highways 183 and 114 and Loop 12 in the Dallas, Ft. Worth and Irving areas.

Capacity of the highways will be increased through construction of a TEXpress toll managed lane in each direction, except on SH 114 from SH 161 to International Parkway where one toll lane will be constructed westbound.

The project includes rehabilitation of 44 bridges and construction of 28 new bridges.

Construction of Midtown Express, also known as the managed-lanes project, began in spring of 2015 and is expected to conclude in late 2018.

Midtown Express is an interim project that will increase vehicle capacity on the heavily-used midtown highways. It is part of a $2.5 billion plan that will add additional lanes and a diamond interchange to the three midtown highway sections.

Funding has not yet been identified for the $2.5 billion amount.

The current roadway dates back to 1959 and has remained relatively unchanged since 1973 when an additional main lane was added in each direction.

Bridges along the highways will either be widened or replaced. That includes construction of new SH 183 Trinity River bridges.

Funding for the project comes from state and federal sources and a pending Transportation Infrastructure Finance and Innovation Act loan.

“We applied for a TIFIA loan,” said Lisa Walzi, public information officer for the Texas Department of Transportation.

Bridge work continues including construction of the Trinity River bridges.

A widening of a SH 114 bridge over O'Connor Boulevard is nearly complete. Final pavement on SH 114 has been placed from Belt Line Road to Dallas-Ft. Worth Airport.

Also, utility relocations on SH 183 through Irving are 60 percent complete. Deck pours on eastbound SH 183 over the Elm Fork on the Trinity River have been completed.

The project team has been placing girders, pouring bridge decks and painting direct connections between SH 183 and Loop 12.

They are constructing bridges and walls at all major intersections in Irving and Euless.

Loop 12 ramp closures are in place to facilitate the start of new direct connector construction. Major traffic switches have taken place on northbound and southbound Loop 12 between I 35E and SH 183.

Substantial completion of Loop 12 direct-connect bridges is scheduled for fall 2018.

So far, construction crews have set 800 of 1,887 bridge girders in place for the Midtown Express project. The contractor expects to set more than 1,000 girders this year.

Today the highway serves as a primary artery between Dallas and Fort Worth. But with the current roadway 58 years old, it is no longer considered adequate to meet the demand of 150,000 to 170,000 vehicles per day. SH 114, also known as the Northwest Parkway, has been the site of major development for almost half a decade, especially in Dallas.

Planners expect to increase the capacity of SH 183 and portions of SH 114 and Loop 12 with the addition of the toll-managed lanes.