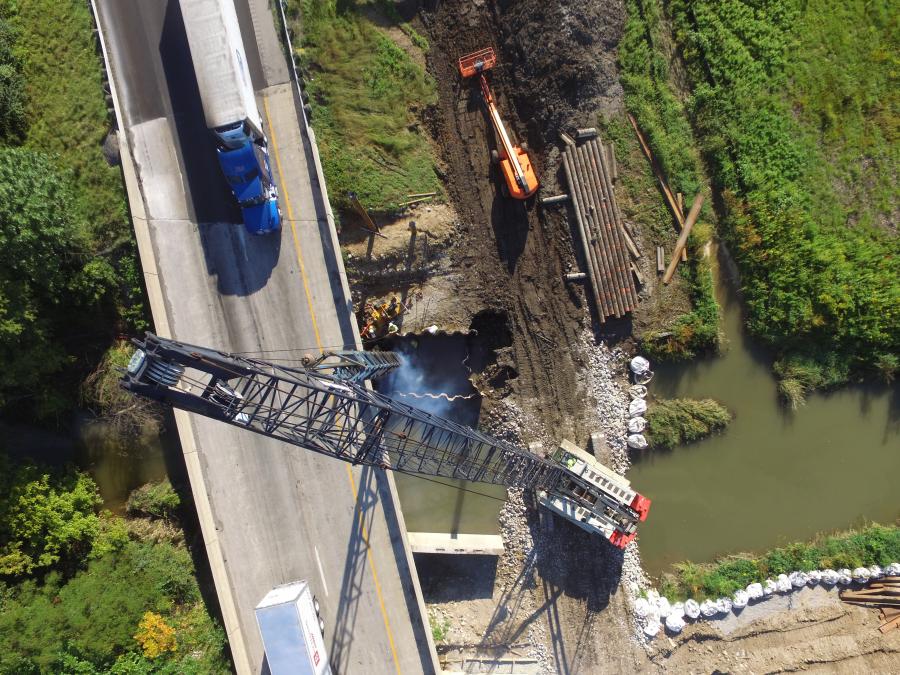 The $92 million widening and rehabilitation project of 15 mi. (24 km) of Interstate 69, part of the Indiana Department of Transportation (INDOT) Major Moves 2020 program, will be completed in November 2017.

The $92 million widening and rehabilitation project of 15 mi. (24 km) of Interstate 69, part of the Indiana Department of Transportation (INDOT) Major Moves 2020 program, will be completed in November 2017. Crews from Milestone Contractors L.P. are making steady progress on the highway northeast of Indianapolis in Hamilton and Madison counties.

The design-build project, which broke ground last April, is being financed by INDOT and the Indiana Finance Authority. The work is adding a third travel lane in each direction (north and south) to the median between state Road 37 (Exit 205) and state Road 38 (Exit 219) and is adding a southbound lane along the shoulder between the 116th Street entrance ramp and the future 106th Street exit ramp.

Other elements include rehabilitating existing bridges such as Brooks School Road and Madison County Road 650W bridges and widening of the Campus Parkway bridge, the reconfiguration of the Campus Parkway interchange (Exit 210) into a double crossover diamond design to improve traffic flow, the rebuilding and lowering of the state Road 13 (Exit 214) pavement under I-69, and upgrading of various pavements and drainage structures.

Noise barriers also are being placed along I-69 near exits 210 and 214 to mitigate the impacts on adjacent properties due to the additional travel lane.

The decision to install noise barriers was made following a study of the existing and anticipated noise levels that was then subjected to “reasonable and feasible” analysis, according to the project website.

This section of road was completed in 1971, with most of the bridges built between 1962 to 1966. It currently handles an average of 65,000 vehicles daily, and when the work is done, will be able to increase traffic capacity by 50 percent with the third lane.

“Northeast of Indianapolis is a rapidly developing area of Indiana that has seen tremendous growth,” said Nathan Riggs, information director, INDOT East Central District. “Likewise, I-69 traffic volumes have increased as this is a primary route for daily commuters — in addition to interstate passenger vehicles and freight traffic sharing the route. Adding a third lane will increase safety by increasing the capacity of the highway. An additional lane also allows greater potential to maintain traffic flow in the event of a traffic incident. Currently, when a crash occurs with only two lanes, it can quickly create significant backups, which increases the probability of a secondary crash.”

The road system is being designed by United Consulting as part of Milestone's Design Build Team.

“One of the benefits of the pavement design is that it puts the new pavement and the existing pavement on the same maintenance schedule,” said Riggs, “which is better for the taxpayer and more convenient for the many motorists who use this route.”

The work will impact traffic, but efforts to minimize it are being made via night work to speed up the construction. Two lanes will remain open during peak daytime travel times on I-69.

“The speed limit on I-69 through the work zone has been reduced to 60 miles-per-hour and is further reduced to 50 mph when workers are present,” said Riggs. “Construction at the Campus Parkway interchange began on July 5. The first phase of construction prepared the public for shifting traffic into a double-crossover diamond configuration, which will improve traffic flow during widening of the bridge and construction of the permanent improvements. We're using message signs and social media to communicate delays and alternate routes to motorists as the construction proceeds and various land closures are implimented.”

“We did the asphalt overlay of the existing southbound lanes and started widening the third lane in the median on the south end working north,” he said. “We've paved three miles and have another five miles to do, as well as five miles of barrier wall. We can't pave in the winter, but we'll be doing some pipe work and bridge work and installing two of the sound walls.”

Thirteen bridges — short spans — are either being widened, overlayed or re-decked, including four sets of twin bridges that cross creeks. The other five cross roads.

“The widening is taking place in the middle,” said Nagle, “which gives us enough room to shift traffic so that we can maintain two lanes on each side and do the bridge overlays.”

While most of the construction challenges were anticipated, the rain that hit the work site last August and September were not expected.

“The rain hurt all the road construction business in Central Indiana,” said Nagle. “It really slowed us down, but we extended our hours from 10 to 12, working all the daylight hours and on Saturdays. We're catching up and we're enjoying better weather in October and November than we expected. Everything is balancing out.

“All the paving/overlay work was done at night and we set up our barrier wall at night,” he said. “For anything that we have to restrict the interstate down to one lane, we have between 9 p.m. and 6 a.m. to do it. This includes the installation of bridge beams and paving that we'll be doing next year. Up until mid-October we had a night shift crew every night.”

Three fields at three of the interchanges along the worksite are being used to store equipment, materials, as well as medians at various sites. Milestone's field office is located half-a-mile from the project in a rented building, which also houses INDOT.

Milestone's asphalt plant, which is supplying the 400,000 tons (362,873 t) of asphalt for the road work, is close to the site and Irving Materials Inc. (IMI), the concrete supplier, has several plants in the surrounding area.

On a peak day there are close to 75 Milestone workers and subcontractors, who are spread over 10 mi. at multiple sites.

“We've got a couple of bridge, dirt and road crews going,” said Nagle. “I go out every day, as much as I can, to talk with the guys and see what's going on and find out what we need to anticipate. We have a superintendent with each of the crews. Chad Scott, our construction superintendent, manages and schedules the majority of the work on site and he visits the crews daily.”

Milestone submitted its bid for the contract in September 2015 and received the contract in January, giving Nagle and his staff three months to prepare the initial plan of attack. Fortunately there are no major utility issues to deal with and the contractor is responsible for any utility work that will occur.

“All the underground utilities are deep and the overhead lines are all out of the way,” said Nagle. “We have to put in some new service points for some lighting — that's the extent of our utility work. This is really helping us meet our schedule.”

The general contractor's main shop/yard is on the other side of Indianapolis and during the day mechanics are sent as needed, but at night, a mechanic is on site to deal with any issues that might arise as the shop is closed.

“We haven't had a lot of issues with equipment,” said Nagle. “We've been pretty lucky in that department. Most of the repairs can be done in an hour or two.”

Nagle, who has been with Milestone for 10 years, said that the major lessons being taken to heart are how to manage a project over a large area.

“We've put a lot of people on the job,” he said. “Access is always an issue and you're always learning different ways to get in and out. We're working in the middle of the interstate, and with traffic on both sides of us, just getting equipment, trucks, and people in safely is a constant challenge. We have state police presence and they're pulling drivers over all the time for speeding.”

Nagle is impressed with the original road work.

“The original concrete pavement is still holding up when we get down to it,” he said. “It's in good shape as you can expect for it being over 40 years old and it has been overlayed with asphalt several times and patched. We've had a couple of potholes here and there that we had to fix, but that's it.”