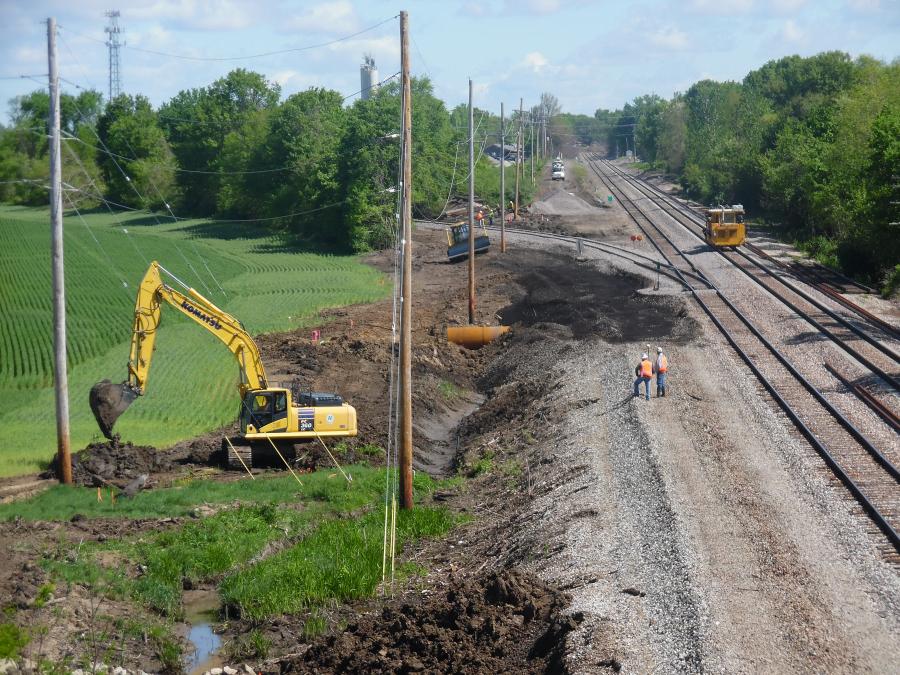 “The upgrade is for Amtrak,” said Kellan Comte, Millstone Weber's project manager for both contracts. “They're doing upgrades on the entire corridor. We had four of the contracts and these last two are adjacent to each to each other.”

The majority of the $1.9 billion plus St. Louis-Chicago rail upgrade is primarily funded by the federal government's high speed rail program, which is replacing track and adding around 56 miles of new track to create more double-track sections. Other aspects include installing fences for one-third of the route and upgrading 234 of level crossings.

A 2015 breakdown of the costs had $757 million allocated for track and infrastructure, $218 million for level crossing upgrades and $414 for rolling stock. Union Pacific owns and runs most of the line between Joliet and St. Louis.

The Tier 1 work covers 23 mi., and consists of installing new rail. Railworks is installing 15 mi. of new track and Collins & Hermann is installing 35,000 ft. of fence. Red Ants is installing new jack and bore culverts under the tracks, and Millstone Weber is performing the grading, base rock, bridge work, level crossing upgrades and retaining wall work.

Assisting Comte on this section are Superintendents Keith Klocke and Frank Mullen and Field Engineers Colton Kiefer and Josh Behrens.

“There is single rail there right now and we're adding a secondary one,” said Comte. “There is also a bridge replacement, a half-mile long retaining wall that had to be built in the Town of Brighton — in the middle of the project — and a lot of culvert work to be done to modify the existing drainage along the corridor.

“We had 15 mi. of grading work on both sides of the existing tracks. This work has its challenges because there is not a lot of right-of-way and you had a limited amount of space to work in. Then you had to get all the new rock sub-base — about 250,000 tons that had to be put down for the new track and 15 miles of access roads.”

The existing tracks had 2.5 mi. of double track on the south end and another two-mi. section on the north end. These are being replaced as well. Union Pacific's electrical department is installing the electrical systems, wiring, and signals for the level crossings and track infrastructure.

The Tier 5 work covers 28 mi. and started January 2017 and will be completed in December 2017 with Millstone Weber performing the grading, base rock, bridge work and level crossings; Collins & Hermann installing around 50,000 ft. of fence; and the Red Ants installing new jack and bore culverts under tracks. On this section, Comte has Bob Scanlon, superintendent, and Nick Hilton, field engineer, assisting him.

For the Tier 1 section, a 59-ft. single-span was demolished and replaced. On the T5 section, a new bridge deck at the north end in several stages and another bridge had a handrail installed. The whole rail line was shut down for a week, which gave Millstone Weber seven days to have crews work two, 12-hour shifts per-day to get it done. This closure impacted the Tier 1 and T5 project.

Railworks is using dump trucks on the rail to help install the new track. All the new track material is brought in by rail, including track, ties and ballast.

Because of the high frequency of freight travelling along the corridor's mainline track throughout the day, as well as the Amtrak trains, working along the tracks can be difficult.

“We're required to stop working when there is a train within our work limits,” said Comte, “which can make things a little more difficult. Union Pacific is on-site and they let us know when trains are coming into the areas. The work stoppages can range from five minutes to 30. Union Pacific tries to give us as much time as possible to keep working to get the job done.”

The new track is laid down in stages, starting with the ties, followed by the rail. Lastly, crews lay down the rock. Railworks is the subcontractor installing the new track.

“We can range from 1,000 rails ties a day and 3,000 feet of rail per-day,” said Comte, “and the amount of rock varies — the grading and sub base work takes the longest time. We lay down new track pretty quickly.”

Crews have been working year-round — Monday to Friday, 10-hour shifts, with a few stops due to cold weather in the winter months.

“Recycling is very important to our company,” said Comte. “We recycle everything that we can to limit the amount of waste going into a landfill. All of the existing rail that is being removed, is being recycled along with the majority of the existing ties.”

The company's Komatsu PC490LC-11 is equipped with a convertible MKT model V-5Esc vibratory pile driver with removable Rototilt and side clamp.

The company's main office/yard is an hour away and mechanics are sent when called in.

“Most of our equipment is steel tracked,” said Comte. “We have quite a bit of flat tires due to the old railway spikes and the ballast track. Our equipment is in pretty good shape. Repairs are usually done on the same day, unless it's something major and we have to wait for parts to show up. We have a lot of parts in stock and our suppliers are close by.”

Comte is able to easily transfer crews and equipment to either project to ensure that schedules are met.

Millstone Weber purchases equipment from dealerships such as ERB Equipment Company, Fabick CAT and Roland Machinery — all in St. Louis.

Having overseen many rail projects, Comte knows that Millstone Weber crews can get the job done.

“You always learn something from every project,” he said. “You take what you're given and make the decisions to complete it. While a lot of the work is the same, we find ourselves in new locations with their own challenges, but we know what the basic problems are and how to resolve them. I've worked with officials from many rail companies and we know what they are expecting —they want a quality product and that is what we deliver.”